In the cases we have initiated, do not call witnesses for the defense or assign the expertise they have requested. Ilze Znotiņa, the head of the Financial Intelligence Unit (FIU), has conveyed such a message to Latvian judges, prosecutors and representatives of law enforcement institutions. The scandalous instruction, which is in conflict with the Constitution of the Republic of Latvia, was said during online training organized by FIU.
08.12.2020. Imants Vīksne

The two-day seminar was organized at the end of October for a limited number of people - about 330 participants. The main topic of the training: “Preventing and combating money laundering is a national priority. The most significant predicate crimes that pose a threat of money laundering are corruption and bribery, tax evasion, illicit trafficking in excisable goods and drugs, and crimes against property." The purpose of the training, on the other hand, according to the statement posted on the website of the unit, was to form a common understanding of the course of proceedings. Examining situations in practice where the opinions of the Financial Intelligence Unit and investigators, investigators and prosecutors, as well as prosecutors and courts differ on the amount and sufficiency of evidence in money laundering cases. "Therefore, together with knowledgeable lecturers and practitioners from the Prosecutor General's Office, the State Police, the Financial and Capital Market Commission, the University of Latvia, the Financial Intelligence Unit and foreign lecturers - Yehuda Shaffer, an independent consultant and Israeli Financial Intelligence Unit director, and Stefan D. Cassella, director of consulting firm Asset Forfeiture Law, LLC and a former attorney in the U.S. Department of Justice, tried to find answers to the uncertainties."

Her priority is speed

Among the lecturers, in addition to the overseas sages, there was also the head of FIU Znotiņa, and the video recording of her performance has become available to the agency LETA. Apparently because not all trainees found the country's main financial intelligence lessons acceptable.

Here is what Znotiņa said:

I hope that more and more judges will realize that you will be in a very big deadlock in the field of money laundering if you start, for example, summoning a huge number of, say, witnesses or asking for some huge amount of expertise that must, of course, be done if we are talking about accusations.

Znotiņa has pointed out that in these issues it is extremely important that the court proceedings are fast. "So that not only, on the one hand, do we withdraw illegal funds from the economy, but also because this is, of course, a very serious threat and such a restriction from the point of view of human rights to the person we suspect and whose funds we are detaining.”

It is clear from Znotiņa’s quotes that the prosecution must use all available attack resources to the maximum, while the defense must devote the minimum of resources in order to ensure the fastest possible trial. The priority, therefore, is speed, not the quality of the process, and such an approach may in essence contradict the guarantees established in Article 92 of the Constitution:

The reverse presumption of innocence

In cases started by the FIU, the presumption of innocence works in reverse. Namely, property is considered criminally obtained if it is not proven that it was obtained from legal income. Thus, in the process, it is not for the police and the prosecutor's office to prove the existence of a predicate crime and the fact that the seized money is illegal, but for its owner - that it is legal. But if the defense is denied the right to call witnesses or to carry out accounting examinations, then it is not possible to rebut the legal presumption of fact.

Neatkarīgā’s source in the prosecutor's office explains that undeniably there are such cases when the trial is clearly delayed, inviting more and more new witnesses, waiting for the statute of limitations. However, such cases should not be generalized on the assumption that everyone on the defense side, including lawyers, is cheating.

After the video recording of the FIU-organized training was leaked, the agency LETA asked for a more detailed explanation of Znotiņa’s statements, but the FIU refused with the following justification: “The teaching materials - presentations and what the lecturers have said - contain restricted information, including information on the work of law enforcement agencies. Consequently, in view of the above, the FIU will not provide further comments on the topics discussed in the training and the statements made by specific lecturers.”

Whoever is not with us is against us

Neatkarīgā also asked for a comment from the Supreme Court on Znotiņa’s instruction given at the training seminar and received a similar refusal:

"The Supreme Court sees no reason to comment on the opinion expressed in the training, because in the training information is provided to a specific and limited circle of persons in a specific discussion platform, moreover, each participant has the opportunity to express an opinion and discuss what the lecturer said. The Supreme Court considers that in such a situation it is incorrect to transfer the discussion from the classroom to the media.”

However, not everyone agrees with this, and it is clear that the statements of the head of the FIU have resonated widely on both sides of the trial. In the near future, Znotiņa’s findings will be considered at a meeting of the Latvian Bar Association, and, as the head of the association Rihards Bunka predicts, they will probably be condemned as well. The Board of the Latvian Association of Judges, on the other hand, already considered this issue on Friday. It also promised to comment on the decision later.

The FIU guidelines and the change in the conduct of judges, if any, will have the most direct impact on the work of lawyers. Most do not risk getting involved in a public debate with Ilze Znotiņa. Lawyer Daiga Siliņa is an exception, and her conclusion: "Ilze Znotiņa puts open pressure on the judiciary, practically saying - whoever is not with us is against us." Here's her opinion: 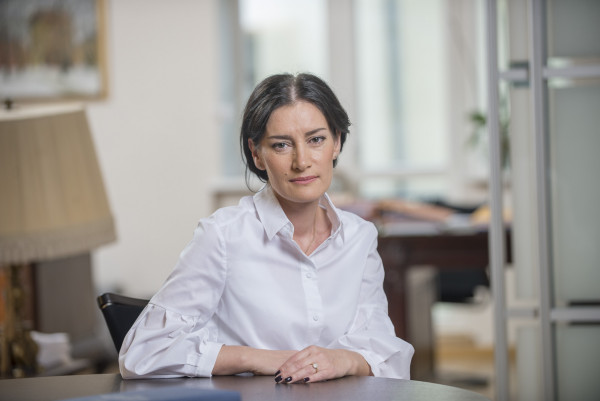 - The directness and arrogance of I. Znotiņa, the head of the Financial Intelligence Unit (FIU), is surprising. With the latest statements, I. Znotiņa has surpassed herself. Her desire to prove herself at work is understandable. A new approach, a fresh look at the order of things, only thing needed is to get the judges, who have the final say under the law, to "understand" how the court is to be judged.

As a result of the fast and efficient operation of the FIU, the number of frozen funds has increased by 504% in just 2019, now it remains to achieve an accelerated “withdrawal” of these funds, adding them to the state budget through the courts.

It is surprising how easily the FIU's allegations about the illegal origin of funds are accepted without appeal, calling for the exclusion of witness statements and expert opinions in order to speed up the proceedings. Such an approach is analogous to a policy where the existence of property and money was sufficient evidence of the existence of a crime. All that remains is to quote the revolutionary abd Soviet executioner Mārtiņš Lācis that everything is allowed, because “We are no longer sorry for them. We use an iron broom to wipe away any filth", "don't look for evidence in the case." Recent history has shown that judging cases in an "efficient, fast and correct" manner can only be done by troikas. Lawyers will not interfere in such a process either, they may not be needed at all. Evidence is no longer important, it is enough to have a revolutionary conviction and the property class of the guilty person.

I have to agree with the highly valued opinion of the legal expert Gunārs Kūtris that it is not legally justifiable to call any property of unknown origin criminally acquired. Unfortunately, as is written in the money laundering rulings that money has been obtained as a result of money laundering or as a result of an unidentified criminal offense raises reasonable doubts about the rule of law and respect for human rights.

The judiciary does not have to be subject to questionable influence by taking part in creating the "positive" statistics that "we do not have to talk about". In this way, a serious threat to human rights is created in Latvia, depriving them of the right to a fair trial, which is a flagrant violation of human rights.

If the factual and legal circumstances underlying the presumption that the funds have been obtained are not communicated to the owners of the funds in a sufficiently clear and detailed manner and their seizure is achieved through "speedy" legal proceedings, such proceedings are contrary to fundamental human rights and cannot be considered a "national priority".

I. Znotiņa puts open pressure on the judiciary, practically saying - whoever is not with us is against us. It would be important to clarify the opinion of the Chief Justice of the Supreme Court in this regard. Is the judiciary ready for such innovations.

The question remains, why were lawyers not invited to the FIU training as members of the judiciary? Maybe the laws “On Judicial Power”, the Law on the Bar of the Republic of Latvia, the Criminal Procedure Law, etc. are already being rewritten in the break rooms?

Comment
Latvian Foreign Minister: NATO membership of all three of these countries - Turkey, Sweden and Finland - is essential for Latvia's security interests
Jānis Lasmanis
Timothy Snyder and Alvis Hermanis are wrong. Russism is not fascism
BLBens Latkovskis
How to convince tourists that there is no war in Latvia?
Arnis Kluinis
Riots by Kremlin supporters are possible in Riga and Jelgava
Imants Vīksne
Institutions supervised by the Ministry of Justice have an "unhealthy work environment"
Uldis Dreiblats, Ritums Rozenbergs
The environmental and security crisis will deepen. Global threats will increase
BLBens Latkovskis