The euro is falling like the Soviet ruble once did

The euro is becoming as useless and despicable as the Soviet ruble was when little could be bought for it.
18.02.2021. Arnis Kluinis 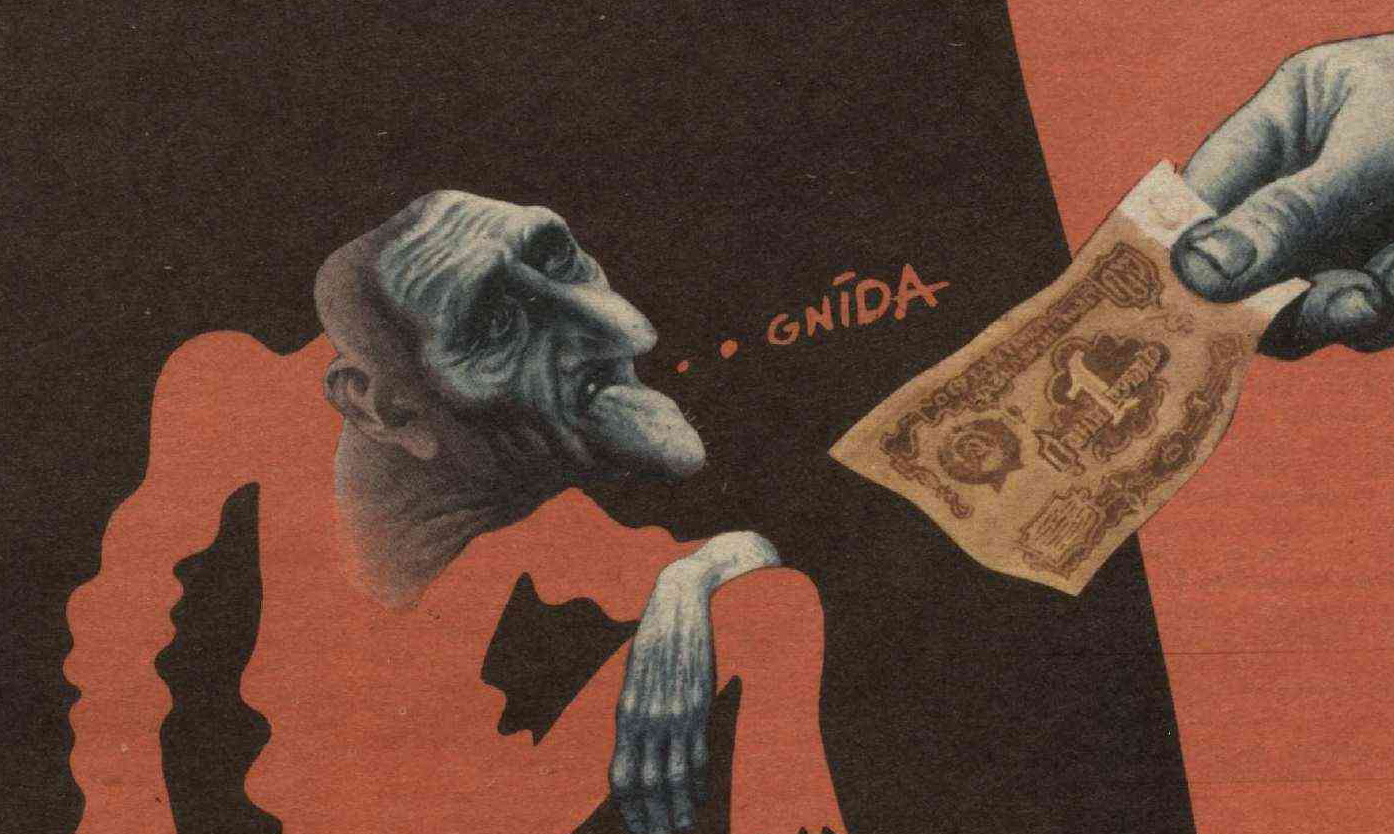 The European Central Bank continues to print the money that countries put into circulation without hesitation, i.e. by abandoning deficit constraints and the schemes that were previously used to circumvent the restrictions. Now everything can be justified with one word - Covid-19. This magic word does not prevent the inevitable increase in the prices of goods and services, in line with the increase in the nominal value of printed money, but provides additional opportunities to deny the obvious - that it is becoming more and more expensive to survive in the times named after Covid-19. Trade restrictions imposed under the pretext of Covid-19 mask the depreciation of the euro in line with the sharp rise in the prices of goods and services.

The Central Statistical Bureau of Latvia recently provided the official version of price changes in January. Changes are expressed as inflation rates. According to this, the changes have been staying on the spot. First, the change is not by percentage, but only by tenths of one percent. Second, the 0.4% increase in prices in January compared to December is at least visually largely offset by a 0.5% decrease in prices (negative inflation or deflation) in January when compared with January 2020.

If price changes are really so slow in terms of pace and uncertain in terms of direction, then buyers were not able to notice them at all. They would have to rely on the CSB, which states in the January inflation annotation that “approximately 25 thousand prices are collected every month for the purposes of calculating the consumer price index. All price information collected in January, including remotely collected prices, went through standard validation procedures. No atypical or decreases or increases that couldn't be justified by global and seasonal trends were observed. At the end of the data validation, there was also no reason to believe that the use of alternative methods would affect the dynamics of price changes or the quality of the data. Consequently, all price information collected during the survey complies with the methodology and quality requirements." The only difference between January this year and January 2020 is that “the share of prices collected remotely (using Internet resources and telephone interviews) has increased significantly. In total, around 19% of prices in January were collected using one of the alternatives (the proportion represents only those prices that would have been collected in person in the standard situation)."

I have no objections to the CSB's statement regarding the compliance of the results of price fluctuations with the “methodology and quality requirements”, but the meaning of the requirements must be understood. Namely, countries have required from statisticians and statisticians have, over the years, refined a “methodology” for measuring inflation that did not recognize real increases in the cost of living even when the ECB did not yet print the euro as fast as it does now. Neatkarīgā wrote about the manipulations in calculating inflation at that time, but now the printed money is incorporated into the actual prices of goods with new techniques that statisticians would be able to notice maybe only after 10 years. In the meantime, not only the need for these new tricks may disappear but for also statistics.

Neatkarīgā ended last year with the 30 December publication “Euro purchasing power is approaching zero” (in Latvian), illustrated by adhesive tapes over store shelves. They informed that it was forbidden to buy goods on those shelves, regardless of how much money was in people's wallets or bank accounts. At that time, the value of the euro was indeed zero for many goods and well below the value that could be calculated arithmetically based on the ratio between the value of all goods in stores and the value of goods allowed for purchase. Unfortunately, the surplus of euros that can buy bread does not protect people who are forbidden from buying socks or gloves from freezing. Some of these bans have now been lifted or relaxed, replacing shopping from store shelves with buying electronically. Okay, but in that case, how much do these goods cost? 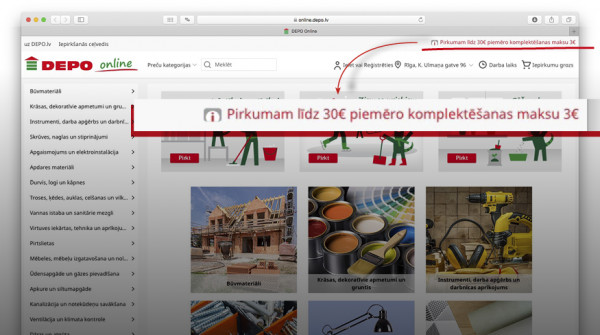 OUTSTANDING EVIDENCE of how the price of screws bought a few months ago for 30 eurocents can now turn out to be 3.30 euros / Ekrānšāviņš

Outstanding evidence of current commodity prices from the point of view of buyers, not statisticians, is provided by the hardware supermarket chain Depo, which has a warning in red at the very top of the Depo Online website that "purchases up to 30 euros are subject to a 3 euro pick-up charge". So, if a person needs screws or nails for 30 eurocents, on which Depo has a really wide variety to offer, they have to pay 3.30 euros for this purchase. In this case, should the price of screws be considered to have increased? Yes, from the buyer's point of view. No, from the CSB's point of view. Officially, inflation is zero, but 3 euros are not included in the price of the goods, they instead go into the growth of gross domestic product at the expense of the rapidly growing “pick-up” service subsector.

In many cases, people will find ways to minimize or even neutralize the effect of the "pick-up" service fee. However, even in this case, the statement of 30 December that "the poor have to pay a penalty for being poor" remains valid, while the rich are rewarded for being rich. The richer a person is, the easier it will be for them to fill a shopping cart worth 30 or more euros with things they might need someday. If a person owns a house, not a hovel, and if there is no sudden financial catastrophe, then it is not difficult to reach the threshold of 30 euros for the total price of goods needed by the household in the foreseeable future.

If a person does not want to buy anything for 29.71 euros to add to the 30 eurocents of screws, then he can organize collective shopping with neighbors in the physical space or with other enthusiasts buying together online. In this case, the actual price of 30 eurocents of screws must be assessed with the risk of the police punishing them for illegal contact with members of other households. Thus, doubts about the euro as a legal tender re-emerge if its realization requires the distribution of jointly purchased goods under the guise of a bush or at night.

The introduction of the "pick-up" service fee at Depo is not strange or arbitrary. At least in part, it includes the real costs if the store employees have to assemble and take little bags of screws to the checkout, etc. instead of the customers doing that. All stores, i.e., even Depo's competitors, have similar costs in a similar situation and have to be borne by customers, regardless of the way in which the money is collected.

In many cases, the "pick-up" service fee is only the first step in delivering the goods to a customer who is not allowed to come to the store. Outside Riga and major cities, a pack of screws worth 30 eurocents with its delivery can cost 3+5 and even more euros. Of course, the real price increase is smaller, because the base of the increase must also include the expenses the customers had to go to the store under the old system.

In the arsenal of government-hired propagandists, the Internet is a panacea that makes goods legal and affordable, regardless of government restrictions on trade. In life, this is not the case, because the Internet does not deliver products to customers if we ignore the cases where information is called a product. In all other cases, the delivery of goods to buyers requires space, which until now was store premises. Expenses for both buyers and sellers increase as the use of these premises is hampered or banned altogether.

The inability of virtual space to replace physical space is perfectly illustrated by the sad story published on TVNET on 16 February. It was told to the TV show Bez Tabu by a technologically advanced woman Sanija. She went for the ordered goods at the electronically agreed time, but: “At Prūšu Street, Ķengarags, when I was going in the store with the serial number I received in the application, a security guard stopped me and said that it was not possible to enter with the number received in the application. I must stand in the long line with 50 people outside. To wait for my turn, take a basket, print out the number from the machine and only then I can go to the cash register, where I will be served. Because they cannot serve me without a basket. So what's the point of the application?” The answer is short and blunt - there is no point. 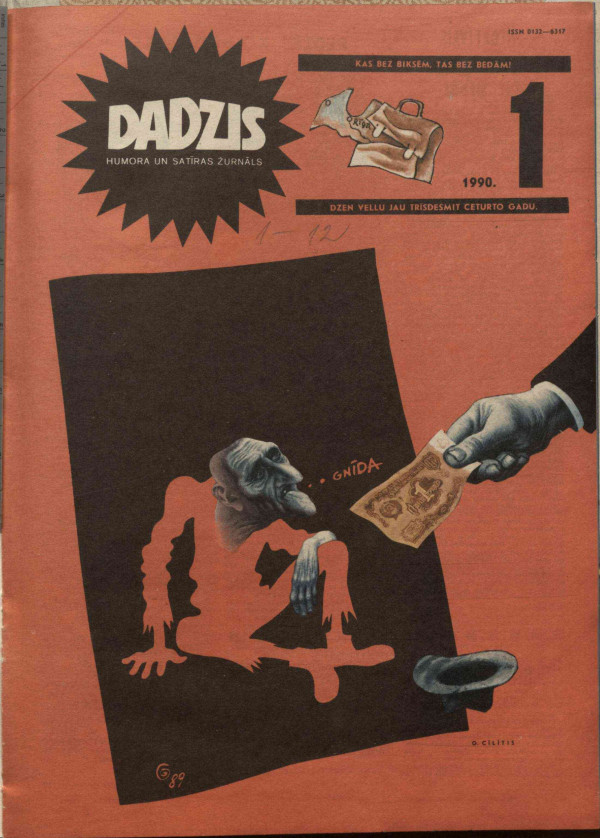 CALENDAR. Every euro user has his or her own experience to judge how far or close the euro is from the situation in which the Soviet ruble once was. Ruble's misfortunes depicted by the very talented Latvian artist Gunārs Cīlītis (1927-2007) date back to the publication of the drawing on the cover of the 1st issue of the magazine Dadzis in 1990 / Arhīvs

Due to the lines, it is necessary to return to the topic discussed on December 30 about the similarity between the current events in Latvia as a member state of the European Union and the past events in Latvia as a Soviet republic. Both then without the internet and now with the internet, people may have to spend half a day getting some household goods, because these actions can no longer be called a purchase. The time spent at these events, both then and now, deprives people of the time to make money and also deprives them of money that has to be spent due to the needs that have arisen during that time. A person cannot stand outside for hours in a line with 50 people in the winter, starving and frozen. Thus, the euro is becoming as useless and despicable as the Soviet ruble was when little could be bought for it.

Comments [1]
Director of Domina: Government's decision to partially open stores will intensify the crisis
Ilze Šteinfelde
The Covid-19 period has significantly improved the average solvency of Latvian households
JPJuris Paiders
OIK sins and scapegoats in Preiļi are typical for the whole of Latvia
Arnis Kluinis
ABLVbank will be beaten until the very end
Imants Vīksne
OIK millionaires might get the next billion
Arnis Kluinis
The length of service will not be lost after receiving the downtime benefits
Inga Paparde