There will be no industry in Latvia 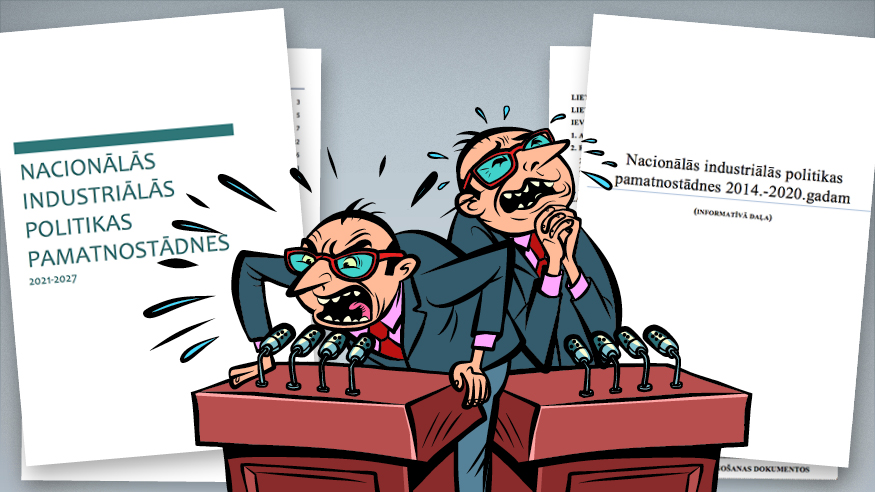 Of course, the Dombrovskis government also did not do much with its National Industrial Policy Guidelines 2014-2020 approved on May 28, 2013. In the report adjusted to the expiry date of this document and the schedule for obtaining statistical data for 2020, the MoE acknowledges that “Latvia has not achieved any of the National Industrial Policy Guidelines 2014-2020 objectives set for the year." The MoE reminds that there were four such goals.

The first and foremost (easiest to understand) was for the share of manufacturing in GDP to reach 20% in 2020. The reference point in the old industrialization plan was 2011 with a share of manufacturing of 14.1% of GDP. In fact (if official statistics are automatically accepted as facts) in 2020 this figure has fallen to 12.2%. It is indisputable that Covid-19 has eroded industry, but this factor has also eroded all GDP. The share of industry has noticed a decline, despite the fact that its share should have increased if only because the Latvian financial sector and transit have received devastating shocks during the reporting period. If, even against this background, the industry was unable to show growth not in terms of physical output but in terms of its share of GDP, then it is important to understand how significant the decline in industry is.

The second target was to increase manufacturing by 60% between 2011 and 2020, but the increase turned out to be only 22.7%. This means an increase in the total price of industrial products according to the emission of the euro, the US dollar, and other currencies throughout the old Latvian industrial planning period.

The third objective was to increase the productivity of the manufacturing industry by 40%, of which 26.6% was achieved.

The fourth objective was to increase investment in research from 0.7% of GDP to 1.5% of GDP. This was a complete disaster, as the actual contribution in 2020 turned out to be only 0.64% of GDP.

The indicators for 2020 had not yet been compiled when it was time to adopt the next National Industrial Policy Guidelines 2021-2027 K. Kariņš's government did so on February 11 this year. Covid-19 justifies the fact that the new plan was adopted only when the planned period had already begun, as the plan had to be adapted to the requirements of the European Commission and the promises to finance the fulfillment of these requirements. On the other hand, there is no justification for the content of the document on the MoE's website, which confirms the degradation of the planned aspects over the last decade. This assertion is based on four arguments.

Firstly, the new plan is marked by far more incomprehensible jumbles of words, as exemplified by the following sentence, which is separated as a separate paragraph in the action plan:

"Integration and strengthening of the principle of business discovery in the process of implementation of systemic business support policy, as well as ensuring connection with actions of other sectors and planning of necessary activities."

The Arabs say that the speed of the caravan is determined by the slowest camel. Accordingly, the document generally corresponds to the greatest nonsense recorded there.

Secondly, although with reservations, objective and transparent performance indicators have been replaced by a much larger amount of data that is easy to manipulate and has little industry relevance. Their range is revealed by the requirement to increase the number of people studying between the ages of 25 and 64 from 7.4% to 15%. Unfortunately, it may be that more learners will turn up, due to young people who have now strayed from distance learning who will need to be taught to read. This perspective has opened up with Covid-19, but in Western Europe, it has long been common practice to inflate the number of trainee adults with people of pre-retirement age who set up leisure clubs and travel from one course to the next. None of the mentioned options will in any way promote either "smart industrialization" or "green turn" that K. Kariņš sometimes mentions.

Thirdly, the new plan claims to provide a "description of the situation", but there is no mention that this situation falls within the scope of the failure of the National Industrial Policy Guidelines 2014-2020. However, this was known long before the exact 2020 figures were calculated. Unless the new plan specifies what will need to be done differently from the old plan, the taxpayers' money has been wasted in the "five regional Design Workshops", where "NIP objectives and courses of action" are discussed, and so on.

Fourthly - and I saved the main thing for the last - the new plan does not contain any guidance at all, which was of value in the old plan, despite the fact that it did not go anywhere. Here is what Neatkarīgā wrote and also showed on February 25, 2013, summarizing the presentation of the then fresh plan: “The Minister of Economics Daniels Pavļuts chose not to emphasize or repeat aloud what is literally seen in the plan presentation materials. These are changes in the territorial distribution of the country's population. If the Minister had talked about them, the plan would have received much more attention than now, when it is perceived as another variation on the thesis made during the Soviet era that the economy must be economic." 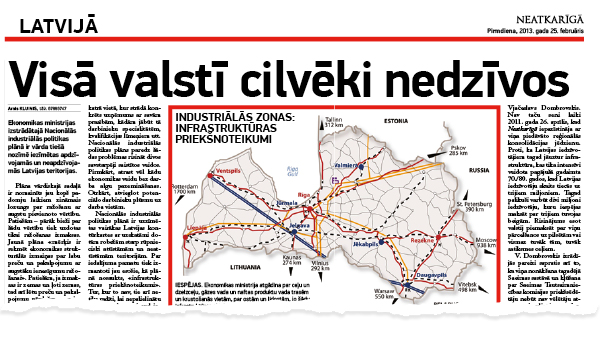 EVERYTHING IS SAID WITHOUT WORDS. The meaning of National Industrial Policy Guidelines 2014-2020 is shown visually in the February 25, 2013 issue of Neatkarīgā

The key feature of the old plan was to "promote structural change in the economy in favor of higher-yielding goods and services" instead of high-value-added production, which has been beloved since Soviet times. In other words, selling cheap goods and services could also be profitable with low production costs. It was not possible to further reduce the salaries of non-civil servants in Latvia, so it was recommended to find the cheapness by concentrating industry only where there is no need to spend on infrastructure. Shortly after D. Pavļuts, two more ministers, each within their competence, spoke with similar slogans. The Minister of Transport Anrijs Matīss warned that the state will not improve and maintain roads that have few drivers, but the Minister of Environmental Protection and Regional Development Edmunds Sprūdžs immediately wanted to reduce the number of municipalities from 119 to 30.

In fact, since 2013, rather than the concentration of population and means of production, there has been a continuous disappearance in the entire territory of the country, including Riga. In less than a decade since the previous plan, these resources have declined significantly everywhere. If they were to be concentrated in a few places now, there would still be nothing to match the name of an "industry".