Gross domestic product (GDP) data released by the Central Statistical Bureau for the second quarter are like a gift to the public officials: GDP growth of 10.3% compared to the second quarter of last year allows officials to brag about their part in economic recovery. But in reality, GDP "growth" has been at the expense of last year's crisis. Actually, GDP has grown quite modestly.
14.08.2021. Ilze Šteinfelde 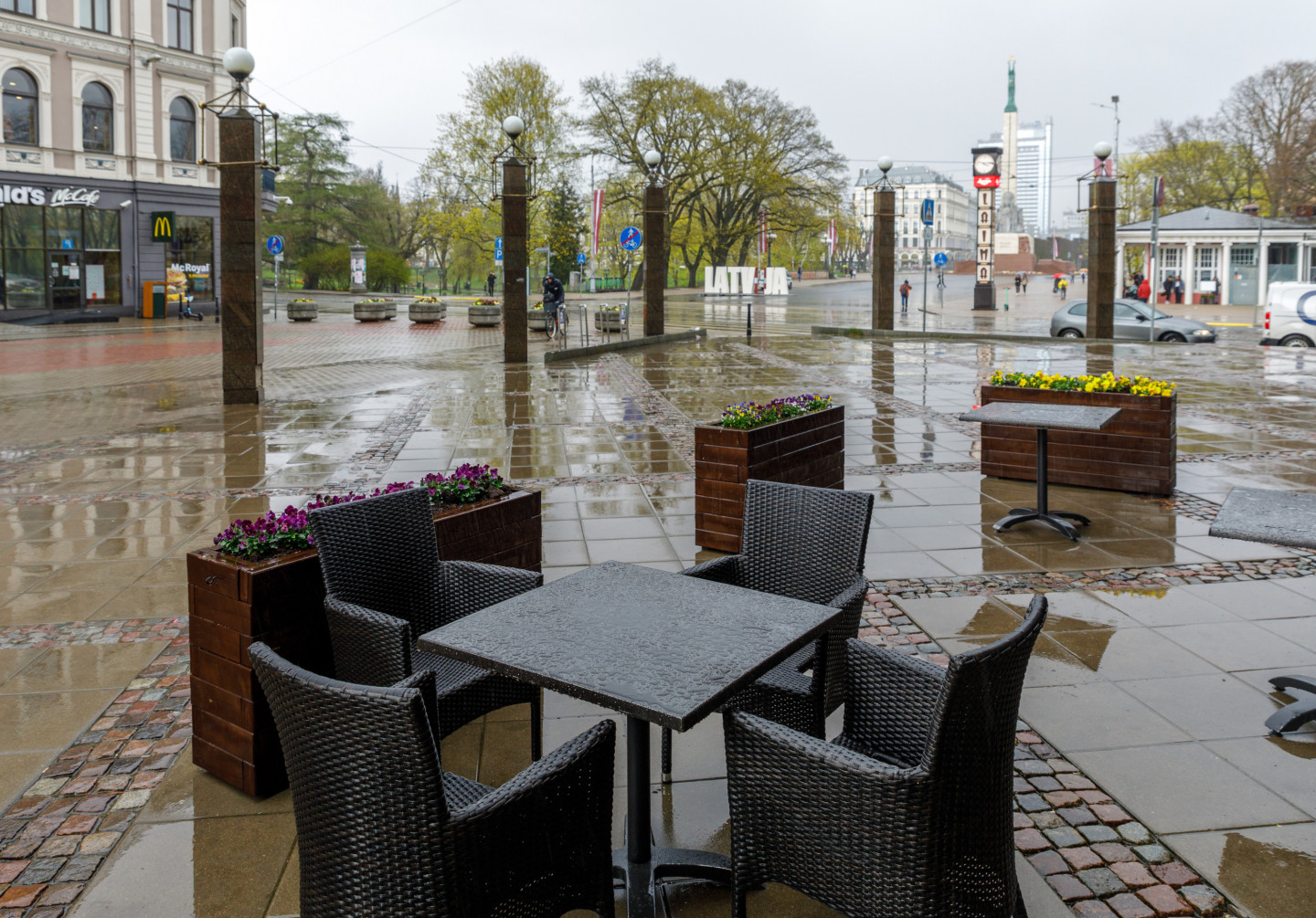 Bragging about the achieved

The Minister of Economics Jānis Vitenbergs, having learned about the data on the GDP published by the CSB, announced that these data indicate economic recovery.

"I am pleased that the Latvian economy has shown such a rapid leap and has been able to grow. Of course, it would be premature to draw conclusions and say that we have overcome the crisis caused by the Covid-19 pandemic, but the quick GDP estimate published today shows that we are on the path to economic recovery. Government support to citizens and businesses during the Covid-19 pandemic has also had a positive effect on growth in economic activity. I am convinced that vaccination of the Latvian population against the Covid-19 virus is currently the only way to stop the rapid spread of the virus in the future and further strengthen the growth of the Latvian economy so that Latvia can overcome the current Covid-19 crisis faster and embark on a path of rapid economic growth,” said Minister Jānis Vitenbergs.

Bank analysts are not as optimistic as J. Vitenbergs. According to Līva Zorgenfreija, Swedbank's chief economist in Latvia, the Latvian economy has managed to exceed the pre-crisis level a little later than its neighbors, but sooner than expected.

"The leaders are the service industries, where last year we saw a huge drop due to the first wave of Covid-19. Compared to the 2nd quarter of 2020, added value in the services sector grew by 11.3%. Almost all the affected industries have taken part here. In the second quarter, retail grew by 8.8%, while growth in accommodation and food service and even air transport compared to last year's level, when everything practically stopped, was most likely to be measured in at least impressive double-digit, if not triple-digit numbers. However, this does not mean that all these sectors have managed to recover to pre-crisis levels. Although it has already been exceeded in retail, we will not see a full recovery in the more severely affected sectors for more than a year,” warns the Swedbank economist.

According to her, even despite the fact that the second quarter was successful in the whole of Europe, it does not let us be sure of further uninterrupted growth. "On the one hand, supply chain bottlenecks prevent faster pace. For example, although orders are growing, growth in manufacturing output in Germany is already slowing down due to a shortage of raw materials. On the other hand, the pandemic is not over yet. Dark clouds have appeared in some European countries in the last month, such as Great Britain, the Netherlands, Spain, Portugal and France. Morbidity rates have risen sharply due to the infectivity of the Delta variant and larger gatherings of people. Governments in a number of countries have increased restrictive measures and are putting pressure on society in various ways to increase vaccination coverage,” explains L. Zorgenfreija. 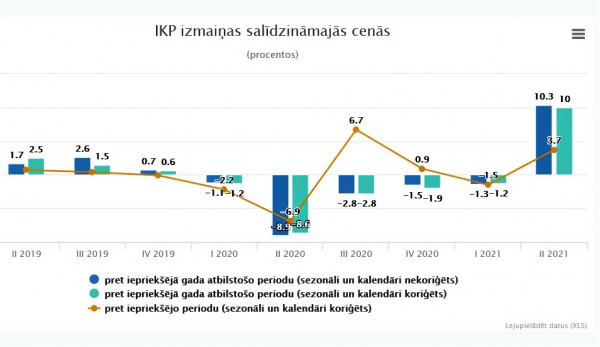 There is little optimism in Latvia

Pēteris Strautiņš from Luminor admits that GDP growth in the third quarter, compared to the second quarter, could be more moderate, most likely around 2%. "It goes without saying that the annual growth will be much more modest, because the base effect is very different. The whole second half of this year could be darkened by another wave of the pandemic,” warns P. Strautiņš, adding that the forecast for excellent growth next year is still valid.

According to him, notes of caution are sounding in the recently published consumer and industry sentiment indices. Mood indices of entrepreneurs in various industries are more on the sunny side of the scale. However, consumer sentiment has deteriorated sharply in July, including a worse outlook for the economic situation than in February. While optimism in the EU as a whole has reached a record high in July, in Latvia it is barely above the historical average, and it has decreased significantly since June.

"There are two explanations for people's concerns. The media is talking about another wave of the pandemic, possible new restrictions. It cannot be ruled out that this will be the case, although the political debate is moving towards avoiding measures that could have a significant and negative impact on the economy. This can be achieved by creating finely structured positive discrimination in favor of those who have been vaccinated. However, no one can guarantee that the Delta variant of the coronavirus will leave the economy intact. Another concern is the announcement of rising heat, gas and electricity prices. In this case, the reaction is exaggerated. The rise in prices follows a significant decline last year, housing energy prices have been broadly stable over the past decade, and the ongoing changes are within this range, while incomes have risen. On the other hand, cultivated concerns about soaring food prices lack a factual basis. Concerns about the rise in unemployment, which increased sharply in July, are greatly exaggerated because at the same time the representatives of companies in the surveys express their intentions to increase the number of employees, it seems that they know better what will actually happen,” says P. Strautiņš.

We are lagging behind our neighbors in terms of economic recovery

Mārtiņš Āboliņš, an economist at Citadele Bank, believes that the Latvian economy has reached pre-Covid-19 levels, as Latvia's GDP in the second quarter of this year was 0.1% higher than before the start of the Covid-19 pandemic in the 4th quarter of 2019.

"Latvia's economic indicators for the second quarter of this year are unexpectedly positive, but in general they say little about the strength and resilience of the Latvian economy after the end of state support measures. This is important because, despite the second wave of Covid-19 and significant economic constraints, Latvia's forecasts for major economic indicators, such as GDP, inflation or unemployment, have not changed significantly since last autumn. However, the planned budget deficit in 2021 has increased from 3.7% to about 9%, and the increase in public debt this year will be close to 2 billion euros,” warns M. Āboliņš.

According to him too, rapid GDP growth in the second quarter was already expected, as economic activity is compared to the first wave of Covid-19 in the first half of last year, which was the lowest point of the economic crisis caused by the Covid-19 pandemic.

"So far, the Latvian economy has lagged behind its neighbors during the Covid-19 pandemic, and it is hoped that the good growth in the second quarter will allow at least a partial recovery. At the same time, the Covid-19 pandemic remains a risk to the economy, although experience in other countries shows that vaccines significantly reduce serious morbidity and mortality. Unfortunately, the coverage of Covid-19 vaccination in Latvia is one of the lowest in Europe and lags significantly behind the neighbors, therefore new outbreaks of the virus and restrictions in the economy are very likely in the autumn. This would slow down the overall economic growth, but the biggest risk is definitely for the service sectors, which have not yet recovered from the previous waves of Covid-19,” M. Āboltiņš thinks.

However, Citadele's economist is optimistic, as he believes that Latvia's GDP growth could exceed 4% this year, while in 2022 the growth is likely to be around 5%. During the Covid-19 pandemic, Latvian households have accumulated significant funds, which could flow into the economy as restrictions ease. Also, investments of the EU Economic Recovery Fund will start to flow into Latvia next year, and as the restrictions decrease, the service sectors could give a one-time increase of 3-3.5% of GDP.