The doubling of fees in the country's largest waste treatment company Getliņi EKO and similar changes throughout Latvia are related to the reduction of the cost of the mandatory procurement component (OIK) for biogas producers.
23.09.2021. Arnis Kluinis 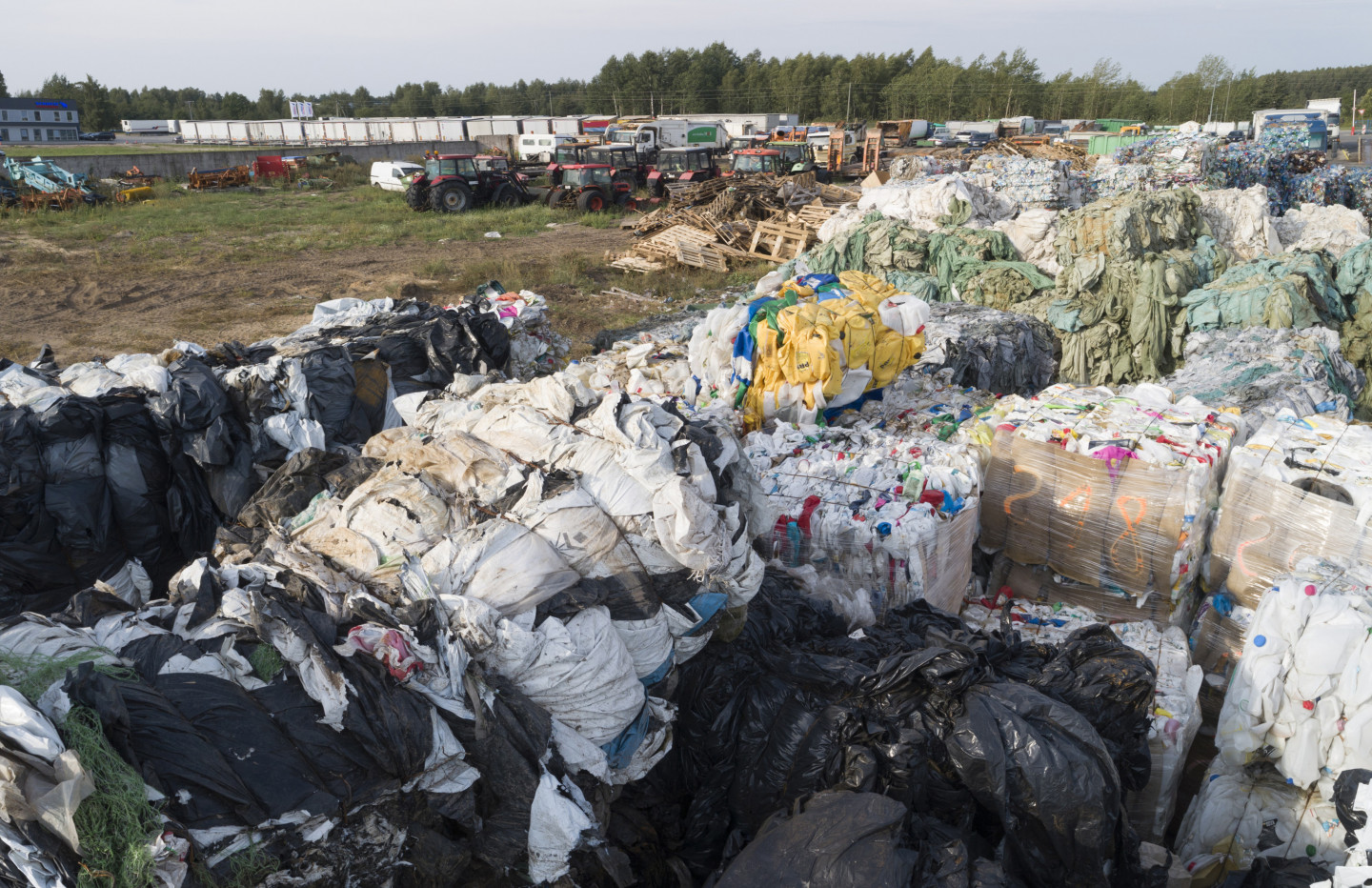 A GROWING proportion of sorted waste and the costs of sorting ©Mārtiņš ZILGALVIS, F64 Photo Agency

SIA Getliņi EKO has submitted to the Public Utilities Commission a justification why the waste disposal price should be increased from 78.04 euros per ton to 148.1 euros per ton (+89.8%) from January 1 next year. Such a price will have to be paid by the residents of the city of Riga, as well as Ādaži, Mārupe, Ķekava, Ropaži, Ogre, Sigulda, Olaine, Salaspils, Saulkrasti and Bauska municipalities (in some municipalities there are separate parishes from which waste is transported to other landfills).

Imants Stirāns, Chairman of the Board of SIA Getliņi EKO, told Neatkarīgā several reasons for the unprecedented rapid increase in fees, which revolves around the now announced green course. With the noble aim of forcing people to reduce their waste, the state has decided to increase the natural resource tax rate from 60 euros to 95 euros per ton of waste and the payment of value-added tax in proportion to how the waste is getting more expensive (the tax itself is taxed). Next, waste cannot simply be thrown in a pile. They must be sorted and recycled, the decomposing ones must be decomposed. This is energy-intensive, and prices for all types of energy tend to double. Until now, OIK has slowed down waste collection fees because Getliņi EKO received OIK for the combustion of landfill gas in cogeneration mode, obtaining electricity and heat. Getliņi EKO sells electricity through Latvenergo, but uses the heat in its greenhouses to grow its famous (and also expensive) tomatoes. 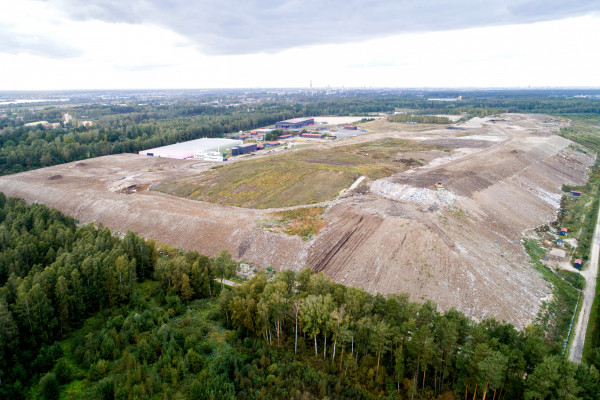 THE WONDERFUL current appearance of Getliņi in comparison with how the beginnings of the landfill looked like in Soviet times / Mārtiņš ZILGALVIS, F64 Photo Agency

Thus, this year OIK payments to Getliņi EKO have been taken away because the company is not able to meet the current norms for the ratio of heat used to all obtained heat. Simply put, the greenhouse in the summer does not need to be heated, but the gas still must be burned. The purpose of such norms is, firstly, to reduce the government's guilt for not complying with the abolition of the OIK written in its declaration, and secondly, to limit the abuses that Neatkarīgā has already described in detail, using Preiļi as an example.

The fact that wood chips are burned in Preiļi instead of biogas does not change the issue of heat use. With electricity, it is clear that the state has forced its company Latvenergo to buy electricity from state-designated electricity producers at an unfavorable price. On the other hand, the problem with heat is that the state cannot force anyone to buy heat at any price, because there are no such buyers at all or at least in the summer, where cogeneration plants are built. Meaning, power plants that also produce heat. But is "producing" what you would call an activity in which heat is dissipated in the air by ventilating electricity generation plants so that they do not overheat and melt? Yes, for almost ten years it was called that and - most importantly - it was paid for by including the cost of released heat in the price of electricity. Politicians tried to use the public's outrage about such deception to slip into the Saeima in the 2018 Saeima elections and further in the government with promises to abolish the OIK. This has not been done, however, the amount of OIK payments is reduced by limiting the release of heat in the air. Therefore, for the last two summers, the Preiļi cogeneration plant has stopped operating and receives OIK only for the time when it releases heat (at least part of the heat) into the city's heat supply network. On the other hand, in Getliņi, OIK payments are already zero, because the company is not able to meet the state norms for the useful use of heat during the year. Namely, in Getliņi it is not possible not to burn gas in summer. The waste is constantly decomposing and the gas from the decomposition is released. Theoretically, it would be possible to inject biogas into the natural gas transmission system or to compress and transport it to consumption points in tanks (cylinders), but at present there are no equipment, legal norms or even money to practice such options. In other words, launching another direction of capital investment would increase waste fees even higher than 148 euros per ton.

Along with OIK, Getliņi EKO have lost 400 thousand euros in the first half of this year, which forced the company to hurry even more with fee increases. Even with the retained OIK, they would have been raised but not quite doubled.

The rapid increase in fees has been determined by the reluctance of Latvian politicians and officials to take over the separation of biogas and landfill gas from the examples of Western European countries. Never mind that the chemical composition is almost the same for these gases and also for natural gas. From a societal point of view, it is more important to distinguish between the ways in which these gases are created and used. Landfill gas is gas that must be obtained and used in accordance with the law and not for economic reasons. 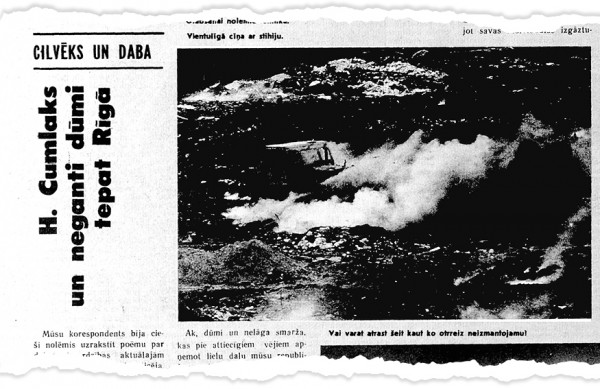 A MONTH-LONG FIRE IN GETLIŅI occurred in 1982. It started on September 25 and there was so much smoke in Riga that the communist authorities had to recognize it. The then Literatūra un Māksla (Literature and Art), later Neatkarīgā journalists Andris Jakubāns and Viktors Avotiņš, as well as the photographer Gunārs Janaitis were allowed to study and show the events in Getliņi in the October 22 issue of the newspaper. / Arhīvs

The collection and combustion of landfill gas are dictated by the fact that methane is an even more active contributor to global warming than carbon dioxide. Therefore, methane must not be allowed to escape into the air before incineration (oxidation). During the Soviet era, there was already a waste hill in Getliņi, methane was formed in it and it was oxidized by spontaneous fires, not only because paper, plastic, tires, etc. were thrown on the waste hill. The main fuel was methane escaping from the waste, which burned itself and burned anything that was flammable at all. In such a historical comparison, the current management of Getliņi is excellent, but it turns out that collecting and burning methane to obtain electricity and tomatoes is more expensive than allowing methane to escape into the air or burn on its own.

Comment
The noose of Latvian state debt is being tied around the necks of the population
Arnis Kluinis
The government of Krišjānis Kariņš saddles the average Latvian with an additional debt of 3,200 euros
Arnis Kluinis
Municipalities get money, but it's not worth a lot
Arnis Kluinis
OIK is being replaced by raising food prices
Arnis Kluinis
Trucks are replacing railways in Latvian freight transport
Arnis Kluinis
Latvia is one of the leading exporters of vodka and rum
JPJuris Paiders