Municipalities get money, but it's not worth a lot 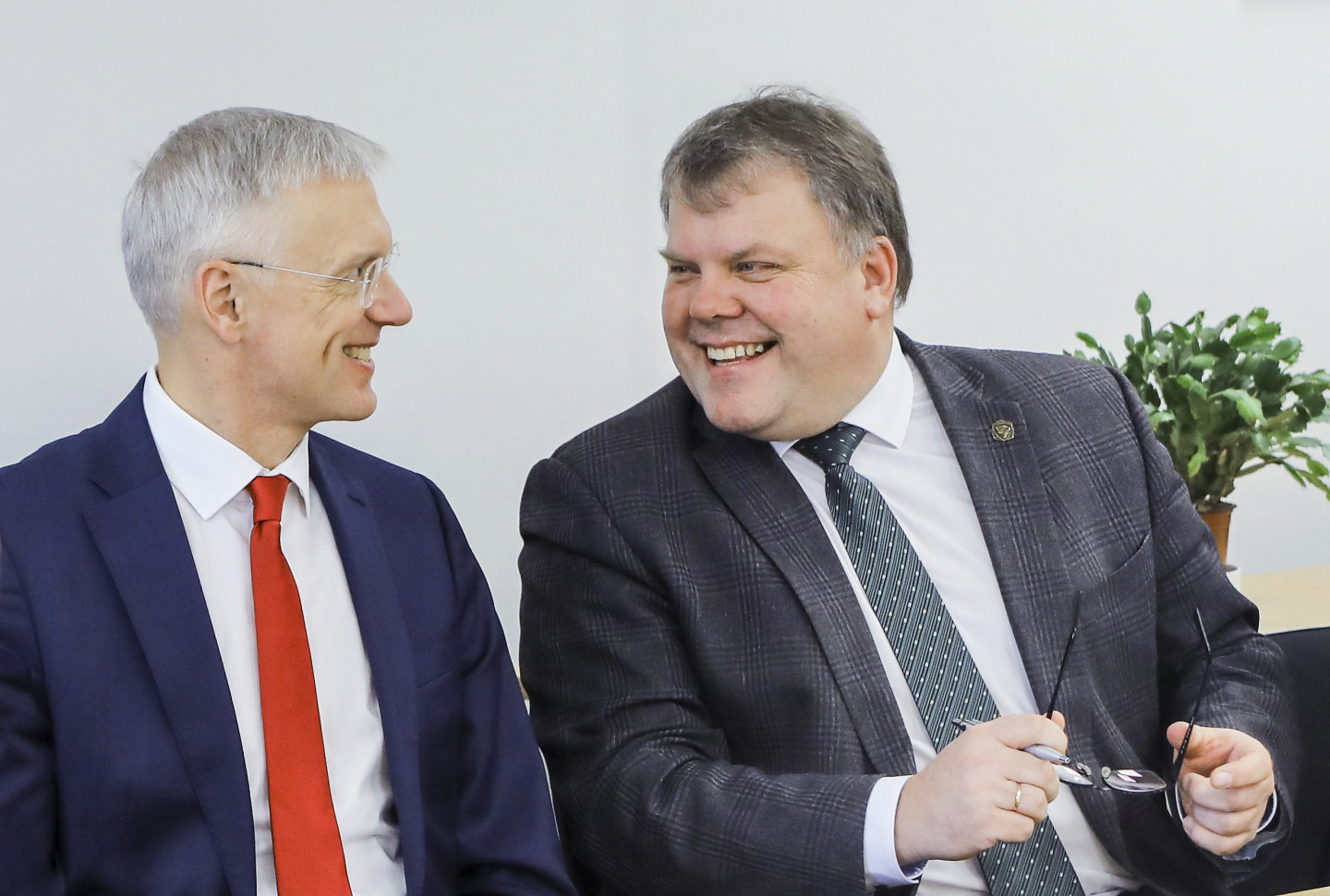 TWO TRICKSTERS. Prime Minister Krišjānis Kariņš (left) pretends to take into account the financial needs of local governments, but the Chairman of the Latvian Association of Local and Regional Governments Gints Kaminskis pretends that he believes K. Kariņš and is happy ©Dmitrijs SUĻŽICS, F64 Photo Agency

A total of 1.71 billion euros has been promised to local governments in the total amount of personal income tax, real estate tax and state grants. Compared to this year, an increase of 52.3 million euros or 3.1% is expected. If the basket of municipal expenditures would correspond to the basket of goods and services, the increase in the total price of which is called inflation, and if the LB forecast is correct, which will be revealed only next year, then the price increase will amount to 68.2 million euros from the 1.71 billion euros. In other words, municipalities will actually have 16 million euros less to pay next year's prices for everything they pay for at this year's prices. Arithmetically, this is not possible, but the amount of money is large enough that such a shortfall can be replaced or at least hidden with some sneaky money changes.

The real losses for local governments will be even higher, as the costs of their economic activity and other revenue items will increase. The Central Statistical Bureau has calculated that in 2020 local governments had a turnover of 2.77 billion euros, of which 4% is already over 100 million euros. This turns out to be more than the 90 million euros, which is how much the government of Krišjānis Kariņš gained with 5% of personal income tax revenues, the distribution ratio of which between the state and local governments was changed in favor of the state a year ago. In that case, the local governments, led by the Latvian Association of Local and Regional Governments (LALRG), at least tried to raise alert and prevent such changes. On the other hand, this year LALRG Chairman Gints Kaminskis presented the talks with K. Kariņš and Minister of Finance Jānis Reirs as good cooperation: “3.1% is not the situation when we talked about reduction. In addition, six municipalities will have additional bonuses - that is good news."

The turnaround in government-LALRG relations is yet another testament to the benefits of inflation over brutally taking away money, even if, as in Latvia last year, it cannot legally be called a robbery. These benefits are enjoyed by the state, which issues cash and non-cash money. Initially, the issuance of money coincided with its printing, but in the case of Latvia, the government does not print money. Latvia has joined the monetary union, where money is printed in Frankfurt and issued to the member states as gifts and loans in Brussels. The loans are taken out in the belief that the union will write them off, either by seemingly recovering them at the expense of the next and necessarily larger loans, or by breaking apart and failing to recover anything from the remaining, probably bankrupt countries.

The advantages of inflation for the state are that the citizens notice the loss of the monetary value or purchasing power of the money allocated by the state only after some time spent with the pleasure that more money has become available to them. Only later it turns out that the increase in the money supply does not cover such increases in expenditures as announced on October 6 by Augstsprieguma tīkls, the electricity supplier to Latvia, which influences all other prices: "In September, for the first time since opening the electricity market, the price reached three digits, 123.50 euros per megawatt-hour, which is 41.4% more than in August, and more than three times higher compared to September 2020”. "The average price of gas in 2020 was about 10 euros per megawatt-hour, but now it has reached 80 euros. The prices of CO2 emission allowances have also increased - if last year they were about 25 euros per ton, now they are 60 euros per ton. Coal prices have also increased more than three times,” continued Guntars Baļčūns, Chairman of the Board of Latvenergo.

Are these increases being taken into account in next year's draft budget? Yes, LALRG has warned the government that the current electricity prices mean the cost of lighting for streets, schools, and other municipal institutions would increase by 19 million euros. LALRG has sent a letter to K. Kariņš, who has given it to the Ministry of Economics with the task to establish a working group and "look for a solution". G. Kaminskis hopes that the ministry or working group will find more than a proposal to add 10-20 euros in benefits to the poorest families so that they can pay for electricity.

The LALRG example already has followers. The Latvian Association of Meat Processors has sent a request to the government to allocate money from the 2022 budget to cover at least part of the increase in energy prices because otherwise the sausages will become so expensive that they will no longer have local buyers. The same can be asked of the government by bakers, who have just warned that bread prices could rise by a third in the near future. The prices of potatoes have already doubled and will continue to rise because energy is required both for their storage and for transportation from afar.

Even if the Central Statistical Bureau (CSB) calculates 4% inflation on the same order, according to which the Bank of Latvia forecasts this 4%, it cannot have anything to do with the increase in real expenditures. The Bank of Latvia also had a bad feeling and soon added an explanation to its “forecasted” 4% inflation, “that the annual growth rate of consumer prices will slightly exceed 5% (not to be confused with the average annual inflation forecast of 2.8% this year, and 4.0% next year)". Then everything is right - inflation in 2022 will really exceed 5% and maybe really only “slightly” exceed 5%, if the base of comparison is set some 30 years ago. This was 1992 with 410% inflation recognized by the CSB. The price increase in 2022 by 100% will also be slightly above 5%, compared to 410%.

Next year's inflation minimum is marked by a 9% increase in government spending, but 40% is more likely, for which K. Kariņš has decided to simply raise the salary of himself and all the officials needed to maintain the existing power.

G. Kaminskis confirmed that he knows many local government expenditure items, which will increase with the increase in prices listed here. For example, higher prices for electricity, bread and potatoes mean that students can't be fed at current prices. Municipal employees will require salary increases so that they do not stop working since the salary does not cover food and heating expenses. Construction costs usually have enough capacity to outpace the average pace of price increases.

There are so many directions of the increase in spending that it does not make sense to try to cover them all and count how much extra money will be needed to repeat the same things that were done this year. The heating season that has just begun will show how much money will need to be spent on citizens and heating companies so that we can all survive together until the end of this season and the beginning of next season. Those who will have lasted through the winter - citizens, companies, municipalities or the government - will have to think about how to live on.

Comment
The pandemic accelerated the development of e-commerce by five years
Ilze Šteinfelde
Ports will be given the name and funds of state-owned companies
Arnis Kluinis
There is less sea cargo, but more variety
Arnis Kluinis
The noose of Latvian state debt is being tied around the necks of the population
Arnis Kluinis
The government of Krišjānis Kariņš saddles the average Latvian with an additional debt of 3,200 euros
Arnis Kluinis
OIK is being replaced by raising food prices
Arnis Kluinis