The government of Krišjānis Kariņš saddles the average Latvian with an additional debt of 3,200 euros

Under Krišjānis Kariņš, the national debt should increase from 10.6 billion euros to 17 billion euros, which corresponds to an increase in debt of approximately 3,200 euros for each of the 1.88 million people remaining in Latvia, or 7,200 euros for the statistically average family of 2.26 people.
13.10.2021. Arnis Kluinis 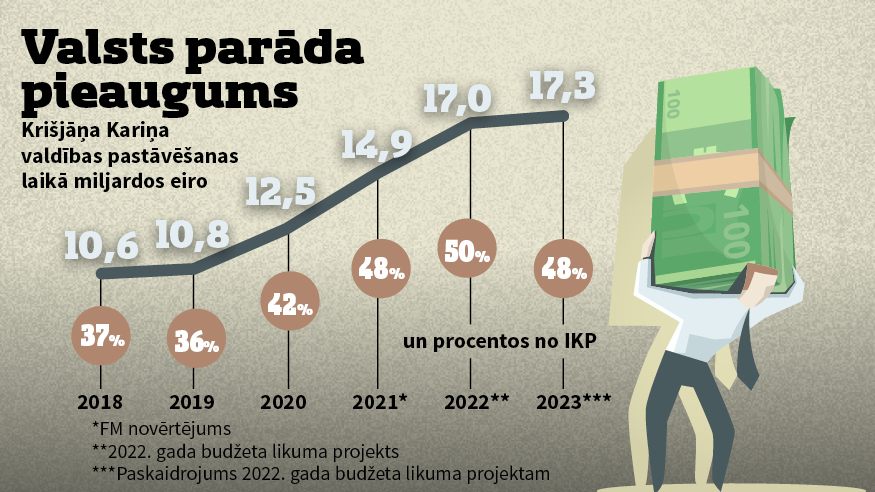 Yesterday, on October 12, the government of K. Kariņš completed work on the budget of the last year for which it has full responsibility. It's the draft budget law for 2022. In the autumn of next year, the re-election of the Saeima will take place, which by law also provides for the change of government. The current government's responsibilities include leaving drafts for the 2023 budget law, which the next Saeima and the government may or may not use, depending on the election results. There are no legal obstacles for K. Kariņš not to take over the leadership of the government from himself, if politicians will be able to interpret the will of their voters in this way. In the recent past, three Latvian governments have been led by Valdis Dombrovskis, who appealed to the electorate by increasing the national debt from 6.9 billion euros at the beginning of 2009 to 9.1 billion at the end of 2013, which roughly coincides with Dombrovskis' governments.

As you can see, K. Kariņš has been much more generous than V. Dombrovskis. Should people vote for K. Kariņš so that borrowing and spending money will continue for many years to come? Is it possible? Documents accompanying next year's budget signal that this will not be possible. Namely, 2023 marks a debt increase from 17 to 17.3 billion euros. Such an increase will be close to nothing, compared to the way the country spends borrowed money this year and will continue to do so next year.

This year's practice shows that the state budget law is not important, because the government borrows and distributes borrowed money without the restrictions specified in the budget law. As written in one of the explanations included in the 2022 budget law package, “according to the Ministry of Finance, the general government budget deficit in 2021 could reach 2.9 billion euros or 9.3% of GDP, which is twice as high as planned in the budget law. The high deficit is due to a large number of Covid-19 support measures, the impact of which is estimated at 2.2 billion euros or 6.9% of GDP this year." Another section of the explanations recalls that “according to Law on the Management of the Spread of COVID-19 Infection, the Minister of Finance is authorized to borrow on behalf of the State, to the extent necessary, to set instruments and conditions to provide funding for measures to reduce and prevent the impact of the spread of Covid-19 and related expenditure, as well as is entitled to increase the maximum amount of public debt specified in the annual State Budget Law at the end of the financial year and the appropriation specified for the fulfillment of public debt management expenses and liabilities.” In other words, it won't matter too much how much the budget of 2022 will be debated and voted on by the Saeima Members in the coming weeks, because in reality, it is not even the government with K. Kariņš, but the Ministry of Finance with Jānis Reirs who will distribute the money.

Next year should be no different from this year, as “the general government deficit for 2022 is projected at 1.6 billion euros or 4.8% of GDP. Support measures related to Covid-19 will continue next year, with continued implementation of high-preparedness projects at the national and municipal levels, as well as funding for the purchase of vaccines. The impact of the support measures on the general government budget deficit next year is estimated at 263 million." Namely, the budget deficit is planned similarly to this year and there are no signs of the government's determination not to surpass this deficit. As soon as there are reasons to spend more, the government will spend more.

A large part of Latvia's public expenditure is covered not only by debts but also by European Union donations to its relatively poor member state. Of the huge pile of state budget documents for 2022, the following hopeful remark is particularly noteworthy:

"Foreign financial assistance revenues are expected to continue to grow in 2022 and will reach unprecedented levels in the medium term, as both the closure of projects in the 2014-2020 programming period and the active phase implementation of projects for the 2021-2027 programming period will take place in parallel, as well as the implementation of the Recovery and Resilience Facility and Rail Baltica projects."

The Ministry of Finance and the Treasury state that there will be no difficulties in financing the state budget deficit: “The necessary funding to cover the total financing needs, including the mitigation of the impact of the Covid-19 outbreak, was ensured by issuing sovereign debt on the financial markets and borrowing resources from international institutions.”

External debt continues to account for the largest share in the government debt structure, reaching 81% of total government debt. Latvia is ready to fulfill its international obligations as long as it manages to delete old bonds and other claims with new bond issues for larger amounts. So far, there are no problems to keep borrowing to repay both the principal and interest of the loan. Next year, it will be 166 million euros in interest.