Even though in comparable units - as a percentage of GDP - Latvia's public debt looks five times lower than Japan's, it is five times harder to live with. Unlike arithmetic, economics allows the expression 50>266.
14.10.2021. Arnis Kluinis 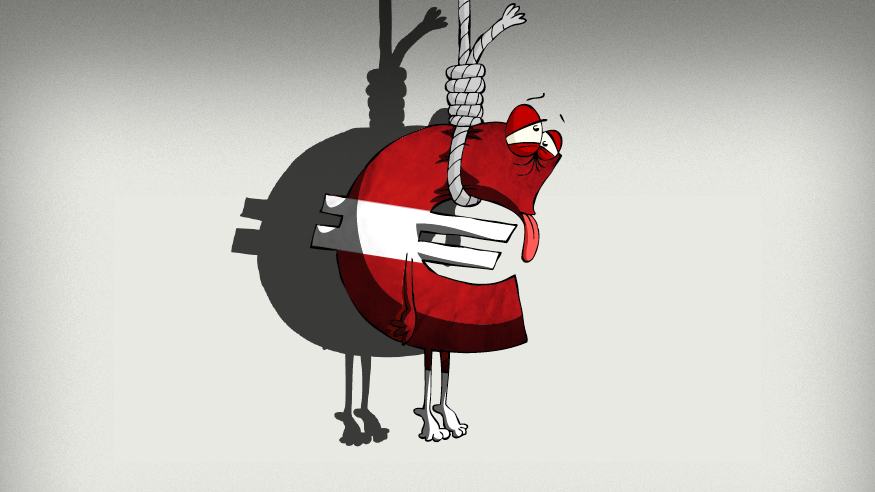 The documents of the draft state budget of Latvia for 2022 confirm that during the government of Krišjānis Kariņš, the national debt of Latvia will increase from 10.6 billion euros to at least 17 billion euros. To compare countries by their debt burden, the debt as a percentage of their gross domestic product (GDP) is used. In this form, Latvia's public debt will increase from 37% to 50% during the existence of K. Kariņš's government, if the draft budget for next year is adopted and if the implementation of the budget law more or less corresponds much to what is written in the law. With this 50%, Latvia will still look like a relatively frugal and modest country, as many countries have borrowed more. The world record for debt as a percentage of GDP belongs to Japan.

Japan's debt is set to reach 13.11 trillion US dollars this year, which is 11.27 trillion euros at current exchange rates. These figures are given to illustrate the scale of the Japanese economy. The main thing is not to confuse trillions with billions, which is how much Latvia has in its annual budget. Japan's debt-to-GDP ratio is estimated at 266%. Many other countries fill the gap between 50% and 266%, so not everyone understands (or understands but pretends not to because K. Kariņš would not like it) why one should worry about Latvia's public debt and its growth. However, economics is not arithmetic that does not allow the expression 50>266. In economics, this may be and unfortunately is the case when comparing Latvia with Japan and other similar countries.

The essence of the case is to benefit from the fact that countries service their debt. This means paying interest on loans to creditors, who are thus indeed well serviced.

All that remains is to ask a very simple question about who are the beneficiaries of public debt. Does the percentage paid remain or does it not remain in the country paying the interest?

If the state pays the interest to local banks, pension funds, etc., which deliver this money to their depositors, shareholders, participants, bond coupon holders, etc., then everything is in order from the point of view of money circulation. It does not guarantee that such a movement of money automatically ensures general prosperity and that the Japanese record is something that should be pursued. There are also regular reports of economic crises, changes of government, scandals and high suicide rates from Japan. The Japanese can afford it all, just like the large debts of their country.

Latvia's 2022 budget package does not reveal anything sensational that would have been unknown so far, but still in a very visible way - also with diagrams - confirms the outflow of money from the state because the state services its debt, i.e. its creditors. This package is available to all Internet users in the government meetings section of the Cabinet of Ministers' website, in the folder of the October 12 sitting, in which there are thousands of pages of the budget law with its explanations and annexes. Here you can find the explanatory notes to the budget laws and see how the 226 million euros will be distributed and how much the state plans to spend this year to service its debt: 186 million euros for Latvian bond buyers abroad, 12 million for local bond holders and 27 million through two more channels with local recipients both for keeping money in the Treasury and for keeping Treasury money in private banks with negative deposit rate. By 2024, as far as the explanations for next year's budget go, the reduction in interest payments to 205 million euros should only be at the expense of local recipients, who will have only 14 million euros left.

You need to know only the basic information about Japan's public debt to have no doubt that the Japanese do not service international financial speculators. As stated in the Wikipedia article on Japan's debt, “Around 70% of Japanese government bonds are purchased by the Bank of Japan, and much of the remainder is purchased by Japanese banks and trust funds, which largely insulates the prices and yields of such bonds from the effects of the global bond market and reduces their sensitivity to credit rating changes. Betting against Japanese government bonds has become known as the "widowmaker trade" due to their price resilience even if fundamental analysis indicates the contrary should be true."

Here you can see another advantage for Japan and a threat to Latvia, which, together with the printing of money, has also lost the opportunity to influence interest rates on its loans. Yes, at the moment the rates are almost zero and below zero, but this is not a guarantee that they cannot rise to at least 10%, even 100%. Let the current interest-free bills remain the same for several decades until the end of their term, but Latvia cannot return a single euro of principal or interest without borrowing two euros. Thus, it cannot be ruled out that at some point Latvia will have to pay an additional 100% for the money needed to repurchase a 0% promissory note.

The current trend of the doubling of the public debt over a few years poses at least three threats. The first is that the amount of debt will have a major impact on interest payments at a time when interest rates will rise. In addition, this effect will be on a progressive scale. The higher the debt, the higher the interest that creditors will charge on future loans, taking into account the risks of non-repayment. The second is that a few years, during which the state apparatus can afford to spend (write off, waste, misappropriate) any amount of money, is enough so that it would no longer know how to exist otherwise. Thirdly, the increase in debt tends to lead to the inevitability of canceling it by violent methods.

Comment
Ports have faith and say years of cargo losses are over
Arnis Kluinis
Why Latvia is swapping cheap woodchip for expensive gas
Arnis Kluinis
The pandemic accelerated the development of e-commerce by five years
Ilze Šteinfelde
Ports will be given the name and funds of state-owned companies
Arnis Kluinis
There is less sea cargo, but more variety
Arnis Kluinis
The government of Krišjānis Kariņš saddles the average Latvian with an additional debt of 3,200 euros
Arnis Kluinis