There is less sea cargo, but more variety

2021 is the third in a row when the amount of cargo handled in Latvian seaports is decreasing compared to the previous year.
30.10.2021. Arnis Kluinis 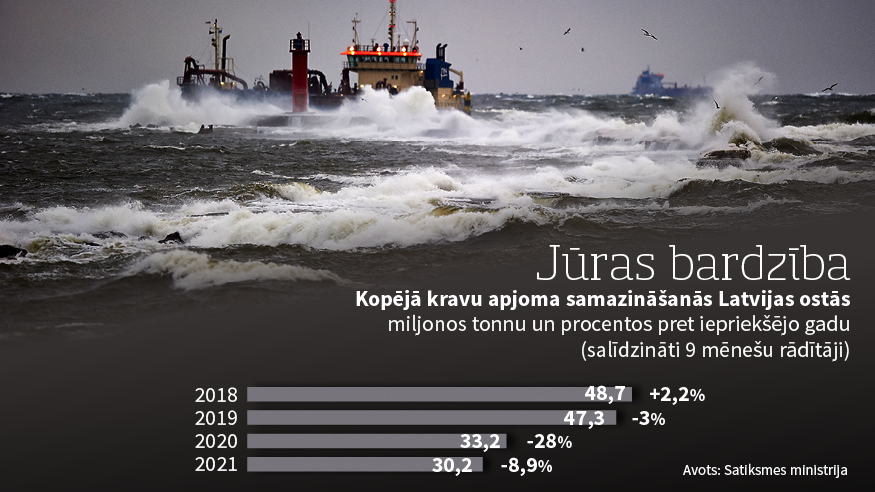 The harshness of the sea. Decrease in the total volume of cargo in Latvian ports in millions of tons and as a percentage compared to the previous year (comparing 9-month indicators) ©Gatis Rozenfelds/F64

The year is not over yet, so the figures for the first nine months of the year are used for comparison. The information compiled by the Ministry of Transport shows that 30.2 million tons of cargo handled in Latvian ports is 8.9% less than in the first nine months of 2020. This rate of decline is clearly slower than in 2020 when it was -28% compared to the first nine months of 2019, but it does not mean that the current decline in cargo volumes is less painful than last year. Namely, this reduction is approaching the limit beyond which the ports will have to significantly reorganize their activities to reduce costs. It should be emphasized at the outset that changes in cargo turnover in individual ports do not coincide with the overall rate of change.

The Port of Riga has maintained the largest cargo volume in the amount of 15.3 million tons, but has lost 13.2% of last year's cargo volume. 8.3 million tons of cargo were handled in Ventspils port, but in percentage terms, they have decreased by 13.8%. The port of Liepāja is now really competing with Ventspils, as the 5.1 million tons handled in Liepāja corresponds to +8%.

A total of 1.6 million tons in Latvia's small ports is an increase of 23.7%. Smaller cargo volumes in each of the ports contribute to a rapid change in cargo volumes in percentage terms. A notable example is the port of Salacgrīva with 310,100 tons of cargo, which corresponds to +50.7%.

On the one hand, the 30.2 million tons of cargo handled in the first nine months of this year is not unprecedented and does not mean that ports must be closed. The oldest information in the LETA agency's archive describes 1994. The old data do not refer to nine months, but 12 months with 34.7 million tons handled. Of course, this year the ports will continue to operate and will exceed the historical indicators but they will not reach the level of last year. The distribution of cargo between the major ports back then is also worth recalling. At that time, 26.8 million tons were delivered to Ventspils, because both the crude oil and oil product pipeline from Russia to Ventspils was in full swing. The restriction of both pipelines until their suspension took place in several steps, so the port, as well as the city, managed to adapt to these changes by investing the port's revenues in the development of the port's industrial area. At that time, 5.99 million tons of cargo were handled in Riga, but in Liepāja - 1.1 million tons of cargo.

On the other hand, both the state together with municipalities and private berth owners have invested a lot of money in port infrastructure. Many investments have now lost their returns. This is painful for operators and endangers keeping shipping lanes, berths and other objects in order until better times. There are no significant signs of them returning.

However, it would be premature to say that good times will never arrive and ports must be closed so as not to increase the losses. That's similar to what was said in the 1990s that with the collapse of the Soviet Union, the ports that had adapted to the needs of the USSR's foreign trade would die off.

Latvian ports did have a hard time for five years, but already in the mid-1990s, the most discerning businessmen and politicians realized how much potential these ports have for an indefinite period of time. Transit cargo service was declared a sign of recognition of the Republic of Latvia.

At present, ports use a variety of techniques to stay afloat. The Port of Riga hurried to inform that at least on the scale of September, there has already been a turnaround in the growth of cargo volume by 8% compared to September 2020. The largest remaining cargo group - forestry products (pictured) - has grown by 10% in nine months and reached 4.6 million tons. The volume of container cargo and grain cargo has increased. 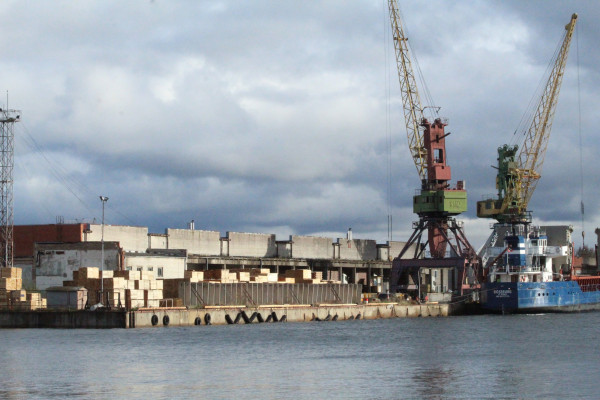 In Liepāja and Ventspils, the ports are notable by ferry lines, the existence of which shows that the cities have a developed industry. It requires both rhythmic deliveries of raw materials and blanks and the ability to send products to consumers.

The Liepāja Special Economic Zone, which is based on the port, can be proud of the decision announced by the Swedish shipping company Stena Line on April 26 this year to supplement the ferry line between Travemünde (Germany) and Liepāja with a third ferry. Thus, the number of trips was increased from five to seven per week in accordance with the growing flow of cargo between the Baltic States, Germany and Russia.

In Ventspils, Stena Line undertook to maintain ferry traffic for another 20 years in an agreement signed with Noord Natie Ventspils Terminals earlier this year. The agreement includes joint investments in the terminal area to meet current and future tonnage needs on trips between Ventspils and Nynäshamn, which is the shortest route between the Baltic States and Sweden. Stena Line started operating between Ventspils and Nynäshamn in 2012. Since then, the intensity of ferry traffic has doubled, increasing from one ferry and 10 trips a week to two ferries and 24 trips a week. At the end of September, the Stena Line ship Stena Scandica was shown off in Ventspils after reconstruction in Turkey - extension and adaptation for berthing in Latvian ports. Next year, the ship is planned to be operated on the Liepāja-Travemünde route, as two completely new and even larger ferries will be launched between Ventspils and Nynäshamn, which are currently being built in China for 200 million euros.

Since the restoration of Latvia's independence, it seemed self-evident that ferry traffic with other countries' capitals and cities will come primarily to Riga, but there have always been circumstances that make no ferry line available to Riga now, despite more than 30 years of efforts. On August 21 of this year, Neatkarīgā provided an overview of events as a result of which "Riga in this configuration of cargo and passenger transportation turns out to be unneeded."