The average wage before taxes in Latvia rose by 11.8 percent last year, according to data from the Central Statistical Bureau (CSB). However, this does not mean that wages rose in all sectors and for all workers. The reduction of business due to the Covid-19 pandemic has mostly resulted in lower-paid workers losing their jobs, while those working in the general government, health and social care sectors have seen higher wage increases than the national average.
07.03.2022. Ilze Šteinfelde 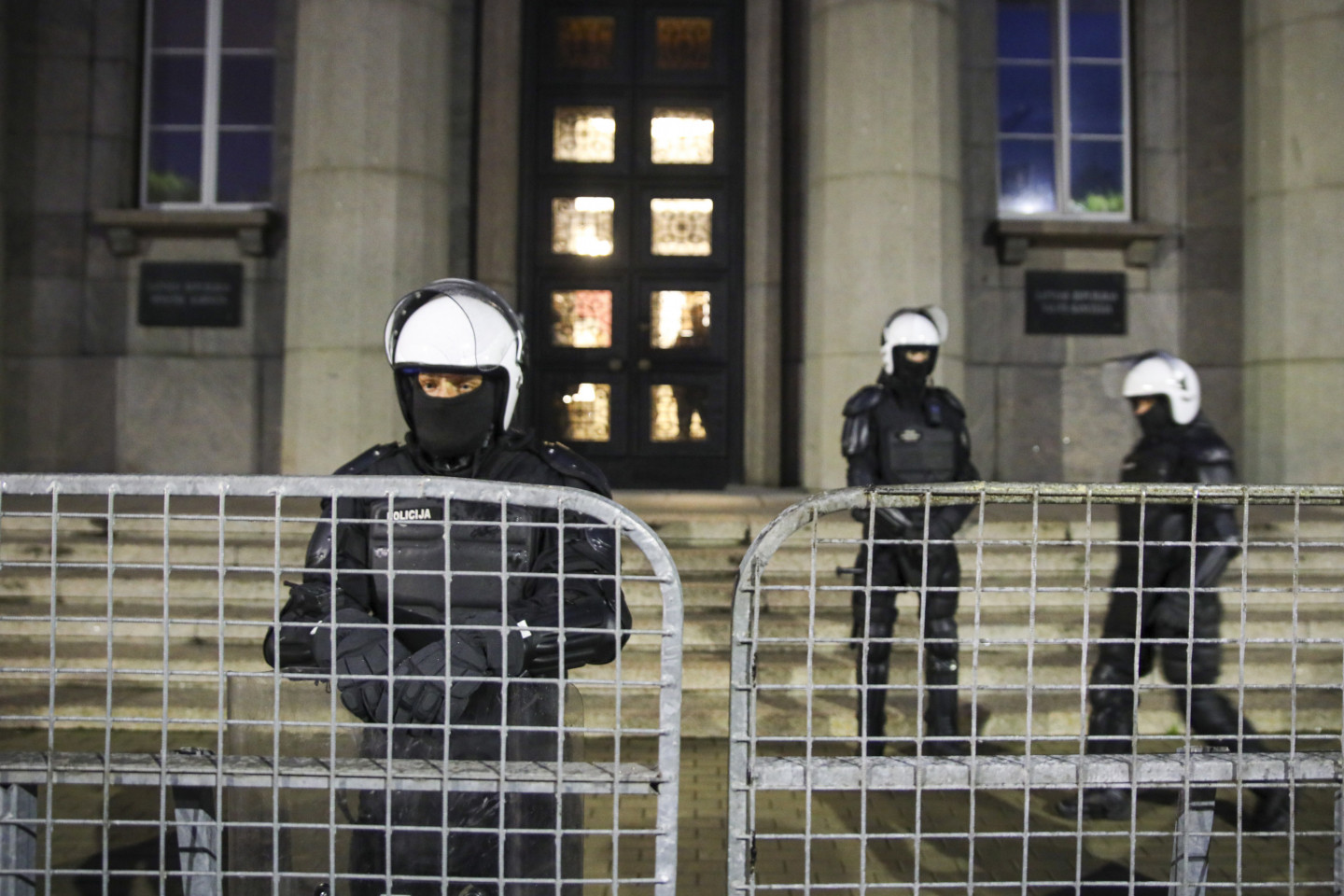 "Looking at prices on the shelves and higher utility bills, the issue of people's purchasing power is becoming more and more pressing. Inflation is eating an increasingly bigger slice of the wage growth pie, but by no means all of it. The situation varies from sector to sector and, of course, it is even more diverse at the level of the individual. At the end of the year, average net wages were already rising slower than inflation in some sectors," says Swedbank economist Agnese Buceniece.

She predicts that wage growth will slow down this year - the impact of the pandemic on the structure of the labor market will ease, there will be no support for minimum wage increases, and doctors will hopefully have to work less overtime. These factors were already known in advance, unlike the Russia-Ukraine war and the related sanctions, which will undoubtedly have a negative impact on the Latvian economy.

"The new conditions mean higher inflation and slower growth, which is also likely to slow down the labor market recovery and cause wage growth to relax a little more than expected. A larger share of the population may face a fall in purchasing power," the economist predicts. 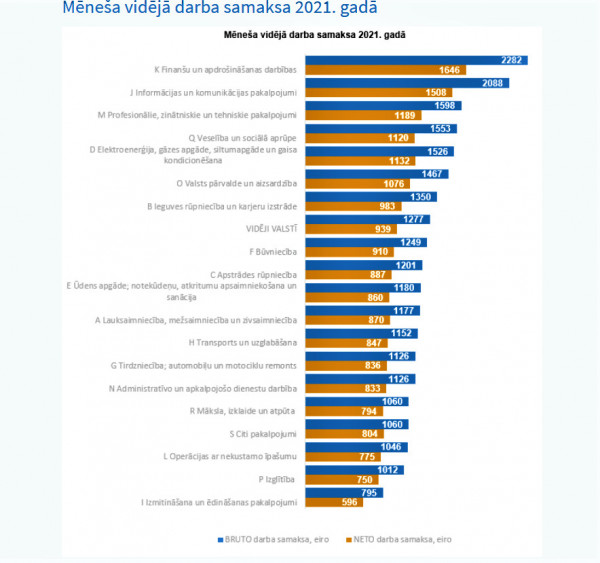 In 2021, the average monthly gross wage in the private sector was €1,273, up 11.9% over the year. The average wage in the public sector was €20 higher than in the private sector (€1,293) and grew at a slightly lower annual rate (11.8%). In the general government sector, which includes state and local government institutions and state and local government-controlled and -financed corporations, average wages rose to €1,268, or by 13.1%, according to the CSB.

Over the year, average wages grew fastest in the health and social care sector, by 28.2%, where both the wage fund and the number of full-time employees increased. Similar trends were also observed in mining and quarrying, manufacturing and information and communication services. Overall, average monthly wages were above the national average in seven sectors: financial and insurance activities, information and communication services, professional, scientific and technical services, health and social work, energy, public administration and mining and quarrying.

The lowest average pre-tax wage was in accommodation and food services (€795).

Dainis Gašpuitis, economist at SEB Bank, points out that wage dynamics are reflected in the economy with a certain time lag, and even then the reaction is relatively cautious. At the moment, it is impossible to predict how well each sector will be able to overcome the obstacles.

"The beginning of the year is a time when employment contracts are usually renegotiated, as are wages, and what is happening in Ukraine may bring its own adjustments. Therefore, it can be assumed that the average pace may fall slightly. However, wages are a very sensitive issue and it is more likely that the difficulties in the economy will be reflected in the unemployment data than in wage growth adjustments," says Gašpuitis.

As the Covid-19 restrictions ease, the demand for workers in service sectors will increase, he said. The transit sector could be the most negatively affected, possibly some manufacturing sectors, while tourism has already adapted to the situation and, like other sectors, will not be able to afford not to raise, let alone reduce, wages. The same applies to construction.

What is happening in other sectors could go some way towards reducing the risks of overheating and the pressure on the labor market. Therefore, the view that wage growth will average 8% over the next two years remains, which could be enough in these circumstances to keep average purchasing power from deteriorating, Gašpuitis predicts. 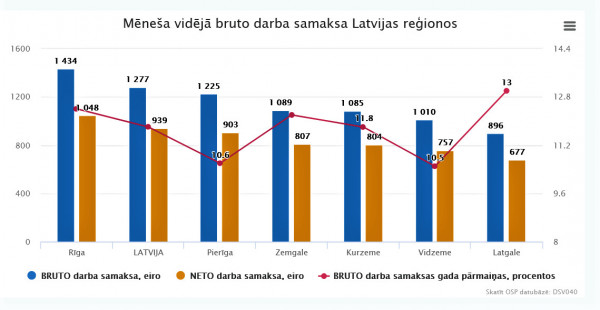 Latgale pays the lowest wages, lower earners were the first to be laid off in the crisis

"It might seem that raising the minimum wage would help low-income earners, but there is still the issue of the share of the shadow economy, including the fact that the ability of companies to pay employees varies dramatically in different regions of Latvia," says Opmane.

The economist points out that Riga and Pierīga have much lower unemployment rates and more competition for employees, which is also reflected in wage statistics, with higher average salaries in the area. However, raising the minimum wage could prove painful for honest entrepreneurs in Latvia's more remote regions, who pay employees according to their productivity rather than using it as a "compulsory payment", with the rest of their wages paid in envelopes.

Opmane believes that improving the living standards of lower-paid workers in the long term cannot be tackled in a purely mechanical way by forcing companies to pay more. Instead, targeted government policies can promote conditions in which companies themselves are able and willing to raise wages for their employees - by boosting productivity, investing in education and training for employees and the unemployed, and promoting job opportunities also in Latvia's more remote regions.

MP Jānis Urbanovičs: I'm not trying to scare anyone, I'm very scared of it myself
Jānis Lasmanis
The last pre-war growth in the Latvian economy
Arnis Kluinis
Latvia attracts ships as a peaceful port
Arnis Kluinis
The biggest price increase in a year since we introduced the lats. Fuel and vegetable oil prices up by a third, potatoes by more than half
Ilze Šteinfelde
Kalvītis was too hasty moving to rubles
Imants Vīksne
Oil prices are not yet at record levels, but fuel prices in Latvia already are
Ilze Šteinfelde