The biggest price increase in a year since we introduced the lats. Fuel and vegetable oil prices up by a third, potatoes by more than half

Latvia is experiencing its sharpest price rise in a decade. Even steeper price rises in Latvia were recorded only during the 2007-2008 crisis.
11.04.2022. Ilze Šteinfelde 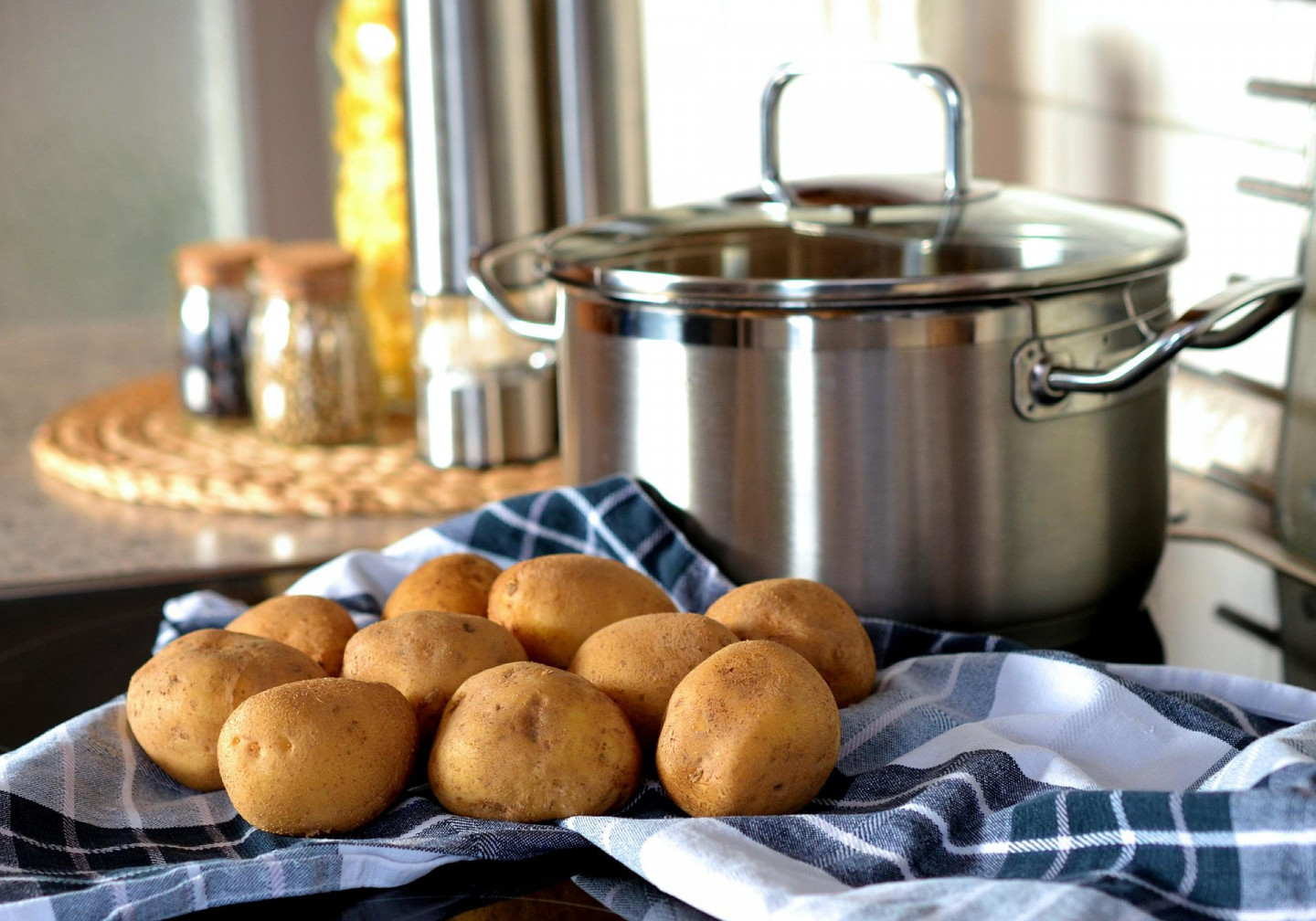 Life in Latvia has become 12% more expensive in a year

The average consumer price level increased by 11.5% in March 2022 compared to March 2021, according to the latest data from the Central Statistical Bureau. 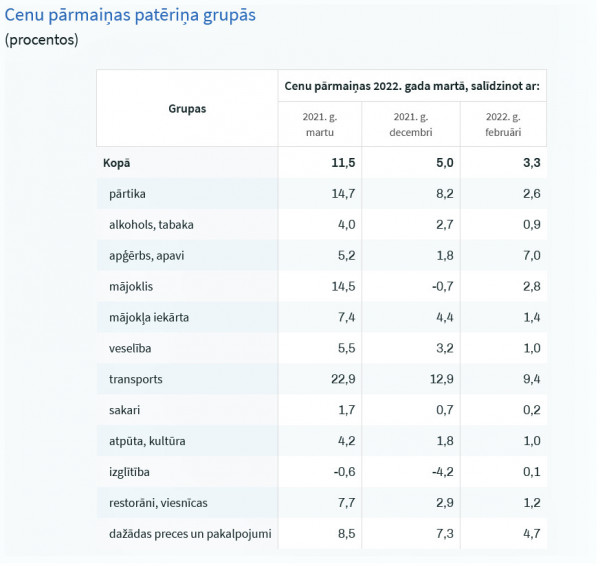 The average consumer price level increased by 3% over the month. The fastest price increases were recorded for salt and spices (+10.5%), vegetable oil (+8.0%), coffee (+6.6%), beef (+5.4%) and ice cream (+5.3%). The average price level for clothing and footwear increased by 7.0% in March. For housing-related goods and services, the average price level increased by 2.8%. Electricity, solid fuels, heating, as well as materials for home maintenance and repairs became more expensive. Transport-related goods and services became 9.4% more expensive, mainly due to a 17.1% increase in fuel prices. Diesel prices increased by 20.3%, petrol by 15.0% and autogas by 2.5%. Air passenger transport, spare parts and accessories for private vehicles were more expensive.

The three drivers of inflation

The Ministry of Finance sees several reasons for the sharp rise in prices. "Firstly, the energy crisis in Europe, which started in autumn last year, is driving the sharp rise in prices. The rise in energy prices, in particular for gas and electricity, was driven by a number of factors, both on the supply side (low water levels at hydroelectric power plants, weak electricity generation from alternative sources) and on the demand side (adverse weather conditions last year, a growing economy and rising consumption). Second, the surge in food prices around the world is having an impact on inflation. Food prices have been rising since the beginning of 2021, negatively affected by post-pandemic demand growth, poor harvests of some crops, fertilizer price increases due to high energy prices, and logistical disruptions. Thirdly, the Russian aggression in Ukraine at the end of February this year reinforced the negative impact of the above two factors and increased tensions in both energy and food markets."

Economists agree: prices will continue to rise. "Inflation in Latvia is expected to peak towards the middle of the year. In the second half of the year, year-on-year inflation will be dampened by the base effects of the previous year. Swedbank forecasts that average inflation in Latvia will be around 10% in 2022, before easing to 3.5% in 2023," says Swedbank economist Laura Orleāne.

According to Pēteris Strautiņš's forecasts, average inflation could be close to 10% this year. "There is more money than there has ever been in Latvia, but prices are also rising and will continue to do so. We have to agree with the Bank of Latvia that average inflation could be close to 10% this year, but the range of plausible scenarios is very wide. The inflation genie is out of the bottle and it will not be easy to put it back in. Inflation expectations could be broken by an economic crisis with recession and high unemployment. A more pleasant scenario would be a sustained and strong fall in the price of raw materials, and that is certainly possible. The future price curves for many raw materials, including oil, wheat, maize, soybeans, cotton, sugar, are strongly downward sloping, with prices expected to fall by about a fifth in three years. What will happen, for example, if the war in Ukraine ends, shale oil enters the market lured by the high prices, Iran and Venezuela regain free market access? The result would probably be a price crash similar to the one that occurred at the end of 2014. But for now, these are sweet dreams, and inflation is set to rise further in the months ahead," says Strautiņš.

Citadele Bank also forecasts a significant price increase in the future - as much as 15% in mid-summer.

"At the moment, there is no reason to expect a fall in global food or energy prices, and in Latvia we have so far only slightly felt the impact of the rise in natural gas prices. Current natural gas prices are about five times higher than before, and a rise in heating prices is definitely expected in the autumn, although the government will have to think about support measures. The war in Ukraine is a significant factor in Latvia's inflation above 10%, but price pressures were also felt before that. In February, producer price inflation in Latvia exceeded 25%. At the same time, this is not a traditional economic downturn and the situation is certainly not similar to 2008 or 2020," emphasized Mārtiņš Āboliņš, economist at Citadele.

SEB Bank is slightly more optimistic than other banks, forecasting average inflation in Latvia below 10% for this year.

Dainis Gašpuitis, an economist at SEB Bank, points out that although wages will continue to grow at a fairly fast pace this year (6.5%), price growth will outpace it this year, causing average purchasing power to fall. This will slow down consumption growth, but will not stop it. "As a result, savings growth will slow down sharply and the number of people who will no longer be able to set aside anything or will face difficulties in meeting their everyday expenses will increase," warns Gašpuitis.

According to him, the state should prepare measures to support the population in time, assessing different development scenarios. Targeted support measures will allow efficient use of public funds, but in certain scenarios, general support measures may also be needed to limit disproportionate cost increases. "Citizens have virtually no power to influence price increases, except by creating an unnecessary commotion. The only tool is to review and adjust consumption, which many will have to do in the near future," said Gašpuitis. He forecasts average inflation of 9.2% in 2022.

MP Jānis Urbanovičs: I'm not trying to scare anyone, I'm very scared of it myself
Jānis Lasmanis
The last pre-war growth in the Latvian economy
Arnis Kluinis
Latvia attracts ships as a peaceful port
Arnis Kluinis
Kalvītis was too hasty moving to rubles
Imants Vīksne
Oil prices are not yet at record levels, but fuel prices in Latvia already are
Ilze Šteinfelde
Russia's war tax doubles in a week
Arnis Kluinis