The war in Ukraine is reverberating in Latvia with a rush at the ports, with an almost unbelievable increase in the amount of cargo handled in March, when the consequences of the Russian attack on Ukraine on February 24 began to be felt.
15.04.2022. Arnis Kluinis 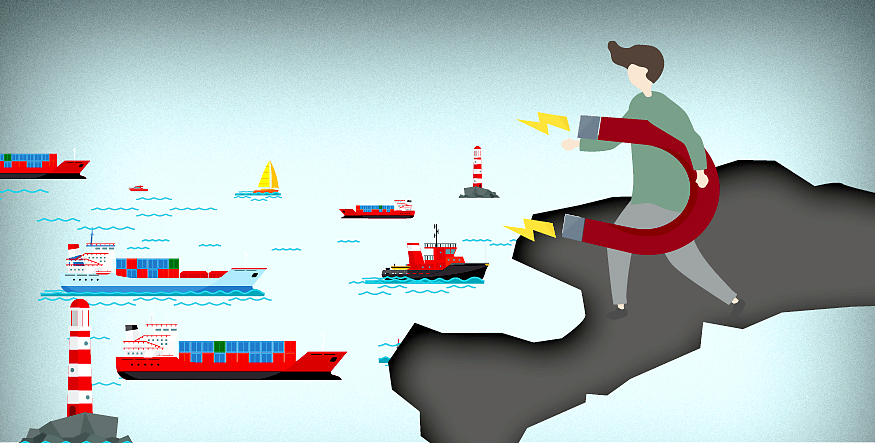 The increase in transshipment volumes was particularly sharp in March this year, but it is not March alone that has provided the boost for the whole of the first quarter of this year. Yes, March had the most cargo, but March was not pulling the quarter out of minuses. All months of the year have seen growth and it started in the second half of last year. For example, the Freeport of Riga started the year with the news that the amount of cargo handled in the port last September was +8% compared to September 2020 and the year was crowned by December with +15.4% compared to December 2020. Each of Latvia's major ports has its own nuances in the cargo growth graph, but the underlying trend is the same.

In more modest terms, it is not about cargo growth, but about recovering from years of losses. The shift from decline to growth is very easy to see in the table below:

It is undeniable that the current rate of increase in percentage terms is also explained by the deep decline in the past. Unfortunately, the current axiom of economics and politics that the ups and downs of capitalism inevitably and naturally follow one another does not apply to each individual company, nor to chains or clusters of companies in a port or a country, nor even to ports and countries.

Crises are a survival technique of capitalism to rid it of its weakest elements. The economy as a whole only benefits from this and enters its next phase of growth. The question is how necessary the ports (and countries?) on the eastern shore of the Baltic and in Latvia in particular will be for the next configuration of capitalism.

At the moment, Latvia's big ports, individually and together, look wonderful compared to Lithuania and Estonia. Klaipėda's 9.7 million tons of cargo handled in Q1 corresponds to a decrease of 13.7%. Tallinn has less cargo (4.8 million tons), a slower decline (-8.2%) and its own passenger story.

In the case of Latvian ports, a very specific question to be answered is what will happen in August this year, when the EU ban on buying Russian coal, whose return to Latvian ports and directly to Riga dictates the increase in tonnage reported here, comes into force. Riga, with 5.78 million tons in the first quarter of this year, has retained the first place among Latvian ports, precisely on account of the recovery of coal cargoes. The volume of oil products handled in the port of Riga has lost another 36% (!) of the first quarter of last year. The volumes of wood and timber cargoes decreased only slightly, even though Belarusian timber was lost.

Will the ban on transshipment of Russian coal in Riga and Latvian ports in general bring cargo turnover closer to zero or not? Maybe yes, maybe no. Maybe by then the war in Ukraine will have given a reason or a pretext to amend the sanctions, maybe Kazakh coal will enter Latvia, maybe Russian coal will be called Kazakh coal... Or the opposite will happen - Russia will neither send nor receive Kazakh, Chinese or any other cargo from Latvia.

For the time being, the mechanisms of economic sanctions against Russia are, at least sometimes, operated in a stand-by mode. Banning Russian ships from European Union ports sounds fine, noble and threatening, until we consider that Russian ships, like most every other ship in the world, are equipped with cheap flags. Similarly, boasting about the 6000 sanctions against Russia sounds impressive, but it does make one wonder whether the sanctions mechanism is not already so convoluted that it is inadvertently or deliberately making it more difficult to enforce the sanctions. Why are these sanctions so fragmented? Are there not more exceptions and reservations than sanctions themselves?

The second largest port in terms of cargo turnover is the Port of Ventspils, with 3.97 million tons of cargo in the first quarter of this year. Ventspils, which was once an oil port, has a minus of 31% in liquid cargo, i.e. oil products, which has been more than compensated by an increase in bulk and container cargo.

Liepāja handled half as much - two million tons - and continues to excel in terms of cargo growth. The port and the city have recovered from the shock of the bankruptcy of Liepājas Metalurgs less than ten years ago. Tons of scrap and molten metal have been replaced by cereals and containers in the Port of Liepāja. Soybeans, for example, are shipped from Argentina to Kazakhstan via Liepāja. Container turnover is supported by ferry lines to Travemünde in Germany and Gdansk in Poland.

For the time being, the war in Ukraine is driving transit cargo to peaceful Latvia, but it does not give any clarity on whether such cargo flows will continue or change in the next few months.

MP Jānis Urbanovičs: I'm not trying to scare anyone, I'm very scared of it myself
Jānis Lasmanis
The last pre-war growth in the Latvian economy
Arnis Kluinis
The biggest price increase in a year since we introduced the lats. Fuel and vegetable oil prices up by a third, potatoes by more than half
Ilze Šteinfelde
Kalvītis was too hasty moving to rubles
Imants Vīksne
Oil prices are not yet at record levels, but fuel prices in Latvia already are
Ilze Šteinfelde
Russia's war tax doubles in a week
Arnis Kluinis