Ferry from Riga to Sweden - now, however and only

The ferry that left tonight from Riga to the Swedish city of Södertälje is not big, not white, not connecting the capitals of the Baltic Sea countries and not attracting thousands, hundreds or even tens of dozens of people, but still, Riga needs at least one cargo ferry line more than the occasional movement of cargo ships across the sea to transport the same amount of cargo.
02.06.2022. Arnis Kluinis 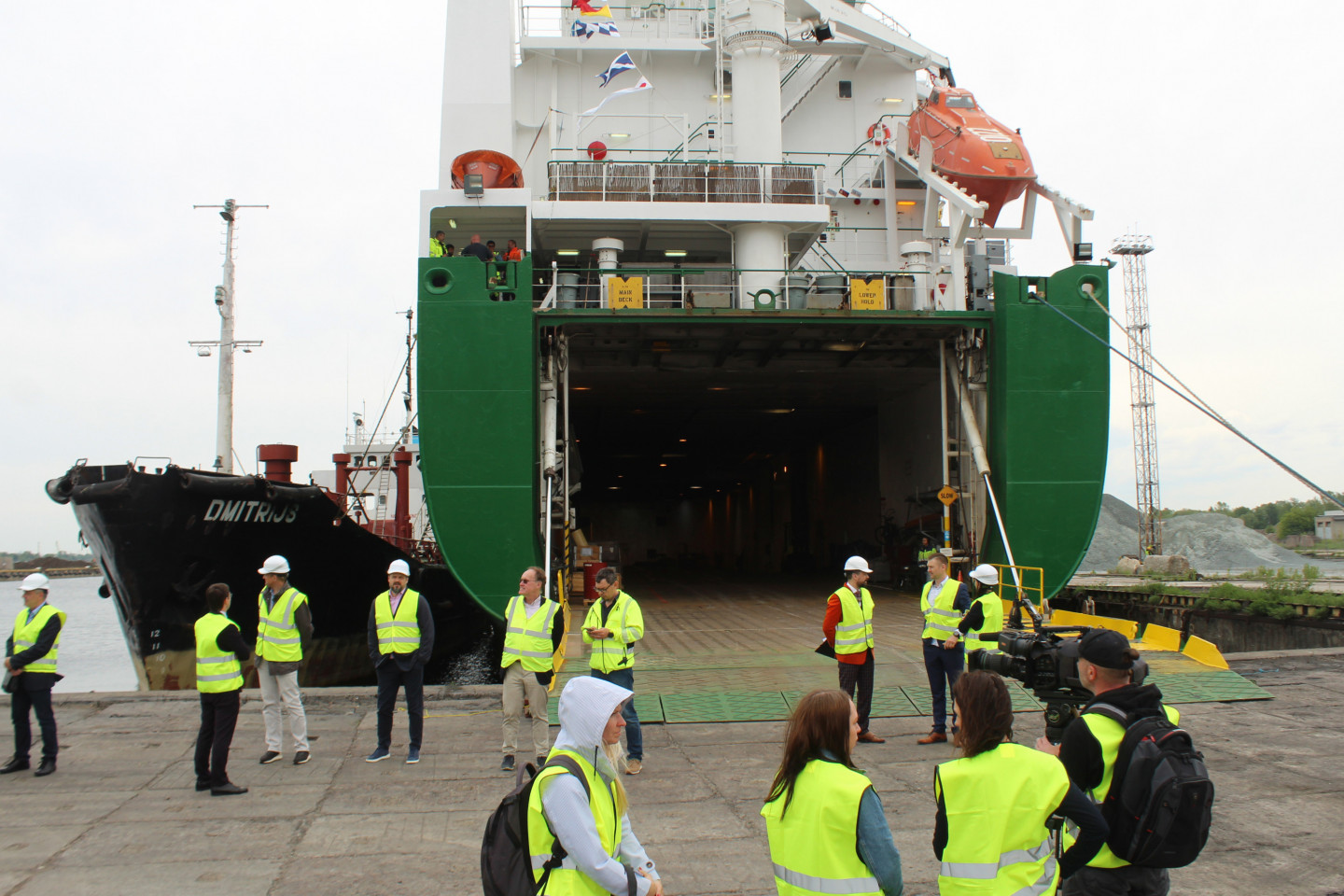 The Ro-Ro Midas ferry service between Riga and the Swedish city of Södertälje, a suburb of the Swedish capital Stockholm, has started. The inauguration of the line took place yesterday around midday, but the ferry was scheduled to depart at 2 am. It should reach Södertälje in 22 hours, so at midnight. The further timetable is 22 hours in the sea and 4 hours in the ports, where the cargo to be brought in has to be loaded and the cargo to be taken out has to be unloaded.

Yesterday, the reinforced concrete structures (pictured) already delivered to the port of Riga, with which the Swedish orders are fulfilled by the Latvian construction company UPB, were waiting to be loaded onto the ferry during the day.

Other cargoes were still on their way to the port yesterday. The difference between a ferry and conventional freight ships is that ferries save time for both shippers and receivers, and allow for a specific time when either the goods must be ready for shipment or the customers must be ready to receive them.

A Ro-Ro ferry (from words roll-on/roll-off) is a vessel designed to carry wheeled cargo (cars, trucks, tractor units, trailers and wagons) which enters and leaves the vessel on its own wheels or on wheeled platforms. In other words, it is a cargo vessel which does not require cranes for loading or unloading. This does not exclude hybrids, whose cargo holds can be filled with both rolling cargo and one that must be lifted. It is much easier to notice another hybrid Ro-Pax (roll-on/roll-off passenger) which combines Ro-Ro cargo and passenger transport. Such ferries tend to dock at berths designed for passenger convenience closer to towns and cities and directly in the city centers where people need to go for business or leisure. Such ferries have long existed in Riga. Midas is served at the Riga Central Terminal pier, which is not too far away, but not too visible from vantage points that can be reached by city dwellers. Midas is indistinguishable from any other cargo ship in appearance. It has four seats in the passenger cabin for drivers, if they are travelling with their trucks.

For Riga and its free port, this is better than no ferry at all, including no ferry to Sweden, despite the fact that ferry service from Riga was planned already in Soviet times. Rolands Gulbis, Chairman of the Board of Riga Central Terminal, pointed out at the opening of the new ferry line that the Soviet-era concrete profile of the terminal area was sloped to make it easier to get wheeled cargo on or off the ship. However, such plans have not yet been implemented. It has happened several times that in the Port of Riga and in the ferry section "ships appear and disappear like ghosts" as Neatkarīgā once already wrote. For example, it quoted Atmoda newspaper of December 4, 1990, which at that time was hot on the trail of an attempt to find out how it could be that "after the first voyage (two from Norrköping to Finland and one to Riga), it seemed that a thriving company had been set up, but after the second voyage, the management of Rino Line unexpectedly sent a telegram to Latvia, saying that the company had gone bankrupt". Subsequently, similar stories were repeated several times in the port of Riga. The public noticed these events with the Ro-Pax ferries, but in the depths of the port, there are also many unrealized plans. For example, the concrete-lined areas of Riga's central terminal meant to serve Ro-Ro vessels were used as a coal port. Now the coal has been moved to Krievu Island (lost in the move, but that's another story) and the historic concrete could begin to serve its true purpose after decades if the current attempt to create a Ro-Ro ferry line succeeds.

This time, the line has been drawn by SIA Scandic Line. The company was registered in December 2021 with a share capital of €2,800, 90% of which belongs to the Estonian-based Scandic Stream group and 10% to Zigmunds Jankovskis (pictured). This in no way means that the new ferry line could be launched with less than three thousand euros. We therefore wish that the line will be able to survive and attract cargo in the foreseeable future, which might already require two vessels departing from both Riga and Södertälje on the same day.

Latvian companies' earnings from wheat exports are almost double the earnings from rail services exports
JPJuris Paiders
One million people in Latvia could be effectively insolvent as early as autumn
Inga Paparde
MP Jānis Urbanovičs: I'm not trying to scare anyone, I'm very scared of it myself
Jānis Lasmanis
The last pre-war growth in the Latvian economy
Arnis Kluinis
Latvia attracts ships as a peaceful port
Arnis Kluinis
The biggest price increase in a year since we introduced the lats. Fuel and vegetable oil prices up by a third, potatoes by more than half
Ilze Šteinfelde