LWU President Arno Jundze: Statistics show that the situation with books is disastrous 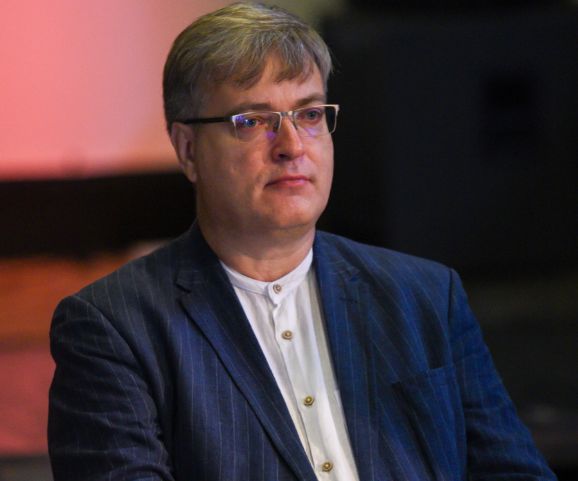 It has been more than a year since the World Health Organization recognized that Covid was no longer an epidemic but a pandemic. What are the good and bad things that this year brought to literature and art?

This year has brought everything to a halt. It is worse for those arts that cannot do without spectators - singers, theaters. Many are at the peak of their creative growth when they should show their magnum opus, but this may pass them by. The opera is closed, the theaters are closed, the concerts do not take place, and we are all missing out on the enjoyment that these arts can give us.

There is a slightly different situation with poetry and prose because we have always been in isolation - I am currently writing a novel and I do not need viewers. Many people isolate themselves in the creative process even without Covid - sometimes they use the opportunity to write in a writer's home or go somewhere away to a quiet place where they are not disturbed.

But we also have a huge loss - what is happening to books. Because if books can't be bought, if the bookstores have been shut down for months, it leaves an impression. Libraries are also closed. If the books cannot be read, then the writer feels isolated. Those books that may have been read and evaluated last year, now no one knows when they will be read. The book, which was supposed to be the bestseller of 2019, may not be very popular in 2021 - unfortunately, there are such market patterns. I already had a hunch, but now the statistics confirm that there is indeed a disaster in the industry.

Yes, Elza Ungure, a researcher at the National Library, has found that the total circulation of books and newspapers has reached its lowest point since the restoration of national independence.

Even the deep economic crises of 30 years have not caused such damage. Previously, if a book was released in two thousand copies, it was considered quite normal. It was enough. However, if the book has 800 or fewer copies, the author wonders why he even writes at all. And there won't be much money from the 800 copies sold. How can a writer make a living?

This is a situation where you can no longer make ends meet with literature, and the authors have to look for another job. But then the question is, will it be possible to combine this other job with writing?

The bookstores are now open - when Vija Kilbloka, the founder and manager of the publishing house Zvaigzne ABC, threatened to go to the Constitutional Court, then this was allowed...

There have always been problems with the book trade. There are months when people buy books a lot, and there are times when they don't buy at all. The best time is December - just when the bookstores were closed. The book trade cycle has been disrupted.

You can buy food by quickly running into the store. But with books, people have always wanted to explore the offering. Now you have to buy the book quickly too. Habits are changing.

Habits change in the manner that readers first research the offer online and go to the bookstore very prepared. But trade restrictions still have a big impact and reduce sales.

The fact that book circulation will be bad was felt already in the middle of last year. I also urged politicians not to worsen the situation of authors, which was already not very good, with new tax changes. But politicians did not listen. They will get to enjoy the consequences of their decisions.

Latvian is the state language, but the circulation of publications is shrinking. Language is not polished on the Internet.

Is it not the case that the digitization of culture has in turn taken a push, a boost?

As for book publishing, I cannot say that there is anything positive. Such a process exists, some publishers publish electronic books, but these electronic books have been declared dead in the world of book publishing - they will never compete with printed books. Electronic books are a niche product - scientific and medical books are experiencing great success, but about fiction, no one says that something could change dramatically, that printed books would no longer be bought. The circulation of the books was stable, but the case of Covid was a blow that has significantly reduced these circulations.

Electronic books are still not easily accessible and available for purchase online due to unresolved copyright issues. The Latvian state is unable to eradicate the pirating website where books are placed without the permission of the authors.

That's copyright. But it also doesn't feel like it's easy, with a few mouse clicks, to access a classic work that is no longer copyrighted. Other countries, such as Turkey, are working harder on this, including promoting literary English translations.

There is also the problem of who will do it? To put a book online, you have to do a lot of work for free. Maybe the state could take care of it, but the state has always lacked money.

What do you mean - it has no money? There is now more money than ever before! A vaccination newspaper will be issued in 825,000 copies immediately. Will there be posters, videos, cartoons, booklets to urge people to get vaccinated? Probably the publication of such a newspaper will have a lot of benefits?

Government people are fighting Covid. But how can you fight it, if you lack vaccines? The only way to fight is to imitate some action.

The Covid vaccination shouldn't have been made into such a comedy. If vaccines were available, people would know where they should go to be vaccinated, as has always been the case with influenza, tick-borne encephalitis and all other diseases.

So the newspaper will be a complete waste of money. Who needs it? There is a cardboard box next to the mailboxes in my apartment building, where this newspaper will be thrown in together with other advertising spam. I even doubt that it will get to me. And I can't say I want to get it, because I doubt there's any information in it that I can't get in another way.

Here you can still go through many circles of hell. Vaccines are currently lacking, but over time it may happen that they will be available everywhere, in three-liter jars for one euro. There just won't be anyone to be vaccinated - desperate doctors will drag passers-by in their vaccination tents. Then what?

It can also happen. People have been tormented for a year, waiting for this to happen - waiting for one month, waiting for two, but nothing happens. Gradually, people become anarchic and stop waiting.

It is also the case that everyone cares for themselves the most. If vaccination finally becomes massive, many skeptics will go vaccinated.

But if the internet is full of the horror stories that Covid was created by the world's mighty to enslave the world, the vaccine is a luciferase made from monkey embryos and is meant to alter the human genetic code? And that vaccination will be used to chip people and control them through 5G towers. And all the vaccinated will get sick and will die like flies.

Yes, yes, everyone knows that the Americans, Israel and who knows what else is to blame. But Israel is the first to be vaccinated. Wise people know what they are doing. I do not think that the Israelis want to destroy and chip themselves. These theories are very stupid.

Perhaps the only positive thing is that this unexpected Covid situation is probably encouraging creation, presumably, books and films inspired by Covid are being made - like The Plague by Albert Camus or Decameron by Giovanni Boccaccio.

Yes, social networks are very conducive to urban folklore because everyone can share their theories. There have always existed horror stories - fairy tales are horror stories. Because people like to scare each other and scare themselves.