Prosecutor General Juris Stukāns: I call for the publication of materials of the loud criminal cases (Part III) 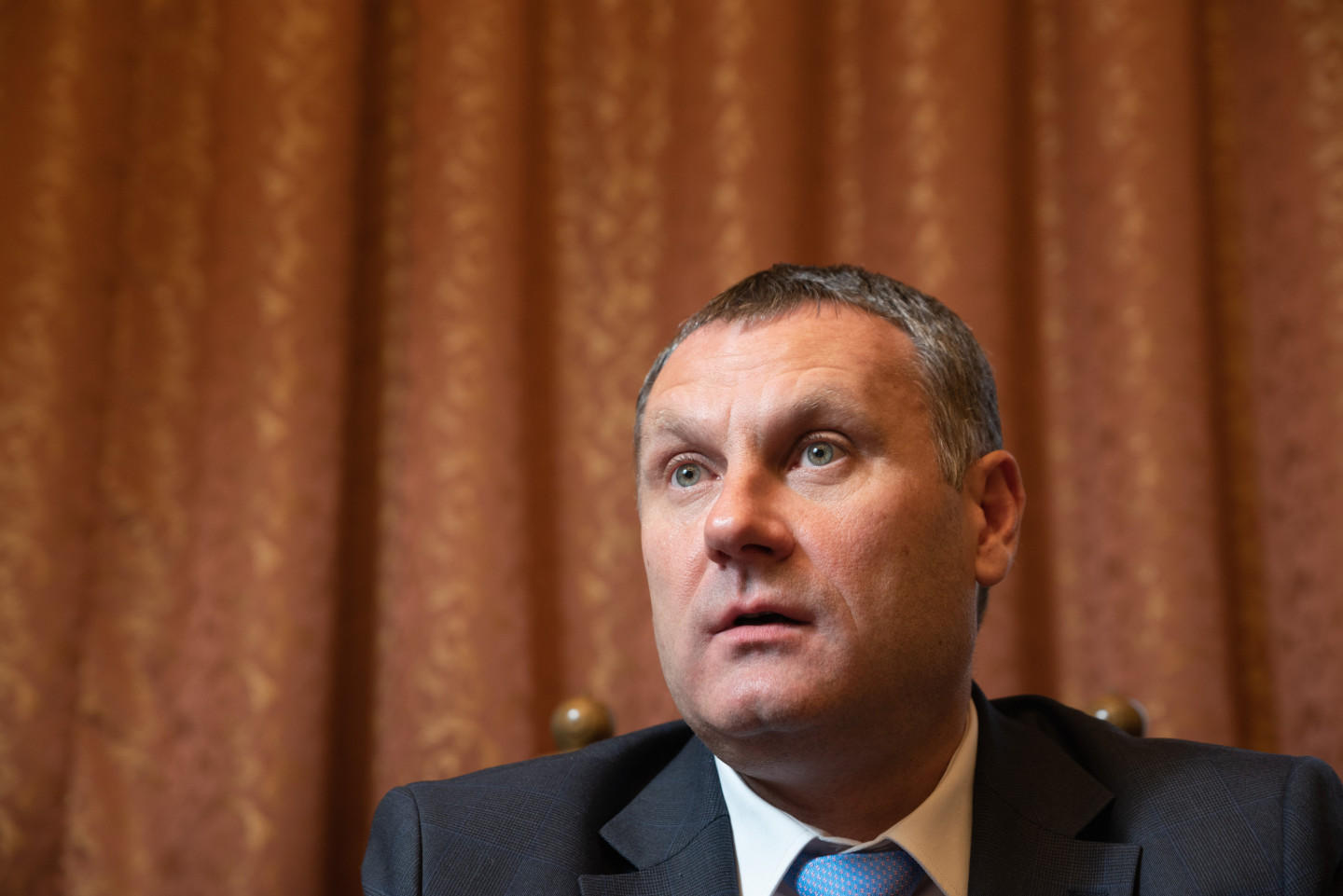 PROSECUTOR GENERAL PROJECT JURIS STUKĀNS: "In controversial cases, I always call for the publication of all criminal case materials so that the people can see who is right." ©Vladislavs PROŠKINS, F64 Photo Agency

(See part I of the interview here and part II here.)

Judge Irīna Jansone was appointed Deputy Chairperson of the Riga Regional Court a few days before reading the judgment in the Lembergs criminal case...

It's a coincidence! I guarantee it!

Yes. You also took the same position when the so-called digital TV case went on appeal.

No, no. It was probably not when the case went on appeal, but before the appeal. Anyway. What is your question?

My question is: will it be easy for a judge to decide a case in which her boss has handed down a conviction?

I tell you, in 18 years, no one has ever imagined doing so, because it [that the chairperson of the court can determine something] does not follow from the law and its meaning. The title of the chairperson has no bearing on the case or the judgment.

In court, the prosecutor's office is one party; the other side is defense. The court must listen to both parties.

When you ran for the post of Prosecutor General, there was such optimism that fresh air of objectivity might enter this house as well. After a year and a half of work here, do you feel that you are as objective as when ruling the court, or are you already on the side of the prosecutor's office?

No. When communicating with colleagues, I sometimes misspeak and call the prosecutor a judge.

The answer is very simple: I personally, Juris Stukāns, cannot simultaneously consider that the evidence is sufficient for me, and at the same time say that the person is justified. I have to examine the arguments of guilt and innocence, and only when the argument of guilt is enough for me to convince another person that a particular person is guilty can I go to court. The prosecutor may prosecute if he is subjectively convinced [of guilt]. Therefore, sometimes it happens that the prosecutor says that the person is guilty, but the court says that he is innocent. This is because Juris Stukāns is here, but there is, for example, Madara. According to Madara, that threshold of evidence has not been reached. The case can therefore be appealed to the next instance. There will always be doubts. The law sets a reasonable threshold for doubt. There can be no objective court, the court is subjective. There are therefore three instances in which these prosecutor's allegations of guilt can be examined as far as possible.

Everyone may not have felt it, I have felt it. No. It is just work organization. The court must also work five working days. About the same Lembergs case. I was evaluating the digital TV case. At the same time, the case against Lembergs came. At that time, we had only one courtroom in the district court, which was equipped with audio equipment. Everyone was aware that both cases would take years, not months. So, along with Judge Boriss Geimans, who received Lembergs' case, I said that he could use this room with equipment two days a week. At the initial stage, we had no choice. Later, other halls were equipped with equipment. So Geimans was told - here you go, you can have room 32. At the moment, by the way, we are talking about the principle of continuity that previously existed in criminal proceedings. You can research what this means in the archives. At the end of the case, the judges sat in the office until the judgment was written, both at night and on weekends. They left the office only when the verdict was ready to be read. Over the years, this principle of continuity was abolished and it was said that a judge could oversee several cases at the same time. I was the Chairman of the Criminal Chamber at the time and that's how it was. Boriss Geimans was called - well, how can one case take you ten years? He was summoned and provided with the material and technical facilities to go to the courtroom every day and to judge. If a judge entered the hall and worked the case every working day, even the very same case of Saeima Members, it could be finished in two weeks. That is the essence of the principle of continuity.

So there is no interference here, this is an opportunity. The state must be responsible for this. There were several judgments of the European Court of Human Rights against Latvia, where it was acknowledged that the Convention on Human Rights was violated in Latvia by prolonged proceedings.

When the Judicial Council had to vote for your successor in the Riga Regional Court, between two candidates, Judges Guntars Stūris and Irīna Jansone, did you vote for Jansone?

I will be honest, I do not remember how I voted. Wasn't it that I abstained?

But I swear, do not remember at the moment. The Judicial Council should be asked to reveal the votes. But I would not argue for one or the other at the moment. Wasn't it the case that I abstained? Well, at least I try to abstain.

Why is she better than Guntars Stūris?

And you were one of the members of the commission?

I was, but... do you think that was the most important vote?

I don't remember. Mr Stūris performed the duties [of Chairman of the Criminal Chamber of the Riga Regional Court] for six months. Therefore, it cannot be said that he would be less appropriate. But both cannot be appointed. Only one can be appointed. Well then, one had something more positive or convincing than the other.

I asked this for a very simple reason. From the sidelines, it looks like this position has been given to the judge in advance to convict Lembergs.

No, definitely not! Knowing the judge, knowing the composition - she did not make the decision alone. It was adopted by three judges. If two judges had a different opinion, she would have no choice but to make the opposite judgment. It really is a coincidence. It has nothing to do with the verdict. I can tell you with 100% certainty that it is not possible to write such a voluminous judgment in two days. I can tell you that they prepared the judgment they had agreed in the deliberation room at least 14 days before it was read. It is objective and normal.

Of course, ideally, judges are independent, unaffected by opinions and so on. Life shows, however, that judges are being brutally influenced even by their political supervisor, the Minister of Justice, for example, in the case of the Limbaži judge.

There are many different expressions. One should always be careful and accurate. And here I agree with you that from the outside, a reasonable person wonders why we should talk about it at that moment. There is a statutory procedure, and the prosecutor has lodged a protest and will fight the case further. If we criticize or in any way point to the work of the courts, officials must be very careful not to create doubt for people from the sidelines, [the view] that this decision is biased or influenced. This is very important.

Anyone who states or claims something has a duty to explain and also to be accountable for their statements if they have crossed the line. I do not agree that people do not understand or see anything. They see, analyze, evaluate. I do not think that if an official unreasonably claims something in this way, they gain points in the eyes of the electorate.

In such cases, I always call for the publication of all criminal case materials so that people can see who is right. And I am sure that people will be much tougher in their conclusions than the judges.

The press has written about the contacts of your predecessor Jānis Maizītis with the US Embassy, ​​including overseas instructions and orders.

The website of the Prosecutor General's Office is decorated with information that on September 29 there was a meeting with Delna and representatives of the US Embassy also participated. Ethics were discussed.

Was I there? I wasn't there.

I just wanted to ask why the foreign-funded organization Delna was chosen as an ethics consultant?

The State Audit Office had stated in the opinion that we should revise the code of ethics. Why Delna? They are probably familiar with ethical issues. I can't say anything right away. But what's wrong with that? We are preparing a new version of the code of ethics. For that, we attract knowledgeable experts who at least consider themselves knowledgeable in questions on ethics. The code of ethics is a very important document for the prosecutor. Violation of the code of ethics also entails liability. Therefore, they have been working on the code and listening to experts with great care for more than six months. The code will be approved by the Council of Prosecutor General. They are probably involved in identifying experiences, identifying specific issues that would be relevant to the code. If we had involved them in the investigation of a criminal case, that would have been illegal. But this is more of a public aspect here, and the code of ethics is a public document. Why Delna? I don't know who chose them. Maybe the same State Audit Office pointed to them as a source from where to get ideas?