Chief Justice of the Supreme Court Aigars Strupišs answers questions from Neatkarīgā about the quality of court judgments and the independence of judges, as well as discusses the quality of services that courts receive from the Ministry of Justice.
30.11.2021. Uldis Dreiblats, Ritums Rozenbergs 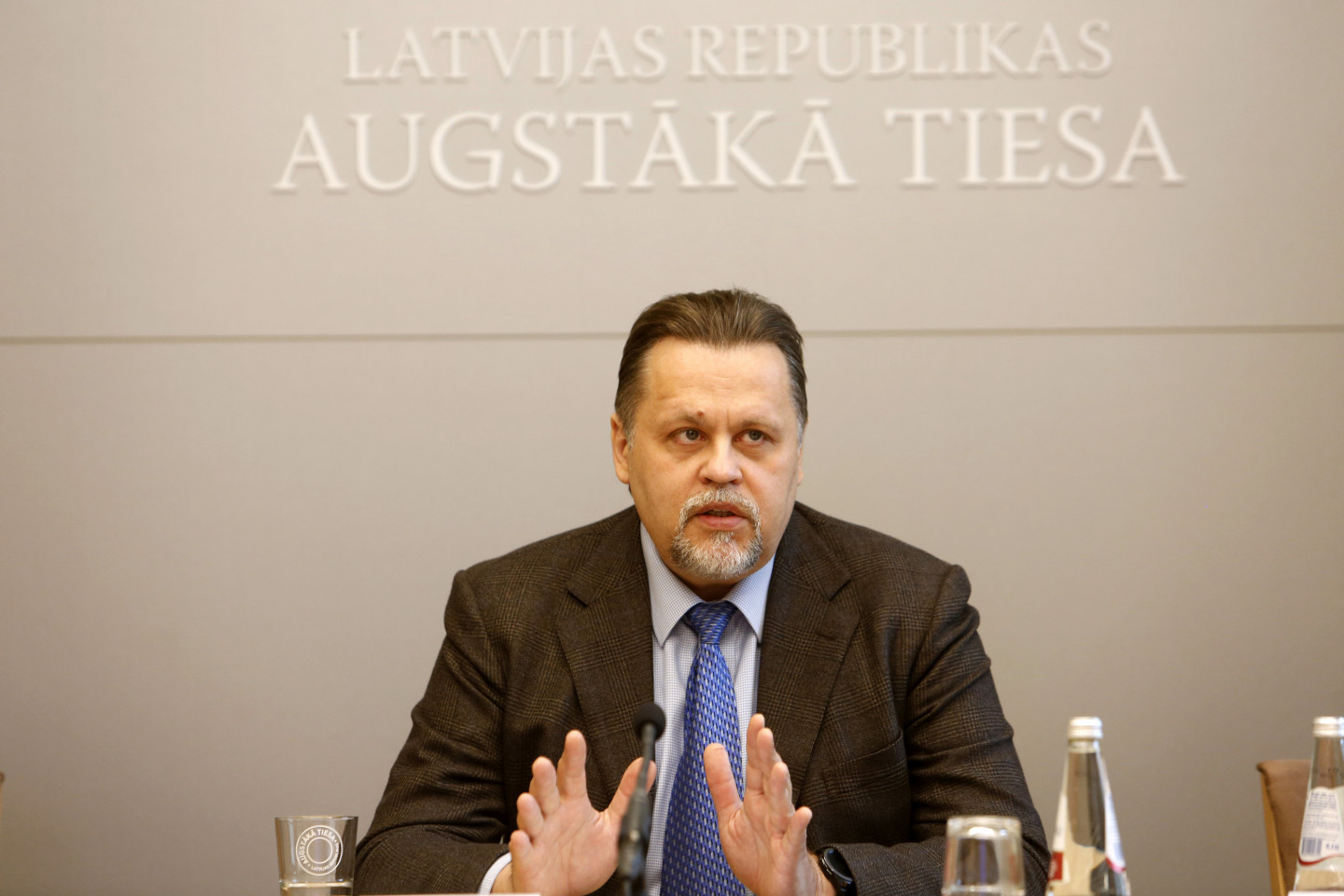 When you took office, your motto was to improve the quality of court judgments. Have you managed to achieve anything in this area?

Yes. It is really a work in progress. I have been in office for a year. Understandably, writing a good quality judgment is something you must learn. Our judges are virtually all autodidacts. None of our judges are trained to be judges, as is the case in many other countries, where you spend a year or two learning how to be a judge. There, they are taught both how to conduct hearings and how to write judgments. We have never had that. We have short-term training for judges, some lectures, seminars that judges attend a few times a year. There is no systematic long-term training on how to become a judge. I would also really like it if a judge could be trained to write a quality judgment within a month. If a person has learned to write a judgment on his own, it is very difficult to break that experience. Going back to what we have done, first of all, we have organized a training process for judges on how the cases should be handled. The methodology of evaluating a case - where to start and how to go through the case step by step. This is the first step towards a quality judgment. For this to work, judgments need to be analyzed and they also need to be criticized. For example, an international seminar on cassation judgments will be held at the Supreme Court on December 3. The event will be attended by colleagues from the French Court of Cassation, who changed their methodology for preparing judgments a few years ago. We want to learn from their experience and the aim of this seminar is to improve our judgments. Based on this experience, the Supreme Court will also issue guidelines for judges. We have given guidelines to the Judicial Training Centre that there should be more sessions aimed at improving the quality of judgment writing and case handling, with the emphasis on practical sessions rather than on talking and lecturing. Their program for the coming year already takes this into account and incorporates it. Work is in progress and I hope that the first results could be seen in a year and a half because a lot of work is being done in this direction.

Do you think that a judgment can be considered to be of good quality if it simply copies the accusation with all the grammatical errors?

I would have to look at the specifics. If the accusation was well-written, why not? It is very difficult to talk about this theoretically, you have to see the specific case. Maybe the accusation is so brilliantly written that there really is nothing to add or subtract.

But it is not good that mistakes were also transferred to the judgement.

That is a more complicated question. The European Court of Human Rights has said that it is not necessary to answer every argument that is irrelevant to the case. But a judge has to be very careful when assessing whether or not an argument is relevant.

If a judge does not substantiate why he rejects one argument or another, it leaves a bad impression.

A party cannot understand why what he said is not being taken into account.

Not every argument needs to be assessed very broadly. Two or three sentences are often enough to explain why it does or does not make sense. So judges, especially in criminal cases, where the bar is higher because criminal justice is more strongly concerned with human rights, should pay particular attention to this. Of course, there may be situations where the defense puts forward some arguments just to stall time. If the argument is sensible, it should be stated, however briefly, why it is or is not relevant to the proceedings - two, three, four sentences are quite enough.

In the case of the Limbaži judge, legal professionals said that the statements of Jānis Bordāns and the head of the Legal Affairs Committee, Juris Jurašs, were pressure not only on the judge who made the particular decision, but also on the court of appeal. Therefore, my question is: is it easy to judge objectively in an appeal instance when the President of the same Court has previously passed a guilty verdict? That is to say, the President of the Court has given a conviction at first instance, but her subordinates then have to judge the appeal?

In principle, the determining factor should not be what the President of the Court says. The President of the Court is not the judge's boss in the administration of justice. The President is the boss in the organization of work, in the allocation of cases, but not in the administration of justice. So we are back to the same question of the judge's backbone. But there is one factor, and you may be partly right about one thing. In the survey of judges that I mentioned earlier, there was a tendency that the President of the Court might not always respect the independence of the judge. The survey did not go into detail as to why the judges felt this way, and there were not many judges who felt this way - less than 20% of the total number of respondents.

If the President of the Court violates the independence of judges, these judges should go to the judicial self-government institutions and report it.

No presiding judge should be influenced in the administration of justice. If the President of the Court does so, then this is grounds for very serious liability. Whether this actually happens or whether it is simply human relations, personal conflicts, is a question for the next study. We want to go deeper into each of these issues.

On October 28, an extraordinary meeting of the General Assembly of the European Network of Councils for the Judiciary was held in Vilnius, at which Poland was expelled from the European Network of Councils for the Judiciary. As we are doing this interview, the General Affairs Council of the European Union is meeting to consider a report on the situation of the rule of law in Latvia. Could Latvia, because of the actions of the Minister for Justice, Jānis Bordāns, be facing the fate of Poland, where the judiciary is politically influenced and loses its independence?

At the moment, I do not see this as a risk factor, because there are no real acts of political influence. It is simply a question of some kind of conflict, which, of course, has a negative impact on our work and distracts attention from the main things. I hope that this is not done with the aim of preventing the big tasks from being done. But nothing is happening that could institutionalize this dependence of the Court on the executive. The Poles amended the law to make it so that judges can be appointed through the executive - to put it simply. Actually, it is a more complex system to get persons loyal to the executive to be appointed to the judiciary by the executive. In Latvia, this is not yet the case. I met Polish colleagues a few years ago. They told me all this, and I did not believe that something like this could happen in a modern democratic country. I asked: why didn't you do anything? They said, "We did not believe that something like this could happen, and by the time we realized what was happening, it was too late." So we must always be ready.

I hope you and your colleagues, the Latvian judges, understand that this can happen?

But it can only happen through amendments to the law. As soon as something like this comes up, the alarm should immediately be raised.

On the introduction of e-case. A lot of money is being spent to have all the court files and court cases in the e-system so that no one is running around the corridors of courthouses with folders and bags of folders, because everything will be available on the computer. Your colleague, Sanita Osipova, has already expressed concern that something is not quite right with these e-cases: a lot of money is being spent, but people are not being trained; staff have no idea how it will all work. What is your opinion - is there a waste of money going on behind your back under the cover of the needs of the judicial system?

That is one of the reasons why the Judicial Council is working for the independence of the judiciary. The services that the courts receive from the Ministry of Justice are of poor quality. This also applies to this e-case. I am sorry to say that, but sadly that's how it is. You said it right. The implementation is being rushed. Nobody really knows anything yet, judges do not know anything either, nobody has been trained. We have raised this issue two or even three times in the Judicial Council, but the chaos has only continued. That is a problem. I would hate to see the work of the courts stop or slow down significantly on December 1, just because the system is not ready for it. What is currently being promoted as the e-case is not an e-case. It is a record-keeping program. You can find documents there, but it is not suitable for a judge to evaluate a case effectively in a courtroom. E-case could be the next level, which does not exist at the moment. And this is not just some "judicial whim", because the State Audit Office has said the same thing, and the prosecutor's office also is not happy about this project in its current form, to put it mildly.

Unfortunately, we have been thrown into muddy waters without our consent and participation, and we must do everything we can to avoid sinking.

Because our work determines how people's right to a fair trial will be realized. We are currently looking for solutions to urgently remedy the problems we foresee. We are talking now about issues that should have been clear a year or two ago. This is another reason why the courts must become organizationally independent of the executive.