MEP Inese Vaidere: Incorrect information is being spread about the removal of the monument to the legionnaires

The Latvian media has reported that it has been decided to remove the monument dedicated to the Latvian legionnaires who were prisoners of war in Zedelgem (Belgium), which was unveiled in the town in 2018. However, the MEP who has been following these events believes that incorrect information is being spread.
07.12.2021. Jānis Lasmanis 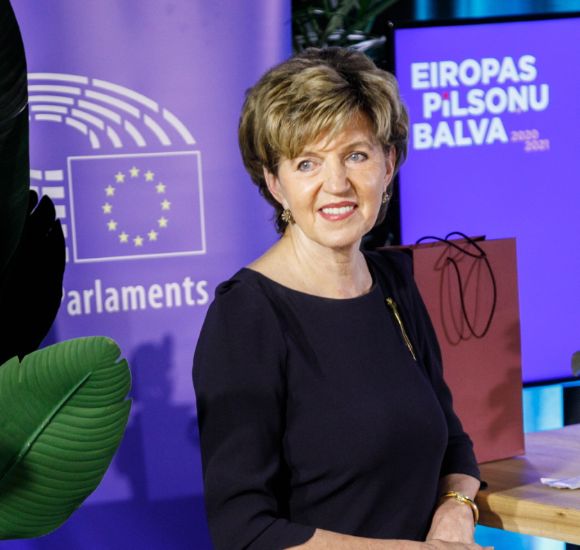 The Delfi news portal had found out that the municipality of the small town started paying attention to the monument after the columnist Lev Golinkin, in a series of articles on the US website Forward.com, summarized monuments and memorials around the world which, in his opinion, glorify Nazism and the murderers of Jewish people. It was in the wake of Lev Golinkin's publication, that discussions began in the Belgian media.

In the summer, the Latvian MEP Inese Vaidere also addressed the issue and, on her initiative, wrote a letter to the municipality of Zedelgem. In it, the MEP explained that the Latvian legionnaires were mobilized in Nazi forces against their will and that it was internationally recognized that the Latvian legionnaires had no connection with Nazi crimes against humanity. It was also stressed that it was Soviet propaganda that created the lie that our legionnaires were comparable to the Nazis, and that this disinformation is still being actively spread by Russia.

The Latvian Ministry of Foreign Affairs was also involved at the time. The Ministry of Foreign Affairs contacted the Latvian Ambassador in Belgium and found out that the municipality had never intended to dismantle the monument and that no action was planned for the plaque. However, things did not seem so simple to Vaidere, especially since the plaque had already been removed.

The Latvian media had reported that, despite the involvement of MEPs, the monument to the Latvian legionnaires in the Zedelgem prisoner-of-war camp would be removed. The politicians were not involved enough, they did not explain enough, is there another reason for this decision of the municipality?

There is incorrect information being circulated that the monument has been decided to be removed. This is not the case, because only the municipality of Zedelgem can make such a decision, and there is no such decision. In order to clarify this issue, the municipality organized a discussion with representatives of various interest groups, including historians from Latvia. During the discussion, they managed to prevent hostile attacks and misinformation, which are clearly linked to the interests of Russian politicians. The participants in the discussion have come to the conclusion that the monument could be moved, but it is too early to talk about this, as there is no such decision. On Wednesday, the Latvian Ambassador to Belgium will visit Zedelgem to talk, to explain our position and to understand what the municipality could do.

The situation is, in my opinion, nothing extraordinary, because if I were the head of the municipality, I would also want to consult a wider range of people.

For the time being, it is not clear what will be done with it after the removal. The municipality has been advised to put it in another place. If the monument is moved, where do you think it should be placed?

I think that the suggestion to move the monument to the place where the camp was physically located is not a bad one. In addition, it is recommended that an explanation of the historical context be added to the monument.

It is now 30 years since independence was restored, but there is still a lack of understanding in the European Union, let alone in the world, of our history and the history of the Baltic States as a whole. Why have we not been able to explain it in these years, not even to our closest allies?

I would not say so. Understanding has increased enormously over the last 30 years, and especially over the last 17 years that we have been in the European Union. Despite the constant efforts of our enemies and their representatives to maintain historical myths about various historical aspects.

We have done a lot, but it is also impossible to explain everything to everyone, because we also have to work with new people all the time, which is why I continue to do this actively, including in the European Parliament's Historical Remembrance Group.

Of course, it is much easier to agree with everything you are told than to argue and justify, but it is a work in progress.