MP Možvillo: Everyone is waiting to hear from the German Embassy

Very serious accusations against the Latvian state have been spread in the German-speaking European audience, but the officials affected by the Bild publication have been silent for a month and a half, allowing the half-truths and lies made up by two has-been bankers to settle into one fundamental conclusion about our country - Latvia is a country that steals. Māris Možvillo, a Member of the Saeima, is currently the only politician who is not at peace with this and is demanding that Latvia's reputation be protected.
21.12.2021. Imants Vīksne 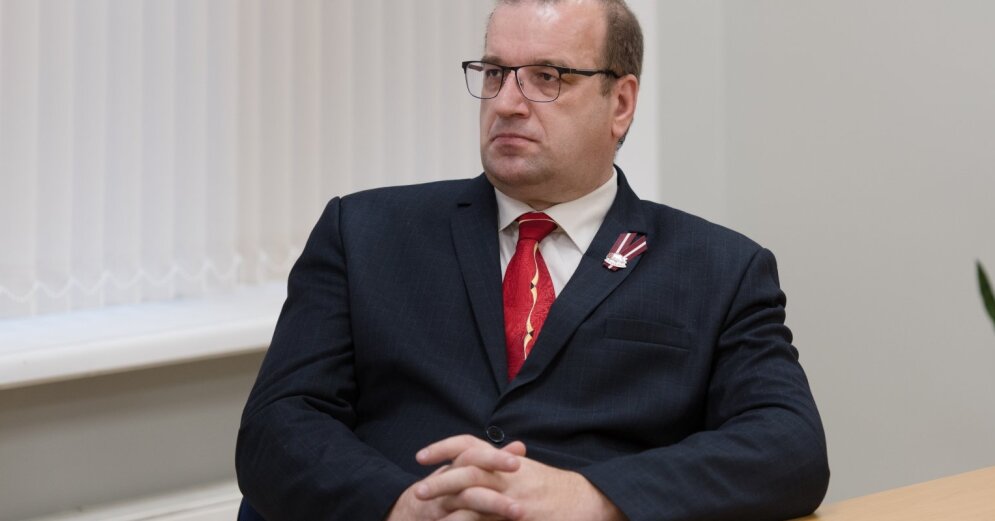 The source of the scandal is Europe's biggest newspaper Bild and its article: "Mafia crime thriller in Latvia. Ex-BND chief and ex-Nato boss victims of a crazy 'bank robbery.'" The publication reports that North Korean billions are being laundered in Latvia, that our supervisory authorities are covering up a flood of dirty money from Russia, that the Minister of Justice and the head of the Legal Affairs Committee received a 500,000 euros bribe to allow the robbery of PNB Bank, and that the head of our government is covering up corruption at the highest level. Even without a magnifying glass and without investigation, it is obvious that most of this information is lies spread by two crooked bankers for their own interests. However, Neatkarīgā also reported that "Latvia's reputation will not be defended against the slander published by Bild." And this does not seem logical. Nor does the conspiratorial silence of the ruling elite. Māris Možvillo, a Member of the Saeima, has appealed to the Defense, Internal Affairs and Corruption Prevention Committee to assess whether the information mentioned in the publication is true and whether it poses a risk to the reputation of the officials and the image of the country. More about this in Neatkarīgā's conversation with MP Možvillo. 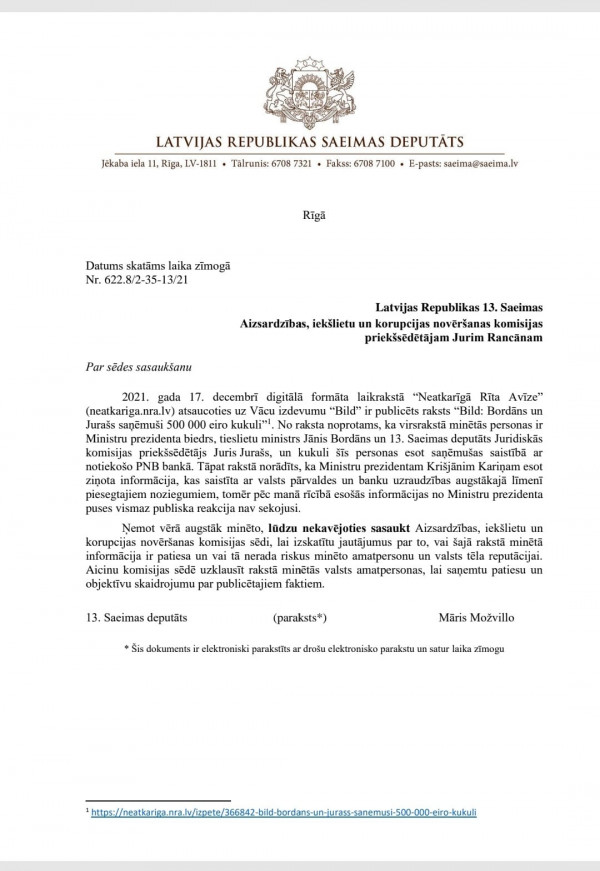 Why are you asking for the meeting to be convened, and is there any response from the head of the committee, Rancāns?

He might not convene the meeting if it is about Bordāns and Jurašs. It is the choice of the chairman of the committee. That is why I am making this letter public - for the sole purpose of showing whether or not he will do so.

The response to the Bild article has been minimal here, even though it is information that has been disseminated to a huge international audience. Are you the only one who thinks this is important?

I have no agenda, no agreements and no dealings with the JKP, with Bordāns and with Jurašs. I take my mandate too seriously to allow such a scandal to affect our relations with Germany as well. In this case, I have nothing against them personally. I would like for Rancāns to convene a meeting - to assess the various risks. So we wouldn't sweep this matter under the rug. That is why I am speaking publicly.

Anyway, on the other front, there has been silence after the article by Neatkarīgā. I think everybody is waiting to hear what the German Embassy has to say.

If the Prime Minister is involved, as the article claims, if former NATO Secretary General Rasmussen has also said something in this regard - let us compare Rasmussen's words with those of Bordāns, Jurašs or Kariņš in Europe. This is very serious!

It is clear already now that the Bild article is very much a lie. Take North Korea, for example. Blatant lies. Is there any chance now to say on behalf of Latvia: you have lied and you can't do things like that? Okay, we understand that everything is happening because of one banking scandal and one legal case, but the German-speaking world has been told that we are all thieves here.

My aim now is not to find if Jurašs and Bordāns are guilty. My aim is to assess these risks. What are we going to do as the Defense Committee? We have to think about this. This is a matter for the committee, no one else. It touches upon both corruption and, to a certain extent, internal affairs.

And the reputation of the country.

But perhaps Kariņš, as head of government, should have his say. Or send a complaint to the German embassy.

But there is complete silence. And that scares me, that everything is not really clean there. If it were a lie, the very second after the article appeared, JKP would be posting video messages and whatnot. But at the moment it is as quiet as a graveyard. A couple of years ago, the program "Nekā Personīga" already asked where Jurašs suddenly got 500,000 euros, but he could not explain where he got it and where he spent it.

Could these be related?

Well, apparently there is something there. But again, my submission is not to investigate their guilt or innocence. My proposal is based on the need to assess reputational risks. That's it. I will not call on the committee to investigate this corruption case until there are concrete facts.

Comments [1]
Aivars Lembergs: Everything possible is being done to make me die in prison
Uldis Dreiblats, Ritums Rozenbergs
Former KNAB chief Normunds Vilnītis: Law enforcement agencies have become the political order desk of the ruling parties
MKMāris Krautmanis
EP Vice-President Roberts Zīle: Now the attitude is noticeably friendlier and more receptive
Jānis Lasmanis
MoD Pabriks: We are not considering sending troops to Ukraine
Imants Vīksne
Government's failure to tackle the energy crisis will urge people to take to the streets
NNeatkarīgā
MP Krišjānis Feldmans: It is impossible for the Saeima to reduce VAT on energy by bypassing the government
Jānis Lasmanis