"Something happens here almost every day," says Laima Linuža, editor-in-chief of the newspaper "Ludzas Zeme". Yesterday a man came and threatened to burn down the editorial office. The police have been informed. "As soon as we said that we were against Russian aggression in Ukraine, the attacks started against us," continues the editor-in-chief. Today, a conversation with Laima Linuža.
22.03.2022. Elita Veidemane 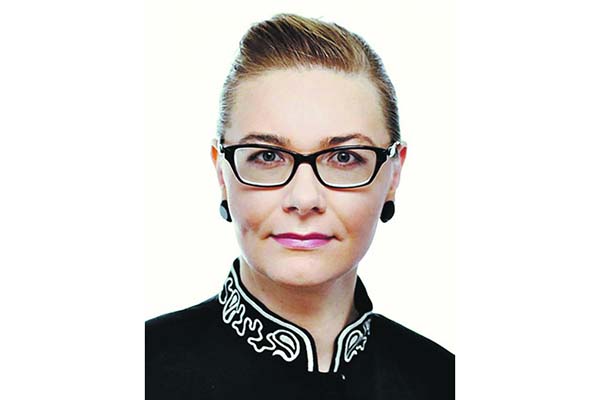 Laima Linuža and the newspaper's editorial board declared their principled position in the article "We will not give away Latgale! Never!", which provoked outbursts of hatred from the supporters of fascist Russia, which, it seems, will not stop for a long time. The article can be read here.

The saddest and most dangerous thing is that fascist propaganda has already strongly influenced and continues to influence the people of the border region - Latgale in particular - many of whom have become convinced recruits of the 5th column. The situation near the border is much worse than the gentlemen of Riga, sitting on their thrones, have imagined.

I know that Edgars Mekšs, the head of the Ludza municipality, made it clear when the Russian invasion of Ukraine began that he supported Ukraine.

Yes, he did. Of course, a storm immediately broke out on Facebook, with people saying, "We will not vote for you!" As I explained in my article, "Local politicians either stay silent to avoid losing the pro-Russia electorate or, after expressing support for Ukraine, start to worry about whether they will be elected in the next elections."

I have never understood it: how is it possible that in Latvia, where you can get truthful information about the war in Ukraine without putting in any effort, there are still people who get things so wrong.

Those who live near the border still watch Russian television. There, they do not even need to have a satellite dish: just turn the antenna and that is it. You can watch Russian TV for free. But the Latvian TV signal does not reach them, and it has been like this for years. Can you really expect anything else?

You wrote about not giving away Latgale. Was it not risky, in a place where many people are so aggressively anti-Ukrainian and so accepting of Putin's atrocities, to side with Ukraine so clearly?

Of course it was risky. But we realized that to remain silent was even riskier. Our newspaper is published in both Latvian and Russian, and I was asked if I was afraid of the print circulation decreasing by taking a clear stand for Ukraine. I realized that now I am no longer afraid. And I also realize with my heart that I really want to liquidate the Russian newspaper... But my mind says: then the Russian audience will not get any true information at all. Yes, I am supposedly maintaining the fact that they only read Russian and don't learn Latvian, but now it is clear that this is no longer a national issue, it is an issue of informational brainwashing.

Does the municipality of Ludza still maintain friendships with some Russian municipalities?

The head of the Ludza municipality said that this would be put to an end. Who could have believed that things would turn out the way they have? Now many people realize that it's better not to tangle with Russia.

I hear around me that people are disappointed when they realize that one of their friends is suddenly supporting the aggression of fascist Russia.

I have had that disappointment myself. I took some Latvians I considered friends off my friends list because it turned out that they supported Putin's actions... That shocked me. They work in state structures, everything is fine, salaries are good, but it turns out that their dreams come with Russian subtitles...

We discussed this topic with the head of the municipality... It's horrifying. About 70% support Putin.

Only now are we seeing the true size of the 5th column and the mountains of flowers with which these people will surround Russian tanks if they come here.

I am afraid that for many Latgalians the concept of national confidence is alien, everything satisfies them (except the government). But Russia is not suspected at any point by these many Latgalians. Just read what is being posted on Facebook! Everything the West shows from Ukraine is allegedly fake.

In Latgale, this perception is simply tragic. And this is not hysteria on my part: if I were alone in thinking this, it would be different. The mayor of the municipality receives calls from residents every day, and he agrees with me: the situation with awareness is tragic. Edgars Mekšs said that he would join the National Guard because, if the Russians invade, he will be the first to be shot.

The tragically low level of situational awareness is not only in Latgale. It is also in Riga, Jūrmala and elsewhere.

Who is to blame? There has been no education of the people, no inspirational leaders... When Russia occupied Crimea eight years ago, all those Russian propaganda channels should have been closed down then. Now it is too late, many people have been poisoned. Also on social networks, people near the border are sharing more pro-Russian information.

But... If I thought it was impossible to influence the situation at all, I and my like-minded people would keep quiet. However, I believe that if we work hard, we can make a difference. We will continue to convince people with our newspaper. Of course, some subscribers will leave, it's a pity... But we have to do what we can.

And what can the state do in this case?

Support us, not let us be cut down...

...by Putin's local friends. By the way, the mayor of Daugavpils, Andrejs Elksniņš, is proposing to organize a shashlik grilling event on May 9 in Daugavpils' Dubrovina Park - in case the "victory" celebration is banned. What's your opinion about grilling shashlik on May 9 in Ludza?

I think that nothing of the kind will be allowed here, because the Minister for Environmental Protection and Regional Development has also called for no such celebrations, and we absolutely support this. We should finally forget about the "great victories of heroic Russia".

But there is also another aspect. The Minister can, of course, call for it, but what will happen here on the ground? There may be spontaneous or organized gatherings, provocations. Anything is possible here.

Chinese Ambassador Liang Jianquan talks about China's assessment of Russia's invasion of Ukraine and global security challenges
JPJuris Paiders
LRA President Jānis Jenzis: Tourism and restaurants are the first things people start saving money on. We won't have an easy autumn
MKMāris Krautmanis
Singer Marija Naumova: May peace be in our hearts
Santa Raita
University of Latvia Rector Indriķis Muižnieks: I'm bothering someone. But not the university
Elita Veidemane
Dancer Vija Vētra: I would also like to write a book
Santa Raita
MP Marija Golubeva: The President must also intervene because this is becoming a constitutional crisis
Jānis Lasmanis