MP Valērijs Agešins: The day on which some people celebrate that we are part of the EU will have a tinge of mourning

On Thursday, the Saeima passed amendments to the Law on Financing National Defense to the committees without objections, which envisage a gradual increase in the defense budget starting next year, to reach 2.5% of the projected gross domestic product in 2025.
08.04.2022. Jānis Lasmanis 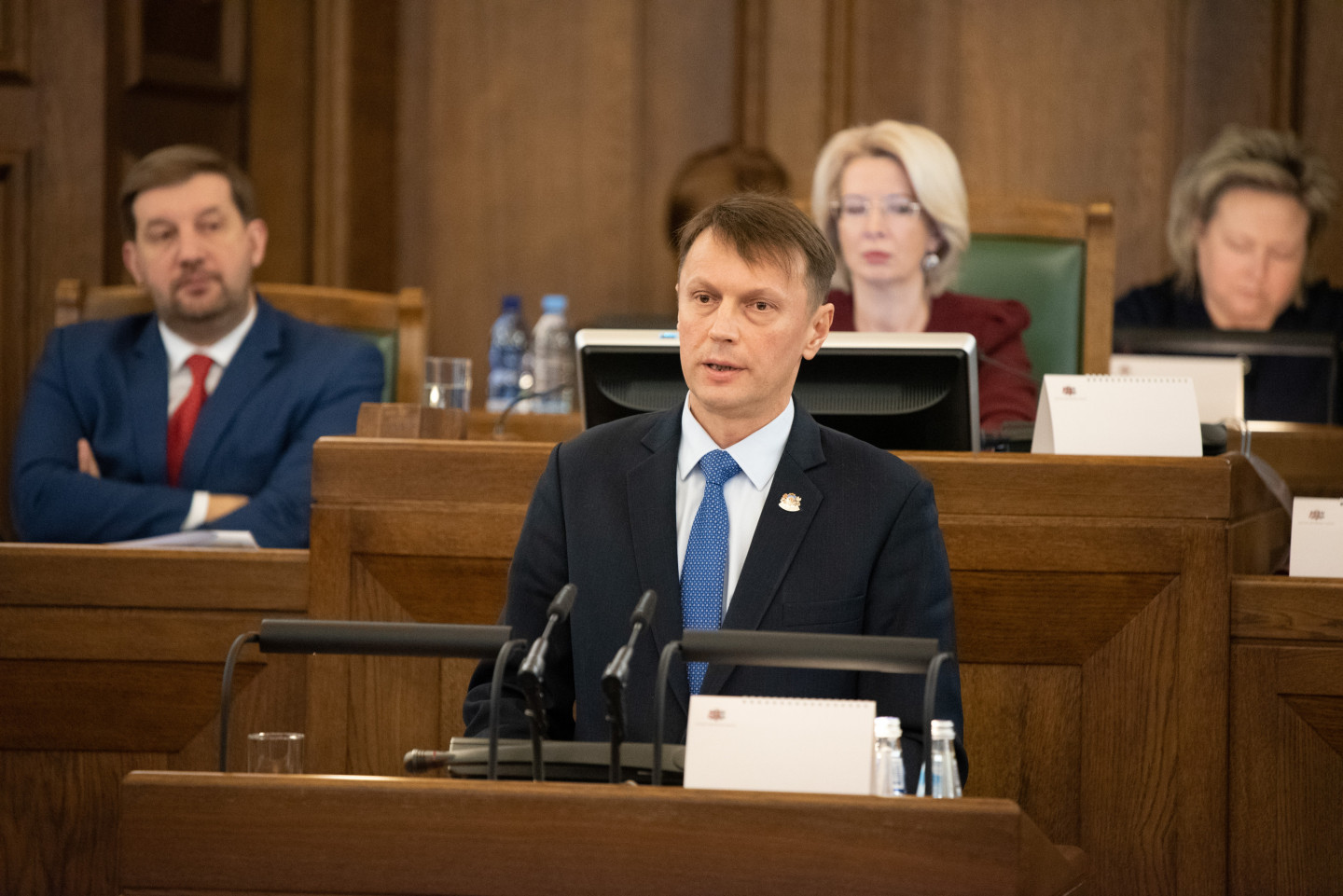 At the beginning of the year, when the rhetoric of senior officials suggested that an increase in the defense budget was being actively planned, but Russia had not yet invaded Ukraine, Valērijs Agešins, representing the opposition Harmony (Saskaņa) party in the Saeima National Security Committee, did not support this idea. He has now changed his opinion, but still believes that concerns about building defense capabilities should not overshadow social security issues.

Yesterday, the Saeima also continued its work to make the traditional Victory Day celebration on May 9 as difficult as possible. Amendments to the law preventing events at Soviet army monuments and memorials had already been adopted, but on Thursday it was also decided that this year May 9 would be "a day of remembrance of the victims and the deceased of the Ukrainian war".

This initiative, submitted by Development/For! (Attīstībai/Par!) and supported by the coalition partners, was not understood by Māris Kučinskis, chairman of the National Security Committee, representing the Union of Greens and Farmers (Zaļo un Zemnieku Savienība). He feels that Ukrainians, who are currently living under the horrors of war, might misunderstand the choice of such a date. The Committee's chairman thinks that it would be useful to choose another date, and to put the commemorative day on the calendar for every year, instead of just once this year.

At the end of January, you expressed the opinion that instead of increasing the defense budget, funds should be allocated for the salaries of doctors, teachers and police officers. Has the war that Russia started in Ukraine changed your position on this issue?

You know, I would like to say two things. The situation in the world at the moment is that the priorities of the national budget will be defense and security. That is absolutely clear. At the same time, we must not forget about other priorities.

If we are going to use these defense funds efficiently and effectively, then we also need to think about reimbursable medicines, about indexing pensions at least twice a year, and about increasing child and parental benefits.

Because, unlike what I said earlier, the situation in the world is such that the priorities will be defense and security, but these funds must be used in a controlled and efficient way, and then we can also talk about benefits and salaries.

The events in Ukraine have also sparked another draft law - to make May 9 this year a day of remembrance for the victims and the deceased in Ukraine. You did not support this bill. Why?

It seems to me and to our fraction that there is already too much pressure on May 9. Let us not forget that May 9 is also Europe Day. It happens that the day on which some people are happy that we are part of the European Union will have a tinge of mourning.

In my opinion, this is not a fully thought-out bill. Moreover, I do not think that we should use the tragedy of the Ukrainian people so cynically to boost our ratings. I am thinking here of the submitters from one particular party.

May 9 is Europe Day, and they have completely forgotten that in the annotation of the bill - nothing is said about it. It only talks about May 9 as Victory Day. So this bill is provocative and not fully thought through.

If the submitters really thought about solidarity, about the victims and the dead, then this commemoration day would be February 24. And that is exactly the proposal that we will be putting forward. It seems to me that this would be logical and understandable.

Are the other restrictions that have been imposed so far on the May 9 celebrations acceptable to you?

I thought about it and I also commented on it in the media: it seems to me - and it is true - that the existing regulation worked. If it works, why change it.

It is well known to all people who, unlike some populist Members of Saeima, are interested in legislation, that an event can be approved or disapproved by the municipality. Moreover, the MPs and the mayor of the municipality have nothing to say on the matter. The Executive Director of the municipality consults the security authorities and, based on their opinion, decides whether or not to authorize the event.

I therefore think that all these additional amendments to the law were not acutely necessary and vital. Because the mechanisms in the existing legislative framework work and have always worked. Or do we not trust the municipalities?