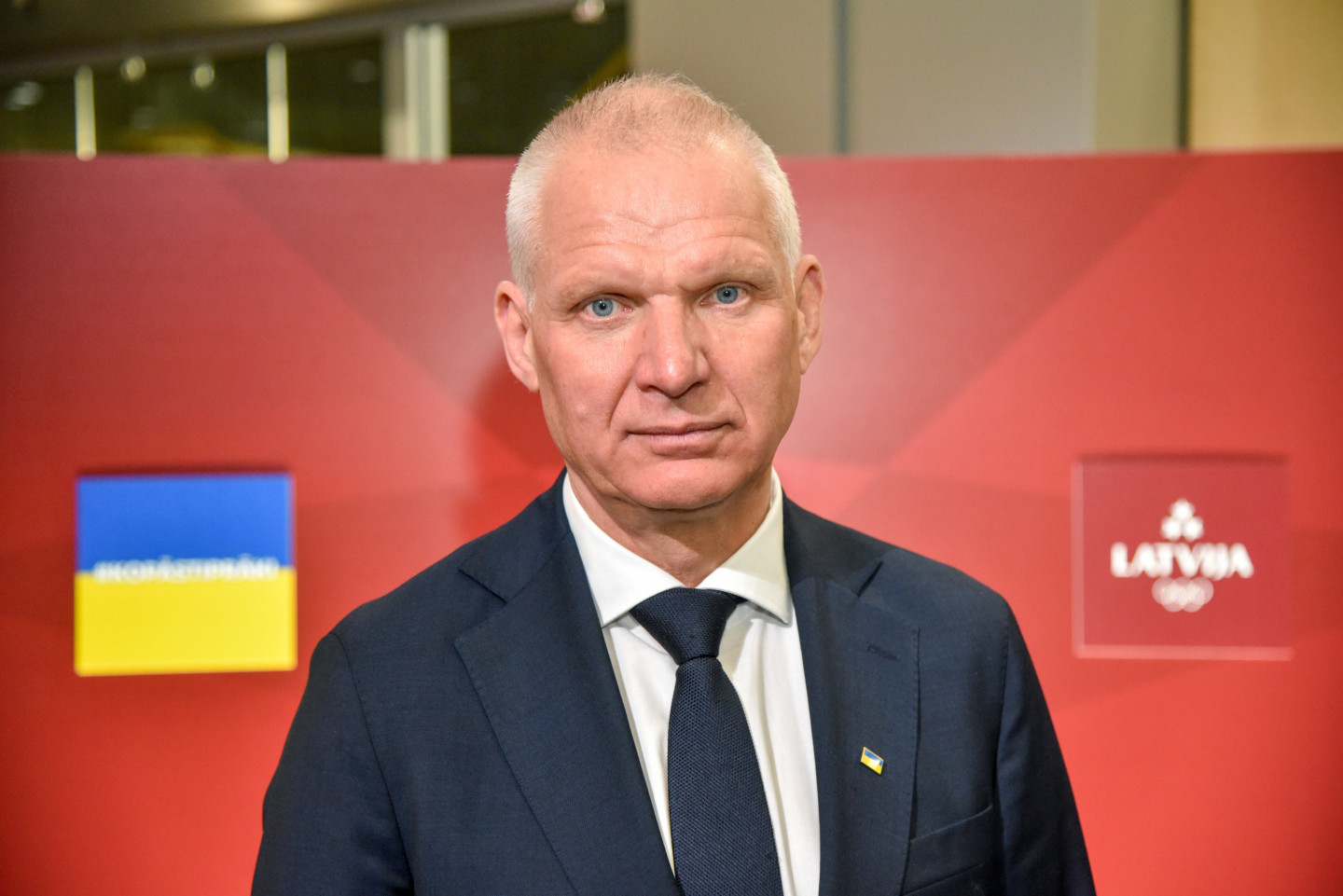 What is happening to the Latvian Olympic Committee's funding?

To understand what is going on, we would have to move forward in time - to May 20. Then there will be a final meeting at the Ministry of Education and Science. About a year ago, the ministry's leadership addressed the leading sports organizations, which in the ministry's view are five: the Latvian Sports Federations Council (LSFC), the Latvian Paralympic Committee (LPC), the Latvian Olympic Committee, the Latvian Team Sports Association (LTSA) and the Council of Latvian Sports School Principals. Last year, the Minister instructed these organizations to come to the negotiating table and develop a common form of governance for the non-governmental sector of sport - to form a single sports organization.

Why should this be done?

Because the MoES believes that there is a need for a single partner in the non-state sports sector. In Estonia, this was established more than 20 years ago by the Ministry slowly doing a risk-benefit analysis, then sitting down at the negotiating table with the sports organizations and reaching an agreement.

The joint organization is still called the Estonian Olympic Committee.

But which one is in the best interest of the Latvian sports sector?

There is no quick and easy answer, because the needs of the sector far exceed the possibilities offered by the state, and the word "reform" in sport makes many people cringe.

Let me remind you of the recent changes in the donation system.

Only an organization called the Olympic Committee can send a national team of athletes to the Olympic Games.

The LOC Board and Executive Committee received and accepted the report prepared by the independent experts Ernst & Young. It was presented to our members - the heads of the Olympic sports federations. At the LOC General Assembly on March 25 this year, there was no discussion due to a lack of interest.

Last year was a busy one, with the postponed Tokyo 2020 Olympic Games and preparations for the next Winter Olympic Games in Beijing 2022. All this happened during Covid.

Three financial support programs were approved by the Ministry of Finance, the Ministry of Education and Science and the government, and invested in high-performance sports to support the training and technical programs of Olympic candidates.

In a context of limited movement of athletes (no training, no competitions, etc.), preparations for the Olympic Games were not interrupted. That is why we are proud of the medals won by Latvian athletes.

The LOC has a number of important and popular social projects, we cooperate with schools, and yet in people's eyes, we are mostly associated with the performance of the athletes at the Olympic Games.

This is understandable. Last year, the organization was audited by the State Audit Office. That also created a certain backdrop.

The audit took place over a year and a half and examined the use of more than €13 million. Irregularities were found in five sports federations, while methodological recommendations were made to the LOC. However, all this also created considerable additional pressure and strain.

We are now monitoring our own organizations - the Latvian Olympic Social Fund (LOSF), which includes sports veterans, the Latvian Olympic Team (LOT), strengthening federations, transferring financial resources to the athletes of the sports federations. We are working on the principle of "one federation, one contract". Last year, we faced the legacy of the past, with a cut of more than €600,000 in funding for the national program "High-Performance Sport". And so last spring we sat in the office and thought: what to do now in this situation and at a time when athletes are preparing for the Olympic Games?

What did you do?

We were self-critical. We carried out a functional audit of the Olympic Committee and the Latvian Olympic Team. We reduced staff and administrative costs, saving more than €150,000 in total.

Not everyone was in favor of this, there was opposition and resentment, which is still voiced today. We identified the untouchable sectors, namely the funding of athletes' training, benefits for athletes, coaches and veterans. This was all in the national budget funding section.

We actively, in a planned and targeted way, approached new partners, because the previous ones were joint stock companies linked to the State, and for various reasons, this cooperation ended.

The result was a success because the Latvian business is responsive. We now have seven reputable organizations as partners. With this support, we are saving a lot of public money.

Who are your partners?

RIMI, 4F, CIRCLE K, ACB, DHL, Swedbank, Radio SWH. In November we had a meeting with the Minister of Education Anita Muižniece, who reminded us about the implementation of the task given by the Ministry of Education and the LOC report. I replied: yes, of course, the independent experts from Ernst & Young are working on it and we will do it thoroughly.

The Latvian Olympic Committee is different from other sports organizations, it has its own strategy - LOC 2030. It has two directions. The first: the Olympic Games and preparations for them. The second: social responsibility, meaning, Latvia needs to have much healthier people, and this health can also be gained through physical activity.

But there is a third aspect: over 30 years, the LOC has become a strong organization with sports infrastructure facilities - Olympic Centers - which are managed jointly with municipalities.

The first Olympic Centre was set up in Ventspils in the early 1990s, after which other municipalities picked up the idea and a system of state-guaranteed loans gradually began to operate. What does this mean? The state issues a guarantee and the LOC, in cooperation with the municipalities, implements the project, after which the state budget provides for the gradual repayment of the liabilities. And so, in 20 years, six major Olympic centers were built - in Riga, Daugavpils, Valmiera, Liepāja, Jelgava and Ventspils.

The State is paying part of the remaining €4.3 million each year according to a repayment schedule, with the last payments due in 2028.

This is clearly not the core mission of the LOC, but it takes a lot of energy, time and attention. The LOC currently has 8 employees and there is a lot to do.

I hope that in the foreseeable future these centers will be fully handed over and managed by the municipalities and the LOC will be able to concentrate on supporting athletes.

This way is much more modern... There would be fewer contracts.

Who suggested this to her?

Sandis Riekstiņš, Parliamentary Secretary of the Ministry of Education and Science, Chairman of the Sport Subcommittee of the Saeima Education, Culture and Science Committee, pointed out the political setting.

What are the options in the end?

We agree that the state budget funds currently allocated by the LOC to the core activities of sports federations should be transferred to the Latvian Sports Federations Council to eliminate the duplication of this function.

A possible option is the partial merger of sports organizations outside the LOC or the implementation of the round table format, creating a sports governance model with separate legal entities: the LOC, the LPC and other sports institutions. This option would be supported for further discussion.

The processes should be carried out in a calm, considered and measured way, creating a so-called road map.

The LOC would have its own vision in its creation and in synchronization with the achievement of the objectives set out in the Latvian Sports Guidelines 2022-2028.

The main rule is to define clear objectives, demonstrate the benefits for the sports sector and convince our members - the federations.

The third option is a complete technical merger of the LOC and the LSFC, dissolving them in the process and creating a new organization. This option should be rejected from the point of view of the autonomy of the LOC and the protection of the rights of its members, the Olympic Federations.

Our study was not the only one: the LSFC also carried out a study from public funds. The LSFC presentation by its President, Einārs Fogelis, included an unexpected proposal - to create a single new sports organization, in the process legally abolishing the Latvian Olympic Committee and the Latvian Sports Federations Council.

Yes, exactly. But this proposal does not stand up to criticism: nobody can abolish the Latvian Olympic Committee. Moreover, the International Olympic Committee closely monitors the observance of the principles of the Olympic Charter at the national level, and any changes, even minor, to the statutes must be agreed with the IOC.

It is clear that indirect pressure is also being exerted, with talk in the background of possible changes in the administration of funding.

We at the LOC want an open and transparent discussion - fair play, looking after our member federations and a streamlined system of support for LOC athletes in the Olympic cycle.

But such nuances are of no interest to anyone at the moment, except the LOC.

I listened to the LSFC presentation and asked: are you really serious about all this? Have you received the opinions of our member sports federations?

I was told: yes, we are serious, everything has been checked, the majority is in favor, we have looked at everything.

The floor was given to the visibly confused representatives of the LPC, the LTSA and the Council of Sports School Principals. They felt that something is wrong here. We went on to discuss other issues:

Despite the unanswered questions, together with LPC, LTSA and our member federations, we are continuing our work, conducting negotiations and preparing a common vision for the future of the sector.

Latvian Foreign Minister: NATO membership of all three of these countries - Turkey, Sweden and Finland - is essential for Latvia's security interests
Jānis Lasmanis
Azov Commander Yaroslav Soloduha in an exclusive interview with Neatkarīgā: Now Azov is the whole of Ukraine
Elita Veidemane
MP Jānis Urbanovičs: I'm not trying to scare anyone, I'm very scared of it myself
Jānis Lasmanis
Citi Zēni go to Eurovision: determined and under no illusions
Sandris Vanzovičs
MP Romāns Naudiņš: For safety reasons, it would be better if the LNG terminal was state-owned
Jānis Lasmanis
MP Kāris Šadurskis: We can do much more with investment from companies from the civilized world than with the state alone
Jānis Lasmanis