Azov Commander Yaroslav Soloduha in an exclusive interview with Neatkarīgā: Now Azov is the whole of Ukraine

"14 years ago I met Latvian bikers in Lviv. I am a biker myself. They invited me to Latvia, to the Latvian Legion Memorial Day. As I have great respect for our Ukrainian Legion - the Galicia Division - I agreed. I took part in the march of the Latvian Legionnaires, I was carrying the Ukrainian flag and I saw the vatniks explode in anger when they saw it," recalls Yaroslav Soloduha, commander of the medical corps of the Azov movement. Movement? - I asked. "Yes. Now Azov is the whole of Ukraine," he adds.
12.05.2022. Elita Veidemane 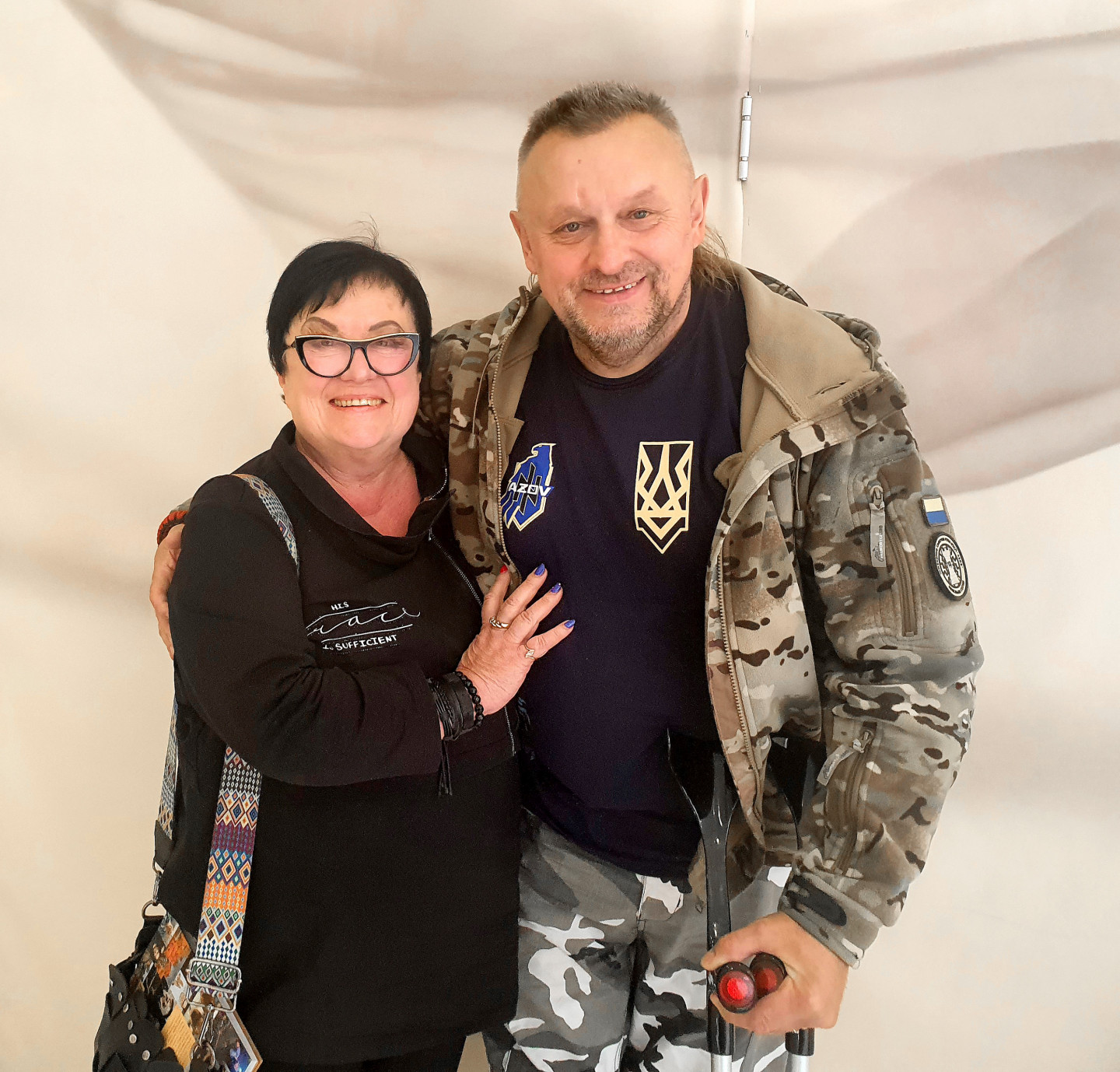 When the war started, Latvian people started helping Ukraine. How did you feel about this help?

First, there were some backpacks and boxes full of various necessities, then there were cars full of them, then they had to be transported by a bus.

Now we have filled several jeeps and two army cars. A lot of people have joined - the National Union "Justice" party (Nacionālā savienība "Taisnīgums") represented by Viktors Birze, bikers, businessmen. I myself am a biker and a nationalist, and also a kind person, so helping is in my blood.

I am grateful to your Ministry of Agriculture, which helped with food donations.

You said you are a biker. What kind of motorcycle do you ride?

I have four motorcycles and the best one is a Harley Davidson Ultra Electra Glide Limited.

Well, then... We have an orphanage with 68 sick children, and this orphanage housed more than 60 refugees at the beginning of the war. Only for three days, and yet. The director of the orphanage said to me that all the food supplies had been eaten, saying that tomorrow there would be nothing to feed the children or the refugees... What to do? We gathered money, bought pasta, canned meat. Polish bikers are also helping. They have big warehouses, where donations from Germany and other countries are taken. Then they load the donations into big trucks and take them to Ukraine.

You said that Azov is the whole of Ukraine.

Yes, it is, because there is no city where there is not a sub-unit of Azov. The best sub-units of the army are the Azov special operations forces, which are subordinate to the Ukrainian General Staff. So, only President Zelensky and the General Staff are above Azov.

Why is this so?

Before the full-scale war, there was the Azov Regiment, i.e. separate special task formations linked to the Ukrainian National Guard. For example, such is the regiment based in Mariupol. It is a combat unit. Over the last eight years - while the war with Russia was going on - around 15,000 soldiers passed through this unit. They became veterans. When the full-scale war started, all former Azov members were called up to fight. And they all came.

Azov are right-wing nationalists. And that says a lot.

You walk with crutches. What happened to your leg?

Inflammation of the hip socket. It developed to the point that I couldn't walk anymore. I've been working a lot lately, every day - injections and pills... But the liver doesn't last forever either. I called my Latvian brothers, told them, and they immediately said: come here, and quickly! If I were a refugee, everything would be fine, but I am a commander, the structure I lead has to function like clockwork, and I am not allowed to leave the country - I am subject to military conscription. However, all the paperwork was done, and I went to a Latvian surgeon who performed the operation on me. For free.

Yes, I am. Plus also procurement for the army and the civilian population. Plus, I also make some interesting things for the war...

What kind of things?

I'm a sapper. For example, I mount a grenade on the barrel of a submachine gun, and then it flies at least 200 meters. For comparison: if a man throws a grenade with his hand, it will fly maybe 30 meters. And I've made a lot of these things since 2012, when I had to sit at home for a few years... I have various awards for that.

What was your motive for inventing these sorts of things?

I was researching how snipers work... I'm a sapper, but what to do with these snipers?! How do we take them out so that they don't kill our soldiers? While I was forced to sit at home, I went through sniper school because I needed to understand how they think. How to get into position, how to calculate wind direction, wind strength and so on.

I learned all that. Since my specialty is improvised explosive devices, I started calculating everything I needed to take out a sniper myself. There was only one thing I needed to know - the direction in which the sniper was. Because the area of the fragments of the F1 grenade I fire covers a radius of 200 meters. Moreover, my grenade explodes in the air, not on the ground. I don't care where the sniper is, even if he is in the trenches, I will kill him anyway. Once I wanted to find the sniper who killed my friend. Unfortunately, I did not find him. Others did. He had fired a shot from about two kilometers away.

Do you ever have a feeling of fear?

I have only a feeling of choice.

When you have to choose which wire to cut, the blue one or the red one. No fear, though. They say that the sappers are wrong...

No. Twice. The first time is when the next sapper chooses his profession. We knew there was going to be a war, and our Azov Corps organized training for civilians: how to notice mines, for example. If you see one, don't go near it and don't touch it. Only a sapper should do that. And for them I make what I call mine cats: special hook mechanisms that pick up a mine and turn it upside down to make sure there is not a grenade hidden underneath. The Russians even put mines on their own dead: for example, a Ukrainian soldier comes up to a dead Russian, starts searching him for documents, turns him on his back, and - boom! Such casualties must not be touched, they must be grabbed by these mine cats and turned around at a safe distance.

Do you know that there are some journalists in Latvia who have called the Azov regiment a neo-Nazi group?

I know. Unfortunately, there is no shortage of vatniks in Latvia too.

We see Ukrainians fighting the Russians heroically, defending their country, but we have a 5th column, and there is nothing we can do...

You can, though. I think that when the war is over, many people will start arguing about who was the more powerful leader. Now they are not arguing because there is a war.

We have an anecdote. A Belarusian, a Russian and a Ukrainian are taken prisoner. They are asked: what is your last wish? The Belarusian says: I want to eat potatoes. The Russian says: give me vodka and herring. The Ukrainian says: take me around the corner and give me a good kick in the behind with your boot. What are you doing?! You're about to be shot, why do you want that?! Okay, fine. They take the Ukrainian around the corner, kick him in the behind, the Ukrainian turns around and beats up the kicker, takes his machine gun, shoots all the guards. The rest of the prisoners are dumbfounded! Why didn't you do this before?! The Ukrainian says: We Ukrainians are like that - until we get kicked, we won't do anything!

So believe me: if there was a war in your country, everyone would unite against the aggressor.

Latvian Foreign Minister: NATO membership of all three of these countries - Turkey, Sweden and Finland - is essential for Latvia's security interests
Jānis Lasmanis
MP Jānis Urbanovičs: I'm not trying to scare anyone, I'm very scared of it myself
Jānis Lasmanis
LOC president Žoržs Tikmers: Nobody can abolish the Latvian Olympic Committee
Elita Veidemane
Citi Zēni go to Eurovision: determined and under no illusions
Sandris Vanzovičs
MP Romāns Naudiņš: For safety reasons, it would be better if the LNG terminal was state-owned
Jānis Lasmanis
MP Kāris Šadurskis: We can do much more with investment from companies from the civilized world than with the state alone
Jānis Lasmanis