Latvian Foreign Minister: NATO membership of all three of these countries - Turkey, Sweden and Finland - is essential for Latvia's security interests

While Ukraine continues to fight the attacking Russian troops, there is also a fight – but a diplomatic one - within NATO. As Sweden and Finland announce that they too want to join the world's most powerful military alliance, their foreign ministers are either trying to convince the partners that these countries will make excellent additions to the ranks of their allies, or are trying to wring some benefits for themselves out of the enlargement process.
26.05.2022. Jānis Lasmanis 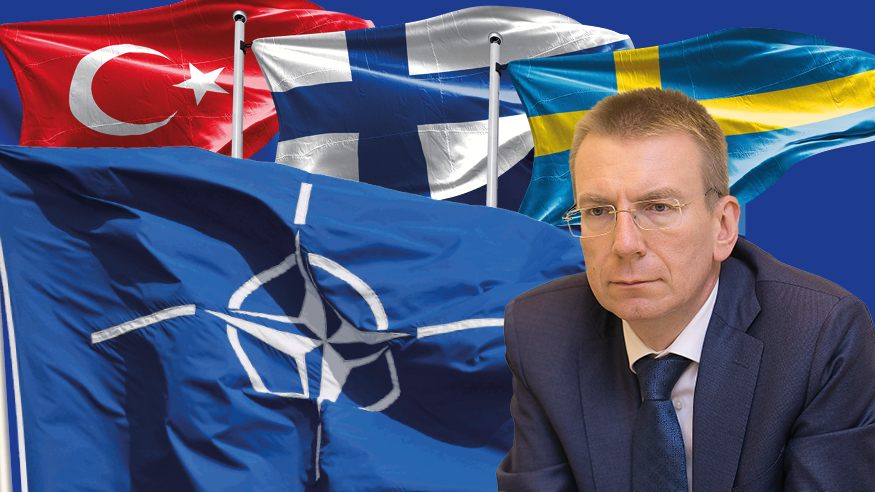 Edgars Rinkēvičs: We are trying to call our wishful thinking the reality. Yes, Russia is suffering losses, but it is still powerful and dangerous, not only for Ukraine, but also for our region and for the whole world ©Ernests Dinka / Saeima

Turkey's position is a major challenge, as it is not yet in favor of NATO enlargement. Since the accession of Finland and Sweden to the Alliance is beneficial for Latvia, our Foreign Minister Edgars Rinkēvičs has also been actively involved in the discussions, as he believes that the accession of new members would strengthen security not only in the Baltic region, but also for the Alliance as a whole.

As for the real war in Ukraine and the Western support for it, the Foreign Minister is convinced that the strategy we have chosen is the right one, but that the West must be united if it is to bring about the victory of Ukraine.

It is known that Turkey is not a fan of Finland and Sweden joining NATO. Why is this country opposed to it, and would NATO be possible without Turkey but with two new members? Such a scenario has been discussed before in the pages of Neatkarīgā.

If we talk about the current situation, there are indeed Finnish and Swedish delegations in Ankara today [Wednesday] discussing issues of concern to Turkey.

I myself had talks with the Finnish and Turkish foreign ministers. I have also had discussions with the Swedish Foreign Minister here in Norway, where the Council of the Baltic Sea States is taking place. I would say that it would not be wise to dramatize the situation; there are issues that are important for Turkey, both arms export controls and countries that restrict trade with Turkey. There are also issues concerning terrorist organizations. There are those that are important for Turkey's security, and there are discussions about which particular organizations should be considered as such.

Ukraine's predictions that the fighting will become even more violent in the next three months suggest that an end to the war is not foreseeable in the near future. As the war drags on, could the idea that the Russian President should be given a chance to save face become popular in the European Union beyond Italy, France and Spain?

I would say that there are many ideas at the moment about how to end this war that Russia itself has started, but there have been such ideas for some time. Perhaps the first element to take into account is that, although many people realized that a Russian invasion was inevitable, no one fully believed that Ukraine would resist for so long and so successfully, and even be able to recapture a significant part of the territory that Russia had conquered.

The second thing is that this war is also a test of Western unity. We are already seeing how difficult the discussions on the European Union's sixth package of sanctions, which also includes Russian oil and the arming of Ukraine, are for us.

Third: while the hostilities are going on, there are, of course, various diplomatic efforts between Ukraine and Russia, and between the major powers and Russia and Ukraine, to bring this conflict to an end as quickly as possible.

But I repeat: Ukraine did not start this war; Ukraine is fighting not only for the integrity of its territory, but also for its survival and existence. Putting any kind of pressure on Ukraine is morally unacceptable because then Russia will not stop, it will take a breather, and after a while, everything will start again.

Perhaps even a well-intentioned effort is unlikely to bring lasting, stable peace to Ukraine. It is more likely to be a ceasefire for which we will all pay more in the end.

What should the Western world do to ensure Ukraine's victory as quickly as possible?

Our strategy is the right one: to support Ukraine with arms, economically, to sanction Russia and to strengthen NATO's presence on this flank.

This strategy is effective, it is working, but warfare does not end in a matter of weeks or months. Only when Russia realizes that it has nothing to gain will it be ready to negotiate.

I do not believe that it would be right to put pressure on Ukraine in order to allow the Kremlin to save face. Believe me, the Kremlin will save its face when it realizes that the West is united and will not be tempted. It is up to us and like-minded countries to maintain this position and to convince our allies of the need for strategic resilience.

We have said this from the first day of the war. I understand that, if we do not get results in the first few months, there is a renewed desire to talk to Russia nicely, as there was in 2014 and 2015. However, what we have seen so far shows that the approach of that time was wrong. We need to have the strategic stamina and patience to continue what we have started.

Just bear in mind that the Russian forces are large. I say to my colleagues that we are trying to call our wishful thinking the reality. Yes, Russia is suffering losses, but it is still powerful and dangerous, not only for Ukraine, but also for our region and for the whole world.

CEO of Ghetto Games Raimonds Elbakjans: Do not fool young people and prepare them for an easy life, because it will not be like that!
DSDaiga Stokenberga
MoD Artis Pabriks: It's in Russian interests to lose the war against Ukraine
Elita Veidemane
Chinese Ambassador Liang Jianquan talks about China's assessment of Russia's invasion of Ukraine and global security challenges
JPJuris Paiders
LRA President Jānis Jenzis: Tourism and restaurants are the first things people start saving money on. We won't have an easy autumn
MKMāris Krautmanis
Singer Marija Naumova: May peace be in our hearts
Santa Raita
University of Latvia Rector Indriķis Muižnieks: I'm bothering someone. But not the university
Elita Veidemane