Aivars Lembergs: The property seizure protocol has been falsified!

At the court hearing on November 25 of this year, Aivars Lembergs submitted a request, setting out his opinion on the recent facts related to the seized property – after the court removed former Swiss lawyer Rudolfs Meroni as the "custodian of the seized property", obliging him to transfer this property to the Provision State Agency.
18.12.2020. Uldis Dreiblats, Ritums Rozenbergs 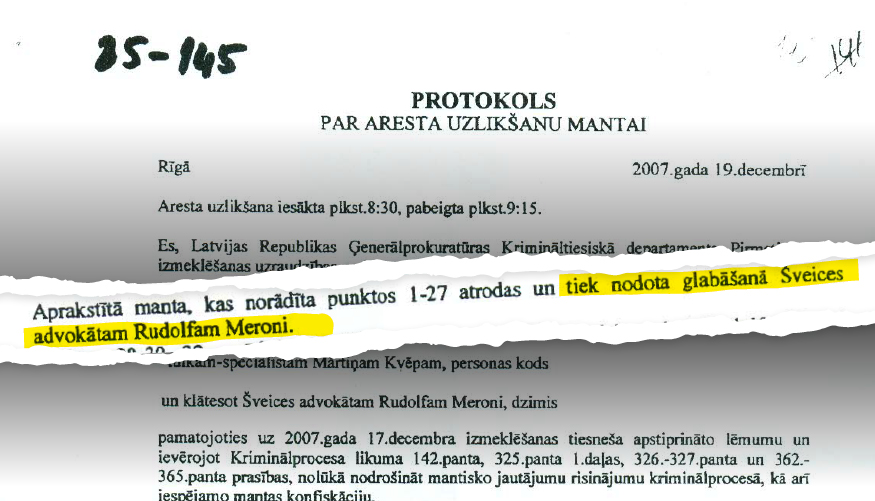 The newly discovered facts have been confirmed in their letters both by R. Meroni himself and, in fact, by the Prosecutor General of the General Prosecutor's Office Aivis Zalužinskis; they are expressed in the legal analyzes performed by the Provision State Agency and its manager - the Ministry of the Interior - that it is not possible to enforce a court decision on the takeover of the property.

It should be reminded that in December 2007, upon receiving this “property” seized in the criminal proceedings of Aivars Lembergs, R. Meroni claimed to the Latvian media that its value was more than 100 million, maybe even 300 million US dollars.

In the request, A. Lembergs indicated that when writing a judgment, the court will also have to resolve property issues, as required by the Criminal Procedure Law. But, “this will be impossible because the criminal case file contains a procedurally invalid decision of 17 December 2007 on the seizure of property, as well as procedurally invalid protocols of 19 December and 21 December 2007 on the seizure of property because the seizure was shares of foreign companies and "the rights of the real beneficiary", which were not within the jurisdiction of the Republic of Latvia, but requests for legal assistance for the execution of seizure of property were never sent abroad, which significantly violated procedural law."

Although the seizure records state that the seized property "will be deposited with the Swiss lawyer Rudolfs Meroni", now both R. Meroni and the prosecutor A. Zalužinskis have confirmed that it is untrue. "No property was physically handed over to R. Meroni, prosecutors were not even convinced that such property existed at all, because it had never been examined procedurally," A. Lembergs emphasized.

Do the stock originals even exist? 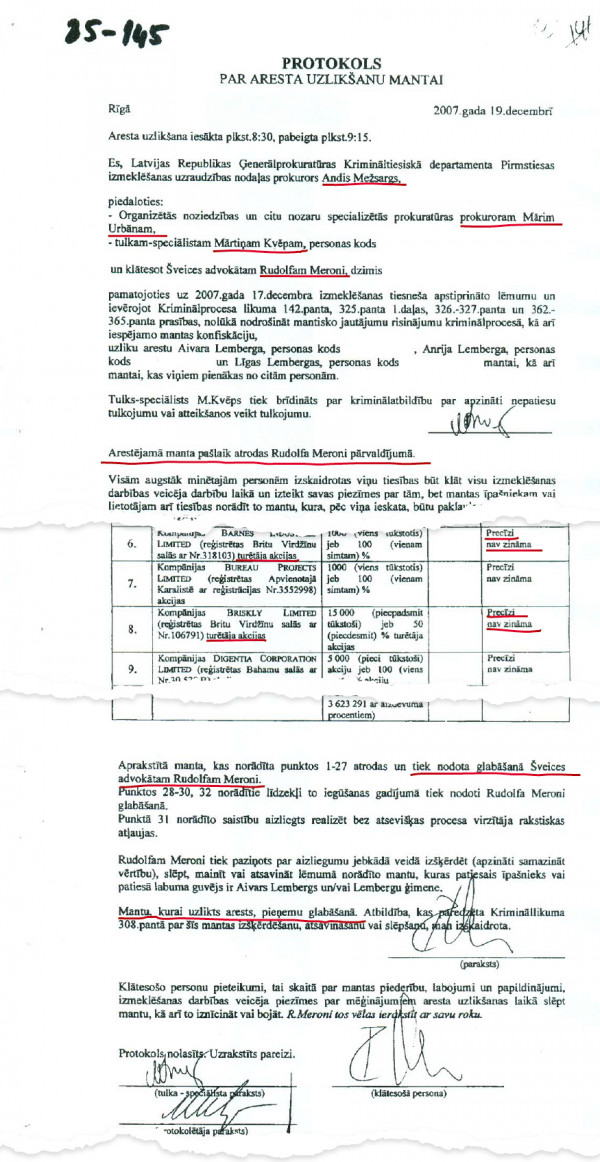 VISIBLY FALSIFIED. The protocol of 19 December 2007 on the seizure of property is procedurally invalid and falsified, as it states that actions that have not taken place and have not been documented have taken place. For example, prosecutors have not been convinced that such "property" exists at all, because they have never seen this "property" at all until now. The protocol is falsified because it contains untrue information that the property is "transferred", even though nothing was physically transferred. Prosecutors have entered the “property” in the protocol, which was not located in the territory of the Republic of Latvia at the time of arrest. By deliberately failing to send relevant requests for legal aid for the execution of the arrest abroad, "prosecutors supported R. Meroni's illegal activities with property, which was never subject to the jurisdiction of the Republic of Latvia, which led to wasting the property of the seized assets on a particularly large scale."

"It is clear from R. Meroni's letters of 22 September and 2 November 2020 that no property was physically handed over to him, no property is currently with him, but all the paper shares are already in the file." In his letters, R. Meroni stated: "All the above assets are located outside the territory and jurisdiction of the Republic of Latvia and are located in the companies specified in the decision, and not personally with the person undersigned (so R. Meroni calls himself in these letters). Nothing was physically handed over to the undersigned. The undersigned considers that the paper shares are in the case file of the Riga Regional Court.”

Given that the seized "paper" shares were not originally in the file, A. Lembergs logically concluded: "It is apparent from that letter that R. Meroni had only photocopies of the shares and share certificates currently in the file (he first sent them to Prosecutor J. Juriss on 1 July 2008 (Vol. 84, pp. 165-169). He has no other paper shares.

This statement of R. Meroni has very serious legal consequences because it seems as if the custodian of the seized property claims that 1) prosecutors A. Mežsargs and I. Paegle, when drawing up the decision on seizure of property, as well as protocols on the seizure of property, have never seen the shares that have been arrested; 2) these shares are not at his disposal. It follows that these shares do not exist, as the shares are considered to be the original shares and not some photocopies."

Have prosecutors ever seen the "property"?

"I would like to draw the court's attention to the fact that when prosecuting the shares, the prosecutors did not see photocopies of the shares either, as they were sent to them only 6 months after the arrest. Thus, they have been raised in the pre-trial investigation of Aivars Lembergs' case without even seeing the shares, thus not making sure of the existence of the shares. Not to mention that the prosecutors have not checked that these shares belong to Aivars Lembergs."

"In fact, prosecutors have never seen the shares listed in the seizure report; these shares were never procedurally seized and examined and thus do not exist procedurally. By handing over (but not actually handing over, only by entering false information in the protocol) the non-procedurally secure and therefore non-existent property to R. Meroni, the protocol of 19 December 2007 on the seizure of the property was falsified (Volume 85, pp. 145-148)," A. Lembergs concluded in court.

Everything is based on Meroni's words

The aforementioned 2007 seizure report states that "the seized property is currently under the control of Rudolfs Meroni." This follows from the fact that the shares and the "beneficial owner's rights," which were seized in December 2007, were located in "R. Meroni management both individually and as an official of Moore Consulting S.A., Eurocom International Ltd. and of the other companies he represents."

However, there is no document in the criminal file that R. Meroni has the authority to represent those companies. All the conclusions are based solely on R. Meroni's words.

Moreover, "prosecutors based all of Aivars Lembergs' accusations on R. Meroni's unverified testimony, which was not confirmed by admissible evidence - the original shares," A. Lembergs emphasized.

Who has the right to take over the property?

"Only the one conducting the proceedings, which is the composition of the court at this stage of the criminal proceedings, has the right to impose procedural obligations on both the previous custodian, Rudolfs Meroni, to return the seized property transferred to him and to check that the property previously transferred has been returned undamaged, unspent and precisely as it was given. As well as

only the one conducting the proceedings - the composition of the court - has the right and obligation to transfer the property specified in the court decision to the next custodian appointed by the court - the Provision State Agency,

indicating in the protocol the individual features of each unit of property, the value of shares, as well as informing the custodian of the obligation and responsibility regarding the preservation of the property transferred for storage. The Criminal Procedure Law does not allow the court to transfer its powers to other persons, including the Provision State Agency, in order to impose a procedural obligation on Rudolfs Meroni,” said A. Lembergs, reminding that the Provision State Agency in its letter to the court "stated so, considering that it is not possible to enforce the judgment of the court of 17 August 2020 (Volume 281, pp. 48-52)."

In the light of this argument, A. Lembergs asked the court to order R. Meroni to transfer the property directly to the court, and to do so by a certain time, and not as it is now, when no time limits have been set for the execution of the court decision.

What have prosecutors achieved with the 2007 protocol?

A. Lembergs also concluded the consequences of drawing up a falsified report on the seizure of property: "It can be concluded that prosecutors deliberately gave away the seized property (in fact, did not give anything, but only indicated false information in the protocol), which they never saw, checked and examined in accordance with the Criminal Procedure Law, to unknown companies with unknown capacity, which led to a waste of the seized property.

There is reason to believe that

it was the prosecutors who, with their decision to seize the property, established a formal relationship (trust) between R. Meroni and the 26 companies listed in the property arrest warrant, which gave R. Meroni a legal opportunity to treat the seized property as his own with no supervision and is currently mocking the court and the state institutions, as we see from R. Meroni's correspondence with the Court and the Provision State Agency."

What will the Attorney General say?

A. Lembergs also reminded the court that in 2014 R. Meroni changed the legal status of the "holder" or "bearer" shares of six companies registered in the British Virgin Islands (BVI) and even the owner of those shares, which he was, of course, prohibited from doing. It is logical that the Provision State Agency cannot now even take over the “bearer” shares mentioned in the attachment protocol, because they no longer exist at all.

"The fact that all the seized shares of BVI companies no longer exist - in their place, there is a completely different share owned by a completely different owner, is another evidence for the obvious waste of the seized property, which is known to the court, as in his statement to the court on 15 December 2015 Rudolfs Meroni provided essential information in connection with the seized property, which relates directly to that property which the court has decided to deposit for safekeeping with the Provision State Agency by a decision of 17 August 2020.” "In a statement to the court dated 15 December 2015, Rudolfs Meroni points out that in these /six registered companies in the British Virgin Islands/ there have been released other (including other type and belonging to another person) “registered” shares with the shareholder company Eurocom International Ltd. (Volume 217, pp. 167-175). The defense considers that by such actions the prosecutors committed an official crime, about which the Prosecutor General of the Republic of Latvia will be informed,” said A. Lembergs.

He asked the court to request from the removed custodian the originals of the share certificates of the six BVI companies mentioned.

Court: the request is not admissible

The court heard out the request without interrupting the speaker. However, in the end, Judge Irīna Jansone stated that the parties' "views on this request could not be admissible and the request could not be decided for the following reasons. Your request exceeds the amount specified in Section 504, Paragraph three of the Criminal Procedure Law, which the court may decide upon completion of the court investigation, as Section 504, Paragraph three of the Criminal Procedure Law provides for the court to decide on the custody of seized property or material evidence, which the court had also done and had changed the custodian. Your request, in turn, contains the facts that you are disputing, in fact, the existence of this property. You challenge all of these documents that refer to this property. Therefore, the panel also considers that this request is not applicable at all at this stage of the proceedings and cannot be decided. And we will not decide or ask for opinions on this request either. All these facts are to be evaluated in the final decision."