Sabīne Bērziņa and Annija Petrova's material "Are there more deaths from suicide than from Covid-19?" published on the portal TVNET on December 18, 2020 and directed against Neatkarīgā is designed unprofessionally, incompetently, without checking the facts and by manipulating information. Unfortunately, after the publication of this material, Neatkarīgā's options to disseminate the opinion of former Prime Minister Vilis Krištopans on Facebook have been restricted.
22.12.2020. NNeatkarīgā 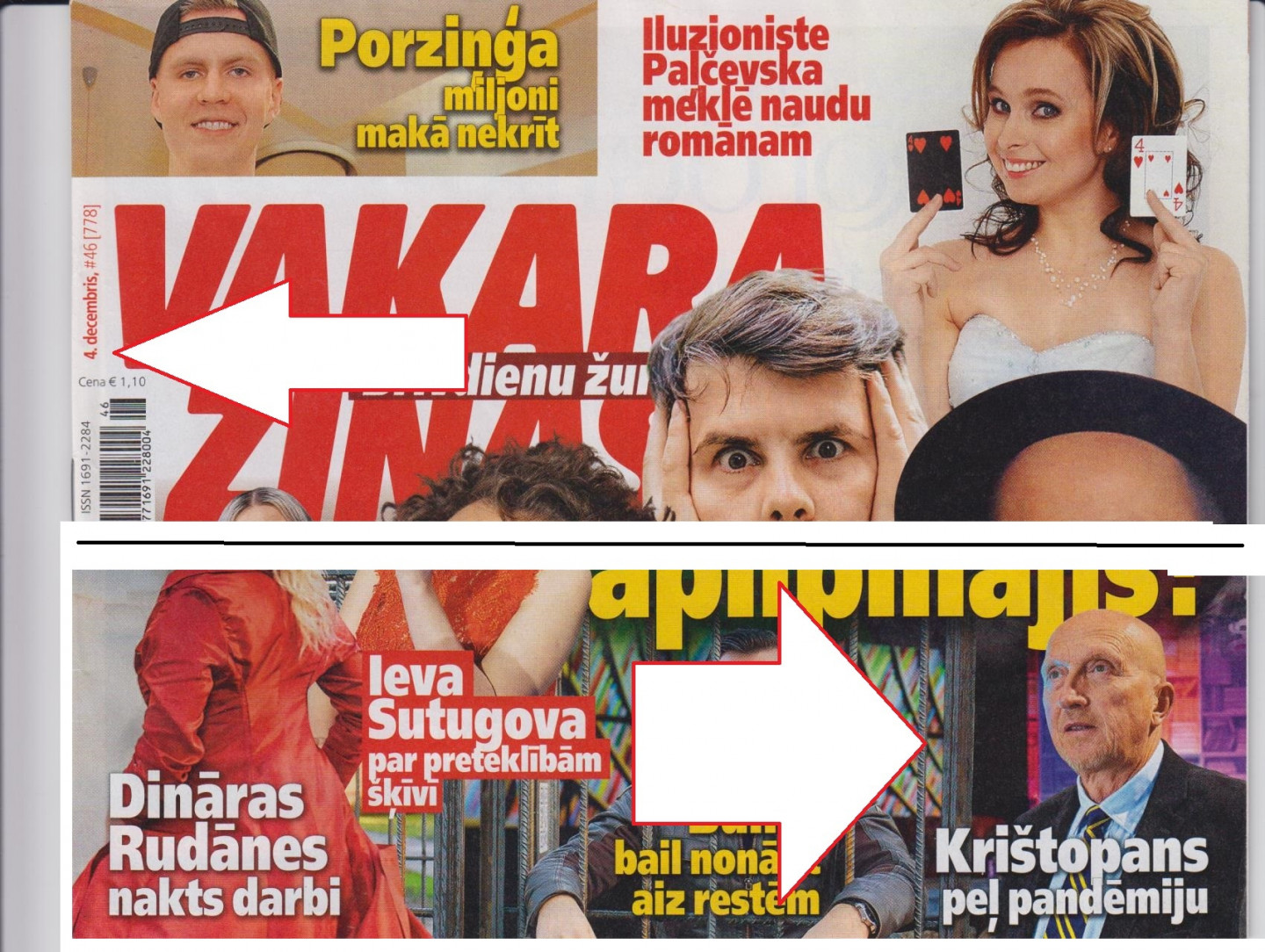 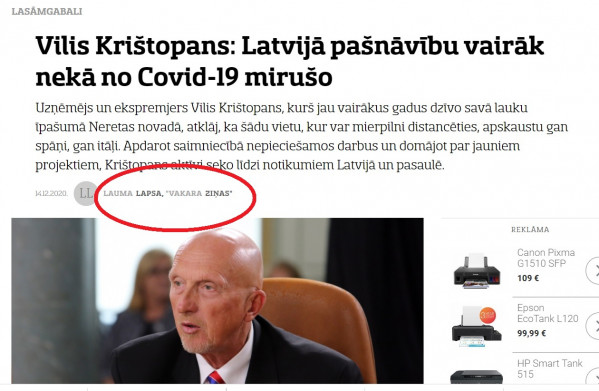 Taking into account the specifics of the magazine's production and publication, the layout of the December 4 magazine Vakara Ziņas had to be handed over to the printing house on December 2. Consequently, the materials of the December 4 edition of Vakara Ziņas, as well as the interview with Vilis Krištopans, were prepared at the end of November.

On December 18, 2020, Sabīne Bērziņa and Annija Petrova published a material on TVNET entitled "Are there more deaths from suicide than from Covid-19?" Re:Check. It contains the following sentence: “In an article published on the portal NRA, the former Prime Minister Vilis Krištopans states that the restrictions of Covid-19 in Latvia and in the world are exaggerated. As one of the arguments, he mentions suicides - there are more of them in Latvia than deaths from Covid-19. We concluded that Krištopans was manipulating the data."

Here's Re:Baltica's conclusion: “Former Prime Minister Vilis Krištopans claims that there have been more suicides this year than Covid-19 deaths. Although the article was published in December, he used data on the causes of death until October and ignored the fact that it is known that in November and December the mortality rate from Covid-19 increased significantly." 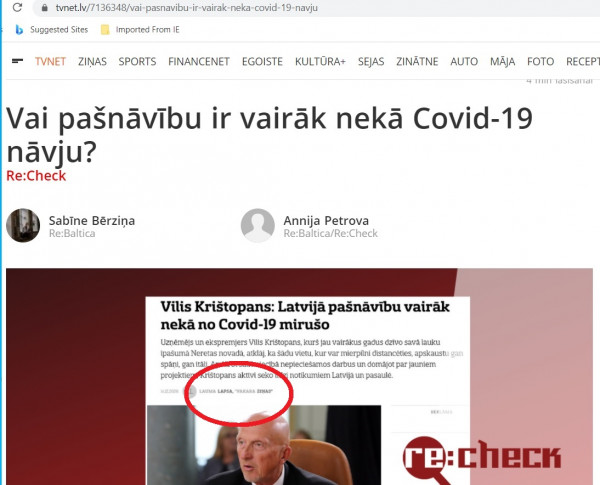 Although a screenshot was used to illustrate the article (see image), showing the exact source (Fig. 3), Sabīne Bērziņa and Annija Petrova did not check the date of the pre-publication of the material. As the CSB data on total (but not detailed) mortality in November were published only on December 11, 2020 at 13:00 Riga time (available here), then on the date of the magazine's publication on December 4, neither Vilis Krištopans nor the journalist Lauma Lapsa, who was preparing the publication in question, could have known them. This means that only the aggregated statistics for October could be available at the time of writing. Neatkarīgā, on the other hand, only republished the material of the magazine Vakara Ziņas, clearly indicating the exact source. 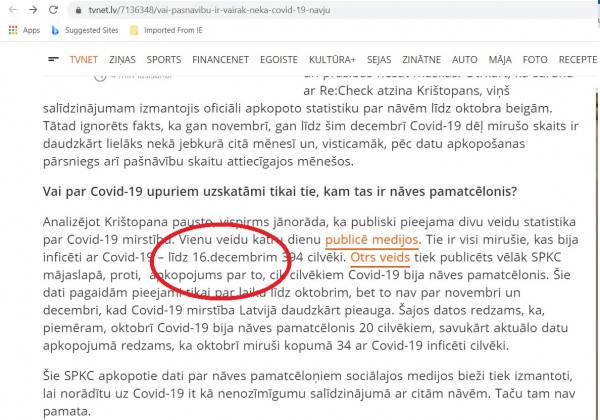 Sabīne Bērziņa and Annija Petrova, on the other hand, base their conclusions on the statistics of December 16 (Fig. 4).

At the time of Vilis Krištopans' interview (end of November) and at the time of the article's publication on December 4, Krištopans' statement that "so far there have been more suicides than deaths from Covid-19" is true. This is based on the statistics available at that time.

Re:Baltica mentions that by the end of October, 257 suicides had been committed in Latvia this year (Fig. 5), while the official information of the SPKC on the website covid19.gov.lv shows that by November 1, 74 people had died in Latvia with Covid-19. (Fig. 6). In turn, for 38 people in Latvia Covid-19 has been registered as the cause of death in the SPKC Health Statistics database by the end of October (Fig. 7). Data can be seen here.

In addition, the Re:Baltica article contains a table (Fig. 8) 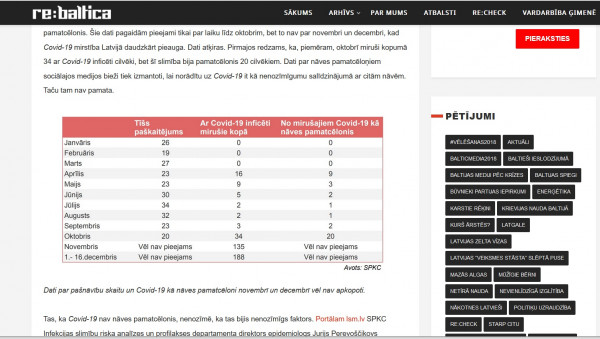 which proves the truth of V. Krištopans, even taking into account the accusation that the whole year is considered, not from the beginning of the epidemic, and that November is not included (which could not be done at the end of November when V. Krištopans was interviewed).

Here is the information gathered using the data published by Re:Baltica on December 17:

Consequently, it must be concluded that Sabīne Bērziņa and Annija Petrova have violated the most important basic principle of honest and ethical journalism - to scrutinize information, and they base their conclusions on unverified information.

The article in Re:Baltica begins with the sentence "Most likely not true..." (Fig. 9), which shows that the fact-checkers are not 100% convinced that what Krištopans said is not true. However, this did not prevent them from informing Facebook that the article with Krištopans was not true, as a result of which Facebook classified it as fake news - so it is not shown to Facebook users.

It is important to emphasize that both Re:Baltica and the digital newspaper Neatkarīgā operate in the field of investigative journalism and compete for a larger number of readers in both Latvian and English. It is known that on March 25 Re:Check became the official Facebook third-party fact-checking partner. Immediately after the publication of the material by Sabīne Bērziņa and Annija Petrova, Neatkarīgā received a warning from Facebook (Fig. 10) that the content viewing possibilities for the followers of Neatkarīgā on Facebook have been restricted.

Such a publication of Re:Baltica creates grounds for concluding that those who in Latvia have undertaken the verification of the facts of third parties in the interests of Facebook do not verify the facts themselves. In addition, we have reasonable grounds to suspect that Re:Baltica-related entities use their influence over Facebook's decisions to undermine and damage their direct competitors.