Covid pandemic is wiping out Latvians

Birth and mortality data for the last two months of last year and thus also for the whole of 2020 confirm that Latvians will die out not due to an increase in mortality, but due to a decrease in birth rates.
21.01.2021. Arnis Kluinis 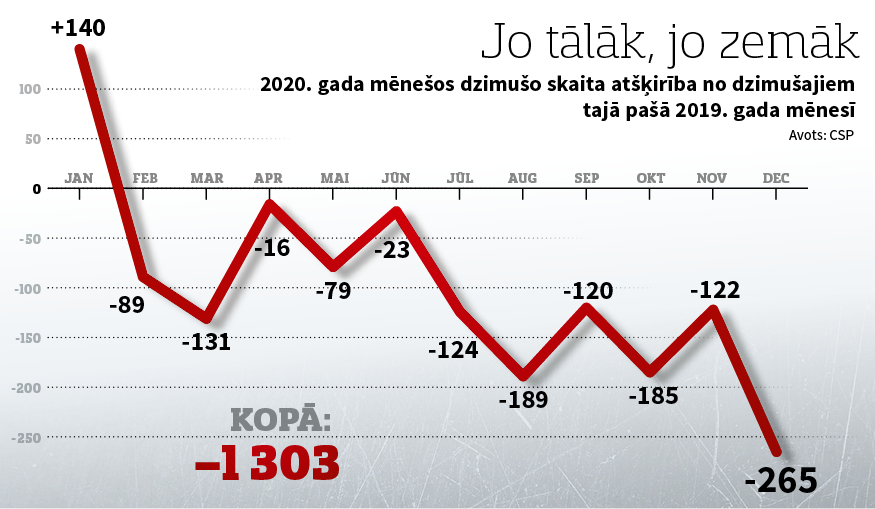 According to the preliminary data of the Central Statistical Bureau, the number of 17,483 newborns registered in Latvia in 2020 is by 1,303 children or 6.9% less than in 2019. On the other hand, the number of 28,656 deaths does not fully justify the official statements about the disease, which has been raging in Latvia for almost the whole of 2020. Yes, the number of deaths turned out to be 937 people or 3.4% more than a year ago. The relatively modest percentage change in the number of deaths can also be partly explained by the fact that the total number of deaths is higher and therefore each percentage is quantitatively more important, but the increase in deaths lags behind the decrease in births even in absolute numbers.

The overall slight increase in deaths is not an argument against Covid-19 at all. The 3,178 deaths registered in December exceed the number of deaths in December 2019 by 673 people or 26.9%. The decrease in the birth rate in December 2020 compared to December 2019 is only 265 children or 17.2%. There is also the question of how many children will be born in Latvia in nine months - how many potential parents at the turn of the year decided to become real parents in the current circumstances. Differences in birth and death rates are largely determined by the time lag between conception and birth in one case and illness and death in the other.

Nature has set nine months for the fetus to grow. Thus, only in the last months of 2020, and most clearly in December, the birth rate decrease shows people's reaction to the state of emergency set by the government of Krišjānis Kariņš and the measures taken within it since the first months of last year. It took people time to evaluate these measures with their decision to have children. The number of such people in Latvia has been decreasing month by month ever since 2016, but the birth rate in December 2020 confirms the refusal of potential parents of about 100 children to become parents, which they would have become without Covid-19.

The effect of Covid-19 on mortality is more rapid but less pronounced. The direct link between morbidity and mortality should be within one month from illness until health (a condition that should always be determined with reservations) or death. It may take much longer for the factors that lead to death from other diseases, from which they were not treated in time to the level maintained in Latvia until the diversion of large medical resources to Covid-19 at the expense of other diseases or patients, to manifest themselves.

Preliminary demographic indicators for 2020 were published by the CSB under the heading “The lowest number of births in December in the last century”. Namely, 1,273 newborns were registered in December.

Indeed, this is noticeable in the country where the number of births per month in the last decades has been between 1,500 and 1,600 children. However, that is why it is easy to notice the previous abnormality - 1,263 newborns in November 1997. In the past, the number of births has not been below the 1,400 threshold for several months in a row, with a clear tendency to fall below the 1,300 threshold and even below.

The CSB starts birth data with 2,554 newborns in Latvia in January 1920. The institution does not take responsibility for what happened in the current territory of Latvia before its official determination, but it would be logical to consider the birth of about 1,200 children a month is not a record of a hundred years, but several hundred years. Namely, already around 1820 more children should have been born here (another thing is how many of those born actually survived) in order for Latvians to become a numerically and socially significant force to secure the Republic of Latvia.