Neatkarīgā has obtained from undisclosed sources an application to Prosecutor General Juris Stukāns, signed by an important witness in the so-called Rimšēvičs/Martinsons case: with this application, the witness renounces his previous testimony against the then Governor of the Bank of Latvia Ilmārs Rimšēvičs.
27.01.2021. Uldis Dreiblats, Ritums Rozenbergs 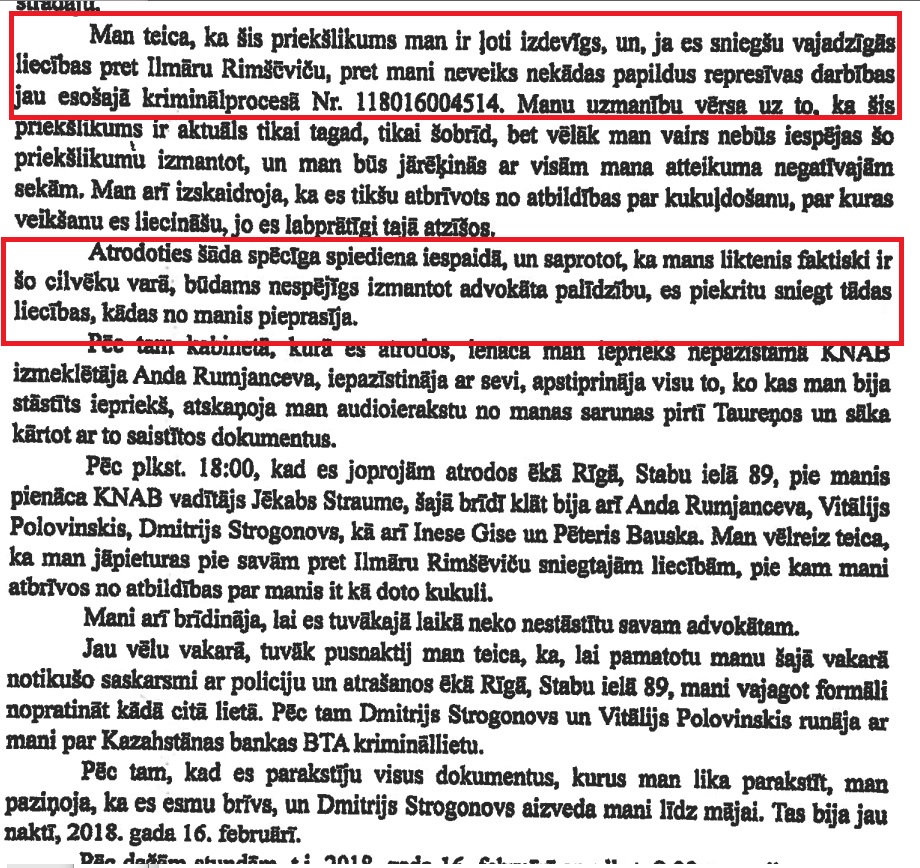 This witness is Viktors Ziemelis, a former member of the Board of Trasta Komercbanka. He also asks the Prosecutor General to evaluate the actions of high-ranking officials of Latvian law enforcement agencies, forcing him to give the above-mentioned testimonies with threats and methods of psychological manipulation.

Neatkarīgā has no reason to doubt the authenticity of this document (it is also accompanied by a letter from V. Ziemelis' lawyer), therefore, taking into account the special public significance of the case, we are publishing the application in full. It dates from 15 December last year, so it was drawn up only two months ago.

The application describes in quite a detail the methods by which V. Ziemelis' testimony was obtained. Of particular interest are V. Ziemelis' new written testimonies that previous testimonies have been forced out of him by the employees of the Economic Crime Department of the State Police in close and coordinated co-operation with KNAB investigators. Until now, publicly available information has allowed us to work out only that these and other investigative institutions compete with each other, but if they “cooperate”, they make shove onto each other applications (read - responsibility) for performing some criminal procedural actions.

The legendary recordings of the Taureņi sauna conversations were also played to witness V. Ziemelis, which are probably also important evidence in the Rimšēvičs/Martinsons case, but which for many years laid there without progress with the blessing of KNAB's operational commander Juris Jurašs.

Previously, the name of V. Ziemelis in connection with testimony in the Rimšēvičs/Martinsons case had not been uttered. However, two days ago, one of I. Rimšēvičs' lawyers, Mārtiņš Kvēps, announced on Twitter that he had informed the Court of Justice of the European Union (CJEU) "of a letter from the main witness of the accusation, Ziemelis, in which he wrote that he was forced to confess to a crime which he did not commit and explained in detail the circumstances of the coercion to give false testimony”.

Neatkarīgā's readers can now get acquainted with the above-mentioned application of V. Ziemelis.

The database Firmas.lv shows that V. Ziemelis has been a member of the Board of Trasta Komercbanka from April 2003 until its collapse in March 2016. Prior to that, he was the Vice President of Saules Banka and also worked in other financial institutions.

About the so-called Rimšēvičs/Martinsons case, the only publicly known information is that I. Rimšēvičs is accused of taking a large bribe from the shareholders of Trasta Komercbanka. Businessman Māris Martinsons has been accused of mediating in this bribery. Both are also accused of money laundering.

It has also been said that the accusation is based on the testimonies of two former managers of Trasta Komercbanka. Now the credibility of one testimony has been significantly shaken.