Interrupted several times; forced to explain himself without the assistance of a lawyer as to why his speech is fully relevant to the case and therefore there is no reason to discontinue it; in his last word, businessman Anrijs Lembergs analyzed in detail the cooperation of the now-former custodian of the seized property Rudolfs Meroni with the prosecutor Juris Juriss, as well as the aims and consequences of this cooperation.
06.02.2021. Uldis Dreiblats, Ritums Rozenbergs 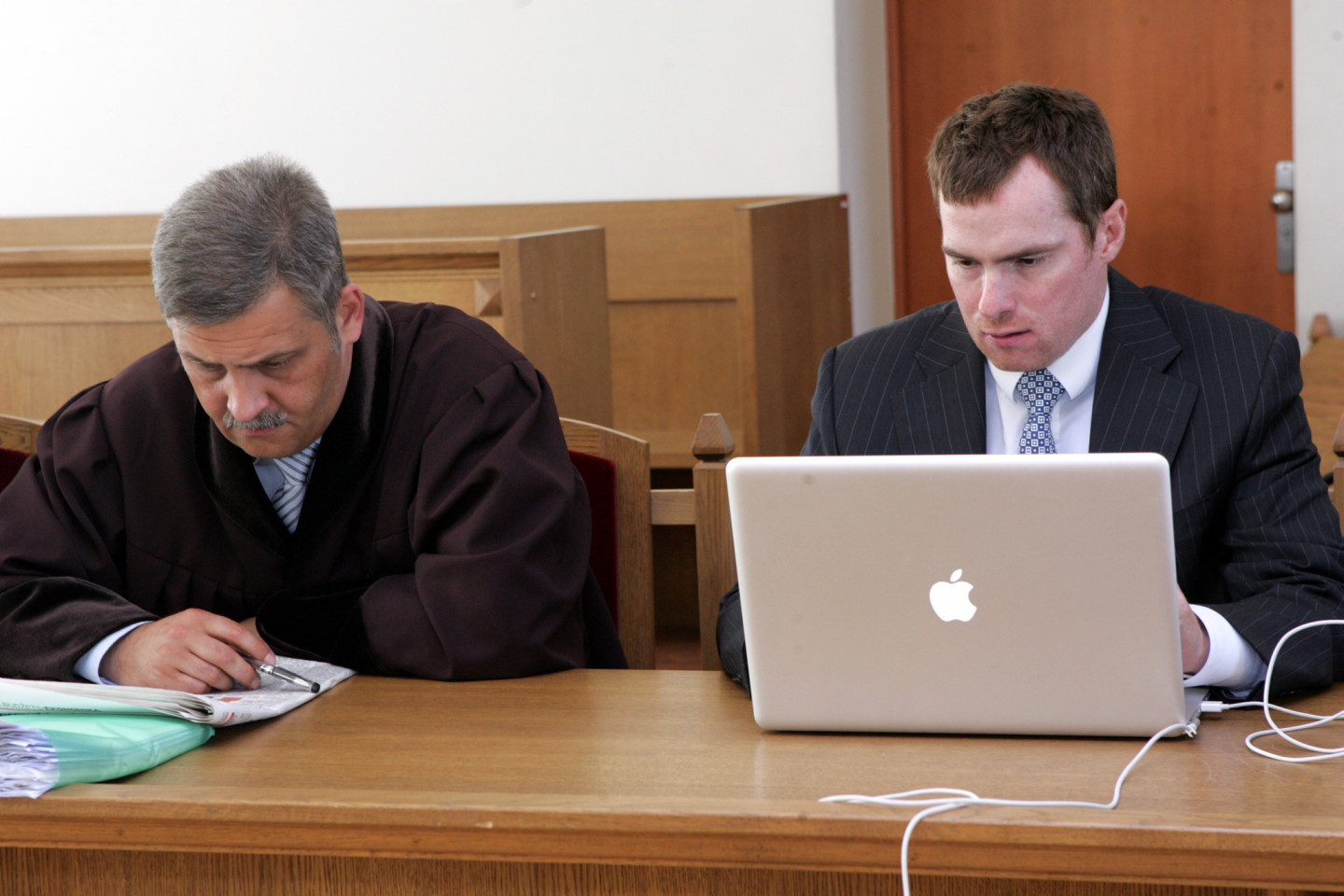 ANRIJS LEMBERGS (pictured right) was interrupted by both the prosecutor and the court during the last word. His lawyer, Oskars Rode (pictured left), was barred by the court from defending Anrijs Lembergs. However, the businessman was able to finish his last word, emphasizing that it is his duty to point out in court the possible criminal conduct of public officials. ©Raitis PLAUKS/F64 Photo Agency

He informed the court that what had been said in the last word would also be drawn up as a separate application to the Prosecutor General of the Republic of Latvia, as the analysis of the facts and publicly available information indicated possible criminal offenses committed by Prosecutor Juris Juriss.

A. Lembergs emphasized that he would address the issue of the seized property because the lawyer had already analyzed the "unfoundedness and absurdity" of the charges against him in a sufficiently extensive manner in court debates and in the reply.

But the actions of the prosecutor as the facilitator of the proceedings and the maintainer of the state prosecution in resolving property issues can be described as "inadmissible and biased", "which significantly affected both the course of the criminal proceedings in general and the admissibility and reliability of the evidence obtained."

The goal and the main goal

"Everything set out here clearly confirms what has been said several times before: this criminal case is nothing more than a "bubble", a farce created by the prosecutor's office, largely by prosecutor Juris Juriss, against Aivars Lembergs, in which I was involved so that, first of all, Rudolfs Meroni and possibly other persons would have the opportunity to manage the property belonging to me and Līga Lemberga for a long time and to practically appropriate it. Secondly, in order to be able to unfoundedly accuse Aivars Lembergs as well under Section 195 of the Criminal Law for political and possibly other reasons. Without the actions that I am unfoundedly accused of under Article 195 of the Criminal Law, it would not be possible to prosecute Aivars Lembergs too under this article, whose conviction is the main goal of the whole "empty bubble" or farce - i.e. this criminal proceeding," said Anrijs Lembergs.

Trying to interrupt the last word

Prosecutor Aivis Zalužinskis, supported by the court, interrupted A. Lembergs' last speech twice in the first minutes, saying that "it is an attempt to slander Juris Juriss at the court hearing." For the third time, the court interrupted A. Lembergs on its own initiative, accusing him of "disrespecting the participants in the proceedings" and "making unverified statements."

The court did not allow A. Lembergs' lawyer Oskars Rode to defend his client. The court insisted that A. Lembergs in his last word should not refer to the public information, that what was included in his speech was not related to the criminal case under trial. When he got the floor for a moment, the lawyer pointed out that it was not the duty of his defendant to speak in the last word on the evidence examined in the case, but he could speak on the actions of Prosecutor J. Juriss that are directly relevant to the case.

Being practically left without a lawyer, A. Lembergs asked for a short break to be able to defend himself and get acquainted with the regulation of the Criminal Procedure Law regarding the last word.

After reading the regulation, he quoted Section 508, which states that “the chairperson of a court hearing may interrupt the last word of an accused, if he or she speaks on circumstances that do not have any relation to the case, repeats the same arguments on the same facts, delays the proceedings or shows disrespect to the court or participants of the case." As A. Lembergs pointed out in his last word, there was no reason to interrupt, emphasizing: "It is my duty to point out a possible criminal conduct by a public official."

The court allowed him to continue.

The legal task of seizing shares and stocks is to prevent the decrease or loss of the value of these shares, as well as to prevent the change of ownership of the shares owned by the person. "Seizure of property is recognized as useful and can serve the purposes specified in the Criminal Procedure Law only if the seized property will be able to fulfill the purpose that was ensured by the applicable seizure of property after the final decision," A. Lembergs emphasized.

He referred to numerous publications in the press and on websites in recent years describing how prosecutor Juris Juriss had "participated and actively supported" Rudolfs Meroni so that he could "appropriate the property seized from Līga Lemberga and Anrijs Lembergs."

These publications show examples that prosecutor Juris Juriss "has given Rudolfs Meroni advice, instructions, means, as well as removed possible obstacles" so that R. Meroni can "realize the property belonging to Līga Lemberga and Anrijs Lembergs entrusted to him in criminal proceedings."

As an example of the fact that the property has actually been realized, i.e. sold, A. Lembergs mentioned the transaction with the shares of Ventspils Nafta owned by JSC Latvijas Naftas Tranzīts. As has been written many times, these shares were sold for 70 million euros, although compared to the share price of Ventspils Nafta in other transactions, they could have been sold for several hundred million euros.

A. Lembergs pointed to J. Juriss' correspondence with R. Meroni's lawyer Benita Balana, which was published in the press, in which the prosecutor recommended JSC Latvijas Naftas Tranzīts not to turn to the person conducting the proceedings - the court - but to send the application for permission to perform the transaction directly to J. Juriss, who promises to “provide an opinion in accordance with the best interests of JSC Latvijas Naftas Tranzīts”, i.e. a permit to sell the shares of Ventspils Nafta at a certain price.

But the transaction with the shares of Ventspils Nafta owned by JSC Latvijas Naftas Tranzīts caused significant damage to the legal interests of the Republic of Latvia, causing material damage to the Republic of Latvia of several million euros, as the state will be responsible for the reduction of my and Līga Lemberga's property, regardless of what judgment the court will make in this case,” A. Lembergs emphasized.

The fact that the actions have been carefully planned out beforehand is evidenced by the current events where the court decision of August 17, 2020, by which R. Meroni has been removed from the custody of the seized property, cannot be fulfilled.

Citing several examples, A. Lembergs said that "Prosecutor Juris Juriss has also influenced witnesses and done other actions that have contributed to distorting the principles of witness assessment, as well as violated the secrecy of the investigation by disclosing to third parties the evidence obtained during the pre-trial investigation."

A. Lembergs has also analyzed in detail the e-mail correspondence of R. Meroni and J. Juriss, which were published on the Internet some time ago. What is especially valuable in this analysis that A. Lembergs was the first to compile these conversations together with real events, that is, to analyze them in the context of real events. It would no be not possible for a person who is not sufficiently knowledgeable in the circumstances of the case, to whom not all the materials of the case are available, to perform such an analysis.

According to A. Lembergs, J. Juriss' correspondence with R. Meroni confirms that they have coordinated with the witness the actions to be taken to advance the criminal proceedings, the witness has been informed about the content of the previously given testimonies, as well as about future questions to be asked during the testimony.

Is "this correspondence between the prosecutor and the main witness of the prosecution not just the visible part of the iceberg of cooperation and informal relations they have established?" rhetorically asked A. Lembergs.

One message shows that J. Juriss and R. Meroni not only corresponded by e-mail but also met in person and called each other. This is evidenced, for example, by the following e-mail from 2008: “Mr Meroni, referring to our telephone conversation on 4 July, I am sending you an excerpt/extract of the decision to lift the seizure of the property belonging to Līga Lemberga in your custody. (See attached). Sincerely, Māris Urbāns. Juris Juriss.”

Why is J. Juriss sending such an informal e-mail instead of a formal decision to lift the seizure of property? A. Lembergs explained: "There is no evidence in the file that Rudolfs Meroni was ever formally notified of the lifting of the seizure of the part of the property belonging to Līga Lemberga. I believe that Prosecutor Juris Juriss deliberately sent this text of the decision to Rudolfs Meroni /informally/ so that Rudolfs Meroni was not officially informed about the lifting of the seizure of property and could continue his possibly criminal activities with the released part of Līga Lemberga's property.”

A. Lembergs mentioned many arguments, from which it can be concluded that R. Meroni has corresponded directly with the prosecutor J. Juriss and not with any other private person.

Considering that it is the duty of the court "to prevent the case from being heard on the basis of fabricated, false and unverifiable evidence and to respond to information provided to it which contains information about the alleged criminal conduct of prosecutor Juris Juriss," Lembergs requested an acquittal, and "to take a side decision on the possible criminal conduct of prosecutor Juris Juriss."

On Monday, Neatkarīgā will summarize what Ansis Sormulis said in his last word, who also asked to be acquitted. Next week, it is planned that the last word will be said by Ventspils Mayor Aivars Lembergs, to whom the court has allocated 4 court hearings, instead of the requested 30 court hearings.