In his last word in the Riga Regional Court, businessman Ansis Sormulis figuratively illustrated the disproportionately long so-called Lembergs' criminal proceedings, in which he has been dragged into on meaningless and fabricated evidence, by saying that if he had attacked someone with a knife on December 20, 2006, he would have already served his sentence.
08.02.2021. Uldis Dreiblats, Ritums Rozenbergs 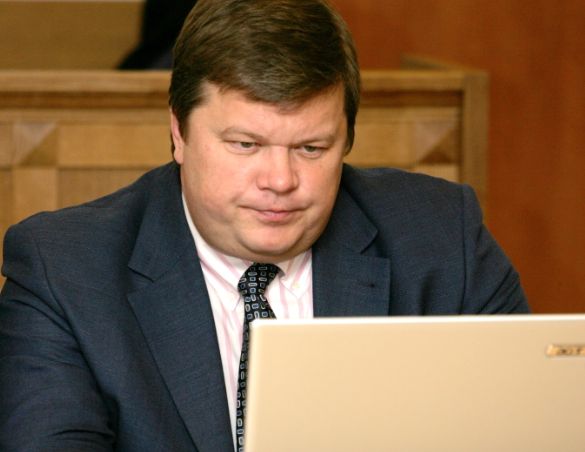 BUSINESSMAN ANSIS SORMULIS (pictured) has been accused by prosecutors to "fish for" evidence against Aivars Lembergs and trying to force him to testify. ©Kaspars KRAFTS, F64 Photo Agency

As A. Sormulis pointed out in his last word, he was dragged into the case on the afternoon of December 19, 2006. At his country house residence, seven KNAB employees arrived to do a search, as well as two prosecutors of the General Prosecutor's Office - Andis Mežsargs and Krišjānis Rudzītis.

The search continued in the evening at his place of work. After that, it started again at 1:15 at night, so now already on December 20, back at his home until 6:30 in the morning. This alone does not end the repressive actions taken against the entrepreneur in the framework of the criminal case. In the summer of 2007, he was imprisoned for 40 days in the first building of Riga Central Prison.

Later, researching the materials of the criminal proceedings, A. Sormulis tried to find out what the prosecutors and KNAB employees were looking for in his house and workplace. It has been revealed that they sought anything that could help to accuse Ventspils Mayor Aivars Lembergs, and absolutely nothing on the allegations made against him - neither something related to JSC Naftas parks 100 or SIA LatTransnafta, nor anything in connection with the testimony of the director of SIA LatTransnafta, the now-deceased Juris Šķibelis, nor anything related to Ventspils United Baltic bank, of which A. Sormulis once was the chairman of the council and this is one of the aspects of his accusation.

A. Sormulis called these searches “fishing for evidence expedition”, which have already been condemned in the judgments of the European Court of Human Rights.

According to A. Sormulis, now, after 15 years of criminal proceedings, convincing evidence has been obtained that the evidence in the crimes charged against him raises reasonable doubts.

He called the fifteen years spent in criminal proceedings an absurd time. "If I had stabbed someone with a knife during the search on December 20, 2006, I would have already served my sentence and would be free now," A. Sormulis described the duration of the criminal proceedings against him emotionally.

In his speech, A. Sormulis analyzed the testimonies of J. Šķibelis, the main witness of the charges against him (as it has already been written, the accusation claims obvious absurdity that A. Sormulis had extorted the shares of SIA LatTransnafta from the technical director of SIA LatTransnafta J. Šķibelis, which actually belonged to JSC Naftas parks - 100), their truthfulness, accusation episodes in connection with the increase and decrease of the share capital of SIA LatTransnafta. The businessman called the efforts of prosecutors to see money laundering in increasing and decreasing the company's share capital absurd.

Among other things, a few years ago, companies belonging to the Vitol group publicly demonstrated how to increase and then reduce share capital, and no one accused them even of tax optimization, not even speaking of money laundering. The Firmas.lv database shows that in May 2014 the share capital of SIA Ventspils naftas termināls was increased by one million to 78.5 million, in December already to 111.7 million, but in June 2020 the share capital was reduced to 86.7 million. JSC Latvijas kuģniecība, which belongs to the Vitol group, performed this procedure even more efficiently - in June 2014, its share capital was increased to 146.2 million, but in March 2016, it was reduced to 1 million, only to increase again to 61.2 million in three months.

A. Sormulis also mentioned many examples of how prosecutors hid documents justifying the accusation against him in another criminal proceeding. Listing the many irregularities in the criminal proceedings, the businessman asked the court to admit that there were reasonable doubts about the accusations against him: "I am asking you to leave me alone and acquit me," A. Sormulis concluded his last word.