Aivars Lembergs gets silenced even in his last word

At the fourth (i.e., last) hearing, at which the court allowed Aivars Lembergs to have the last word, the speaker was given an additional half-hour, i.e. the time spent during the previous hearing for the Court Administration to fix the online connection. After that half-hour had elapsed, the court simply interrupted A. Lembergs' speech, announcing that the hearing was closed, and the verdict will be announced on 22 February.
12.02.2021. Uldis Dreiblats, Ritums Rozenbergs 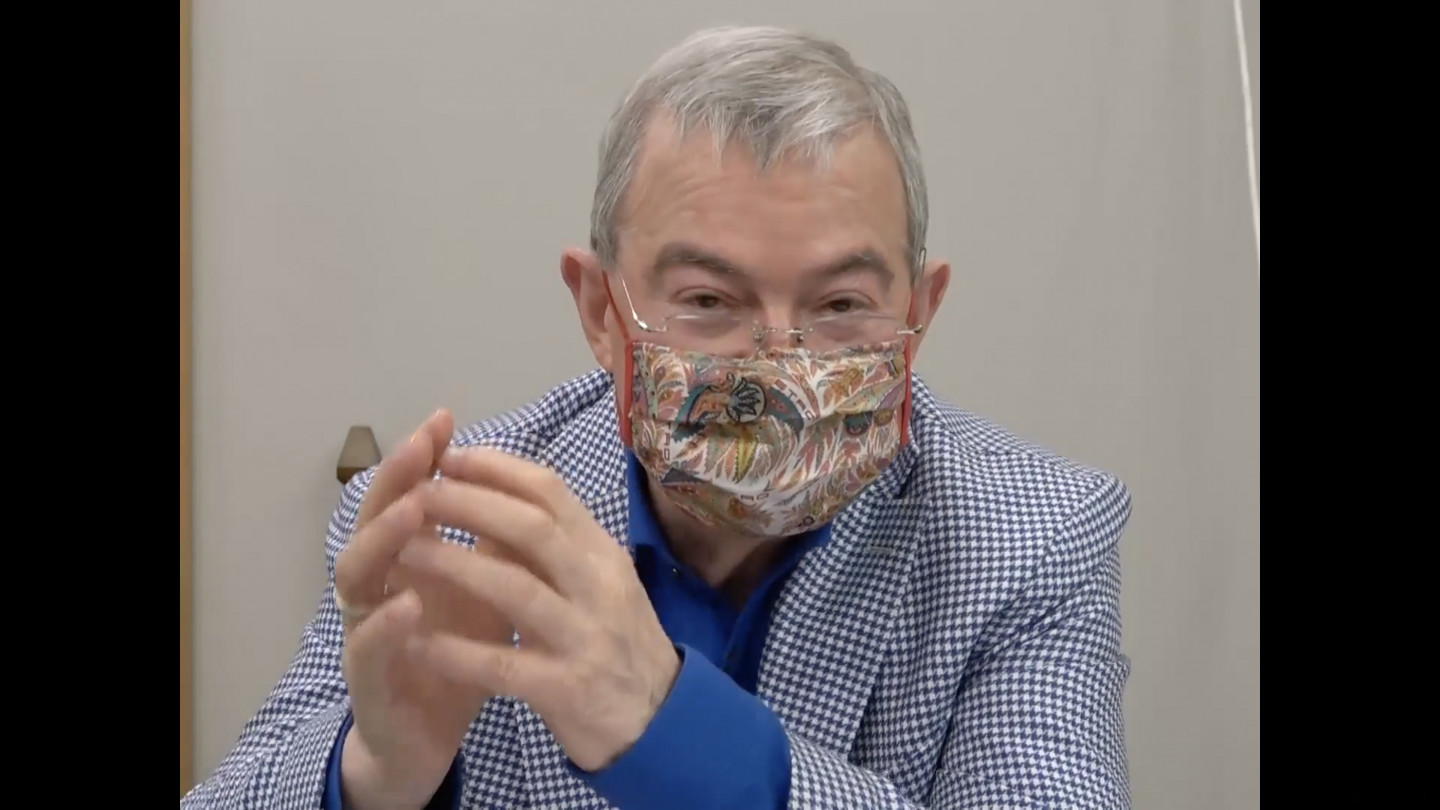 STILL HAD MUCH MORE TO SAY. Prosecutors did so that Aivars Lembergs could not testify in the pre-trial investigation, and his testimony in court was significantly restricted. In the end, his last word was also restricted, even amending the law before it, which previously stated that the last word must not be interrupted. ©Ekrānšāviņš

Prosecutors are not some sort of mathematicians

On the last day, he continued to analyze the misconduct and unresolved contradictions in the prosecution, as well as the seizure decisions made by prosecutors.

He illustrated with facts the discrepancies between the allegations that he owned shares in certain companies and the rights of the true beneficiary, comparing these allegations with the actual entries in the companies' stockholder registers, which the prosecutors themselves had attached to the criminal case.

For example, the property rights of A. Lembergs mentioned in the indictment in many joint stock companies, such as Ventspils Commercial Port, where “Aivars Lembergs and/or Anrijs Lembergs and/or Līga Lemberga together in equal parts own” a certain part of the rights of the true beneficiary, does not coincide with what is written in the decision on seizure of property.

A.Lembergs drew attention to the fact that each stock is one whole unit and they cannot be presented with a decimal point, even more with a number that is not divisible into three equal parts, as it should be if the shares actually belonged to three persons. This means that the amount presented cannot in any way be divided into equal parts, as the prosecutors point out in the prosecution. "Prosecutors obviously were not too good at math when writing the indictment," the mayor of Ventspils concluded. He mentioned that, according to the law, the true beneficiary can only be a natural person and not, as stated in the indictment, several persons “together” “and/or”.

A.Lembergs also mentioned the stockholder books of companies attached to the materials of the criminal case by the prosecutors themselves - the names of Lembergs do not appear in them. According to A. Lembergs, no one has prevented the prosecutors from resolving such contradictions during the 12 years of legal proceedings.

As A. Lembergs explained, if the contradictions had been eliminated, many sections of the accusation would have been removed, thus many volumes too. Thus, this trial would have been much, much shorter.

"All sorts of commissions are being set up to investigate why the criminal proceedings are so long, which mostly refers to the process involving yours truly. In this context, it would have been good to seek the views not only of prosecutors as to why the inevitable contradictions in the charges are not resolved, but also to a specialist as to why such criminal cases are being referred to the court at all. Cases with such unavoidable contradictions cannot be referred to court. Does anyone monitor the prosecutor's decision? His decision to take the case to court cannot be challenged. The case goes to court. The court and you then read this - "together in equal parts" and parts that are not divisible by three. If there were no such contradiction, there would be 30-50 volumes less in the case. These are years of litigation. This must be addressed in order to respect reasonable time limits in criminal proceedings, and not, as in my case, by changing the law and prohibiting defense. It is not a procedural economy, it is a violation of human rights," A. Lembergs concluded.

Anything can be declared as the true beneficiaries

In its turn, the Register of Enterprises has provided him with an answer that does not contain the required information. The answer has been appealed and the case has been scheduled to be heard in the Regional Administrative Court on April 25 of this year.

Then A. Lembergs touched on the millionaires recognized as victims in this criminal proceeding, briefly describing these persons.

He drew attention to the agreement of June 6, 1995 between the President of SWH Ainārs Gulbis and the then Deputy Chairman of the Latvian Farmers' Union (Latvijas Zemnieku savienība, LZS) Jānis Kinna attached to the criminal case by the prosecutors. As it is known, A. Gulbis is one of the three millionaires who have been recognized as victims in the so-called Lembergs case.

"In the indictment, Lembergs was presented as a giant "King" with a huge influence and power provided by the status of the chairman /of the Ventspils City Council/, not stating that he did not make administrative decisions and that he had only one vote in the City Council as a council member. The indictment says that I had a huge influence and everyone gave me bribes.

Prosecutor Ms. Paegle also spoke about this in the indictment. The accusation was based on this influence - the others were without influence, but Lembergs could do anything he wanted, meeting with ministers and prime ministers. We can see the agreement of June 6, 1995 of the victim Ainārs Gulbis. At that time, after the accusation, Gulbis, trembling like a leaf, had given me the shares of SIA LatTransnafta owned by SWH Rīga Zurich. But here Gulbis makes an agreement with the LZS, which is the oldest and most influential party in the country, not some small fry.” The document mentions that the joint stock company SWH led by Ainārs Gulbis, “in order to develop Latvian agriculture, science and education”, will financially and consultatively support the LZS election program in the 1995 Saeima elections. To achieve these goals, SWH will pay 100,000 USD. The document also states that “in order to ensure high professionalism and achievement of the objectives referred to in the first paragraph, if the LZS elections result in the right to determine the composition of the government or to appoint ministerial positions in the coalition government, or to recommend LZS party members in state work for the position of the Director General of the State Property Fund, the position of the Chief of Customs, the position of the Head of the State Revenue Service, LZS will consult with SWH on the mentioned positions and undertakes to recommend people for these positions, agreeing with SWH on the professional abilities of the candidates for the said positions and suitability for the proposed position."

Senate: the truth is in the registers!

As clear evidence of the truthfulness of his position regarding the shares and stocks that should be declared by a public official, as well as the sources to verify the truthfulness of what is declared, A. Lembergs invoked the decision of the Senate of the Supreme Court (SC) of 2 February this year 12812001312, SKK-1/2021 for an accusation under Section 219 - these accusations have also been brought against A. Lembergs.

In its decision, the Senate of the Supreme Court points to the necessity to interpret the concept of “actually owned shares” legally correctly. The Senate has indicated that the only correct source for verifying the ownership of shares is the Commercial Register and the entries made in it. The shares of enterprises are registered in the Register of Enterprises, but the stocks - in the stockholder register. The decision of the Senate also states that each participant or stockholder has the right to receive an extract from the board of the company with a confirmation of the shares or stocks owned by him in the company. As the Senate has pointed out, if there was an obligation to declare or register “actual ownership” in the declarations of state officials, then “legal uncertainty would be created in the Commercial Register”. The Senate has indicated that the owned shares in the declarations of state officials can be viewed only within the scope of the Commercial Law. It follows from the decision of the Senate that the declarations of state officials may reflect only specific shares or stocks, the ownership of which can be ascertained in the Register of Enterprises or the stockholder register.