42 previously unknown hillforts have been discovered in Latvia

Over the last three years, researchers have discovered 42 previously unknown hillforts, which is much more than researchers managed to find between World War II and the present day. The number of new discoveries is likely to increase, as almost every week enthusiasts of ancient history receive information about possible, hitherto unknown hillforts in Latvia, which appear on laser terrain maps as earth surface changes that are similar to ancient fortifications.
15.02.2021. Ilze Šteinfelde 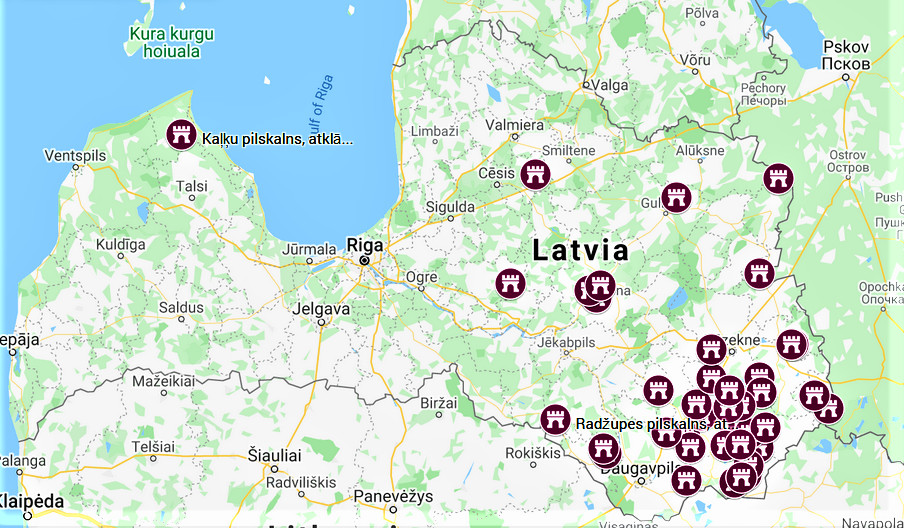 Hillforts are the most visually significant type of Latvian archeological monuments, which have not only the scientific importance as archeological research objects, but are also vital to the cultural and historical landscape, the formation of local identity and national self-confidence, its development and strengthening, and as tourism products. Since the end of last year, the Latvian Academy of Culture (LAC) has been working on the research project “New discoveries of hillforts in Latvia 2018-2021: cultural and historical significance”, headed by the professor of the academy, archeologist, Dr.hist., Dr.habil.art. Juris Urtāns. The project under the Fundamental and Applied Research Program will be carried out for one year and is funded by the Latvian Council of Science.

Within the framework of the project, the identification of new hillforts and the processing and compilation of the obtained data will continue, as a result of which a monograph will be prepared in order to include these new discoveries in the cultural environment of Latvia and the Baltic region as soon as possible. In parallel with the work of the project implementers in the archeological landscape, archeologists Juris Urtāns and Jānis Meinerts, a cultural sociological field study will be carried out - Rūta Muktupāvela, Ieva Vītola and Lolita Ozoliņa, researchers of the LAC Research Centre, are looking to find out the perception, significance and impact of the newly discovered hillforts in local communities. It is also planned to prepare documentation for the potential inclusion of the newly discovered hillforts in the list of state-protected cultural monuments.

Modern technology helps out the researchers

From 2018 to 2020 and, presumably, also in 2021, thanks to the public availability of laser scanning or LIDAR data, an explosive rediscovery of hillforts has taken place and will continue, especially in the eastern part of Latvia. LIDAR is a remote sensing technology that uses visible and infrared waves. The most important function of the laser is the continuous generation of a beam and the reflection of this beam against an object, which allows determining the distance to the object.

LIDAR technology is a relatively new tool that has been used by archeologists only since 1985.

Experts emphasize that it is an expensive but at the same time a very effective method, which allows to find out in a relatively short time what features of the terrain are hidden, for example, under the canopy of trees, according to which specialists can say - there was a ditch here, but over there was a protective embankment. This does not mean that this technology is stealing work from archeologists, because it is only possible to find out when a particular object has been made by making excavations.

Most newly discovered hillforts are located in Latgale

Marking the newly discovered hillforts on the map, Neatkarīgā concluded that most of them are located in the east of Latvia. Some hillforts are even quite close to roads and cities. Radžupe hillfort, as can be deduced from geographical coordinates, is located about 500 meters from the road that connects Aknīste with Jēkabpils. Probably none of those who travel along this road even thought that the hill seen across the fields is an ancient hillfort.

Meanwhile, Ķieģeļceplis hillfort is located only a few kilometers from Rauna. To find and see the hillforts for yourselves, you can use this map, created by Neatkarīgā, using the coordinates of hillforts published on the LAC website.

Hillfort with a recreation area

The newly discovered Dudari hillfort is located on the eastern side of Rušons Lake, where the lake is very carved with peninsulas and bays. Archeologist Juris Urtāns says that there was once a Dudari village on the largest peninsula. Even now, there are several farmsteads on the peninsula, and the name "Dudari" is well known and widely used. A good quality gravel road leads to the Dudari peninsula from the Rēzekne - Daugavpils highway. The Dudari peninsula is more reminiscent of a large island between two bays of Rušons Lake (the bay to the east of the hillfort is marked on the map as Ūbeļu Bay), which is connected to the mainland by a narrow strip of land and the aforementioned road. At the narrowest point of this strip is a NW-SE-oriented hill. The current road leads along its southwestern foothills. There is a rest area on the side of the road and at the foot of the hillfort - a table, bench and toilet, once it had electricity and events were organized there. The place is scenic, from here there is a distant view to the west towards Rušons Lake. 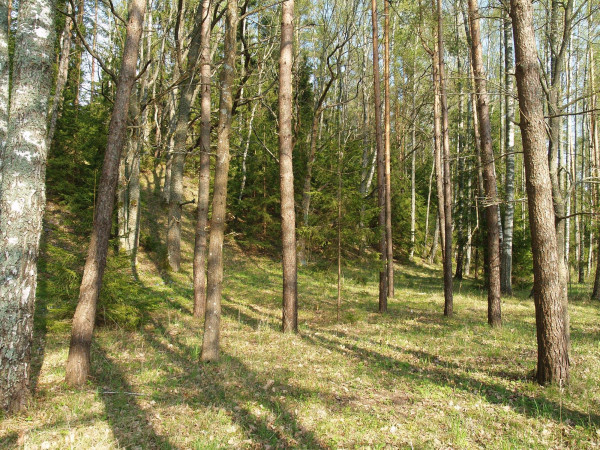 “On April 13, 2018, Mareks Maļkevičs, a reconstructor of the past, informed about a possibly previously unknown hillfort on the eastern side of Rušons Lake. He had seen it by looking through the aerial laser scanning materials. Later, Mareks Maļkevičs went to this place, looked at it and thought that it really was a hillfort. At that time he had found pieces of pottery made without a wheel. On April 30, 2018, together with M. Maļkevičs, the site was inspected. It really turned out to be a new, previously unknown hillfort, which, in coordination with the finder of the hillfort, was given the name of Dudari hillfort after the name of Dudari village. Judging by the publication of V. Zeps, the name Dudari does not appear in the earlier collections of Latgale place names,” Juris Urtāns writes about the discovery of this hillfort.

The newly discovered Dudari hillfort is large, partly destroyed by wartime excavations in ancient times, and it is definitely marked as a hillfort by three artificially embanked ramparts with corresponding ditches at one end. The ancient cultural layer on the hillfort plateau and the pottery fragments found in it can be attributed to the Iron Age, more likely - the first millennium AD - the early and middle Iron Age. Pre-war maps show that at the southern foot of the hillfort there was a ranger's house with a significant name "Kapaņica". This word in the Latgalian language tradition means digging, dug-up ground, and in terms of meaning it could be related to the ditches and ramparts artificially dug and created for the hillfort.