Lessons our political architects can learn from the Trump impeachment

The US Senate vote on the impeachment of former President Donald Trump was very mundane and a bit boring - the senators with no intrigue voted as expected - not guilty. Democrats refused to question additional witnesses, while Republicans used only four of the allotted 16 hours of defense. Two thirds or 67 votes of senators were needed to find Trump guilty. Trump was found guilty by 57 senators who then quietly dispersed to enjoy the weekend.
16.02.2021. BLBens Latkovskis 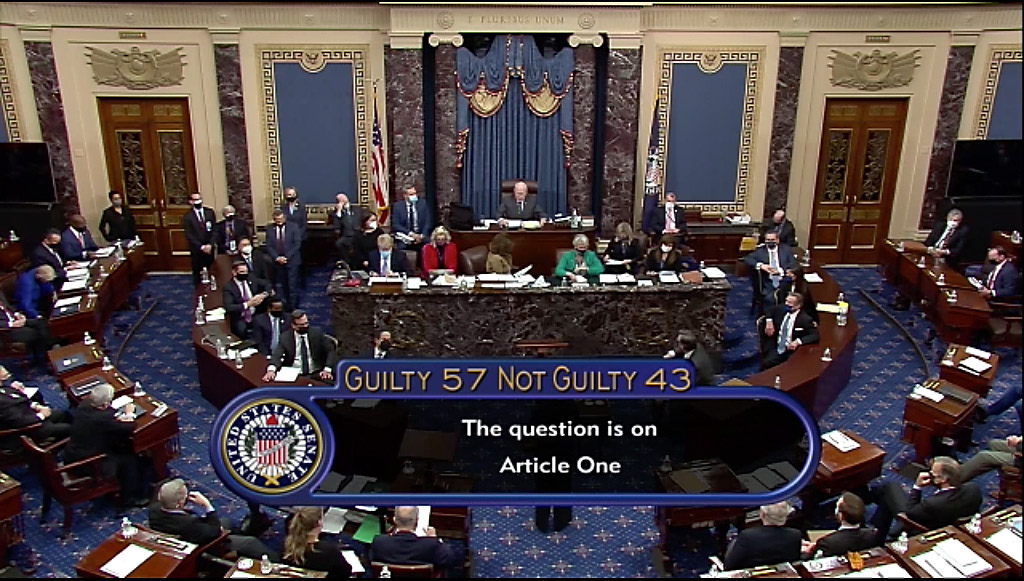 The Trump impeachment did not cause a particular public surge, even in a situation where a large part of the US public is still unable to quell their visceral hatred of the former president, so the question is: why do we still need to talk about it? Simply because, by watching the political process in the United States, we can better understand how democracy "works" and what we need to do to make it "work" for us as well. To make such cases like the current vaccination priority for public officials less frequent. The Trump impeachment procedure has once again demonstrated how effectively the famous American checks and balances system works and that we, too, should work harder to improve our balance system to improve our democratic system.

What is the short story of Trump's second impeachment? Democrats, starting with Trump's unexpected victory in the 2016 elections, have accumulated dislike, even hatred, for this political "upstart." When he lost the election in 2020 and the Democrats thought they had finally gotten rid of Trump, the latter refused to admit his loss. This fueled the Democrats' disgust at him. The strange January 6 "leathers and horns coup" brought the situation out of the impasse. Thanks to this "uprising", the Democrats gained a certain majority of public opinion and hoped to "completely crush" the hated Trump while riding on this wave. A similar situation arose in Latvia in 2011, when the Saeima refused the pointless (but deeply symbolic) searches of the “oligarch” Šlesers' property. At that time, the politically weak president of the "zoo", using the shortcomings of the balance of power, easily overturned the chessboard with all the figures, initiating the dismissal of the Saeima, which was enthusiastically welcomed by the public.

The Washington political class and all “progressive” humanity would perceive Trump's impeachment and, consequently, his removal from the political scene forever with the same or even greater enthusiasm as Latvian society in 2011 did the dismissal of the Saeima.

However, this is a time when we can look with envy at how finely the US system of political checks and balances works, which did not allow for easy political retaliation against a person who causes blatant discomfort to a large part of the political class.

Here, of course, it could be argued that perhaps the opposite was true: the system did not allow "justice" to triumph, as most Republicans simply voted by party affiliation because they do not currently have a more popular politician than Trump. However, this interpretation of the situation is not true. If Trump had indeed organized a real conspiracy to seize power not only in the White House but also in Congress, there is no doubt that there would be enough Republican senators to strongly condemn Trump and blame him for such actions.

The situation was similar in 1974, when, as the Watergate scandal deepened, US public opinion approached a common belief that President Richard Nixon had acted wrongly. At the time, Nixon, realizing that his party's senators would not dare to vote against public opinion, resigned before the impeachment procedure was initiated. There is currently no public consensus that Trump has organized an "armed uprising".

At the same time, the attitude of a large part of the US political class towards Trump is even more intolerant than it was in 2011 towards Šlesers in Latvia, not to mention the attitude towards Nixon in 1974. However, the US system of checks and balances does not allow this wave of hatred to do what Washington upper crust would be happy to do - to achieve the symbolic execution of a disliked politician in the central market square (Pennsylvania Avenue).

There is no doubt that in our country, in accordance with Latvia's political mechanics and the prevailing political traditions, the destruction of such a demonized politician would take place without delay. The fact that the politically motivated Trump impeachment procedure ended without a tangible result only demonstrates the strength, not the weakness, of US democracy, as this kind of effective retaliation with opponents always points to structural shortcomings, and not the other way around. This should also be remembered by the architects of our political life.