Today, the meeting of state secretaries will consider the changes in the regulations of the Cabinet of Ministers prepared by the Ministry of Culture (MoC), which defines a fee or, as the regulations say, a levy for data carriers to be charged for each smartphone sold and all types of computer hard drives. The MoC intends that the new procedure would enter into force on April 1.
18.02.2021. Ilze Šteinfelde 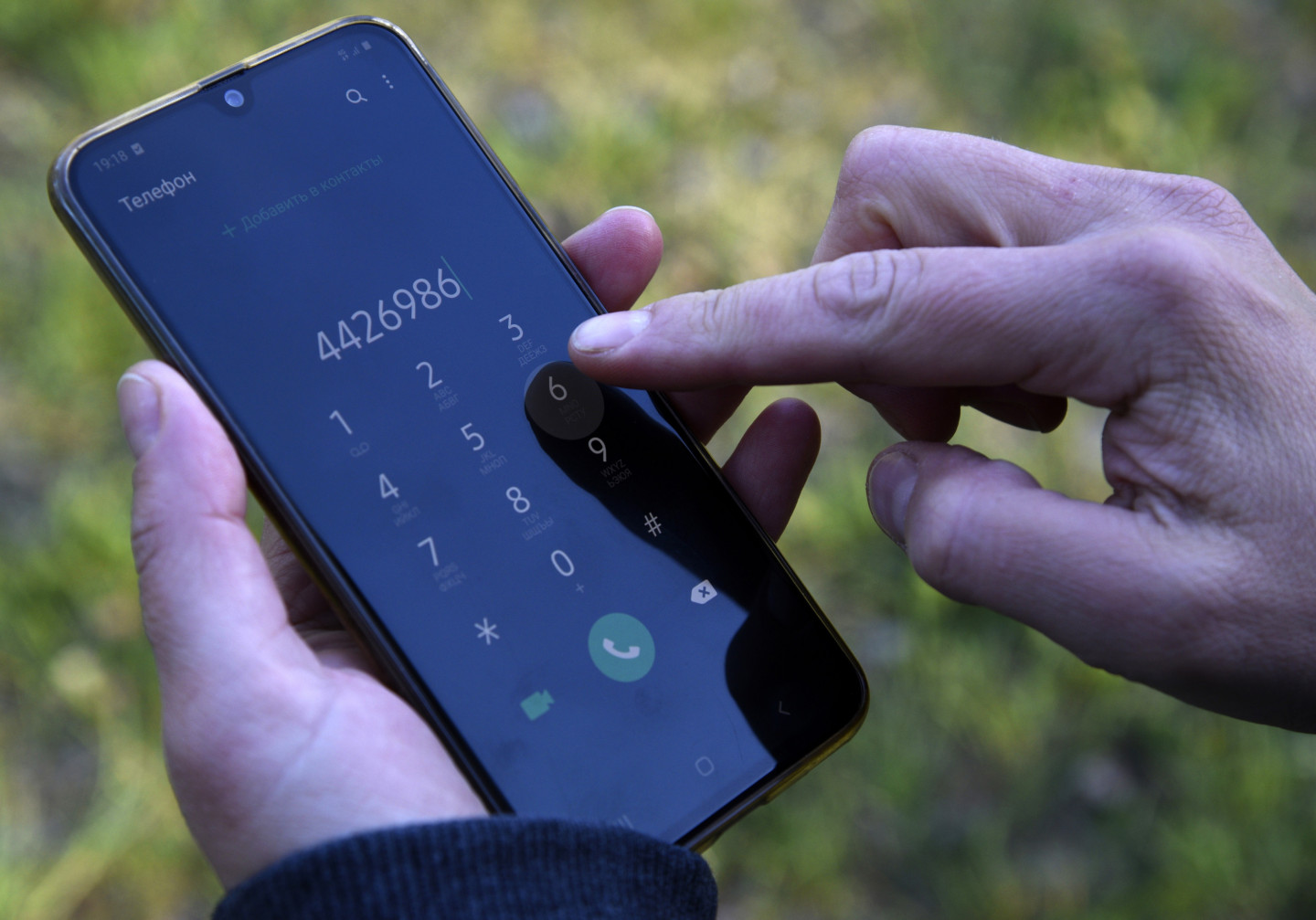 Normunds Bergs, Chairman of the Board of SAF Tehnika, believes that trying to take money from the whole society for having a phone in their pockets or a hard drive in their computer is neither meaningful nor correct.

This is what most of the public thinks. A survey conducted by the research agency Norstat found that 80.9% of respondents do not support the idea of ​​applying a data carrier fee to mobile phones. Only 6.2% of the population responded positively to the introduction of this fee.

"AKKA/LAA (the Copyright and Communications Consulting Agency/Authors’ Union of Latvia) and the Ministry of Culture plan to implement a data carrier fee for each purchased smartphone and computer hard drive starting from spring, citing a study that found that less than five percent of respondents copy content they legally own to their smartphone. However, the fee would also have to be paid by everyone else who do not copy anything on their smartphones. The goal seems to be noble - to defend the entertainment business's right to be paid for its own creation. However, it also raises the question of whether this is the right way to go about it and whether one business does not put itself above the others in this way. And should society as a whole pay for what only four out of a hundred people do?” rhetorically asks N. Bergs. According to him, following this logic, it would be fairer to impose an ear tax on the whole nation, because we consume music with our ears and we can accidentally listen to a piece of music. "In the current version, the deaf will have to pay such an ear tax as well. As long as you have a phone in your pocket or a computer on your desk,” says N. Bergs indignantly.

The data carrier fee does not seem to be too high - 1.50 euros for a smartphone (excluding VAT) and 2.85 euros for a hard drive (excluding VAT). However, if the cheapest hard drives cost from 25 to 35 euros, then it turns out that the fee is about 10% of the value of the product. "In addition, we have already paid a fee of 2.85 euros for the computer itself. When combined with IT profit indicators, such a fee practically excludes some players from the market. This significantly distorts the IT and electronics market. It will not remain empty - considering that the market is uniform throughout Europe, the system will be reorganized, and the losers will be Latvian entrepreneurs, but the winners will be those who work abroad. Latvia's losses from unpaid taxes of IT companies will be much higher than AKKA/LAA's revenues from this fee,” N. Bergs has calculated.

Levy on data carriers is not a new fee. It is already charged for CDs, DVDs, computers.

"It should be remembered that AKKA/LAA is a private association that spends 1.4 million euros a year to support itself. In terms of budget, this association is on the same level as the Latvian Chamber of Commerce and Industry, which has a similar budget from which the arbitration is maintained. However, LCCI represents all Latvian companies in the widest range of problems. If AKKA/LAA's 1.4 million euros are from seven million euros collected in fees per year, it is not difficult to calculate that this organization takes 20% from the authors' turnover for the management process. Excellent business! With such a huge budget, you can hire imaginative people who will find hundreds of new ideas from where to take money to replenish their pockets,” says N. Bergs.

Fee even for sharing funny videos

Linda Zommere, Senior Legal Adviser in the Copyright Division of the Ministry of Culture, admits that it is precisely the inclusion of smartphones in the list that has provoked the most active opposition from large retailers.

According to L. Zommere, they also circulate to the public a very simplified explanation of the data carrier fee, namely that the term "copying" refers only to the storage of music on a computer. However, within the meaning of the regulations of the Cabinet of Ministers, private copying of authors' works is a much broader concept than creating a copy of a song or film. 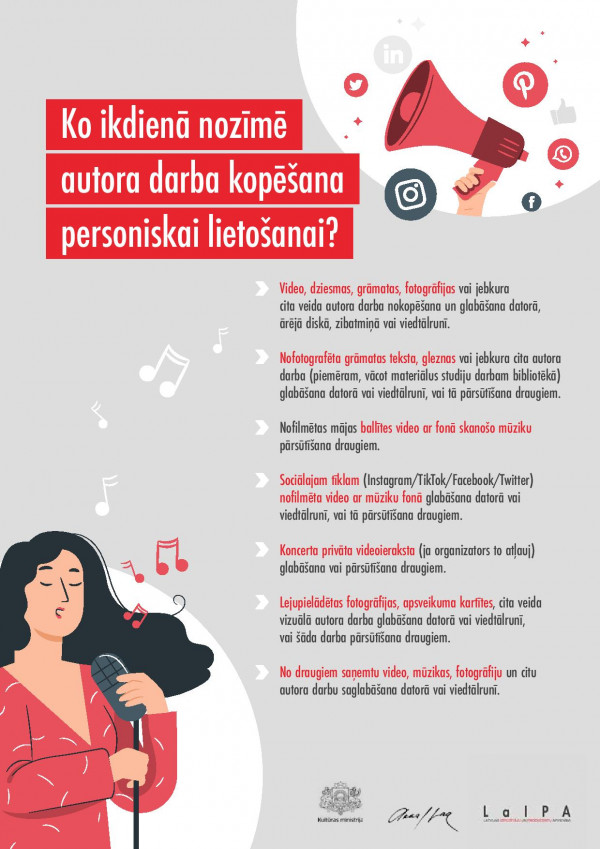 What does it mean to copy an author's work for personal use? / Ekrānšāviņš

"First of all, it must be borne in mind that the data carrier fee does not apply only to music or videos, but to any work of copyright. And in this sense, photographing the books, poems or works available in libraries for private use (for example, for writing term papers) is also copying,” says the Chairman of the Copyright and Communications Consulting Agency/Authors’ Union of Latvia (AKKA/LAA) Kārlis Kazāks. "And it's the smartphones that matter most, because if we previously just copied what we needed on a copier in the library, now we're photographing it on our smartphone and using it for our own purposes."

Rūdolfs Budze or DJ Rudd, a member of the council of the Latvian Performers' and Producers' Association (LaIPA), also expresses a similar opinion. "I understand the desire of big traders not to reduce their share of profits, but it is clearly demagogic to lead the discussion to absurd statements. I think that almost any of us has saved a clever video, photo or other author's work found on the Internet to a computer or smartphone and shared it with friends,” says Rūdolfs Budze, emphasizing that it is also copying an author's work for personal use.

At the same time, along with the changes in the regulations of the Cabinet of Ministers, it is planned to no longer collect this fee for CDs and DVDs, as almost no one buys and uses them anymore.