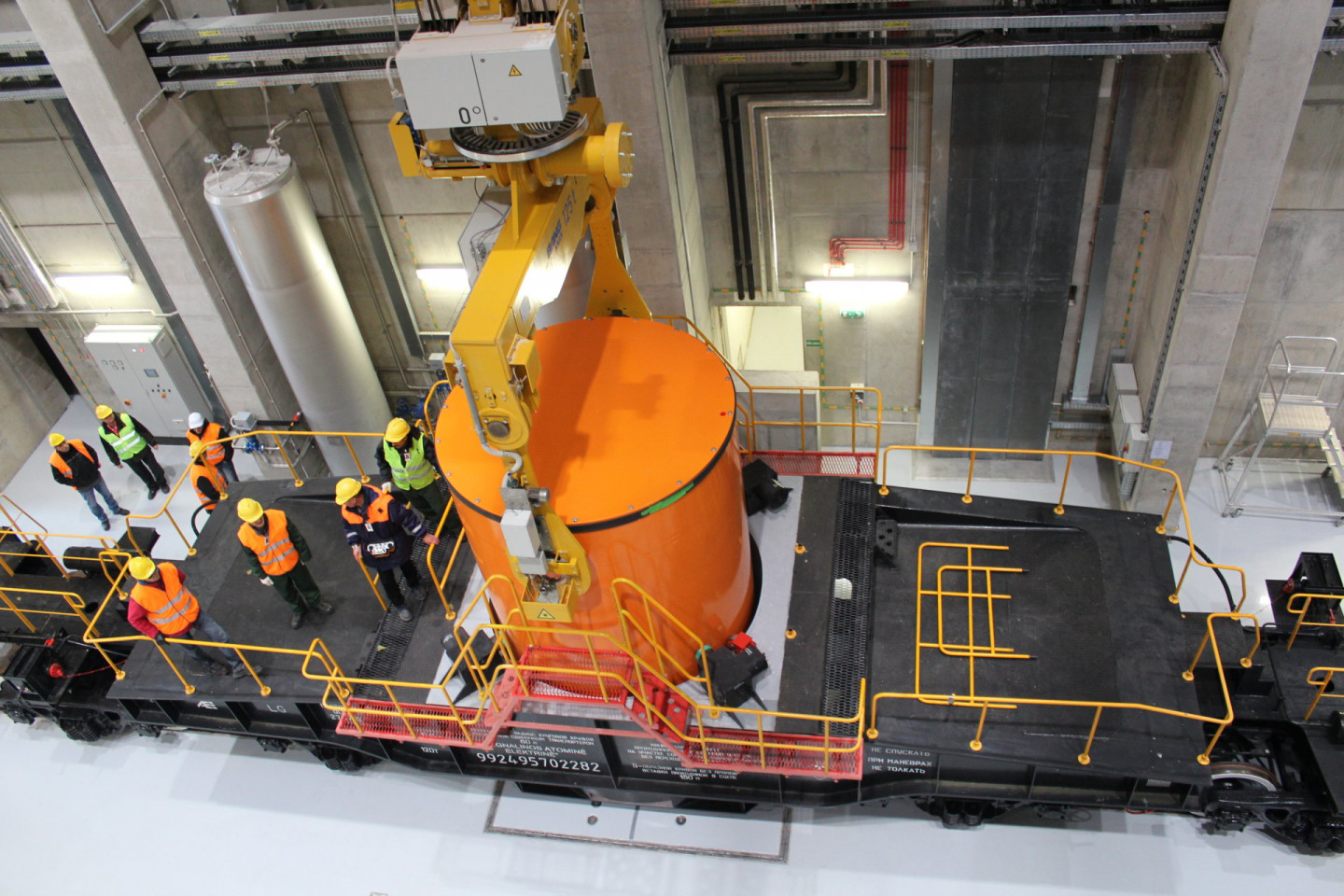 The last undamaged fuel capsule has been removed successfully. The following part will be more complicated. Work with damaged nuclear fuel is still left. ©Publicitātes foto

On February 19, a very important and possibly dangerous event from the point of view of nuclear safety took place very close to the Latvian border. At Ignalina Unit 2, the last undamaged spent nuclear fuel was removed and delivered to a temporary storage facility. Undamaged fuel was removed from Unit 1 last summer. Preparations will now begin for the removal of the damaged nuclear fuel, which will be an even more complicated step.

This was reported on the nuclear power plant website. So far, the event has been successful - without accidents.

Everything that happens in the industrial territory of Ignalina NPP also matters to Latvia, because the station is located less than ten kilometers from the Latvian border and only 30 kilometers from Daugavpils. The nuclear power plant was shut down on 31 December 2009 and is now being transformed into a huge radioactive waste repository. Containers of various types and degrees of safety above and below ground will be located in special structures within a radius of one and a half kilometers around the Ignalina NPP. So there will be hundreds of containers near Latvia, full of spent nuclear fuel and radioactive waste.

After all the fuel has been removed from the power units and packed in safe metal and concrete casings, the dismantling and decontamination (procedure for prevention of radiation pollution) of the station itself will also begin. This is a measure that could theoretically have an impact on the environment, including the Latvian environment. Therefore, the website of our Environment State Bureau contains a "Notice on the public discussion and the possibility to submit proposals for the environmental impact assessment of the dismantling and decontamination of Units A-2 and V-2 of the Ignalina Nuclear Power Plant". The discussion will continue until 25 February. Anyone who understands nuclear physics can go into the radiation predictions and radionuclide emission doses presented in the environmental impact assessment report: “Based on the assessment, the maximum annual representative dose will be 1.08Е-04 mSv, which is 1.08E-01% of half of the limited effective dose - 0.2 mSv due to radionuclide emissions into the air. The potential exposure of people in neighboring countries will be even lower because they are further away from the source of the emission.”

The Latvian society has to rely on the calculations made by the Lithuanians and the optimistic conclusion that the destruction of the reactor and packing it up in reinforced concrete coffins will not pose any danger.

Everything will be fine

Here are some quotes from the summary of the project under discussion:

“The planned activity will be carried out in the industrial territory of Ignalina NPP, far from permanent settlements in Latvia and Belarus. No impact on the population of Latvia and Belarus or obvious changes in the social and economic environment are forecast.

Considering that the radiological impact of the planned activity on the environment will be significantly lower than included in the plan, it can be stated that the planned economic activity will not affect the environmental components of Braslaw district of Belarus and Daugavpils region of Latvia.

If the spread of radioactive materials outside the borders of the sanitary protection zone (within a radius of 3 km) exceeds the norms, the Emergency Preparedness Plan becomes operational and the monitoring of the radiation situation in the SPZ and outside its borders is implemented. In view of the current situation, measures must be taken to protect the population outside the boundaries of the SPZ, as well as measures to limit the exposure of personnel."

Only the personnel can get hurt

And at the end of the project summary, again the general conclusion:

"The planned economic activity will not have an impact on the socio-economic or environmental components of the neighboring countries (Belarus and Latvia), nor on the health of the population of these countries."

In total, it is planned to dismantle and store 11 thousand tons of equipment at this stage of the Ignalina NPP decommissioning project. Most radioactive waste (84%) will be decontaminated to zero, which will no longer be subject to radioactive safety requirements.

It is planned that the complete decommissioning of the Ignalina NPP will be completed by 2038, and for Lithuanians, this slow process will serve as a constant reminder of the lost energy independence. Perhaps the situation is not quite as politician Andrius Kubilius predicted on the closure of the Ignalina NPP: "It seems that darkness and candlelight are waiting in our future." However, in its last year of operation, NPPs produced 70% of Lithuania's electricity needs.

Nothing has come of the plan to build a new and safe nuclear power plant near Visaginas. The Baltic States and Poland did not know how to agree on joint investments and split potential benefits. Meanwhile, the Belarusians built their Astravets nuclear power plant, put it into operation and are now burdening the European energy market with overly cheap electricity. Lithuanians can now only put pressure on their allies, including Latvia, so that we under no circumstances buy electricity from Belarus. For example, for security reasons - because the station is too close to the Lithuanian border. Technically, this is almost impossible but politically it is necessary. Just now, visiting Latvia for the first time, the new Lithuanian Minister of Foreign Affairs Gabrielius Landsbergis brought a report from the Ministry of Energy on the current electricity trade and opinion on the Astravets nuclear power plant. The Minister of Foreign Affairs of Latvia Edgars Rinkēvičs handed it over to the Ministry of Economics, but did not promise Landsbergis anything regarding the terms of consideration.