Rail Baltica, the new backbone of traffic, is being built

In addition to designing and building, the developers of the new railway line Rail Baltica have to perform another crucial task - to convince the population to use the railway in conditions when the existing railway services are extremely unfriendly to the user and there is neither a need nor a desire to drive somewhere. Because of Covid.
25.02.2021. Imants Vīksne 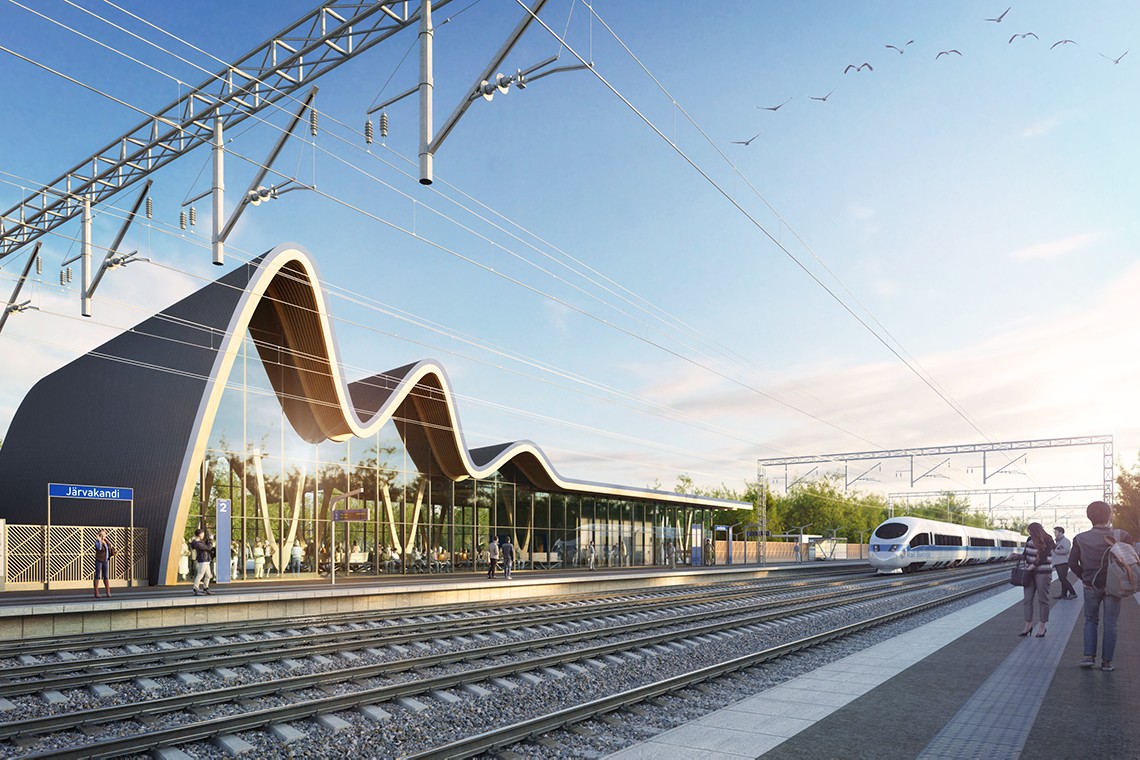 In 2026 or some point later, the train paid for by the European Union will arrive, and in order for it to make sense and benefit, not just accrue expenses, it is necessary to plan now how to make the train a habit of the population and the Latvian economy. These issues were discussed yesterday at the conference "Rail Baltica - new opportunities for regional traffic". At the event, this ambitious project was represented at all levels, from the Minister of Transport and the joint venture of the Baltic States RB Rail AS to the project implementers in very specific aspects. They, for example, told what the regional stations will look like. The largest ones - a pretty enough wavy look by Italian architects inspired from the Baltic Sea and old rural architecture, the medium ones - a traditional rectangular shape, the small ones will only have a canopy, all of which can be combined and grown in modules depending on the station's current size and in case the number of passengers will increase. The national identity in each country will be added with colors.

There will be many new stations

In general, the Rail Baltica project has optimism about the population of Latvia and the future movement of people.

Just a few years ago, the main message of the project to the public was that once the train was up and running, we would be able to travel to Berlin at a speed of 249 kilometers per hour. The local mobility aspect seemed insignificant to the implementers, and the municipalities that were interested in the project had to fight for stations to be marked on their territory. Now the situation has changed, there will be many stations. Apart from Riga Central Station and the airport station, 16 more stations are planned on the Rail Baltica route in Latvia.

Another 17th station will be built near Stradiņš Hospital. But that one will be located by the old width train track. Initially, trains will run every two hours, but after a few years, once an hour and at peak times - even half an hour. It will take an hour and three minutes to get from Salacgrīva to Riga. From Bauska to Riga - 49 minutes. Of course, it will be a difficult task to motivate people who now travel by private transport to switch to trains. For this to happen, just stations, rails and speed are not enough.

From Salacgrīva to work in Riga

Railways need to be part of a single transport system, so different modes of transport need to be aligned so that people can easily transfer from one to another. To arrive by bus or private transport and get on the train within minutes. Either change from the regional train to the international, or take the shuttle train to the airport.

The train will run fast - even the regional one. Up to 200 kilometers per hour. This means that, for example, Salacgrīva might be able to become just as big of a resort as Saulkrasti in the future. And the locals will be able to go to work in Riga. Distance will become a smaller obstacle than it is now. So the habits of the population will also change, they will be able to live further from the workplace than is currently possible. It is already urgent for local governments to consider this - what objects and what infrastructure to add to these station networks. Currently, design works are underway along the entire length of the Rail Baltica route for 650 kilometers, and shovels have already hit the dirt in all three project countries. As emphasized by the speakers of the seminar, it is important to follow the principle of one shovel, so that it wouldn't happen that the construction of the station is completed, the train arrives, but new construction works are happening all around, which are related to the integration of the station into local life. Of course, the most difficult will be to do this in Riga. There will be many new stations and tracks here, but very little has been done so far to integrate it all wisely into the capital's environment. The previous city council was not interested in it, the new council is interested, but have difficulties with finances. However, it is positive that the city is not in opposition to the state and also agrees that the railway should be given a more important role. Maybe even the role of the backbone of the transport system.

Optimism with a dark edge

For the time being, the positive improvements are too small for people to make significant changes to their travel habits. The fact that you can finally buy a monthly ticket for the train and the conductors don't look scruffy, this is all good. But there is also a need for new convenient stations and trains which can be boarded by less trained athletes and maybe even ordinary people. Trains must run with greater regularity. Minister of Transport Tālis Linkaits promises that all this will be. For example, a new railway station is already being designed, which will be located in Riga opposite the Alfa shopping center, and the first new electric trains will finally be delivered next year. "A little patience!" the Minister urges. However, his optimism is overshadowed by parallel developments, which have an indirect connection with the promised Rail Baltica. The European Union is not giving money to buy diesel trains, and those are barely holding together. The railway electrification project has been canceled. Rail freight is almost non-existent. The pandemic is affecting public finances and forecasts for economic recovery are becoming more cautious. Everyone is sitting at home and stubbornly refusing to procreate. But the debts are increasing. Someday they will have to be repaid.

One can only hope that the scale and impact of the Rail Baltica project on the regions and the whole economy will help the country recover faster.