It would be much fairer to bill 830 thousand euros to Aldis Adamovičs, a Member of the Saeima accused of defrauding 83 euros, as liability for OIK payments to a cogeneration power plant in Preiļi, which was built when A. Adamovičs was the chairman of Preiļi Municipality Council.
29.03.2021. Arnis Kluinis 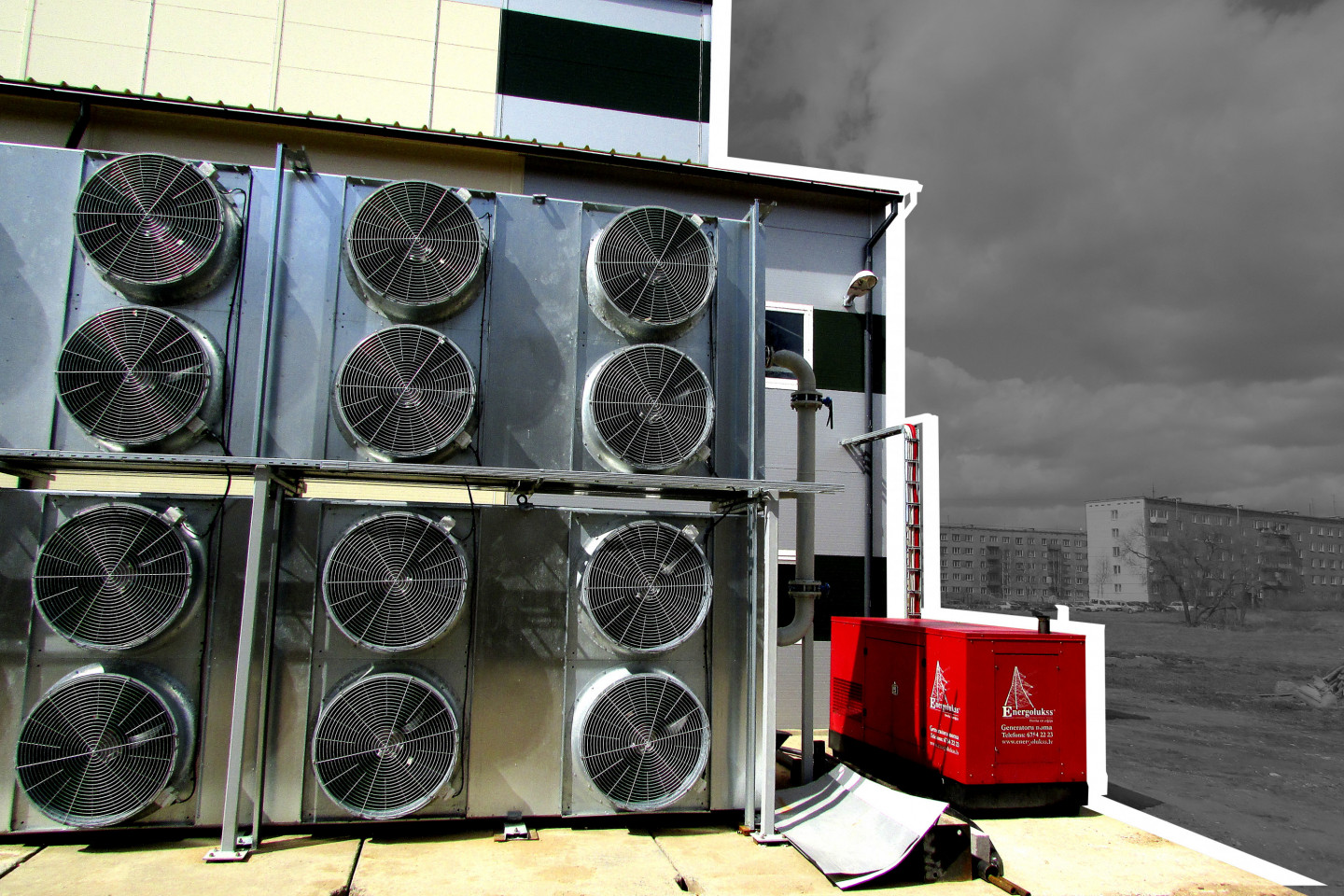 What has been said about A. Adamovičs applies to practically everyone who ran a local government in Latvia between 2008 and 2013. Any of them can become a scapegoat in connection with the 14th Saeima elections. To be elected to the 13th Saeima and join the ruling coalition, it was enough for parties and politicians to promise to abolish the mandatory procurement component (OIK). It is a really scandalous increase in the price of all the electricity available in Latvia to cover the losses caused by the fact that part of the electricity is produced by the wrong methods. The term of office of the 13th Saeima is coming to an end, but the abolition of the OIK has neither taken place nor is expected. Therefore, the politicians of the 13th Saeima need a way to rehabilitate themselves for not abolishing the OIK despite such an obvious breaking of their promises to enter the 14th Saeima. 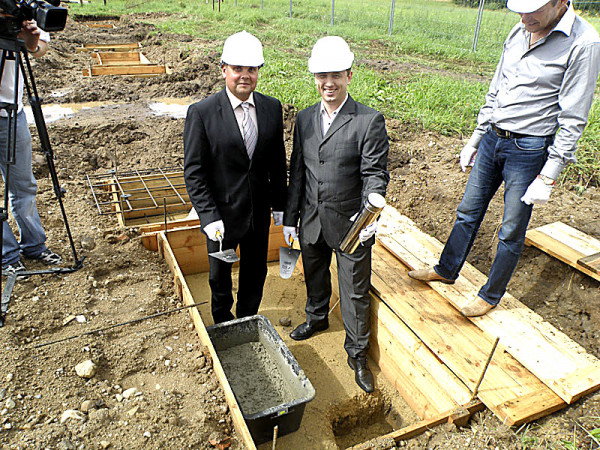 PHOTO REMINDER of how Aldis Adamovičs, chairman of Preiļi Municipality Council, and Ēriks Fricsons, Chairman of the Board of SIA Preiļu siltums, posed at the start and end events of cogeneration plant construction in 2012 and 2013 / Publicitātes foto / Preiļu novada dome 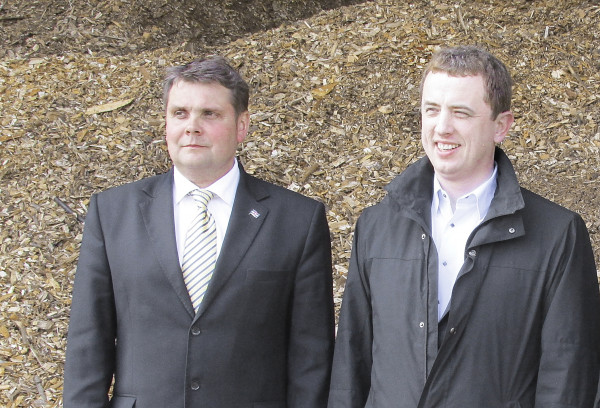 Where and how to find scapegoats

Three precedents point out that punishing local government leaders for participating in the implementation of the OIK is a possible pre-election attraction.

Secondly, the conviction of Aivars Lembergs and the publication of legally binding indictments against Andris Šķēle and Ainārs Šlesers relate to events earlier than the introduction of the OIK. So no one has any hope of statute of limitations if there is the political will to convict, imprison and take away property.

Thirdly, is the specific case with Aldis Adamovičs, the former chairman of the Preiļi Municipality Council and the current deputy of the Saeima, a member of the ruling coalition party New Unity (Jaunā Vienotība). So the state trough really is empty if there is not enough space at it for members of the ruling coalition and the police are hired to remove them. As a result, a criminal case concerning the fraud of transport compensations intended for the deputies of the Saeima in the amount of 83 euros, which the accused denies, has been started and is being considered in court in all seriousness.

In the case of the OIK, local government leaders are indeed to blame. This time, A. Adamovičs has been doubly unlucky. His name in this publication came about by accident. It so happened that in the spring of 2013, the bank that financed the construction of the Preiļi cogeneration plant organized a trip to the opening event of this plant. This is reflected in Neatkarīgā's May 2, 2013 publication "Preiļi will be heated by SIA Seces Koks." The title corresponds to the official version, which had to be supplemented already on May 7 with facts about how "Preiļi is fighting for the right to stoke." Namely, in Preiļi there were too few residential and public buildings connected to the central heating supply to have enough work and money for six boiler houses even in winter. The description of the competition peripeteia of heat producers was followed by the question of what they all will do when idle between heating seasons. In the case of a cogeneration plant, the answer was evident in the huge fans whose job it was to cool the plant, i.e., simply blow the heat produced out in the air. At the same time - the answer on who will maintain the station. Of course, all Latvians, OIK payers - electricity consumers.

If the chips were burned to heat outdoor air only in Preiļi, the whole of Latvia would pay for it without it being noticed. However, the same stations were built in practically all Latvian municipalities or small towns without any industry that would need the heat produced there. As a result, OIK, as a reward for heating Latvian air, made the price of electricity in Latvia at odds with the existence of a competitive industry. Around 2014, it had become absolutely clear. The issuance of new OIK permits was suspended, but the issued permits were not revoked, invoking the principle of the protection of legitimate expectations. It was only very gradually that the public authorities began to acknowledge that they had wrongly relied on the use of cogeneration heat as something so self-evident that it was not discussed and verified. 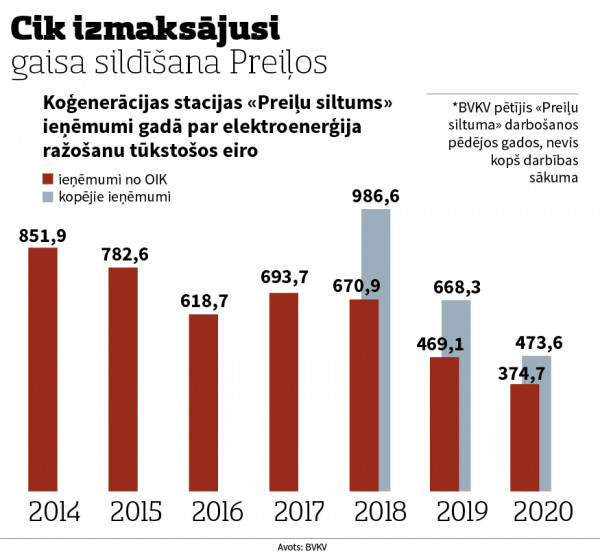 How much did heating the air in Preiļi cost? Annual revenue of cogeneration plant Preiļu siltums for electricity production in thousands of euros. Red - revenue from OIK, Grey - total revenue / Neatkarīgā

Checks on OIK beneficiaries gradually began with cases where the OIK was only a pretext for getting even between politicians and business groups. However, the inspections have gradually picked up the pace and have reached Preiļi. The State Construction Control Bureau is now authorized to carry out inspections. It assured Neatkarīgā that "an inspection report of the Office has been prepared, which indicates the discrepancies found during the inspection (the most significant ones are related to improper accounting of useful heat energy and non-compliance of meters of produced/useful heat energy)."

Further decisions on the exclusion of the cogeneration plant from the OIK scheme are possible. In theory, it would also be possible to recover money unduly paid. The operation of the Preiļi cogeneration plant has so far been financed by the state with 4.5 million euros for heating the air, not counting how much has been paid for the produced electricity according to its market price and how much the company has received for heat supplied to real consumers.

Does not communicate and does not know anything, but fills all the documents

Uldis Bērziņš, the owner of SIA Preiļu siltums, has applied to the Register of Enterprises as a beneficiary of the operation of the cogeneration plant. There are dozens of people in the register data with exactly this name and surname combination. A. Adamovičs states about the specific U. Bērziņš that "I have never met him and I don't know him." There is no obvious evidence against what A. Adamovičs said at the moment, because A. Adamovičs posed together with the then co-owner and chairman of the board of Preiļu siltums Ēriks Fricsons in both the foundation stone laying and start of operations events of the cogeneration station. However, it is difficult to believe what A. Adamovičs said, because the company Preiļu siltums was taken over by U. Bērziņš together with Ē. Fricsons in 2012 - just when the OIK project started. Since then, U. Bērziņš has been a member of the board of Preiļu siltums, whose non-appearance in Preiļi Municipality Council during the construction of the cogeneration plant is unlikely. In 2018, U. Bērziņš became the sole owner and manager of Preiļu siltums, as Ē. Fricsons had found an opportunity to receive even more generous funding for the venture capital fund from the state financial institution Altum.

The decisive moment to hold A. Adamovičs responsible for the operation of Preiļu siltums is his reluctance to answer the question, “were the rules for cogeneration that is eligible for OIK in 2010-2013 really such that they did not require the use of heat?” Instead of such an answer, A. Adamovičs confirms that "neither I nor the future management of Preiļi municipality or the management of SIA Preiļu saimnieks have anything to do with the internal processes of Preiļu siltums or Preiļu enerģētika related to OIK or electricity generation." Such ignorance does not absolve from liability, as the name of the cogeneration plant already includes both electricity and heat production. Perhaps the concept of cogeneration has a longer history in Latvian, but the word for its current use came from "combined heat and power" in English. In the form of a possibility, A. Adamovičs remembers that in order to receive a license for a cogeneration plant, an agreement on the sale of heat might have been necessary. At the time of concluding such an agreement, it would have been impossible not to be interested in the scope of the offer of Preiļu siltums and its suitability for consumption in cold winter and hot summer. It was by no means mandatory for cogeneration heat to be purchased only by the municipality, but the municipality needed to know if anyone else was applying for that heat. There are no such bidders in Preiļi, therefore a brass plate company Preiļu energētika owned by the same U. Bērziņš was used, which bought excess heat from Preiļu siltums to let it dissipate in the air.

Last summer was the first since the start of the cogeneration plant, when it was shut down at least in the summer, so that practically all the heat produced would not have to be released into the air. Such downtime is reflected in the decrease in OIK payments received by Preiļu siltums. It confirms U. Bērziņš's attempt not to challenge fate by demonstratively turning the fans of his power plant at full power. These fans revealed the "internal processes" of cogeneration to any passer-by in the city center, about which A. Adamovičs remained unaware. The difference between the OIK's revenues during the heyday of the scheme and in 2020 shows quantitatively how much energy was previously wasted and how much scammed money has to be recovered from the culprits for operating a plant that does not comply with the meaning of cogeneration.