The UN urges to restore the occupation regime education in Latvia

In its concluding observations on the development of Latvia over a ten-year period, the United Nations Committee on Economic, Social and Cultural Rights recommended the restoration of bilingualism in public education. That is scandalous. The internationally authoritative organization hadn't noticed that the Latvian state was occupied and that the Russian language was introduced as the main one by the Soviet occupation regime, and not by local ethnic minorities.
31.03.2021. Imants Vīksne 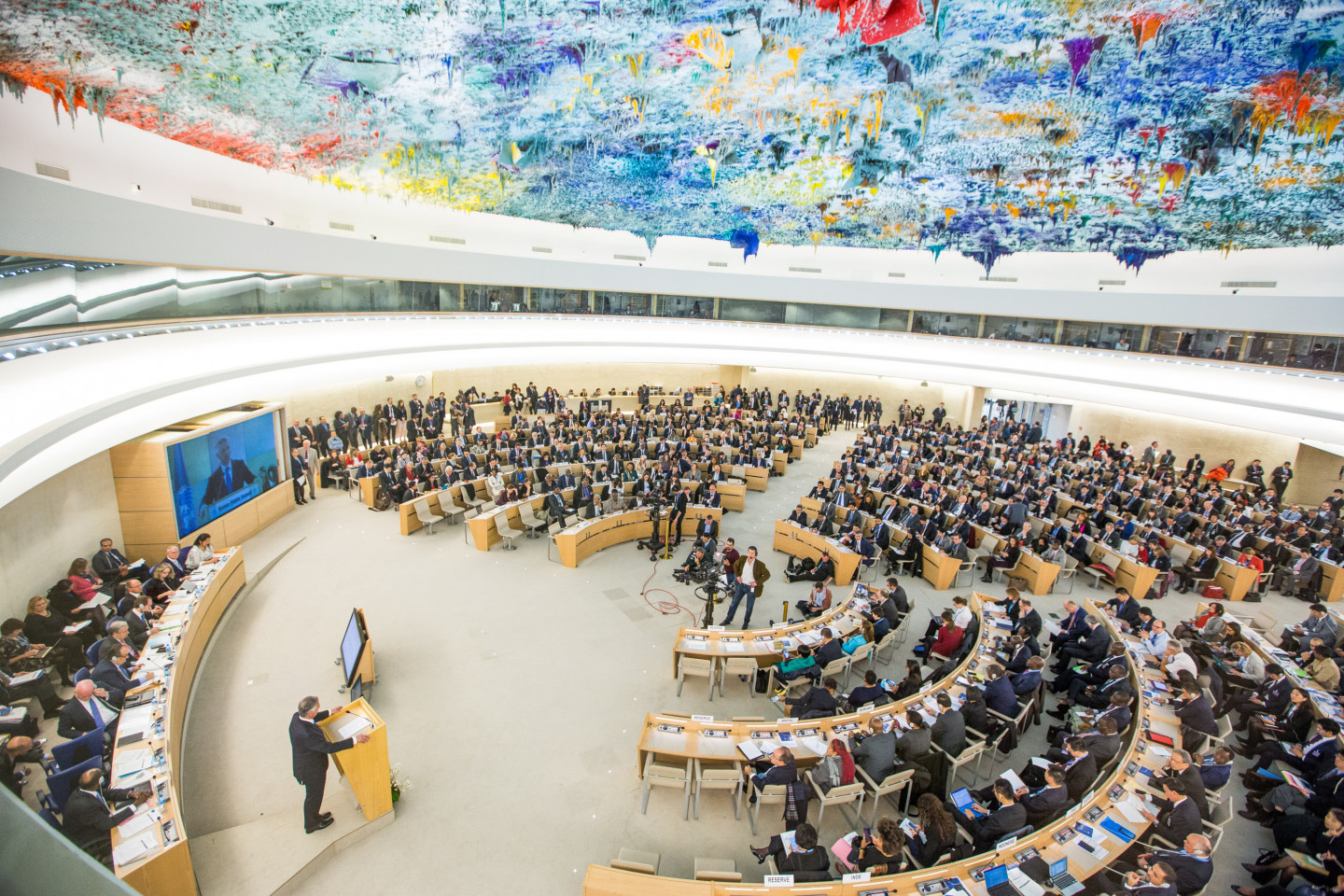 We know nothing about Latvia. But we know what you must do. Yours, UN ©Publicitātes foto

The occupiers came and, along with the main nationality, deported minorities too to Siberia, and introduced bilingualism in the country. In addition, it was one in which the Russian language is dominant, and such an order was introduced in schools. Russians studied separately, and therefore currently 10% of the population in Latvia renounce Latvian citizenship. They enjoy the benefits of Latvia, but refuse to speak the Latvian language, refuse to sing the Latvian anthem and refuse to respect Latvians as the main nationality of Latvia.

Geneva respects the whining of the communists

An important decision on the path to social integration was the transition of general education to take place in the state language. Russian children also have the right to acquire the necessary knowledge in the state language. However, Kremlin agents such as MEP Tatjana Ždanoka and her allies continue to fight against the interests of Latvian society, spread harmful and false information about Latvia in various international organizations, and the statement adopted by the UN committee confirms this. Complaints about discrimination against Russians in Latvia have been submitted by three organizations or interest groups with the following names: "МФПЧ Латвийский комитет по правам человека", "Межрегиональное общественное движение "За демократию и права человека"" and "Информационная группа по преступлениям против личности".

And now people who have no idea about the historical reality of Latvia give advice that the Latvian state, as a member of the organization, must respect. The committee's report is not directly binding, but the implementation of the recommendations will have to be accounted for and the non-implementation will have to be justified. In addition, the reports of international treaty organizations are used domestically, not only by the radical pro-Kremlin wing represented by Tatjana Ždanoka and Nils Ušakovs, but also by the new communists - the Progressives - and their political allies.

On social networks, Selma Teodora Levrence, one of the most influential members of the Progressives, recently published a statement that she does not understand why Russian young people are required to know Latvian in the labor market. That this is discrimination. The tweet was later deleted because it was "too sharply worded". It would be more accurate to say - it prematurely revealed the party's program. It should be recalled that until now Selma Teodora Levrence was responsible for the Progressive's youth movement, as well as for attracting homosexuals to the party electorate. However, it has now been revealed that she is also engaged in attracting Russian audiences by competing or, on the contrary, in cooperation with the Kremlin's influence agent Tatjana Ždanoka.

And the opinion represented by both seems to have been heard louder in Geneva than the Latvian government's explanation of the 50 years of occupation and its consequences.

According to the Ministry of Foreign Affairs, Latvia submitted the report on the implementation of the UN International Covenant on Economic, Social and Cultural Rights in Latvia in 2008-2017 in April 2019. The review of the report took place on February 23-25, 2021, while on March 8, 2021 the Committee on Economic, Social and Cultural Rights published its concluding observations on the Latvian report.

The full text of the recommendations in Latvian will be published in April, when the work on the official translation will be completed. However, the government has invested one and a half million euros in the creation of the translation tool hugo.lv. This gives a fairly close idea of ​​what the document is about in Latvian.

Here is what the United Nations Committee on Economic, Social and Cultural Rights recommends to Latvia:

While noting the information provided by the State party delegation in relation to support provided for the teaching of and in minority languages, the Committee is concerned that current language policies in the State party may have discriminatory impact against persons belonging to minorities in the enjoyment of their economic, social and cultural rights, especially in the fields of education, employment, and access to services. The Committee notes the explanations provided by the State party delegation that the education reform itself is not discriminatory. However, the Committee remains concerned that the recent amendments to the Education Law and the Cabinet Regulation No. 716 of 21 November 2018 have discriminatory effect on minority groups and that they create undue restrictions on teaching of and in minority languages in preschool and primary education in both public and private schools (art. 15).

The Committee recommends that the State party take measures to ensure that its language policies and laws do not create direct or indirect discrimination against persons belonging to minority groups in the enjoyment of their economic, social and cultural rights, and that they do not impede the ability of these persons to find employment in public and private sectors.

It also recommends that the State party consider revising its language policies and laws in education in order to promote the teaching of and teaching in minority languages and to ensure that they do not affect negatively the educational performance of children belonging to minority groups."

In short, bilingualism must be restored in Latvian education.

Recommendation with the power of an order

Depending on whether the decisions taken are favorable or unfavorable, the United Nations is often called an influential or, on the contrary, incapable organization. In this case, the adopted document is harmful to Latvia's interests, and it would be useful to ignore it or declare it an error caused by a lack of understanding.

Neatkarīgā asked the Ministry of Foreign Affairs to what extent the statement of such a UN body to the Republic of Latvia is binding. The answer is not pleasing - the content is recommendatory, but it cannot be ignored:

“The concluding observations of the Committee on Economic, Social and Cultural Rights are of a recommendatory nature, however, these recommendations are taken into account when developing the regulatory framework and legal policy planning documents. Thus, for example, the obligations arising for Latvia from the UN Covenant on Economic, Social and Cultural Rights are referred to in Title V “Other International Obligations” of the draft legislation, thus necessitating an assessment of the compliance of the legislation not only with the Convention but also with the Committee's recommendations on Latvia."

After four years on the carpet

Of course, if pro-Kremlin comrades come to power - comrade Ždanoka in combination with comrade Selma Teodora Levrence - these recommendations will certainly be used to return Latvia to bilingualism. And probably not only in schools. Like the idea of voting rights for non-citizens. For those who want to see the Soviet Union or at least the Russian Federation instead of Latvia. Such a course of events would be very dangerous for the Latvian nation.

What will happen next, after the recommendations of the UN Committee? Within two years, at the request of the Committee, Latvia will provide additional information on progress in the field of climate, poverty eradication and health care measures to combat Covid-19. Nothing additional is required about discrimination against minorities. Everything about that is clear in Geneva. According to the Committee's instructions, the next report should be prepared and submitted by Latvia by 2026.

It will be necessary to report on the progress of the introduction of bilingualism in Latvia.

Comment
Latvian band Singapūras satīns falls under the blade of lynching culture
BLBens Latkovskis
A small victory for the freedom of speech
Imants Vīksne
Riga Regional Court has no information that proceedings against Rudolfs Meroni were terminated
Uldis Dreiblats, Ritums Rozenbergs
The environmental poisoning experiment is over
Imants Vīksne
Pubs can breathe a sigh of relief. But what about the children?
MKMāris Krautmanis
Criminal Law might be changed to threaten free speech in Latvia
Imants Vīksne