"Thank you to the Latvian intellectuals and cultural workers for supporting the universal humanitarian initiative," Aik Karapetian, a Latvian film director of Armenian origin, wrote on his Facebook account.
01.04.2021. NNeatkarīgā 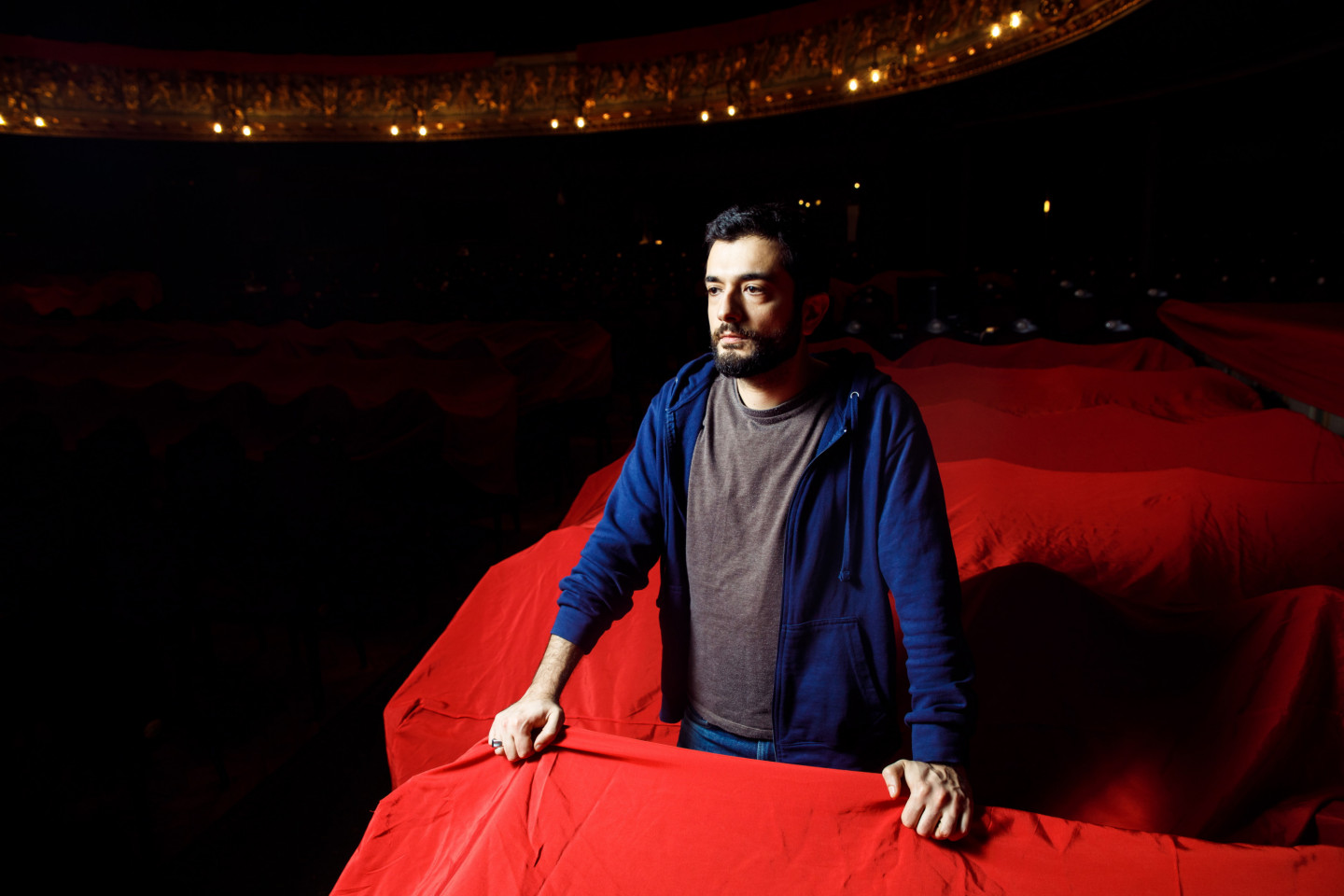 Aik Karapetian, a well-known film director in Latvia and abroad of Armenian origin, would like to thank the 53 representatives of the Latvian intellectuals who signed the letter of support. It calls on the Azerbaijani authorities to release the captive Armenians ©Dmitrijs SUĻŽICS, F64 Photo Agency

As the Latvian Ministry of Foreign Affairs refrains from taking active steps on the issue of releasing more than 200 Armenians from captivity in Azerbaijan, 53 representatives of the Latvian intellectuals signed such a letter of support for Armenians. 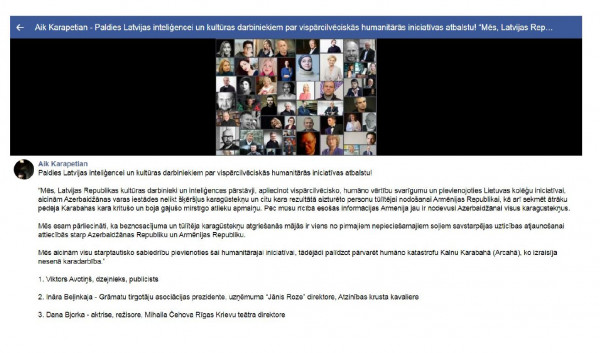 "We, the cultural workers and representatives of the intellectuals of the Republic of Latvia, reaffirming the importance of universal humanitarian values and joining the initiative of Lithuanian colleagues, call on the Azerbaijani authorities not to obstruct the immediate transfer of prisoners of war and other detainees to the Republic of Armenia; and to facilitate the faster exchange of remains of those who died in the last Karabakh war. According to our information, Armenia has already handed over all prisoners of war to Azerbaijan. We are convinced that the unconditional and immediate return of prisoners of war to their homes is one of the first necessary steps in restoring mutual trust in relations between the Republic of Armenia and the Republic of Azerbaijan. We call on the entire international community to join this humanitarian initiative in helping to overcome the humanitarian catastrophe in Nagorno-Karabakh (Artsakh) caused by the recent hostilities." 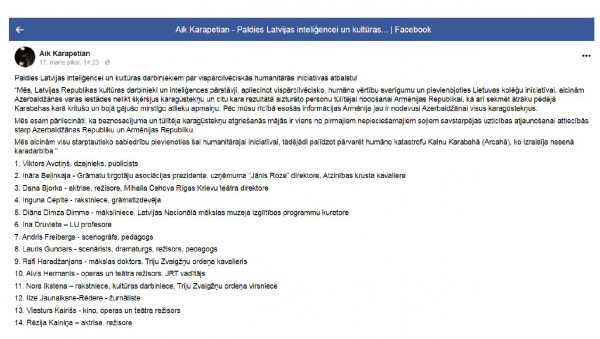 A.Karapetian has publicly stated that "this letter is not political, it is about the two countries establishing normal relations, and to achieve this, steps must be taken". He emphasized that there were many Armenian prisoners on the Azerbaijani side, as well as the remains of those who had not been returned to their relatives for proper burial. "Many relatives, mothers whose children disappeared, hope that they have gotten lost and are among the prisoners. It must be understood that when two small countries are in conflict, the big powers always decide in their place what will happen. There would be no war without the involvement of Russia or Turkey. That's why Armenians around the world tried to attract international attention to stop it. The main thing is for people to stop killing each other! That is the most important thing,” said A. Karapetian publicly.

Prior to the letters of support from the Latvian and Lithuanian intellectuals, a call for the release of Armenian prisoners of war was issued by the Armenian National Committee of America in early March. It welcomed the initiative of the US Congressional Armenian Caucus to push a draft resolution in Congress calling on Azerbaijan to immediately release more than 200 Armenian prisoners of war and civilians held captive following the November 9, 2020 ceasefire agreement between Armenia and Azerbaijan. The latest document signed by the US House of Representatives Congressmen Adam Schiff, Gus Bilirakis, Jackie Speier, David Valadao and Frank Pallone mentions intolerance towards the Armenians in captivity in Azerbaijan.

The Latvian Armenian Cultural Center has been operating in Latvia since 2008. It unites Armenians living in Latvia and supporters of Armenian culture.

A. Karapetian (Հայկ Կարապետյան) is known in Latvia as a film director. His short film Double Life won 2nd place at the Bavarian Television International Film University Festival in 2007. In 2017, L'Étrange premiered his film Firstborn in Paris. A. Karapetian has produced operas The Barber of Seville and Faust at the Latvian National Opera, has staged William Shakespeare's play The Merchant of Venice at the Latvian National Theater.

Latvian band Singapūras satīns falls under the blade of lynching culture
BLBens Latkovskis
A small victory for the freedom of speech
Imants Vīksne
Riga Regional Court has no information that proceedings against Rudolfs Meroni were terminated
Uldis Dreiblats, Ritums Rozenbergs
The environmental poisoning experiment is over
Imants Vīksne
Pubs can breathe a sigh of relief. But what about the children?
MKMāris Krautmanis
Criminal Law might be changed to threaten free speech in Latvia
Imants Vīksne