"The court has not received any information from the State Police about the termination of the criminal proceedings against R. Meroni," Judge Irīna Jansone, Chairman of the Chamber of Criminal Cases of the Riga Regional Court, answered Neatkarīgā's questions.
11.05.2021. Uldis Dreiblats, Ritums Rozenbergs 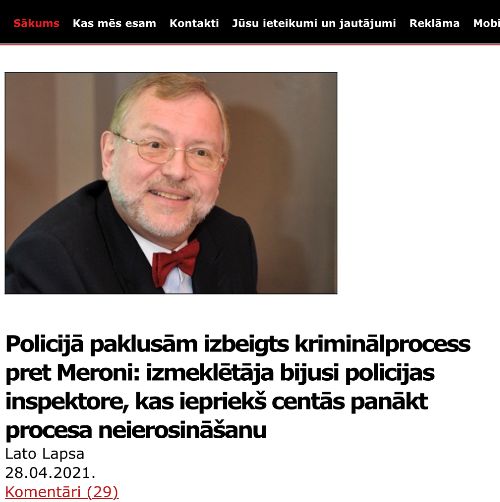 SOMETIMES JOURNALISTS CAN ACHIEVE SUCH THINGS! Through journalist Lato Lapsa's perseverance (it was by no means easy, which can be read in this publication on Pietiek.com) it was achieved that the State Police initiated criminal proceedings against Rudolfs Meroni for an obvious criminal offense. However, this criminal proceeding has now been quietly terminated ©Ekrānšāviņš no pietiek.com

Two weeks ago, the Pietiek.com portal and other media reported that the criminal lawsuit against the Swiss lawyer Rudolfs Meroni, which had been initiated at the request of journalist Lato Lapsa, had been terminated by the Organized Crime Division of the State Police.

Maybe the status will be restored?

It should be recalled that Rudolfs Meroni, a Swiss lawyer (previously an attorney), was officially a custodian of the seized property in the so-called Lembergs criminal proceedings for almost 13 years, from 17 December 2007 to 17 August 2020.

will the Chamber of Criminal Cases under your leadership now restore R. Meroni as the custodian of the seized property?"

Neatkarīgā also asked "whether the Criminal Chamber will request a report from R. Meroni on the condition of the property."

The decision cannot be changed

Namely, I. Jansone pointed out that "Criminal proceeding No.12812001408 /the so-called Lembergs case - auth./ has been finalized in the court of first instance, the summary decision has been drawn up and a full decision is currently being prepared, during which no other procedural steps related to the trial of the case can take place. Persons involved in the proceedings of a court shall have the right to appeal to a court of appeal."

What was the criminal proceeding of R. Meroni about?

Namely, the annual report of JSC Latvijas naftas tranzīts, which was submitted to the Register of Enterprises with several years delay, indicates that a certain number of shares of JSC Ventbunkers, JSC Kālija parks and JSC Ventspils tirdzniecības osta have been pledged in favor of this company. It could be calculated purely mathematically that the shares in respect of which the "rights of the beneficial owners" were seized were also pledged.

Specifically, it could be calculated that JSC Ventbunkers pledged 94.7% of shares, JSC Kālija parks - 87.7% of shares and JSC Ventspils tirdzniecības osta - 92.8% of shares.

This, in turn, clearly meant that the seized property was pledged as well,

But the prosecutor's decision to seize the property clearly and unequivocally states: "Along with the seizure of the property, its owner, possessor, user or holder is prohibited from wasting it in any way (deliberately reducing the value), altering, alienating (issuing, transferring, lending, donating, selling or in any other way) or pledging."

Will journalists be allowed to read the materials?

Given that the violation seems to be obvious, it is important to find out the motivation why the criminal proceedings were terminated.

Therefore, Neatkarīgā asked Viktorija Opincāne, Chief Prosecutor of the Pre-Trial Investigation Supervision Division of the Criminal Law Department of the General Prosecutor's Office, to provide us with a copy of the decision and to permit us to get acquainted with the materials of the terminated criminal proceedings.

A reply was received from Monvīds Zelčs, the Prosecutor of the Anti-Corruption Coordination Division (previously did not exist) of the Criminal Law Department, that Neatkarīgā's application was forwarded "according to the jurisdiction" to the Organized Crime Board of the Main Criminal Police Department of the State Police.