The court did not write the judgment, it simply copy-pasted from the accusation

The summary decision in the so-called Lembergs case in several sections is simply a word-for-word, comma-for-comma copy-pasted accusation - with the same grammatical errors and mistakes.
14.05.2021. Uldis Dreiblats, Ritums Rozenbergs 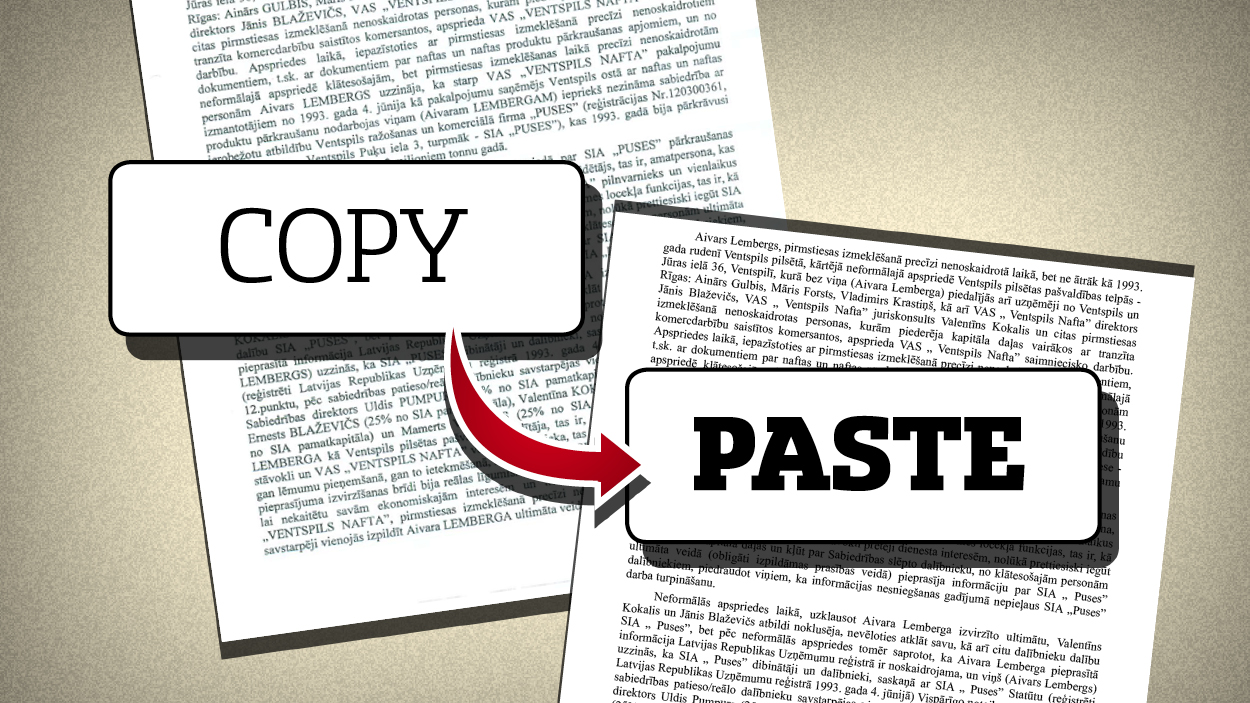 Consequently, it can be concluded that the composition of the court hearing the case (Chairperson of the Chamber of Criminal Cases Irīna Jansone, judges Ligita Kuzmane and Ārija Ždanova) is not the author of the judgment in these sections.

But then the question has to be asked: why did it take more than 12 years of very intensive litigation in this case; why, for example, was it necessary to interrogate the victim millionaire Valentīns Kokalis for several months, during which he told such contradictions that no accusation was possible anymore; why was it necessary to have a defense debate speech for months if the court did not even listen to it? 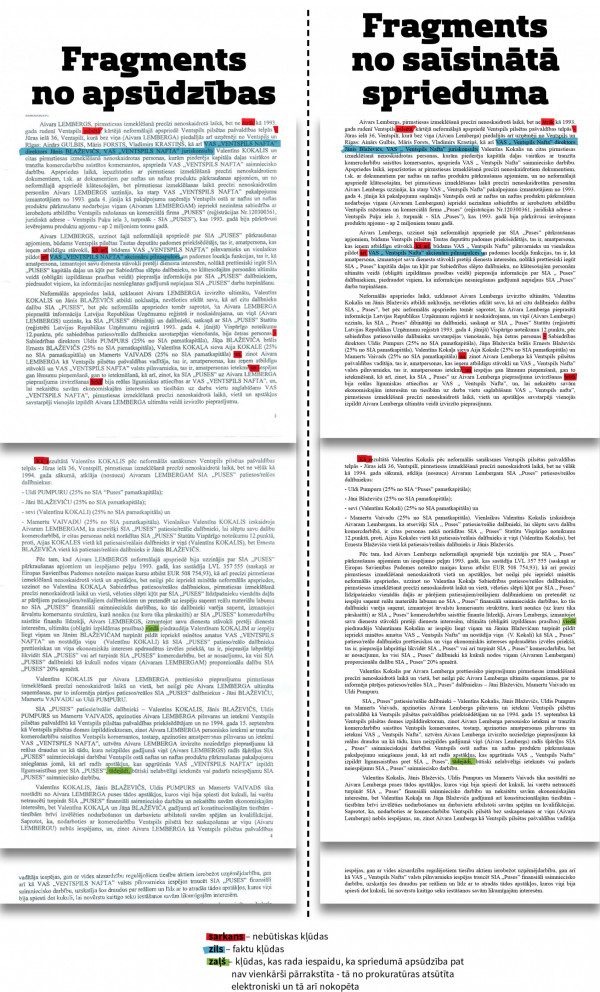 The court could have just copied the text of the accusation and passed it as a court judgment already in the autumn of 2008!

As you know, the court of first instance convicted A. Lembergs for extorting capital shares and stocks in 1993-1995 from influential people of that time; for failing to declare the shares and stocks in a number of companies owned by him (in the opinion of prosecutors and the court), but cleared in the most serious allegations - of all the decisions taken as a public official.

The legal status of the company as a litmus test

Neatkarīgā compared the texts of the summary decision and the accusation in the criminal case episode about extortion of the shares of SIA Puses “not quicker than in the autumn of 1993” from Valentīns Kokalis (for more details see the May 10 publication “The court declares a conflict of interest to be lawful").

In general, the summary decision in the Lembergs case is 455 pages long, so a full analysis would be a very serious and time-consuming task.

But in the episode about the extortion of the shares of SIA Puses, the court has really simply copied the text of the accusation, without analyzing deeper all the absurdities written in this accusation.

In fact, there were no such positions in the state joint-stock company at all! These gentlemen held such positions in the state-owned company Ventspils nafta, and this is a completely different period of time, and it is by no means "not earlier than in the autumn of 1993". Among other things, those who know the language will understand that here both prosecutors and the court should have used "not earlier than", because it is a matter of time, not speed.

But on September 21, 1993 (in the autumn) the government decided that Ventspils nafta should be transformed into a state joint-stock company and J. Blažēvičs became the president, and V. Kokalis - a member of the board.

In fact, in the autumn of 1993, on the recommendation of A. Lembergs (!), both gentlemen were appointed to these high positions at the general meeting of state trustees (shareholder meeting). The chief state trustee Minister of Finance Uldis Osis, and the state trustees State Secretary of the Ministry of Economics Aina Bataraga, State Secretary of the Ministry of Transport Uldis Pētersons, and Chairman of the Ventspils People's Council of Deputies A. Lembergs took part in it.

Thus, there were four state trustees, and according to the Articles of Association of SJSC Ventspils nafta, the general meeting of shareholders was valid only if at least 3 trustees participated. Nevertheless, prosecutors wrote in the indictment that A. Lembergs has performed the “functions of the general meeting of shareholders”, while the court repeats this nonsense word for word!

Respectively - the “functions” of the general meeting of shareholders of SJSC Ventspils nafta could be performed only if at least 3 state trustees of this company met (moreover, it had to take place in accordance with the law), and not A. Lembergs alone decided something.

All of these are very important facts in order to understand at all what period of time the accusation is about, as well as to be able to assess how true, at least in theory, the version of the extortion of shares from V. Kokalis “not quicker than in the autumn of 1993” could be, and how A. Lembergs in this “not-quick autumn of 1993” could have endangered the “constitutional right” of V. Kokalis and J. Blažēvičs to hold positions in SJSC Ventspils nafta, which was the “weapon” with which A. Lembergs could extort the shares out of them.

Again, who was more influential?

Another important fact is that Ventspils nafta was first transformed into a state joint-stock company on June 17, 1993, and it was in this status for about a month when it became a state-owned company again.

This fact is important because in the above-mentioned summer month of 1993 A. Lembergs was appointed a member of the Board of SJSC Ventspils nafta, therefore it was impossible for him not to know to which companies SJSC Ventspils nafta provides services.

Consequently, the allegation that "not quicker than in the autumn of 1993" A. Lembergs suddenly learned that SIA Puses had become a customer of SJSC Ventspils nafta and that this company had transshipped large volumes of oil is simply made up!