The judgment of the court of the first instance in Lembergs criminal case has been appealed by the lawyers of all the accused, two victims, the owner of the damaged property; a protest has also been filed by the public prosecutors – shows the information received from the Riga Regional Court.
19.07.2021. Uldis Dreiblats, Ritums Rozenbergs 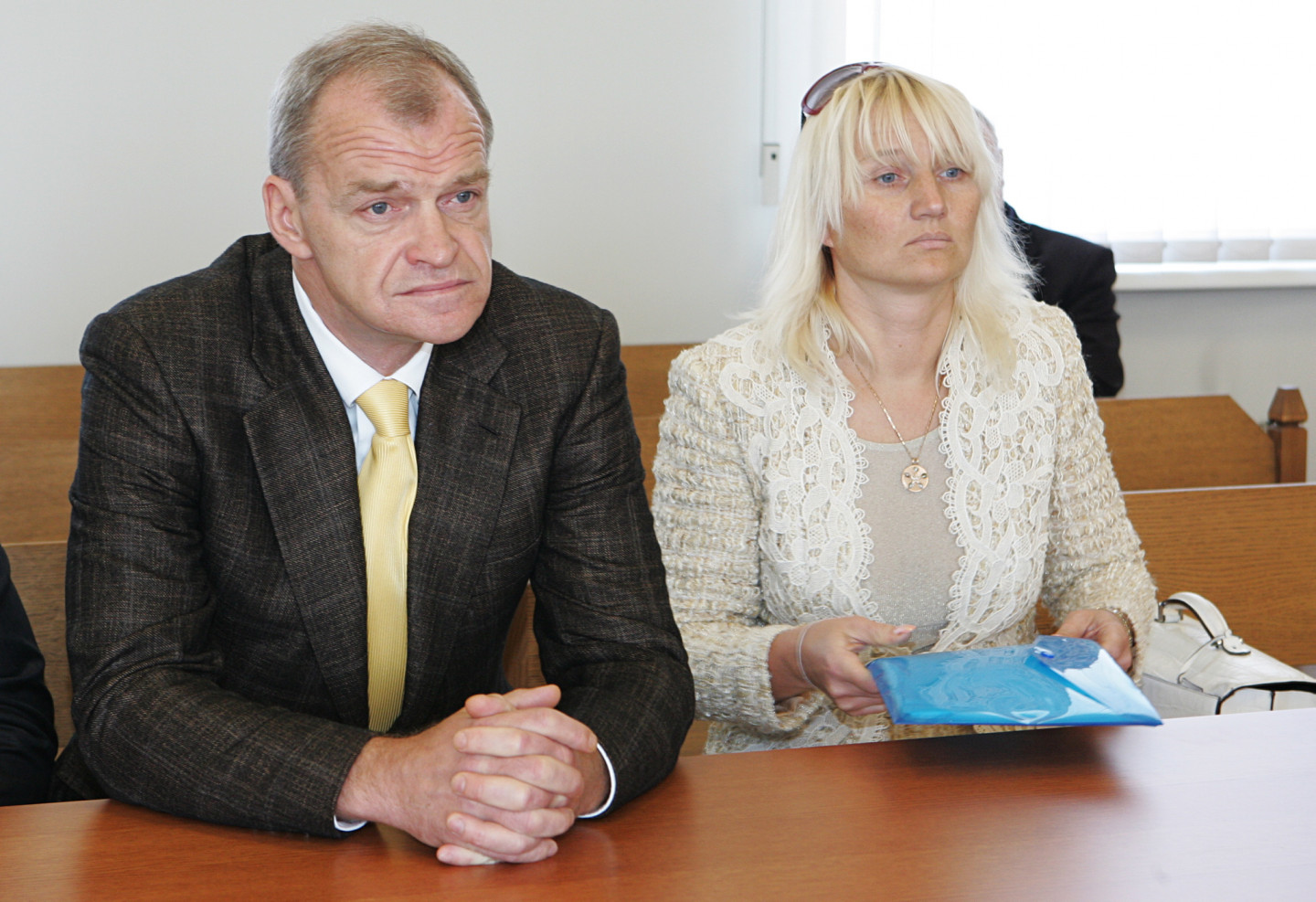 THE VICTIM MILLIONAIRE AINĀRS GULBIS (pictured together with his and SIA Man-Tess' representative in the criminal proceedings, former judge Ineta Malahovska) has also appealed the judgment in the Lembergs criminal case ©F64

July 12 was the deadline for appealing the 1920-page verdict in the Lembergs criminal case. This right has been exercised by most of the participants in this criminal proceeding.

As the Riga Regional Court emphasized in its response to Neatkarīgā, appeals and protests have only been received, but they have not yet been accepted for consideration. This means that it will probably take a long time before the appeal process starts.

Raimonds Ločmelis, assistant to the President of the Riga Regional Court in matters of public relations, was asked by Neatkarīgā whether the prosecutors have filed a protest in full or only regarding part of the judgment in the Lembergs criminal case; whether all defendants have lodged an appeal; whether the appeal has also been lodged separately by the accused's lawyers; which of the victims has submitted a complaint - only Ainārs Gulbis or someone else as well; who else has lodged a complaint out of those involved in the criminal proceedings; whether the law determines how long the court must decide on the acceptance of the appeal and protest; when could the court decide to which court of appeal to send the case if the complaints and protests are admissible?

The following answer was received from the Riga Regional Court to the above questions: “On the judgment of the court of the first instance in criminal case No. 12812001408 the panel of the Criminal Court of the Riga Regional Court has received an appeal protest from the Prosecutor's Office, as well as appeals from the following participants in the proceedings: accused Aivars Lembergs, his lawyers Māris Grudulis, Olga Hincenberga and Irina Kauke; from the accused Ansis Sormulis' defense counsel Jānis Rozenbergs, from the accused Anrijs Lembergs' defense counsel Oskars Rode, from the owner of the property damaged in the criminal proceedings Līga Lemberga, from the victim Ainārs Gulbis and from SIA Pars termināls, who was recognized as a victim in the criminal case. The Court emphasizes that no complaint has yet been accepted. The answer to the first two questions is that no information can be given from the court on the content of the appeal protest, which is part of the criminal file. The answer to the third question is negative: appeals have not yet been received from all the accused, but there is still time until next week."

As the content of the appeals is not known, only plausible assumptions can be made about what is being appealed.

There is no doubt that all the accused consider the judgment at first instance to be unfair and therefore appeal it in all episodes in which they have been convicted.

Given that the convicting episodes in the judgment were simply rewritten or even copied from the accusations written by the prosecutors, it would be strange if the prosecutors had lodged an appeal against this. Thus, most likely, the appeal protest has been submitted for the episodes in which Aivars Lembergs was acquitted of the decisions made in the Ventspils City Council and the Ventspils Freeport Board.

A.Lembergs was acquitted for using official position in bad faith for the purpose of acquiring property (Section 318 (2) of the CL) in 4 episodes and for violation of restrictions imposed on a public official (Section 325 (2) of the CL) in 38 episodes, i.e., in most of the accusations.

Līga Lemberga, the owner of the damaged property, probably appeals the verdict because her testimony, her submissions and what her representative said in the debate that the famous "seized property" deposited with Rudolfs Meroni belong not to the legally incomprehensible "Lembergs family" but to specific persons - half to Līga Lemberga and half to Anrijs Lembergs.

Among other things, more experienced political observers will probably remember that at the end of the 1990s, there was a great deal in the media that Ventspils Mayor Aivars Lembergs had given his property to his children.

It is plausible to assume that the victim SIA Pars termināls (formerly SIA Man-Tess) has appealed against the judgment since the court of the first instance completely ignored the repeated arguments and requests of this company's representative that there was no suffering and SIA Man-Tess has been a fictitious victim in this criminal case. Consequently, at least in the section on extortion of shares from SIA Man-Tess, the court should make an acquittal judgment.

To be precise, let us quote the last sentence of the victim's representative in the debate:

"In view of the above, in the part about SIA Man-Tess (later - SIA T2 Terminal and now - SIA Pars Termināls), I ask the court to make an acquittal decision.”

On the other hand, the millionaire Ainārs Gulbis, who has been recognized as a victim, probably has completely opposite arguments to appeal against the judgment.

Namely, A. Gulbis claimed material compensation in the amount of more than EUR 10 million and moral compensation of EUR 7,500,000,000 for the suffering he had suffered from A. Lembergs in 1993-1995, which he did not really remember until the beginning of 2008.

The court granted his application for pecuniary compensation in part, setting the compensation at EUR 22,156 and 96 cents. The moral compensation of 7.5 billion, on the other hand, was rejected in its entirety.

Consequently, A. Gulbis can claim 340,000 times (!) less money than he wanted, and this is a convincing reason to appeal against such a judgment.

Not evaluating in essence

Here is an excerpt from the judgment of the Riga Regional Court, why A. Gulbis' application that his moral suffering should be compensated with an adequate amount of money was rejected.

Based on the case law of the Supreme Court of the Republic of Latvia on compensation for moral damages in criminal proceedings 2010/2011, the court panel points out that moral damage cannot be compensated if, at the time of committing the criminal offense Section 1635 of the Civil Law as of January 26, 2006, was not in force, where it is stipulated that any infringement of rights, that is, any unauthorized act which has resulted in damage (including moral damages), entitles the victim to seek satisfaction from the injured party, insofar as he or she can be blamed for this act. The norms of Chapter 26 of the Criminal Procedure Law, where the compensation to the victim for moral damages is determined, are also not applicable, because these norms are of the nature of substantive rights and they were not in force at the time of committing the criminal offense. In accordance with Section 3 of the Civil Law, each civil law relationship shall be negotiated in accordance with the laws that were in force when this relationship arose, changed or terminated.

Since the criminal offense of Aivars Lembergs against Ainārs Gulbis was committed in the period from the beginning of 1994 to May 11, 1995, when the norms of Chapter 26 of the Criminal Procedure Law and Section 1635 of the Civil Law in the wording of January 26, 2006, were not yet in force, the above provisions of the law are not applicable.

In view of the above, the panel of judges considers that there is no legal basis to compensate the victim Ainārs Gulbis for moral damages.

[2694] Although the victim Ainārs Gulbis and his representative at the court hearing maintained the compensation for damage claimed by the victim Ainārs Gulbis during the pre-trial investigation for Aivars Lembergs extorting the 185 shares of SIA Lat Transnafta owned by JSC SWH Riga Zürich AG as a bribe (2.2% of the total number of shares) in the amount of LVL 18,500 or EUR 26,323.13 (Volume 42, p. 75), the court considers that this application for damages should be rejected, as the accused Aivars Lembergs has not been charged with SIA Lat Transnafta extortion of 185 shares as a bribe from Ainārs Gulbis.