The number of Latvians abroad has grown

During the first Covid year, the number of Latvian nationals living abroad has increased from 203.9 thousand to 210.9 thousand.
07.08.2021. Arnis Kluinis 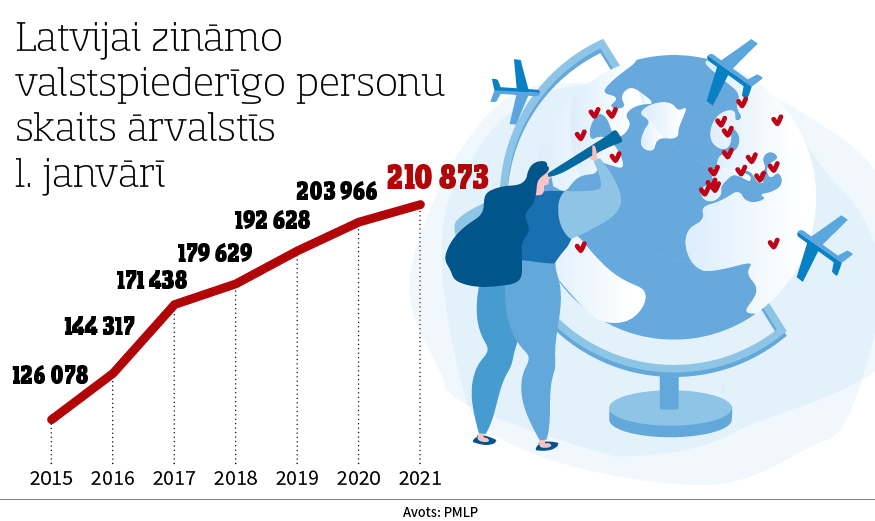 Number of persons abroad known to Latvia on January 1 ©Neatkarīgā

The Office of Citizenship and Migration Affairs (OCMA) has completed calculations on the number of legally noted people moving away from Latvia or to Latvia by the beginning of this year. Thus, a comparison between January 1, 2020, and January 1, 2021, is obtained. The emigration balance recorded last year is the lowest in many years. Such a decrease can be explained with equal credibility both by the difficulties caused by Covid-19 to cross national borders and by a steady downward trend since 2018 when all borders were open.

This is all the better because more people abroad have submitted their foreign address to Latvia, rather than disappeared without a trace. If they communicate with the Latvian state at least at the address submission level, then they are more likely to keep remigration in mind.

Remigration is one of the few points in the assessment of which the opinion of the people and the official policy of the state, the allocation of the state financial resources, more often coincide than not. Remigration is generally accepted as desirable, despite the fact that in the space of electronic expressions there are also accusations against “traitors to the homeland”, etc.

The fact of submitting a foreign address is not absolute proof of people's future intentions, let alone how those intentions will be realized. It is also possible that a person does not submit their departure to return to Latvia after twenty years and live as if they had never left.

A comparison of the data of the OCMA and the Central Statistical Bureau reveals a huge discrepancy between the actual and documented movement of people across the Latvian border with the aim of being on this or that side of the border for a long time. Namely, in the period from 2016 to the time when the data shown by both institutions end, the CSB shows two or three times lower emigration balance.

The discrepancy can be convincingly explained by a lag of almost ten years. According to statistics, more than 20 thousand people left Latvia not in 2016, but in 2008. This was followed by another two years with an emigration balance of over minus thirty thousand people. Only after people had already found places to settle down in their new home countries could they decorate and beautify their surroundings, not just in the literal sense of the word. They had the opportunity to determine the desired intensity of contacts with the local Latvian community, with those staying in Latvia and with the Latvian state.

The Latvian state tries to remind Latvians living abroad about itself by maintaining contacts with Latvian foreign communities, sometimes funding the activities of these communities, sending artists and other notable people to them. Latvian citizens living abroad are a reservoir of election votes for Latvian politicians, at least some of whom go on campaign trips abroad before the elections. Electronic means of communication also play a role, which allows them to submit their foreign address to the OCMA electronically at any time - by reading this article and activating the addresses in https://latvija.lv/lv/Epakalpojumi/EP26/Apraksts or https://latvija.lv/lv/Epakalpojumi/EP15/Apraksts Then, however, authorization with an electronic signature or customer recognition tools of Latvian commercial banks will be required. The traditional possibilities also remain - to submit an address in person at the OCMA or at the Latvian diplomatic and consular missions abroad, or by sending a confirmation of the address on paper by post.

The number of addresses registered abroad might be even higher, as the number of people who have left Latvia in recent decades is estimated at around 300 thousand people. If the number of children probably born to them were added, then up to 400 thousand people abroad could be entered in the database, which has just been renamed the Latvian Register of Natural Persons, i.e., twice as much as is now recorded. In general, there are more than half a million people in the world who have previously lived in Latvia, but this does not automatically mean they feel a connection with the Republic of Latvia.

However, there is no great hope for many more emigrants living abroad applying to Latvia. According to a survey conducted by the Diaspora and Migration Research Center of the University of Latvia, 26% of respondents attended concerts or other events organized directly for people of Latvian origin during the year (meaning, before the year of Covid) and as many indicated somewhat regular participation in Latvian social networking groups. 18% consider themselves members of a Latvian organization, 10% have chosen Latvians for any joint activities in general, but 8% participate in Latvian choirs, dance groups or any other activities related to Latvianness. Of course, these figures can't be summed up, but rather include each other.

The survey data confirm the readiness of people to assimilate in their new home countries, regardless of the fact that they could still be found by the addresses known to the OCMA or other emigrants. People who are even more isolated from Latvia were inaccessible to sociologists.