During the pandemic, people's belief in a healthy lifestyle is growing, but at the same time, more and more people have unhealthy habits. Men have started to drink and smoke more often during the pandemic, while women are have been excessively eating, according to the Health Index of Mana aptieka & Apotheka.
24.07.2021. Inga Paparde 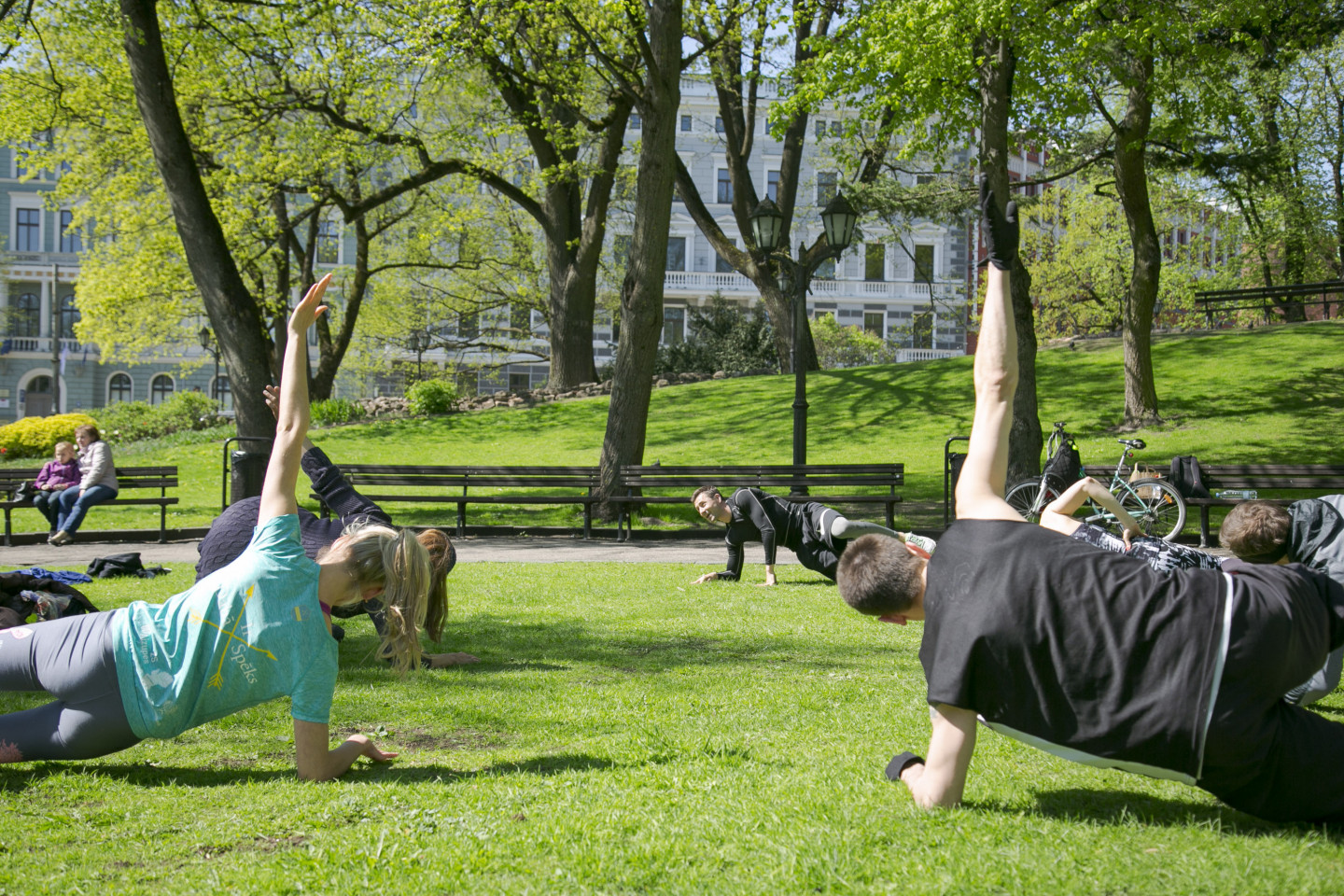 A HEALTHY lifestyle is something one-third of the Latvian population tries to do - exercise at least twice a week, devote enough time to sleep, drink more water and eat healthily. During the pandemic, however, the number of such people has decreased ©Dāvis ŪLANDS, F64 Photo Agency

To find out how people lived during the Covid-19 pandemic, the Health Index looked at people's health self-evaluation, emotional well-being and treatment habits. The annual self-assessment of the health status of the Latvian population also allows comparing the situation over the last six years. This year's index reveals a number of interesting and significant trends - both positive and negative.

The proportion of the population who rate their lifestyle as healthy has increased over the past year, and a total of 65 percent of those surveyed think so. However, one in three people think they have an unhealthy lifestyle. Women aged 18 to 34 with higher education are more likely to consider their lifestyle to be healthy, and in general, women more often than men evaluate their lifestyle as healthy, says Jānis Kūliņš, a Member of the Board of Apotheka, about the results of the study. Although more people think that their lifestyle is healthy, the majority - 62 percent of respondents - still say that they do not do enough physical activities, and compared to last year's Health Index, people are more critical of their physical activities and conclude that it is not enough.

The Health Index also shows a negative trend, with more and more people having unhealthy habits.

In total, 74 percent of respondents have at least one unhealthy habit, and the number of these people has increased by four percentage points in the last year.

Comparing the data over six years, it can be concluded that the proportion of the population, of which unhealthy habits are now a part of their lifestyle, has increased by a third.

Over the past year, the number of both alcohol users (seven percent of respondents have admitted to drinking alcohol excessively) and smokers (27 percent regularly smoke) has increased. 24 percent admit that they do not get enough sleep, 21 percent eat unhealthily, and 17 percent eat sweets excessively. The only unhealthy habit that has slightly decreased is unhealthy eating. Excessive use of the virtual environment and frequent overeating have increased over the past year. "Many of these unhealthy habits are, in our view, closely linked to the effects of the pandemic. Remote work at home could be one of the reasons that promotes these habits - excessive eating, excessive use of the virtual environment, also smoking and excessive alcohol consumption,” comments J. Kūliņš. Comparing the data by gender, 82 percent of men admit that they are more likely to smoke and use alcohol excessively among their harmful habits, while 66 percent of women admit to excessive eating. 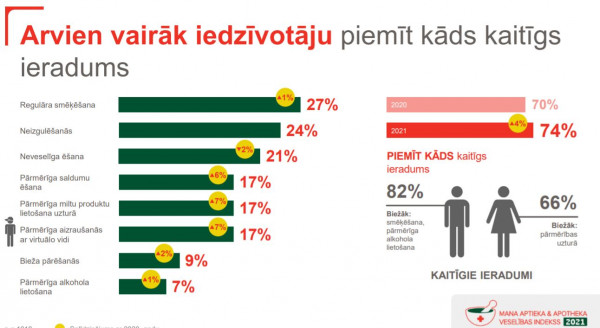 More and more people have some unhealthy habits

The pandemic has allowed more alcohol to be consumed

Experts also point out that the data of the study should be evaluated from the point of view of people's emotional well-being and desires, or, conversely, the unwillingness to disclose data about their harmful habits, as well as what people consider excessive, such as alcohol consumption. However, in general, experts believe that the pandemic has "allowed" people to turn to unhealthy habits. Commenting on the index data, GP Ilze Skuja says that remote work has also promoted alcohol use during work hours, which is also agreed by psychotherapist Artūrs Miksons: “The question is when a person evaluates or notices that this habit is already harmful. A person notices this when this habit has changed something in the person himself, in his life. For us as doctors, this habit may show these negative changes sooner, for example, in blood tests, but for a person - yes, my weight has increased a bit, I drink more glasses of alcohol a day, but my work, my relationships have not yet changed radically. As soon as a person notices the effect of a habit on a daily basis, he is willing to call it harmful.” One of the signs that a habit has become harmful is the inability to do one's job, especially when the work is done at home, remotely.

At the same time, the Health Index shows that some people are trying to live healthier lives during the pandemic. 47 percent of respondents admit that they try to spend enough time sleeping, but 45 percent try to never exceed the acceptable alcohol intake. "We can conclude that the pandemic also has positive aspects, namely, some people have changed their daily activities, which owes thanks to the extra time they have, because if they do not have to spend time on the way to work, people can use it for physical activities or sleep," concludes Jānis Kūliņš. 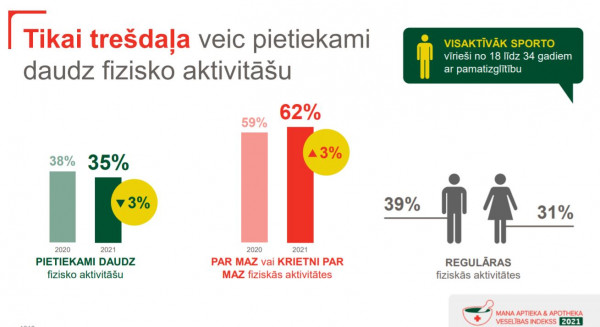 Only a third of people do enough physical activities