Against the background of the migrant crisis in Lithuania, the situation in Latvia is incomparably better for the time being. However, even a small number of migrants still need to be removed somehow. The Latvian State Border Guard has started talks with its Belarusian colleagues about the return of the 9 Iraqis detained on Monday to where they came from. Discussions are unlikely to be successful.
30.07.2021. Imants Vīksne 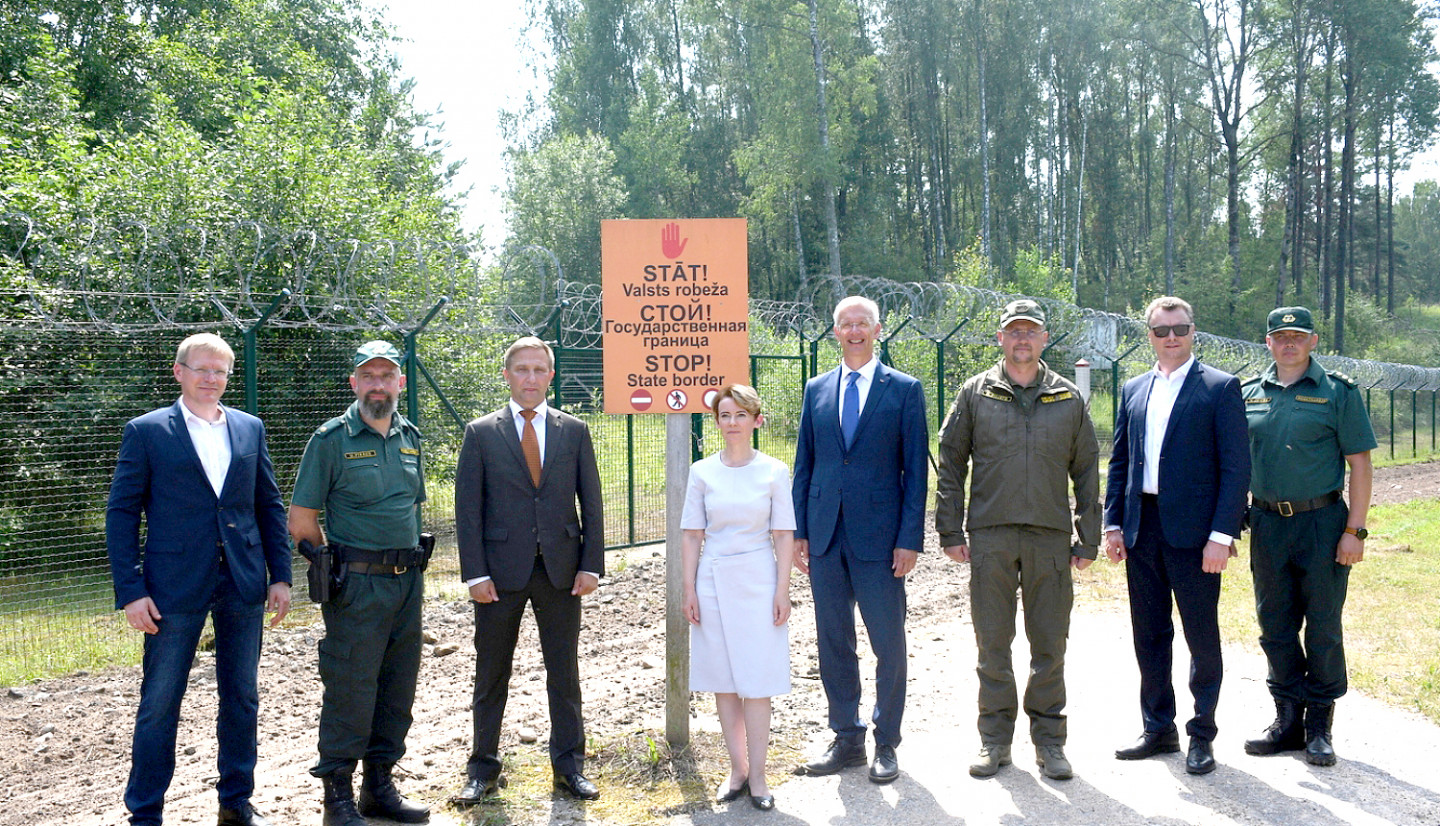 On July 12, Prime Minister Krišjānis Kariņš, Minister of the Interior Marija Golubeva and Chief of the State Border Guard General Guntis Pujāts visited the eastern border of Latvia with a delegation. The situation in Lithuania calls for caution in Latvia ©Robežsardzes publicitātes foto

Until the Covid pandemic, the deportation of illegal migrants was much easier. If the perpetrators of the crime - illegal crossing of the state border - were detained right away, the border guards of the two participating countries promptly met, and if signs of their journey were physically visible on the border, such as flattened grass, broken bushes, shoe prints on the ground, the criminals were handed over to the country they came from. Usually, illegal people try to find a more overgrown and difficult-to-see place on the border to move through. But traces still remain. Accordingly, if they came from Belarus, then it became a problem for Belarus. If the evidence of the crime could not be found in nature, the offender became a problem for Latvia. This procedure allowed decisions to be made relatively quickly. However, due to the restrictions of the pandemic, the border guards of both countries no longer meet in person. Discussions take place only in writing, which makes the procedure for returning migrants much longer or even impossible. Kristīne Pētersone, a representative of the State Border Guard, informs that an official correspondence with Belarusian colleagues has been started about the nine Iraqis who entered Latvia illegally this Monday.

From prison to hotel

The border guards of the Daugavpils Office of the State Border Guard, Border Guard Division detained the violators in Maksimova village. In accordance with the Immigration Law, they have been placed in the Daugavpils Accommodation Center for Detained Foreigners. Criminal proceedings have been initiated intentional illegal crossing of the state border in a group. If the Belarusian side found the presented evidence sufficient, it would, of course, be the most advantageous option for Latvia. If not, then two other scenarios remain. The first will end with the expulsion of the criminals, giving them tickets for their way home to Iraq. After all, the war is over - let them go and restore their homeland. The second scenario is initially cheaper for Latvia and the European Union, but is related to long-term security and social problems. If the migration supporters, or so-called welcomers, instruct the Iraqis and they officially apply for asylum, they will be immediately transferred from the prison for foreigners in Daugavpils or Mucenieki across the street to the asylum center in Mucenieki, and a long and tedious trial will begin. In the end, if they are not granted asylum, they will still be sent back to Iraq. If granted - then these criminals who have converted into legal migrants will be released, so they can leave Mucenieki, and then - wherever they wish.

Iraqis instead of Vietnamese

This year, five groups of people have been detained on the green border of Latvia. In four cases they have been Iraqis, in one Russian. Significantly, the country of origin of illegal migrants has changed. In previous years, human smugglers relocated Vietnamese citizens through Latvia. Now this flow has stopped. Iraqis are coming to the promised land of happiness, the European Union. Most come from Belarus to Lithuania. How many have succeeded, of course, is unknown. It is also unknown how often they manage to enter Latvia unnoticed. However, the number of migrants detained in Lithuania is already huge - over 3,000 people, and that is a crisis. As Prime Minister Ingrida Šimonytė admitted to the state broadcaster LRT: "Migrants cannot levitate in the air, they still have to be housed somewhere." The Ministry of Interior reports that migrants are currently housed in 15 different locations and more are needed. Locals are protesting. The government attributes the origins of the protests in part to organized crime, but the population is objectively justified in being cautious. 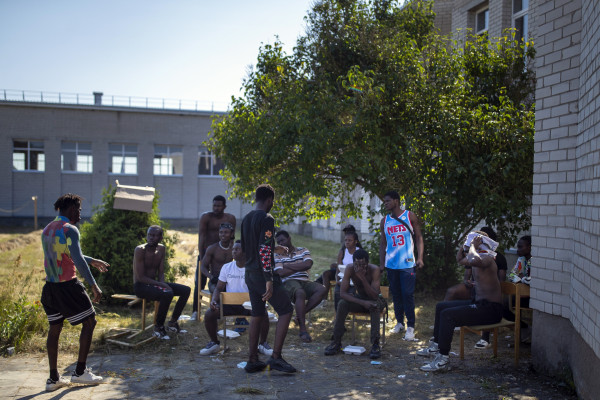 Yesterday, the residents of Dieveniškės promised to come to the government building to protest against the accommodation of migrants. On the map, their county is like a peninsula washed by Belarus on three sides, but connected by a single highway to Lithuania. It is due to this geography that the Ministry of the Interior encourages the placement of a larger number of migrants in a closed school in Dieveniškės - 500. It will be easier to monitor. However, 600 permanent residents also live in Dieveniškės. And bringing in almost the same number of migrants would turn city life completely upside down. Therefore, the municipality does not support the government's plan. Conflicts and protests are also taking place elsewhere where migrants have already been accommodated. Lithuania is in a difficult situation. Other countries are helping. Latvia has also sent tents, beds, generators. Estonia - 100 kilometers of barbed wire. However, only Belarus, through which migrants arrive, can truly stop the migrant crisis. Like how Turkey was a key country in the Mediterranean migrant crisis.

However, Belarus is not interrupting the flow of Iraqis, and the Baltic defense ministers see the crisis as a targeted hybrid attack.

During a video conference on Wednesday, the ministers agreed to coordinate actions related to the threat to the stability of the Baltic region.

The border is strengthened by the army

As in Lithuania, the border guard forces in Latvia are being strengthened with the support of the army. The National Guard and more vehicles are involved in border patrols. Experts from the European Border and Coast Guard Agency Frontex have also arrived at the Latvian-Belarusian border to reduce the risks of illegal immigration. If the flow of migrants in Lithuania will be restricted, human smugglers might change the recommended route to Latvia for their customers. And then it will be far more than ten Iraqis with whom our authorities have to fight, it will be hundreds and thousands. As at present in Lithuania. The Latvian State Border Guard, when organizing the border protection of the Republic of Latvia, the European Union and the NATO Alliance, also calls on the population to be vigilant:

"The support of local people is very important for the State Border Guard in the fight against illegal border crossing and smuggling. The State Border Guard would like to thank everyone who does not remain indifferent and helps the border guards in the performance of their duties." The last group of Iraqis has also been arrested based on information provided by a local.

This is a serious crime

Even in political circles, the view is currently being cultivated that illegal migrants commit a minor administrative offense when crossing the country's green border, which would not be subject to severe sanctions. That these poor people should be wrapped in warm blankets and received as dear guests. Even Interior Minister Marija Golubeva is in favor of a more liberal policy on migrants. However, welcomers need to keep in mind that illegal migrants and their allies - smugglers and traffickers of human beings - commit serious crimes under criminal law.

(1) For the intentional illegal crossing of the external State border, the applicable punishment is a temporary deprivation of liberty or community service, or a fine.

(11) For the intentional illegal crossing of the State border, if such has been committed by a person on whom the prohibition to exit the Republic of Latvia has been imposed, the applicable punishment is the deprivation of liberty for a period of up to one year or temporary deprivation of liberty, or community service, or a fine.

(2) For the commission of the acts provided for in Paragraph one, if they have been committed by a group of persons or using a vehicle, or violating the specified prohibition to enter the Republic of Latvia, the applicable punishment is the deprivation of liberty for a period of up to two years or temporary deprivation of liberty, or community service, or a fine.

Section 285. Illegal Movement of a Person Across the State Border

(2) For the commission of the same acts, if they have been committed by a public official, using its official position, or a group of persons according to a prior agreement, or for illegal movement of several person across the State border in one time, the applicable punishment is the deprivation of liberty for a period of up to five years or temporary deprivation of liberty, or community service, or a fine, with or without the confiscation of property.

(3) For the commission of the same acts, if they have been committed by an organised group or they have resulted in serious consequences, or also who commits illegal movement of a large number of persons, that is, more than five persons at one time, across the State border, the applicable punishment is deprivation of liberty for a period of two and up to eight years, with or without confiscation of property and with or without probationary supervision for a period up to three years.

(4) For the commission of the same acts, if they have resulted in death of two or several human beings, the applicable punishment is deprivation of liberty for a period of three and up to fifteen years, with probationary supervision for a period up to three years.