On July 27, the US Congress (House select committee) launched an investigation into the Capitol riot on January 6. Admittedly, this investigation seems to be highly politicized from the very beginning, which once again confirms that all people in this world are more or less similar, and the purpose of such committees is similar in Latvia, the United States and elsewhere - to stage a political tribunal, which usually quickly turns into a farce.
30.07.2021. BLBens Latkovskis 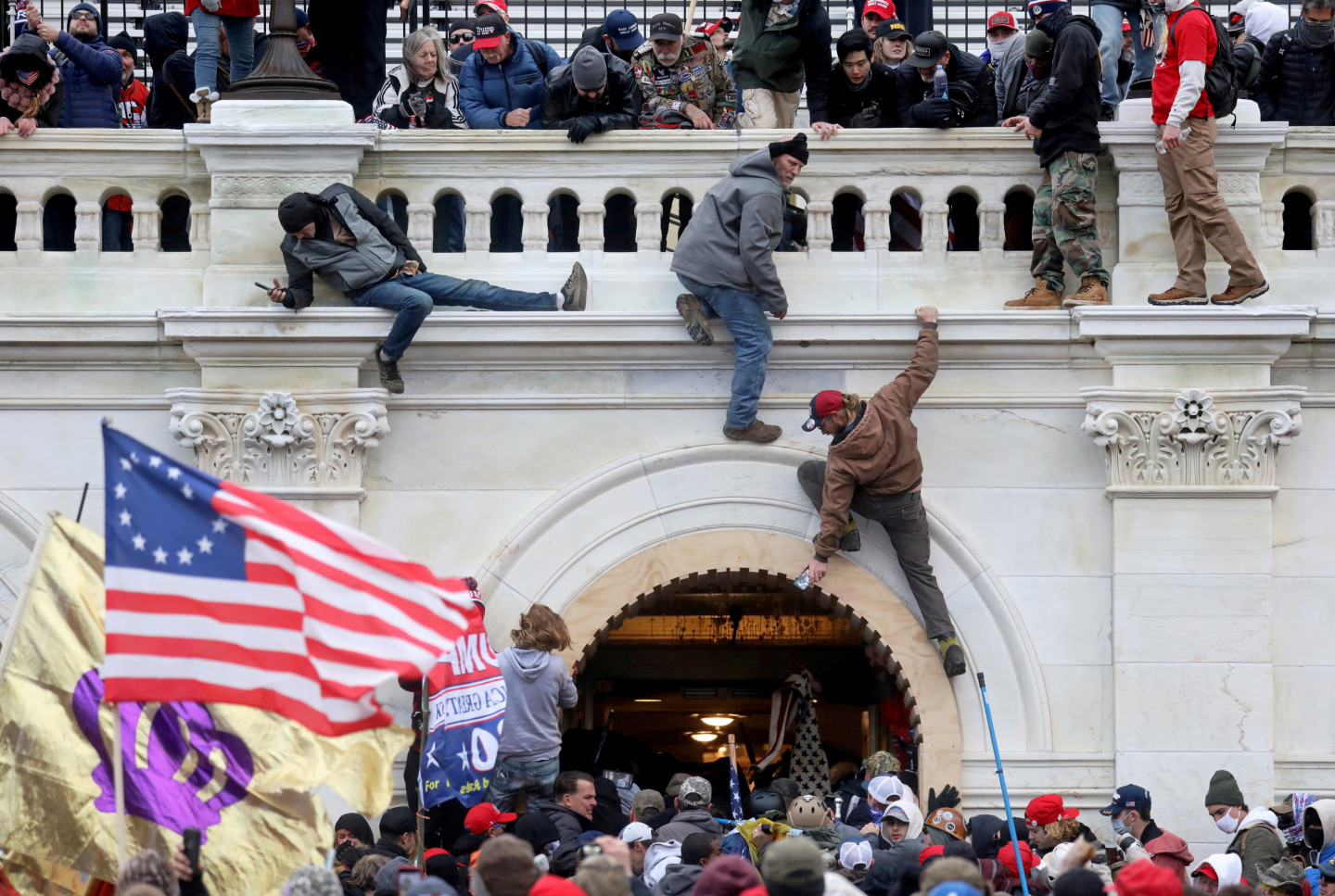 Even the formation of the committee itself began with a fundamental disregard for the principles of democracy. Usually, such committees are represented by different political forces, different views, in order to give it an aura of seeming objectivity. The leadership of the US Democratic Party of Congress, with its bulldozer in a dress, Nancy Pelosi, at the forefront, rejected Republican nominees Jim Jordan and Jim Banks, known as supporters of former US President Donald Trump. In their place, Pelosi chose others - zealous anti-Trumpists who are close to the Democrats - Adam Kinzinger and Elizabeth Cheney.

It is clear that the Democrats are in a much better position in this game and will try to squeeze every last drop out of this investigation. They are trying to frame the attack on Capitol as basically a carefully planned coup d'état attempt, like the capture of the Winter Palace, while Republicans try to distance themselves from the event as much as possible, claiming that the crowd was unorganized, created spontaneously and acted impulsively. Republicans insist that the main question should be different: how could a crowd of marginal freaks break into the supreme legislature of the world's strongest, most influential country and carelessly (pointlessly) wander there for a couple of hours? Republicans have even threatened to organize their own investigation, the main purpose of which will be to find out why the National Guard did not quickly rush in to help the police officers guarding the Capitol. However, the Democratic Committee has not been given such tasks. That is why, in order not to deviate from the previously set course, the committee does not include those who think differently. They are replaced by nominal opposition, who are actually allies of the Democrats.

The central role of the committee has been formulated in a special statement by a congressman from the Democratic Party, Bennie Thompson. The statement said that some people, men and women, arrived in Washington on January 6 with the clear aim of undermining our democracy. "We know there is evidence it was a coordinated, planned attack," the statement said. However, this "evidence", as well as the attack planners and coordinators are not mentioned in the statement.

The public investigation began by showing a video of the crowd breaking into the Capitol. The first testimony was given by Capitol Police Sgt. Aquilino Gonell, who said with tears in his eyes that he felt like he was in a medieval battleground and that he told himself "This is how I’m going to die - defending this entrance". Another police officer, Michael Fanone from Metropolitan Police, testified that the crowd shouted “Get his gun. Kill him with his own gun." He also noted that other rioters had intervened and defended him. In a way, the testimony of police officer Harry Dunn, in which he accuses the rioters of racist remarks, is significant. It is significant because in today's United States, accusations of racism hold about the same meaning as swearing with uncensored words did in the post-Soviet space. Namely, when the detainee can't be accused of anything, but a reason for the detention must be found.

It just so happened that on January 6 this year, the CNN channel was airing on my TV at home, and I saw all this Capitol storming live from the very beginning to the end. Of course, to assess the situation on the spot in the epicenter of events and sitting on a comfortable sofa, there are two incomparable things, but still... I remember the evening of January 20, 1991, when the then Prime Minister Ivars Godmanis informed about the shooting in Bastejkalns and by the Ministry of the Interior. I remember on August 19 of the same year, when Gennady Yanayev, the nominal leader of the Anti-Gorbachev coup, read the statement of the Extraordinary Committee on Gorbachev's "illness" and "temporary resignation" with shaking hands at a TV press conference. The drama was quite incomparable. It could be argued that there was my personal interest in those events, while the events in the United States for those living across the ocean are like another episode in a minor TV series. However, I also well remember the attempt at the Turkish military coup on July 15, 2016, which was broadcast live on CNN. Although all this coup later raised great doubts as to whether it was not inspired by Erdoğan himself to destroy and demoralize the opposition through brutal repression, its course was dramatic enough to follow long into the night. Again, there was no personal interest. Purely interest in a political drama.

There was nothing like it on January 6. No drama. Total boredom, because from the very beginning it was clear that there is no dynamic progression of events. There is no forward or backward movement, as in the case of Turkey when it became clear around three in the morning that the coup had failed. People moved from one place to another without any purpose and obviously did not know what to do in the Capitol. To say today that these fur-wearing weirdos have seriously threatened the nearly 250-year-old democracy in the United States is, to say the least, shameless. It is the Everest of political cynicism, political hypocrisy. All the more so because everyone in this committee and outside it, when commenting on its work, speaks with such overly serious facial expressions, uses such dramatic words as if it really were considered an existential "to be or not to be" type of question.

In order to deprive the Capitol of even the slightest features of absurdity and make it particularly tragic, it is usually mentioned that five people, including a police officer, have died as a result of this riot. It is almost never mentioned - who are these people who died. Let's name them all.

42-year-old Capitol Police officer Brian Sicknick, who was also that "including a police officer" part of the sentence. According to Reuters, Sicknick lost consciousness after returning to his office. He was taken to the hospital, where he died the next day. He was diagnosed with a stroke. The New York Times reported that during the riots, Sicknick was struck in the head with a fire extinguisher, which was also the cause of the stroke later. There is no criminal case for someone beating him in the head (basically for murder), despite the fact that the Capitol building is full of CCTV cameras and all the participants in the riots have been counted down to the last person, as is their every move. Dozens of people are awaiting trial for various offenses, but none of them is a person who hit Sicknick in the head. Consequently, the statements that the cause of Sicknick's death is specifically the riots of January 6 are quite doubtful.

Ashli Babbitt, a 35-year-old veteran of the US Air Force, is an indisputable victim of riot. She was shot directly by a police officer whose name is still kept quiet. Again, no case of "misuse of powers" or "manslaughter" has been brought. There is a general consensus that the police officer shot for a good reason and zealous Trump-supporter Babbitt, a QAnon believer, herself was to blame. The other three victims of the riots are Rosanne Boyland, Kevin Greeson and Benjamin Philips. The cause of their death is "health problems". Greeson died of a heart attack, Philips of a stroke. However, as they had all been involved in the riots before, they were all counted among the victims of the "attack on Capitol".

Experience has shown that if real, indisputable facts are not enough on an issue and the facts need to be bolstered to strengthen the position (as in the case of these five deaths, which must be attached to make the story "more serious"), then the other details are also highly questionable. But most importantly, it becomes absolutely clear that it is not the event itself that is the basis for actualizing the case, but the possibilities created by blowing this event out of proportion.

Unfortunately, the work of this House select committee on January 6 does not, at least for the time being, in any way enhance the authority of true US democracy. Consequently, it does not increase the level of security in the world, sad to say.