"This is an important moment for our Alliance (NATO). Almost 20 years ago, after the United States was attacked on 9/11, together, we went into Afghanistan to deal with those who attacked us, and to make sure that Afghanistan would not again become a haven for terrorists who might attack any of us. And together, we have achieved the goals that we set out to achieve,” said US Secretary of State Antony Blinken in April this year.
17.08.2021. MKMāris Krautmanis 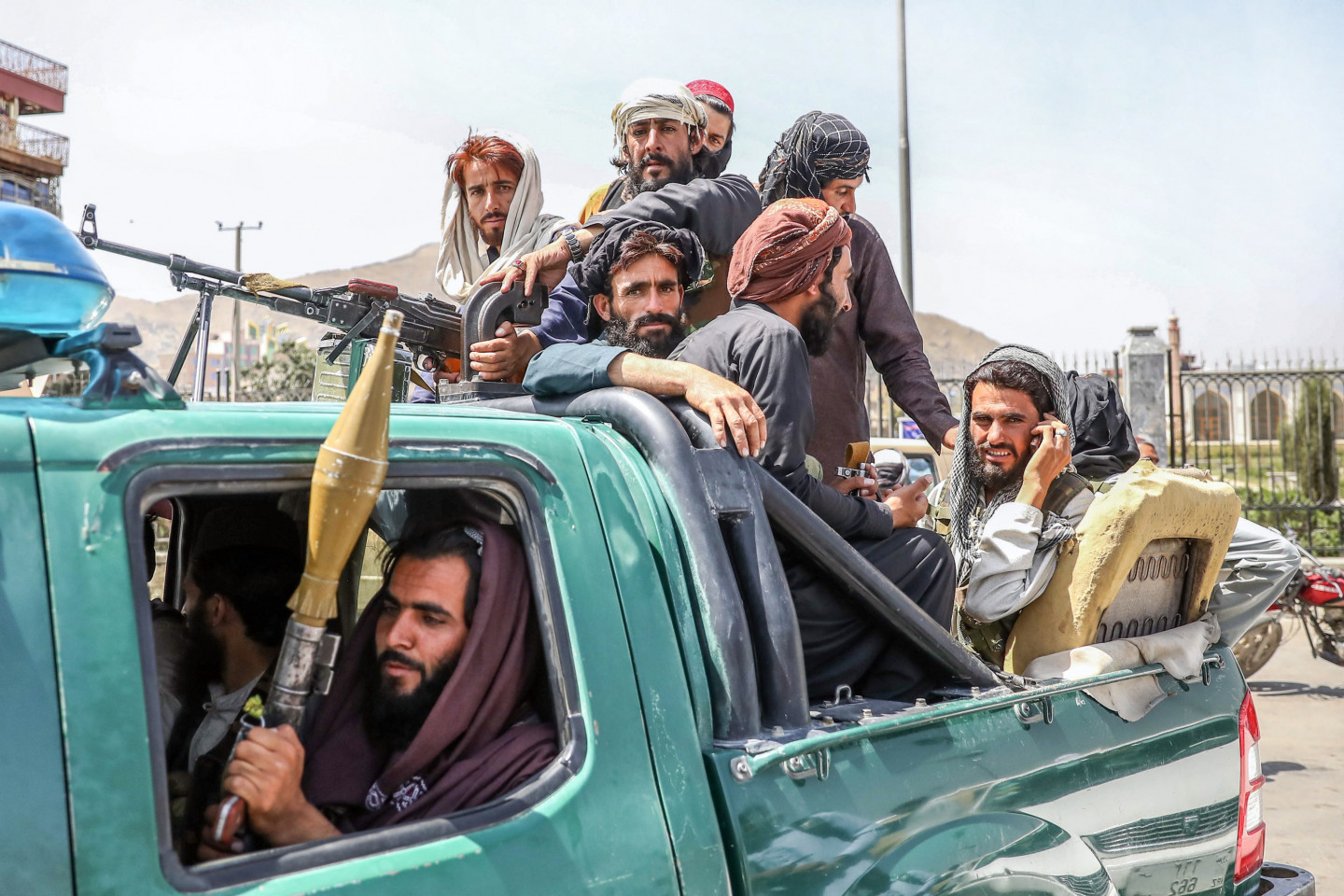 But it can happen that even the highest officials call what they want as what they have and do not anticipate what may happen...

Militants from the Islamist group Taliban entered the suburbs of Kabul, the Afghan capital, on Sunday, August 15 with no resistance. For the time being, Afghan officials have announced that they intend to hand over power to the temporary government in a peaceful manner. The Taliban have also said they want to peacefully take full control of the country in the next few days. Meanwhile, Kabul airport has been flooded with people wanting to leave the city, and countries are closing embassies and hastily evacuating their diplomatic staff. There have also been reports that government officials are already leaving the country and President Ashraf Ghani has fled to Tajikistan.

The President of the United States is optimistic and threatening. But what is he optimistic about? On Saturday, Joe Biden warned Taliban leaders of a "swift and strong" response if U.S. workers were put at risk. So the only "red line" that the United States does not intend to cross is a possible attack on the Americans. Then they will fiercely shoot in return. But the Taliban are unlikely to shoot at the Americans. They are likely to allow the departure of planes that will also include fleeing Afghans.

Something similar to what happened at the end of the Vietnam War is taking place. Neatkarīgā has already written about these parallels and the possible refugee problem.

There will be new refugees

"One more year, or five more years, of US military presence would not have made a difference if the Afghan military cannot or will not hold its own country. And an endless American presence in the middle of another country’s civil conflict was not acceptable to me," said the leader of the superpower.

The presence in the middle of another country's civil conflict is that the official Afghan government forces show little resistance to the Taliban, no resistance at all, or are happy to move to their side. Depending on the location. The battles for Mazar-i-Sharif went on for a week, but Jalalabad surrendered without any shots fired. It depends on how furious or friendly the many local nations, tribes and countless clans are with the Taliban. Probably quite a few people are not happy with the Taliban and they will flee or try to flee. Already, according to modest estimates, a quarter of a million people have left their homes. There will probably be more, and it is already a humanitarian tragedy.

A photo of Gulabuddin Amiri/AP has become popular, where a Taliban militant in slippers and a traditional outfit, holding an old gun is guarding a hundred captured Afghan security forces sitting on the ground. The photo was taken in the city of Ghazni.

1000 years ago (the decades from 1001 onwards), the Muslim ruler Mahmud of Ghazni made a fierce expansion southward, attacking the lands of present-day Pakistan and India. The year 1021 was especially "productive" when several Indian rulers were defeated and killed. There were also refugees at that time. Quite a few refugees for that time, who are now the Romani people...

Nothing much has changed in Afghanistan, apart from the fact that people have machine guns and mobile phones. The idea of what the state should look like is not much different from what it was 1000 years ago. Just like the relationship between people and Allah and the understanding of how a woman should behave.

What about art and music?

Until the new Taliban expansion, modern art and culture flourished in Kabul - TV shows, movies, music. There was even rap music and the star of this genre Susan Firouz, who in no way will be able to return to the stage. I do not know how the relationship between the great Afghan musicians - men - and the Taliban will develop. The brilliant singer Farhad Darya used to be able to perform even in Taliban-controlled areas. However, even men will not have much freedom in singing. Oh, who can talk about shows when human lives are hanging in the balance! There is a great concern for those artists who are not currently in any other country. Those in other countries will be forced to live in exile and try to establish some of their own cultural centers there, like the Persians who managed to transfer their cultural life to Los Angeles after the Iranian Islamic Revolution in 1979. Police officers, officials and anyone who feels that things will not end well are also leaving the country in a hurry.

No one has succeeded in conquering Afghanistan

Fearing that Russia would try to snatch the exit to the Indian Ocean, the British Empire launched the First Anglo-Afghan War, which lasted from 1839 to 1842 and ended in a terrible defeat for the English. Also in the Second War, from 1878 to 1880, the British Empire did not conquer Afghanistan but at least managed for the country to have a power somewhat loyal to them, providing a buffer zone between Russia's conquests in Central Asia and British India.

The USSR also failed, which fought in Afghanistan from 1979 to 1989 and was eventually forced to leave. When an external power in Afghanistan treats the population cruelly, it creates a huge backlash against the occupiers and even opposing local groups unite to drive out the invaders.

The US and NATO forces are now departing.

What will happen to Afghanistan next is hard to imagine.

The Taliban say they have changed... But reality is unlikely to be so pretty

Maybe the Taliban will keep their promises and not turn the occupation of Kabul into a bloodbath, not look expansively towards neighboring countries (Tajikistan) and allow young girls to study? The Taliban say they have changed. But it can hardly be believed right away. With the disappearance of factors such as NATO's presence and the weak government of President Ashraf Ghani, internal power struggles may erupt, and it is not guaranteed that the current "soft" Taliban leaders will rule, who even have a Twitter account - Official Twitter Account of the Spokesman of Islamic Emirate of Afghanistan, Zabihullah Mujahid. The Islamic Emirate of Afghanistan - that is how the country will be called now. If power is seized by more radical forces, a violent jihad may take place.

Afghanistan was not very rich, but now its economy will be in an even deeper crisis. If any more sanctions and isolation are devised, the country's internal pot will boil over and explode.

How could the United States get to this sad situation?

It is probably the case that it is becoming more and more expensive for the United States to maintain military infrastructure, even losing lives in this distant country. Even the largest superpower could not stand it, and it was beginning to have a bad effect on the US economy. It is nice to be the world's policeman who defends his interests around the globe, exports democracy and destroys local political elites if they do something that he does not approve of. But sometimes it's too much. Afghanistan has not been conquered by anyone, and the United States also can't deal with it. As the English poet Rudyard Kipling wrote, "Oh, East is East, and West is West, and never the twain shall meet." In any case, in the clash of civilizations, this case of Afghanistan is a severe blow to the West and a major step backwards on the road towards a global democracy with elections, human rights and other attributes.

In the Soviet-era film The White Sun of the Desert, Red Army soldier Fyodor Sukhov said, "The East is a delicate matter." Russia jumped into Syria, where it got involved in its civil war, but hardly anything similar is expected with Afghanistan. Of course, it will carefully watch if there is any opportunity to get involved, but at least in the near future, Vladimir Putin will not do anything. But he will keep watching very carefully. It can be imagined that there are hordes of experts in the Russian Foreign Ministry building and Eastern research institutes who know Pashto, Dari and other Afghan languages and who are well informed about what is going on.

Europe is watching in horror

For Latvia, Afghanistan is so very far away. Apart from the Latvian soldiers who died while performing "international duty" or "defending democracy", we have little to do with it. However, if Latvia's borders continue to be as permeable as they are now, it may turn out that a much larger number of illegal or legal refugees will have to be received.

Latvia is in the European Union, but the EU is completely baffled about Afghanistan. How is it that Afghans do not accept Western values, do not want democratic elections, do not want Western education? They want to study the Quran, graze goats and make wheat naans, as they have done for hundreds of years. What a weird thing!

European media and social networks are increasingly accusing the United States that ending the mission was a mistake. However, if we go back to the fact that the United States can no longer bear the burden of Afghanistan, then what can you even say anymore...

And maybe it is not necessary to shove our laws and virtues on absolutely everyone and everywhere? Maybe the Western values are not values for others? And maybe not all the values that exist in Europe and America are values at all?

Maybe Europeans should stop lifting the lid on every pot and sniffing what maushava or aush is being cooked in Afghanistan, but cook their own soup to their liking and leave others alone?