Bus traffic gets worse, while tickets get more expensive

On September 1, 2021, the state took a broad step to replace the half a billion euro grants for public road transport with grants straight to Andris Šķēle, Ainārs Šlesers, Juris Savickis and Aleksandrs Bandavs.
02.09.2021. Arnis Kluinis

SEEING THE CALM WITH OUR OWN EYES. This is what the boarding of the passengers on the first commercial route Riga-Daugavpils looked like on September 1, with the departure time at 11:50. There was no need for passengers to fight for seats on the bus after the number of routes was reduced from eight to three. The bus driver assured Neatkarīgā that on the previous trip to Riga, there was enough space on the bus for everyone who was waiting for the bus at the country stops. Regarding ticket prices, one passenger added that in the future she would travel on the still subsidized route Madona-Riga, where the distance that she needed to travel was now one euro cheaper than on a commercial route. ©Arnis Kluinis

The state, in this case, is the New Conservative Party (Jaunā konservatīvā partija), its delegated Minister of Transport T. Linkaits and the Chairman of the Board of the Road Transport Administration (RTA) serving him, Kristiāns Godiņš. They are refusing to pay subsidies to bus and coach companies, but they are not giving up the approximately half a billion euros that they are expected to distribute over the next 10 years among the carriers of their choice. The essence of the case is the excess profit that some selected companies and their owners will be able to get by dividing the amount of grants fixed in public administration documents for the smallest possible traffic volume, not a fixed one. The amount of state-subsidized transportation is reduced in two ways. 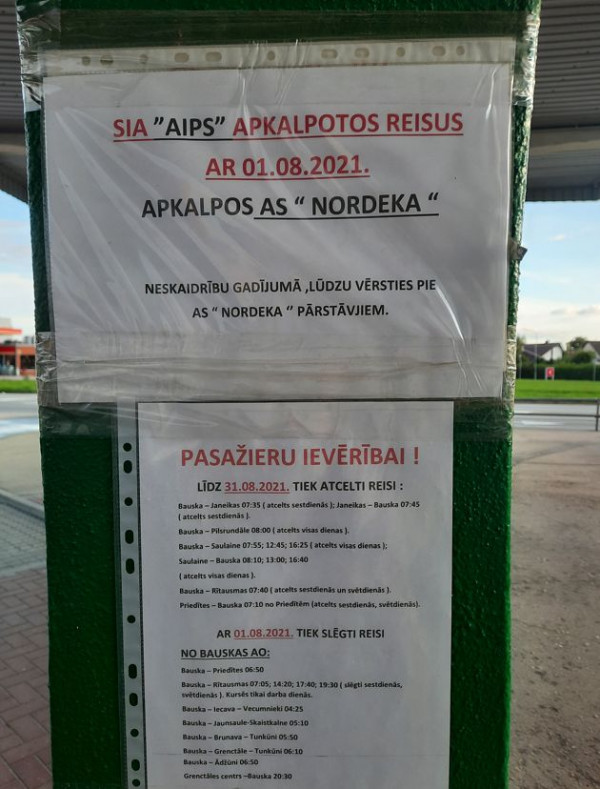 CAUSES AND CONSEQUENCES. Notices posted on poles at Bauska bus station inform about change of carriers and closure of routes / Arnis Kluinis

First, routes are closed, as happened, for example, in Bauska, where the local carrier Aips was replaced on August 1 by Nordeka, which belongs to J. Savickis. On July 27, RTA announced to the public that “this will enable passengers to receive high-quality public transport services provided by buses with an average age of 4.6 years over a 10-year period.

The Road Transport Administration surveyed the fleets of the winning carriers, carefully inspecting all 305 buses involved in the provision of services, and made sure that everything that the companies included in their tender would be realized.” In reality, passengers will no longer receive any services. Poles at Bauska bus station are covered with realistic statements that "bad" buses are being replaced not by good buses, but by no buses. A large part of the list of routes, which has been shortened for years already, was closed on August 1. Formally, of course, some buses continue and will continue to drive around Bauska, so that Nordeka has an excuse to get its slice of the subsidy pie. However, the appearance of a completely new and shining bus in the countryside here and there does not make this technical achievement a means of transporting people. People need to find ways to either travel without buses, to deal with not traveling, or not to live in the countryside. Similar to Bauska, the new buses or rather the absence of buses were provided to those residents of Latvia who have to get from or to addresses in the territories marked with the words “Pierīga”, “Liepāja”, “Kuldīga, Saldus” and “Daugavpils, Krāslava”.

It would be an exaggeration to demonize T. Linkaitis and K. Godiņš, because the decrease in the volume of public road transport had started before them and would have happened without them. Another thing is that some have learned how to benefit from it all. Only the staff of the beneficiaries changes depending on the parties and ministers.

Ticket prices for journeys between destinations have therefore been increased from 9 euros to 11.50 euros and for shorter distances in proportion to the length of the distances. In order to get people to use such buses, the number of trips per day has been reduced from eight to three. 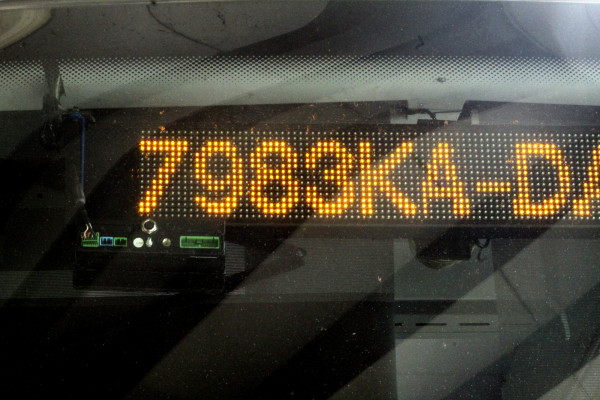 ALMOST UNNOTICEABLE. Government regulations require people to be warned about the more expensive routes with the letter "K", but in the case of Daugavpils buses it is difficult to notice it among all other letters and numbers / Arnis Kluinis

The decrease in bus routes on the Riga-Daugavpils route happened because Daugavpils Bus Park were willing to take on the risk of taking three daily non-state-subsidized routes and the already mentioned Nordeka did not take the risk. According to Nordeka's calculations, a ticket for 18 euros per trip between both last stop destinations would correspond to the cost of transportation. Nordeka did not undertake to explain to passengers such an increase in ticket prices. Other carriers specifically addressed by RTA also did not want to do that. From the point of view of presenting change, it would benefit from a number of carriers, which would allow us to talk about a free market and competition, and increase confidence that the sole carrier will not disappear or set a price of tickets that people will be outraged at.

The ticket for 11.50 euros is currently like a hot air balloon to find out the direction and strength of the prevailing winds. Namely, to find out whether the price corresponds with the cost of transportation, the carriers' plans to earn and the readiness or unpreparedness of potential passengers to continue to use bus traffic, which has become not only more expensive but also more inconvenient. Now buses no longer run around the clock, but in the morning only from Daugavpils to Riga, in the afternoon only from Riga to Daugavpils. It is easy to imagine cases when people could manage to settle their matters in Daugavpils by leaving Riga in the morning, instead of the previous evening, without needing to search for accommodation in Daugavpils. These changes are even more painful for rural residents, who can no longer use buses on the way to work in the direction of Daugavpils; others, in turn, cannot return from work in the evenings, driving in the direction of Riga. In both cases, they have to look for either other means of transport or other places to live and work. Bus passenger transport continues to follow a downward spiral, with a reduction in the number of routes leading to a reduction in the number of passengers and a reduction in the number of passengers to a reduction in the number of routes. Artjoms Vengrevičs, Commercial Director of Daugavpils Bus Park, told Neatkarīgā that it would take at least a month for the new style of transportation to start calculating how viable they are.