Based on the application of Aivars Lembergs, the Constitutional Court has initiated a case regarding the Law On the Procedures for Holding under Arrest and Cabinet Regulation No. 800 “Regulations of the Internal Procedure of the Remand Prison” compliance with the Constitution. The contested norms prohibit a detainee from using a computer with an Internet connection for work.
07.09.2021. Uldis Dreiblats, Ritums Rozenbergs 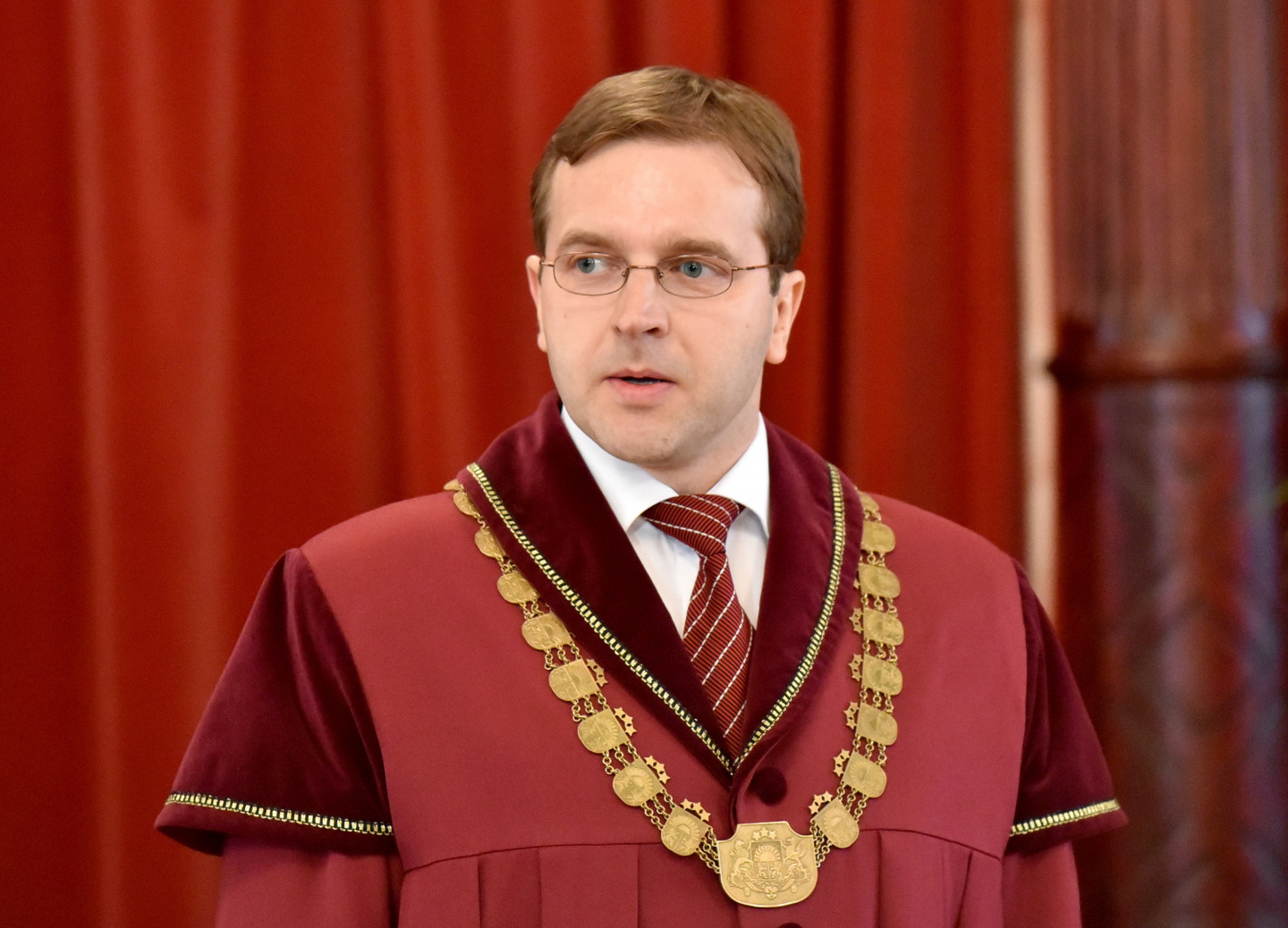 The panel headed by the Judge of the Constitutional Court Aldis Laviņš has decided to initiate a case regarding the compliance of the norms of the Law On the Procedures for Holding under Arrest and the regulations of the Cabinet of Ministers with Articles 101 and 106 of the Constitution. The decision was made on the basis of the arguments mentioned in the application of Aivars Lembergs. ©Kaspars KRAFTS, F64 Photo Agency

The submitter has indicated in the application that the said regulatory enactments do not comply with the fundamental right to participate in state and local government activities and perform civil service guaranteed in Article 101 of the Constitution, as well as the fundamental right to choose occupation and workplace according to abilities and qualifications guaranteed in Article 106 of the Constitution.

However, the application to the court indicates that it is a question of non-compliance of the above-mentioned regulatory enactments with the Constitution in relation to those detainees who are in the Prison Administration with a convicting court judgment in a criminal case that has not yet entered into force, not to detainees during the pre-trial investigation.

The application to the court together with A. Lembergs was prepared and submitted by the sworn advocate Dr. iur. Inese Nikuļceva.

The will of the electorate

The application explains that in the last municipal elections the submitter was the frontrunner and was elected to Ventspils City Council with 54.32% of the votes. It is indicated that such a percentage of votes is the fifth best result in Latvia as a whole: “In the specific case, the public (voters) have clearly indicated that their interest is for the submitter of the constitutional complaint to continue to perform the duties of the deputy and also of the chairman of Ventspils City Council. The number of votes cast for the submitter of the constitutional complaint during the municipal elections, when he was in custody, shows that voters trust the submitter of the constitutional complaint and are convinced that he will work in the interests of voters in Ventspils City Council and will certainly not commit any criminal offenses or other illegal activities. Thus, at least in cases where detention is applied for a political official, a court decision representing the public interest cannot be valued above the confidence expressed in the general election by the electorate, who are the bearers of the sovereign power of the state."

The document states that there are no obstacles to participate in the work of the municipality remotely, even while in detention. All that is needed is for adjustments to be made to the above-mentioned regulatory enactments.

Analysis of the Constitution and international documents

The application explains that detainees in Latvia enjoy the fundamental right referred to in Article 106 of the Constitution to continue their work and perform their duties, insofar as it is compatible with the purpose of detention and detention regime: “In order to participate in the meetings of Ventspils City Council and perform other functions of the position of a local government deputy and chairman of the Council, the submitter of the constitutional complaint needs permission to communicate remotely only with a public law entity - Ventspils City Council. The submitter of the constitutional complaint does not request permission to use the computer for other non-work-related purposes.”

References are also made to Article 25 of the International Covenant on Civil and Political Rights, which emphasizes the right of every citizen, without unreasonable restrictions, "to take part in the conduct of public affairs, directly or through freely chosen representatives," on general terms of equality.

The application explains that “there is no justification for imposing stricter restrictions on employment for detained people if the person has been convicted but the judgment has not yet entered into force. On the contrary, such persons are protected by the presumption of innocence, so the restrictions must be strictly in accordance with the objective of ensuring that the person does not evade the possible final conviction."

As stated in the document, "the legislator should consider the possibility of imposing more proportionate restrictions on detainees who have been convicted but the judgment has not yet entered into force, equating them with restrictions on convicted persons, including allowing the use of a computer with an Internet connection for work purposes."

What is allowed in Europe is denied to us

The application analyzes the legislation of neighboring countries, Scandinavian, and European countries, which allows detainees to work and use computers. The main conclusion is that "detainees, in cases where investigations have already been completed and a person has already been convicted, are comparable to convicted persons and are given the right to work on a computer."

The Estonian Imprisonment Act is mentioned. It provides for the possibility for prisoners to work outside the prison with or without supervision, provided that this is in line with the purpose of detention and the prisoner's individual plan. Estonian law states: "Prisoners are prohibited to use the Internet, except in the computers specially adapted for such purpose by the prison service which enable access under the supervision of the prison service to public legislation databases and register of judicial decision."

Mention is made of the German Prison Act, which provides that a detainee may work for remuneration if it serves the purpose of receiving, keeping or increasing qualifications for employment after release.

The Finnish Imprisonment Act also allows a prisoner to work or participate in an internship outside the actual working hours of the prison, and may allow a prisoner to use prison equipment for their own work free of charge, provided this does not interfere with prison order, prison safety and activities. In addition, the Finnish Imprisonment Act provides detailed regulations on the use of e-mail, the Internet and mobile phones. It reads: “A prisoner may be given permission to send and receive email messages for an important reason related to the maintenance of outside contacts, subsistence, or attendance to work-related, educational, judicial, social or housing matters or for another corresponding important reason."

Similarly, the Swedish Act on Imprisonment provides: “A prisoner may be in contact with another person through electronic communication to the extent that this can be conveniently arranged. However, such communication may be refused if it may jeopardise security in a way that cannot be dealt with by listening-in."

The submission to the Constitutional Court emphasizes: “As can be seen, in other European countries not only for convicts but also for detainees, especially those who have already been convicted but the judgment has not entered into force, it is possible to do their own work in prison and use a computer for such purposes. The submitter of the constitutional complaint does not require that such permission be unconditional. It is clear from the regulations of other countries that permission to use a computer with an Internet connection can be denied if it endangers the security of the prison, and the prison administration can block other sites that are not necessary for work. ... The submitter of the constitutional complaint requests permission to work remotely in Ventspils City Council, which is a subject of public law; he is not seeking permission to use the computer to access other, private Internet sites."

Decided to look into the complaint

It should be reminded that this is the second application of A. Lembergs to the Constitutional Court, which has been accepted for consideration this year.