Kariņš's use of Covid masks for creating children

The government of Krišjānis Kariņš without a Covid mask scared people so much that every quarter, 500 fewer children were born in Latvia than in the same quarter a year ago. Since the government imposed Covid masks on itself and others, the rate of birth decline has slowed to an average of -400 children per quarter.
08.09.2021. Arnis Kluinis 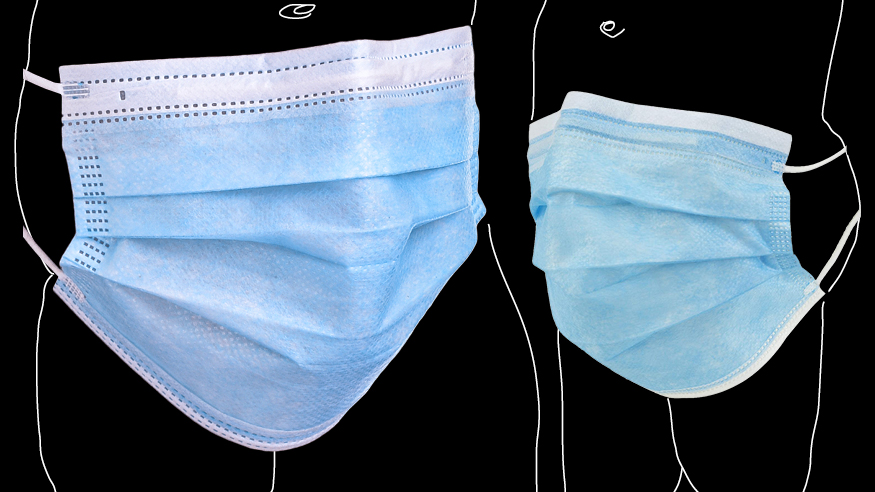 The change of the Saeima and governments really looks like the main factor that accelerates or slows down the extinction of the current population of Latvia. This extinction is generally as stable as Latvian politics, which have not changed substantially since 1990. Only the faces have changed, the most important of which are the faces of the Prime Ministers. The Presidents have been able to stand next to them and in the foreground only episodically, like in the case of Vaira Vīķe-Freiberga, but the Saeima has been interested in people only a few months before and after the re-election of the Saeima ever since Anatolijs Gorbunovs left the Saeima. At other times, it is a place for reconciling the interests of different groups, about which people not involved in these processes cannot and do not want to know anything. On the other hand, governments, with their leaders and most visible ministers, have an impact on society, even if people cannot clearly understand how they are affected.

A clear example of the impact a change of government has on people's behavior is shown by changes in the number of newborns by months, quarters, years. Here is the most recent, most relevant example, when the government of Māris Kučinskis was replaced on January 23, 2019, by the government of Krišjānis Kariņš. In January and for nine more months, children continued to be born, upon whom the impact of the new government was theoretically and medically ruled out. If quarterly data are used instead of monthly data to simplify the birth rate curve, then it turns out that K. Kariņš had inherited from M. Kučinskis a decrease in the birth rate by 200-400 children in a quarter compared to the same quarter a year ago. This was how it started in 2017 (more precisely, already in mid-2016) and how it continued in 2018 and the first half of 2019. However, the rate of decline decreased significantly from -381 newborns in the second quarter compared to the second quarter of 2018 to -8 newborns in the third quarter against the third quarter. That's because the third quarter of 2018 was the pre-election time of the 13th Saeima, when people were promised the moon and the stars, etc. It does not matter exactly which pre-election character had convinced the people in question that this character needed to gain state power in order to rain down all kinds of benefits from the clouds and that therefore people needed not only to open their mouths towards the skies, but to create new ones with their unborn children, to catch more. As a result of these promises, not only did just half of the eligible voters actually go for a vote on October 6, 2018, but the birth rate curve made a zigzag from a deep minus to almost zero compared to a year ago. At the beginning of October 2018, people were convinced of a beautiful future, which the elections would allow to be achieved with just one move, by throwing the right ballot in the ballot box. Creating children is not as convenient. It usually requires several strokes with different parts of the body - the bodies of two people - which can normally take several months until the moment when the count down for the next 9 months can start.

The same can be said for the beginning of 2019 with events that resulted in more children being born at the end of the year than at the end of 2018. People had wanted to believe from the unusually long formation of a government in Latvia that something good had to be born from such great effort and that K. Kariņš might have this goodness in comparison with his competitors to the post of Prime Minister. Namely, the lack of a large and loud crowd of supporters was compensated by the fact that he did not have a bunch of opponents that was noticeable in number and volume. 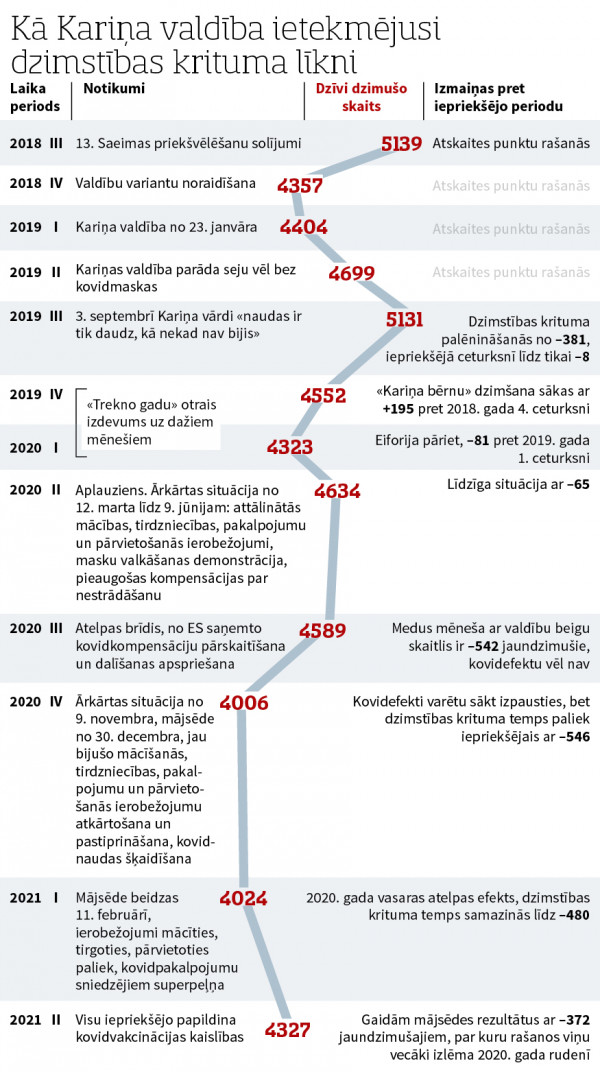 How Kariņš's government has affected the birth rate curve / Neatkarīgā

As a result, the “Kariņš's children” period started with +195 children in the 4th quarter of 2019 against the number of “Kučinskis children” in the 4th quarter of 2018. However, it turned out to be just a moment without any far-reaching consequences. In the next two quarters, birth rates plummeted to -81 and -65 children against their points of comparison and then plummeted to -542 newborns in the third quarter of 2020. If we calculate 9-12 months ago, then the result should have been +542 children. K. Kariņš said his famous words “there is more money like than there has ever been before” not in the context of Covid-19, but in the context of the draft budget for 2020, continuing to promise everyone everything. In essence, he said exactly what he had said a year ago, along with many others, but the people's reaction to the same words turned out to be absolutely the opposite. In less than a year, the post of head of government was enough to make many people of different levels of power convinced that he was a liar and a swindler who should be overthrown.

No one can say it for sure now how it would have been if things had been different - if Covid-19 had not appeared in early 2020 along with the money behind it, which gave K. Kariņš's words in the autumn of 2019 a new meaning, and made him seem almost clairvoyant. As a result, him staying as the leader of the government until the elections in less than a year now seems safe.

A side effect of Covid-19 is also a slight slowdown in the decline of the number of newborns from more than minus five hundred every quarter in the second half of 2020 to "only" -372 newborns in the second quarter of this year.

The series of data published by the Central Statistical Bureau currently ends in June, when the children born were conceived in October last year, when the respite from Covid between the two states of emergency continued. Then there was the removal of some restrictions, Covid support payments for the past forced downtime and just warm weather. In hindsight, this explains the curvature of the birth curve in the direction of increase.

The state of emergency was declared for the second time on November 9, 2020, and reinforced by a curfew from December 30, 2020, to February 11, 2021. Many restrictions remained even after the curfew was over, and some have remained after the lifting of the state of emergency on July 4. We have to wait out September and wait for the data in order to be able to evaluate whether the curfew was a favorable position for sex life, or the opposite, that such methods of self-preservation of the existing power make people not want to create descendants who will have to live in Latvia and the world at large.