The Latvian army firing blanks may one day not be enough

"Most civilians support their army and will work with it in a crisis situation. But some won't, and some may even act against it,” wrote my colleague Imants Vīksne.
15.09.2021. Elita Veidemane 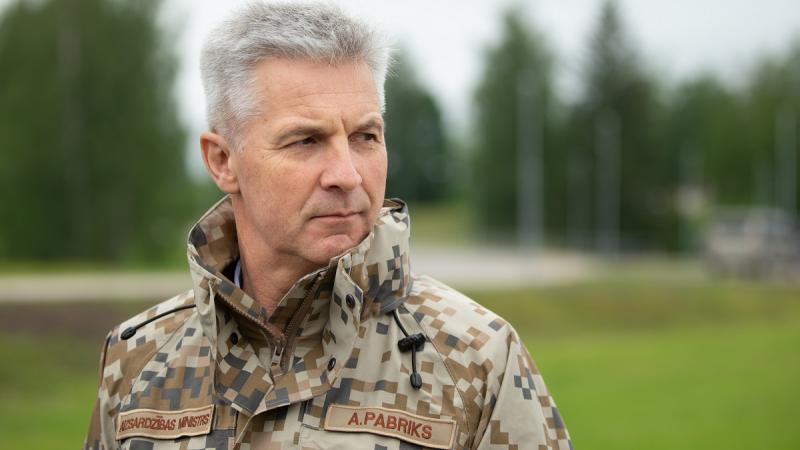 The whole article can be read here. Such reflections arose after the end of the active and public phase of the military training Namejs. I will admit, I, like many others, was initially bewildered by these war games in the middle of the city. But later I realized: it is necessary.

"This is one of the largest exercises involving about 10,000 soldiers. This is a large number for the size of Latvia,” said Minister of Defense Artis Pabriks (Development/For!, Attīstībai/Par!) in a telephone interview, “these exercises have been planned in advance, and Namejs takes place every year. We test various methods of protection in this exercise. The 1st Brigade of Riga was actively involved, and one of our tasks was to bring these exercises closer to real life, because such urban battles have also taken place in Ukraine, Georgia.”

Currently, a military base is being built in Skrunda, which is designed specifically for urban training. But you also need to train in a real urban environment. "It is about learning about our environment and conditions because we will fight - if necessary - in our own cities," Pabriks continues.

The fact that there was a mess on the social networks in connection with this military exercise was, in fact, surprising, as information about the event was widely available, and there were many warnings and calls not to go into the "battlefield". In addition, there were soldiers at the training sites, who informed the passers-by and asked them to choose other routes.

If some people really looked for another route, others, on the contrary, jumped right into the fray. The video with the woman and the child, who, incidentally, was urged not to follow her chosen route, seemed particularly impressive. Of course, she was brave enough to allow her little child to be scared by the firing of blanks... This footage was successfully used by Kremlin propagandists to tell that "Latvian army has organized shooting in the streets of Riga", see how unprofessional they are! However, this episode should be studied more: it might have been a provocation played out especially for the Kremlin's "journalists". But it could have been different, and perhaps no one would have had any problems if the soldiers had accompanied the stubborn mother past the "line of fire" to a completely safe place.

But when it comes to the importance of military training, Pabriks continues: “Such urban training is unlikely to happen in Western Europe, because there is little thought about defense. Especially for self-defense purposes, because who would think that Rome, Berlin or Paris could be threatened? In turn, we need to train and learn in a way that suits our interests. It is not for nothing that we are talking about 72 hours of preparedness, about comprehensive national defense. Civilians need to get used to the fact that training is necessary because in real life too a real military crisis can happen. There is no point in evacuating half of Riga, we have to learn when people are in the city.”

On September 9, the joint Russian-Belarusian military exercise Zapad - 2021 began, which will take place in the military bases of the two countries' Western war zones, including the Baltic Sea, simulating a large-scale military attack on the Baltic States. The training will involve about 200,000 soldiers, 80 planes and helicopters, as well as 15 ships and 300 battle tanks. When military exercises of this scale take place, neighboring countries are always preparing more seriously. Of course, the balance of power is... disproportionate, but, as they say, it pays to be prepared. That is why Artis Pabriks states: “We are currently sufficiently prepared. We do not see a military threat."

However, in the field of defense, I think we need to think more not only about how to physically fight in the urban environment, but also about the fact that there is a part of society that will not support the Latvian army, but - on the contrary - do everything to harm it. Consequently, to harm the whole country. Support for the Latvian army will not fall from the air like a miraculous basket of autumn gifts: we will need to pick those pears and apples ourselves, i.e., the military themselves will have to popularize the Latvian army, making it closer and more understandable to civilians. Because firing blanks may one day not be enough.

Breath of freedom in London - without QR code scanning and face masks
LSLīva Sila
NATO foreign ministers in Riga are unlikely to signal that the West will not fall for Putin's bait
BLBens Latkovskis
A new monument to the occupation army has been placed in Kurzeme
Imants Vīksne
Belarus is a cover for a wider Russian plan
Imants Vīksne
Once the money spending machine is started, it's hard to stop
BLBens Latkovskis
'Covid test tax' will also be collected by a company founded in spring this year
MKMāris Krautmanis